Aysh finally finished the third flower for the  Jan Stawasz bouquet, although it wasn't the flowers, but the leaves that took so long. She's hoping that they will hold their proper shape once they're washed and blocked. She tatted the motif from Lyn Morton's book called Water Lily. which she was hoping to use as a brooch for her coat but it was too large, so she has another idea for it.

mb duke has been working diligently on Renulek's Spring 2014 doily and thought she was doing good to get to round 5. The shuttle in the picture gives an idea of how fine the thread is to give such a delicate doily. Here's a close up for detail. 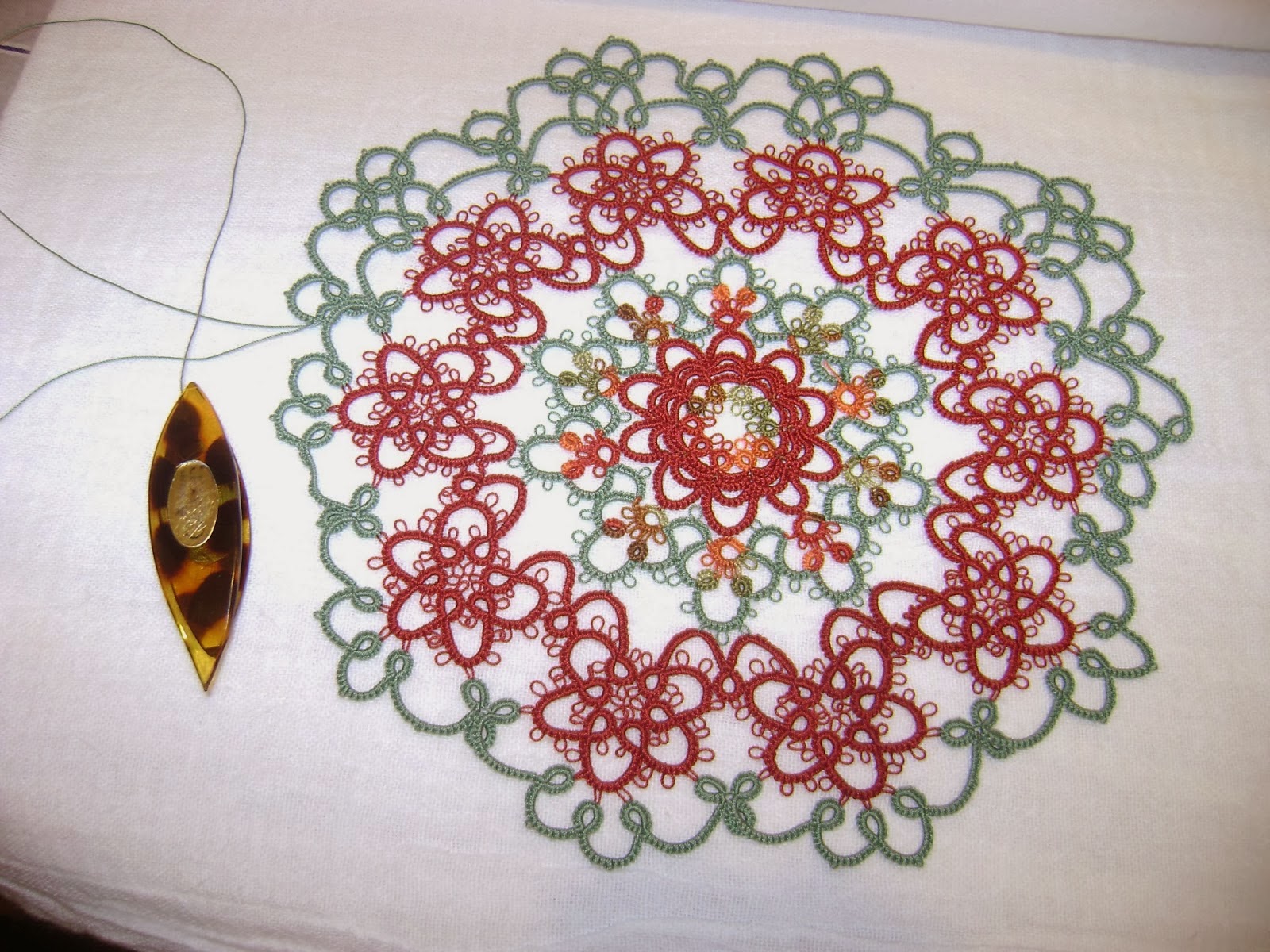 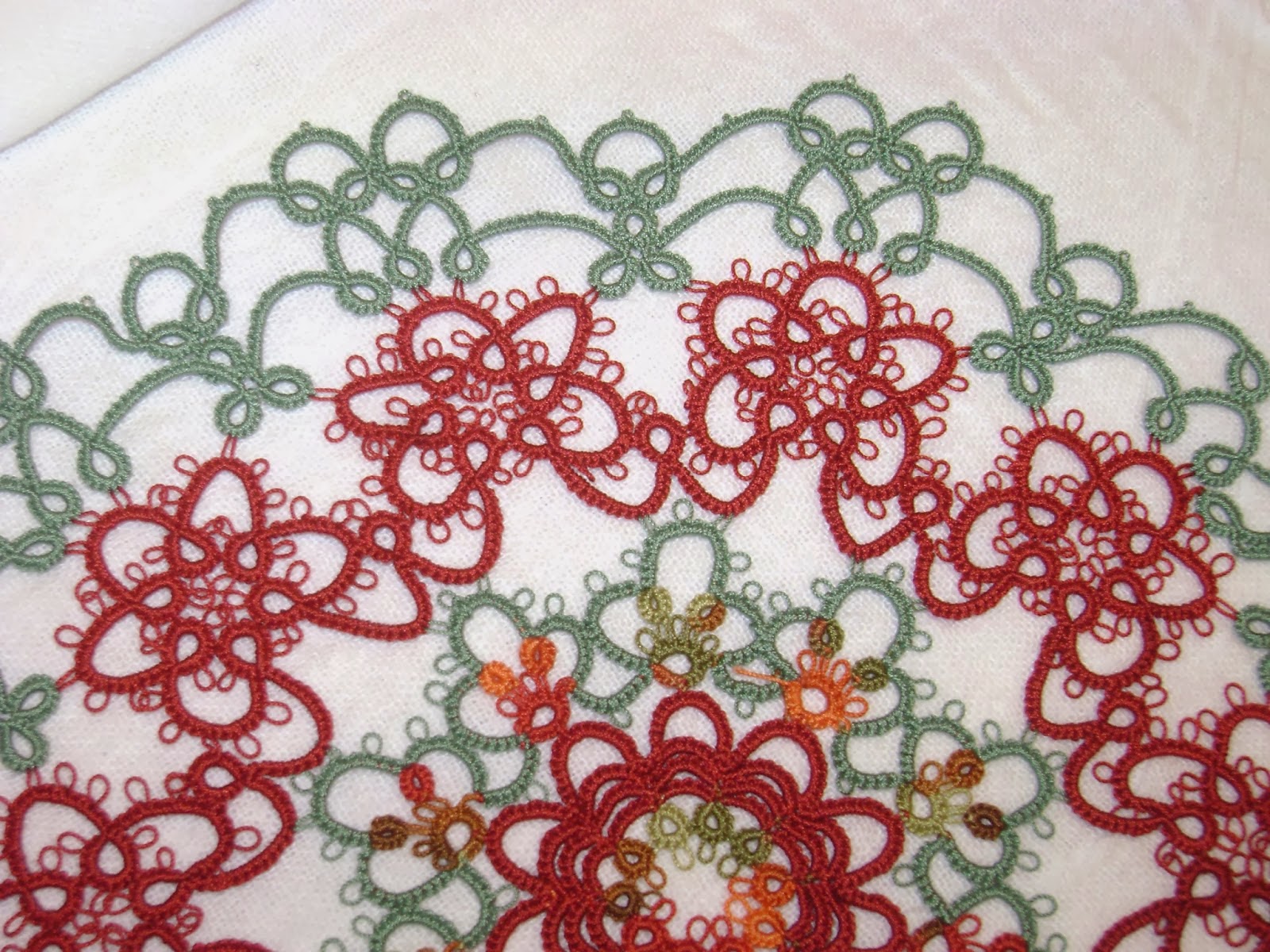 Diane has given her new shuttle a workout tatting the bookmark on the back of the package. Her third graders are doing amazingly well and what is most encouraging is that these are top of the class kids who  have finished their schoolwork early and have the time to practice tatting. Of course the subtle bribery of getting to take home a motif from Diane's tatting tin is certainly encouraging them. Diane had decided on Labor no. 10 from Frivolite 1 Creaciones Artime as her next project and she has rows 1 and 2 completed. That's not a pile of thread in the picture, it's a chain that's over 8 feet long tatted by Paige, one of Diane's 3rd graders. Well done! Those motif rewards are paying dividends. 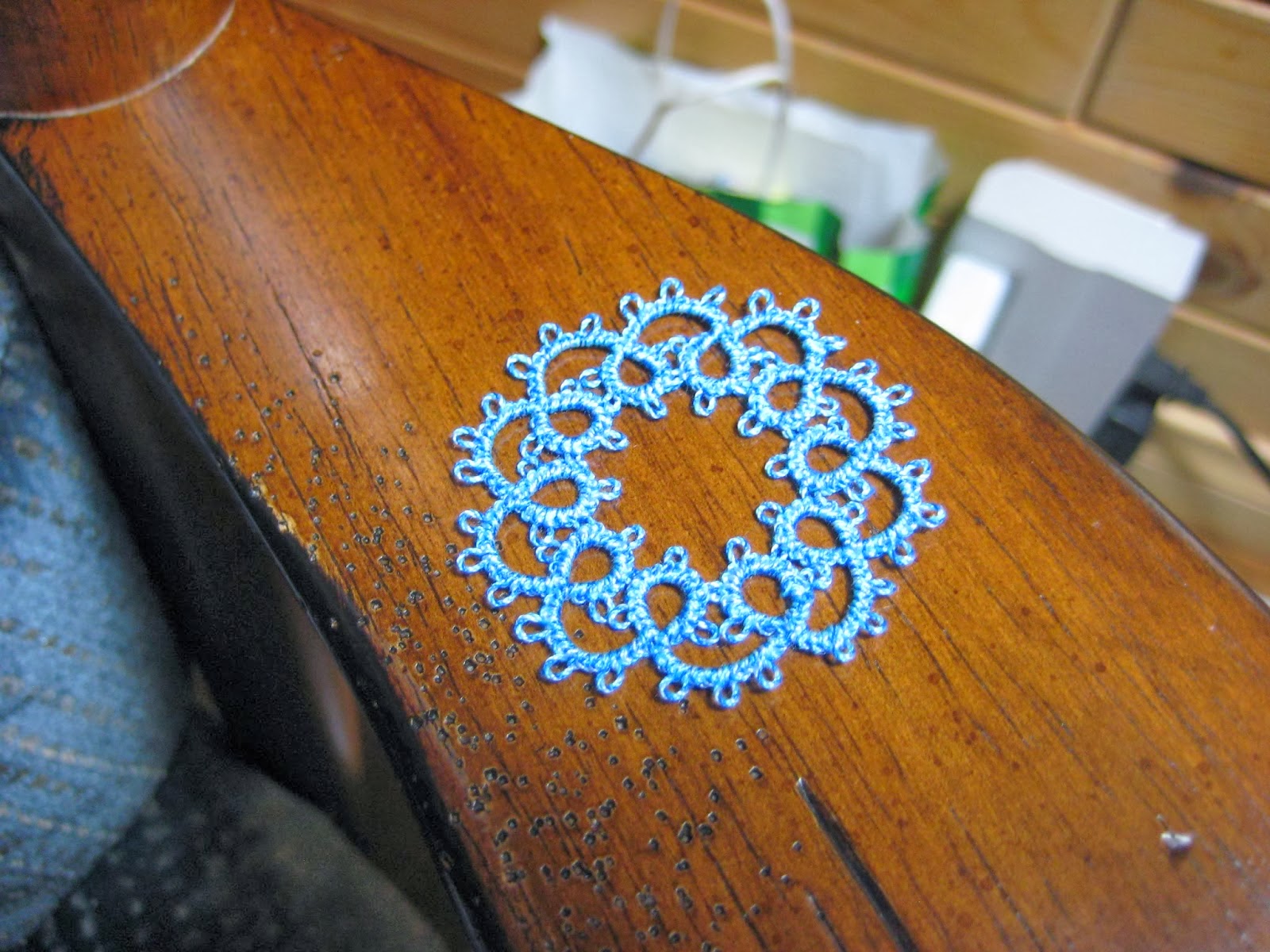 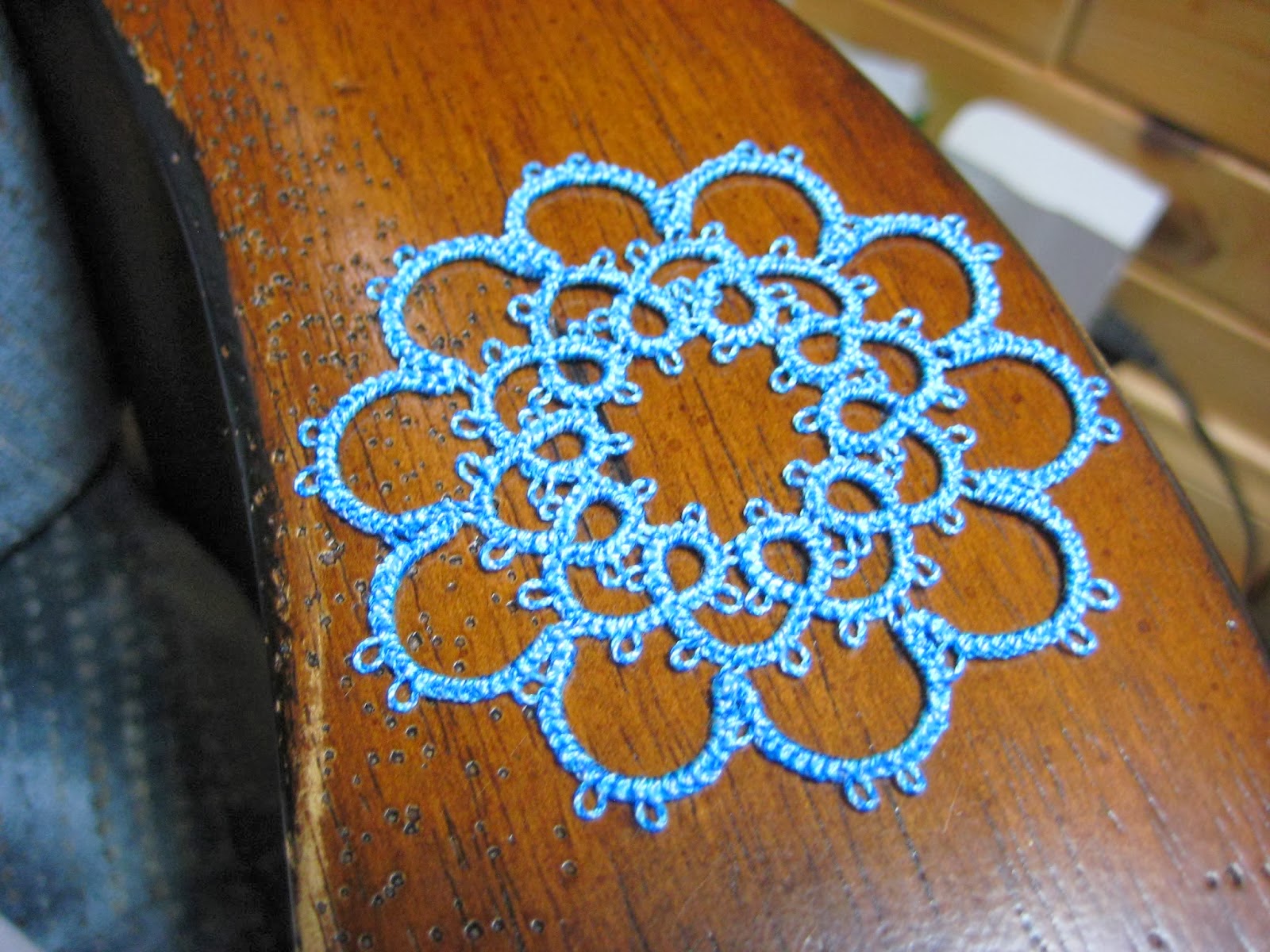 Fox added solid green DMC for the chains on Renulek's Spring Napkin to lighten it up a little. She is pleased with the way the dds worked for her chains on the first row of the Lucky Clover Doily. 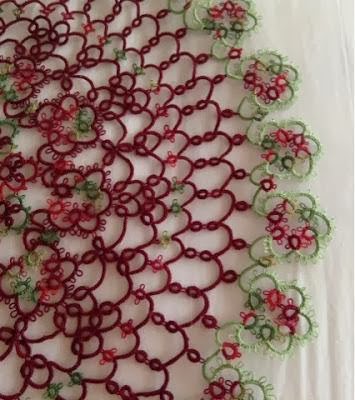 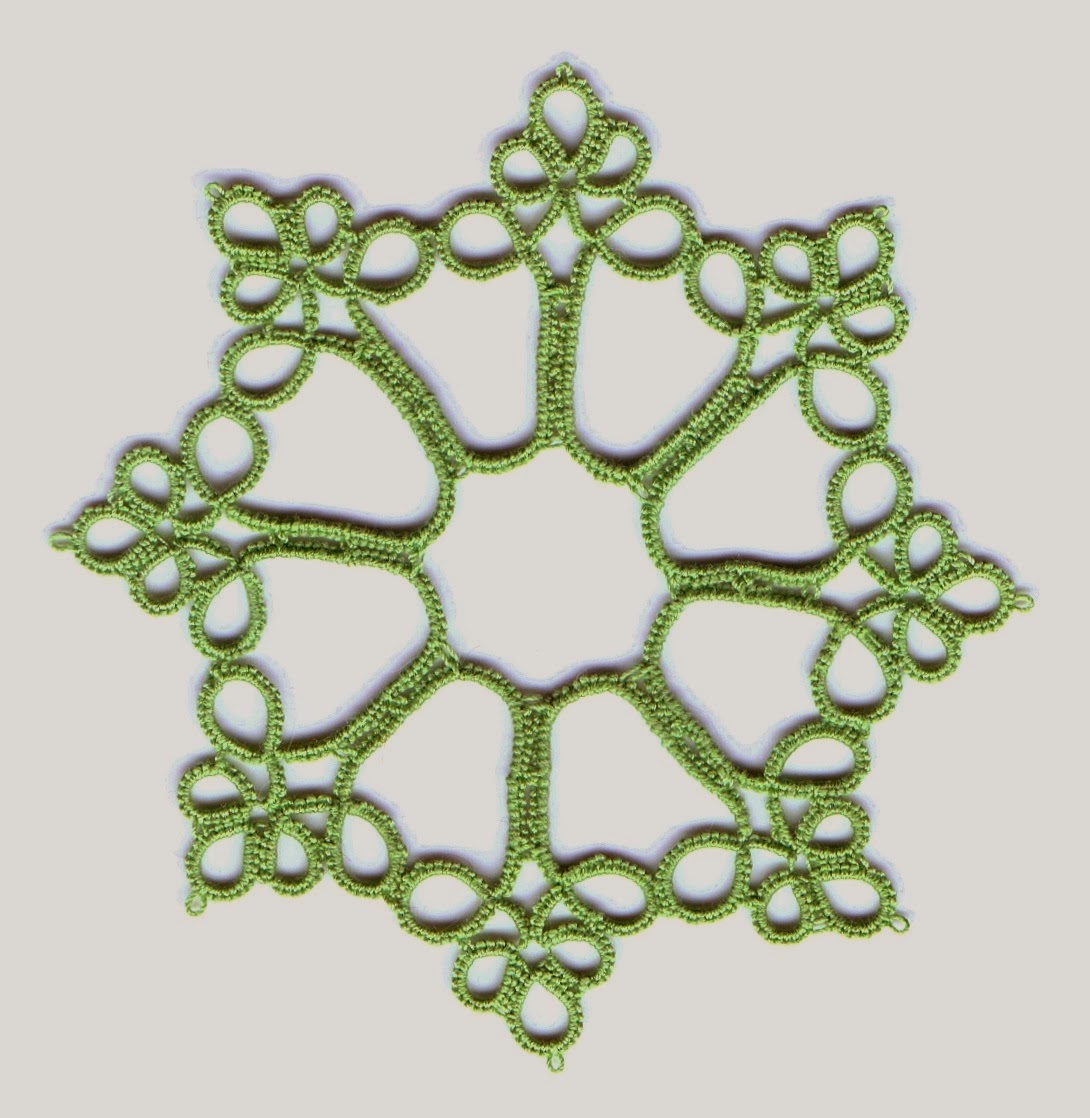 Margaret discovered this tatted window decoration that she did years ago using patterns from an Anna magazine. The basket and the handle are done with split rings, with the flower motifs all sewn individually onto the net and with some beads in the middle of the flowers. 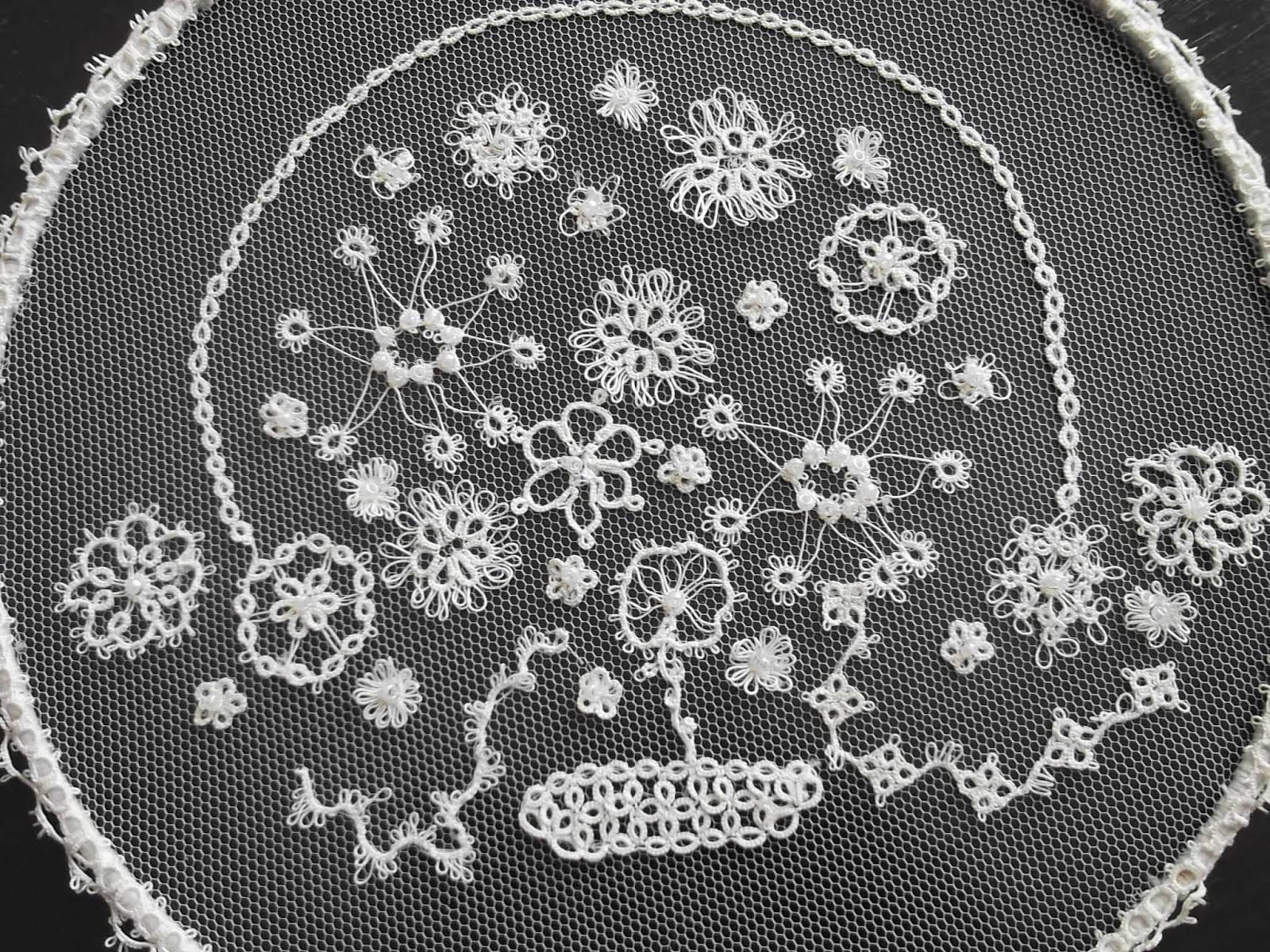 Marie has her doily blocked now and on display where it can be admired as a work of art. 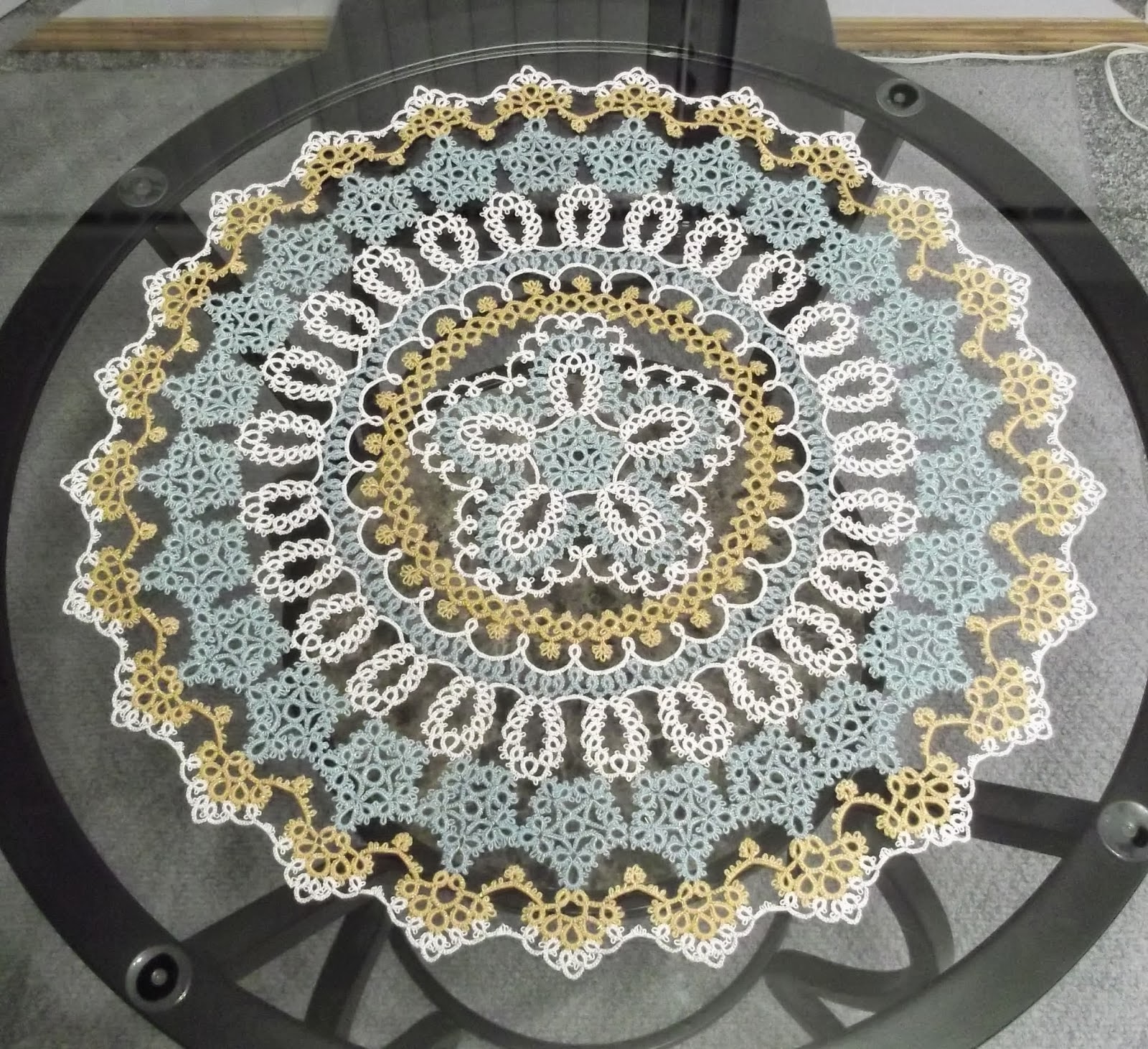 Mica has finally finished the butterfly doily. She did the centre part and then decided to do all of the butterflies in production mode so that they would all be completed at the same time. Now that it is finished, she doesn't like it, and the butterflies that attracted her to it in the first place, are the part of it that she doesn't like. Maybe it would look better if they faced out instead of in. 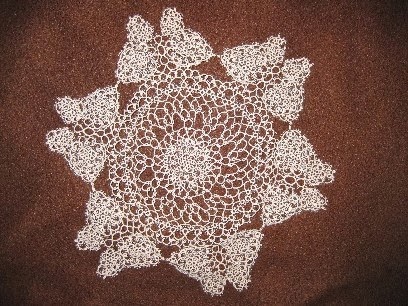 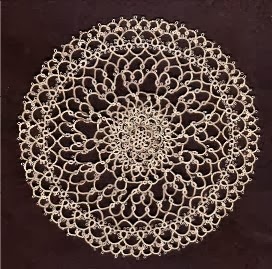 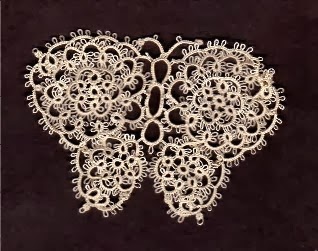 Michelle thought she hadn't been doing much tatting until she counted up all of the crosses she has finished. That makes 22 done and 5 already given away in a riot of colours. That's a lot of bookmarks and a lot of tassels completed. 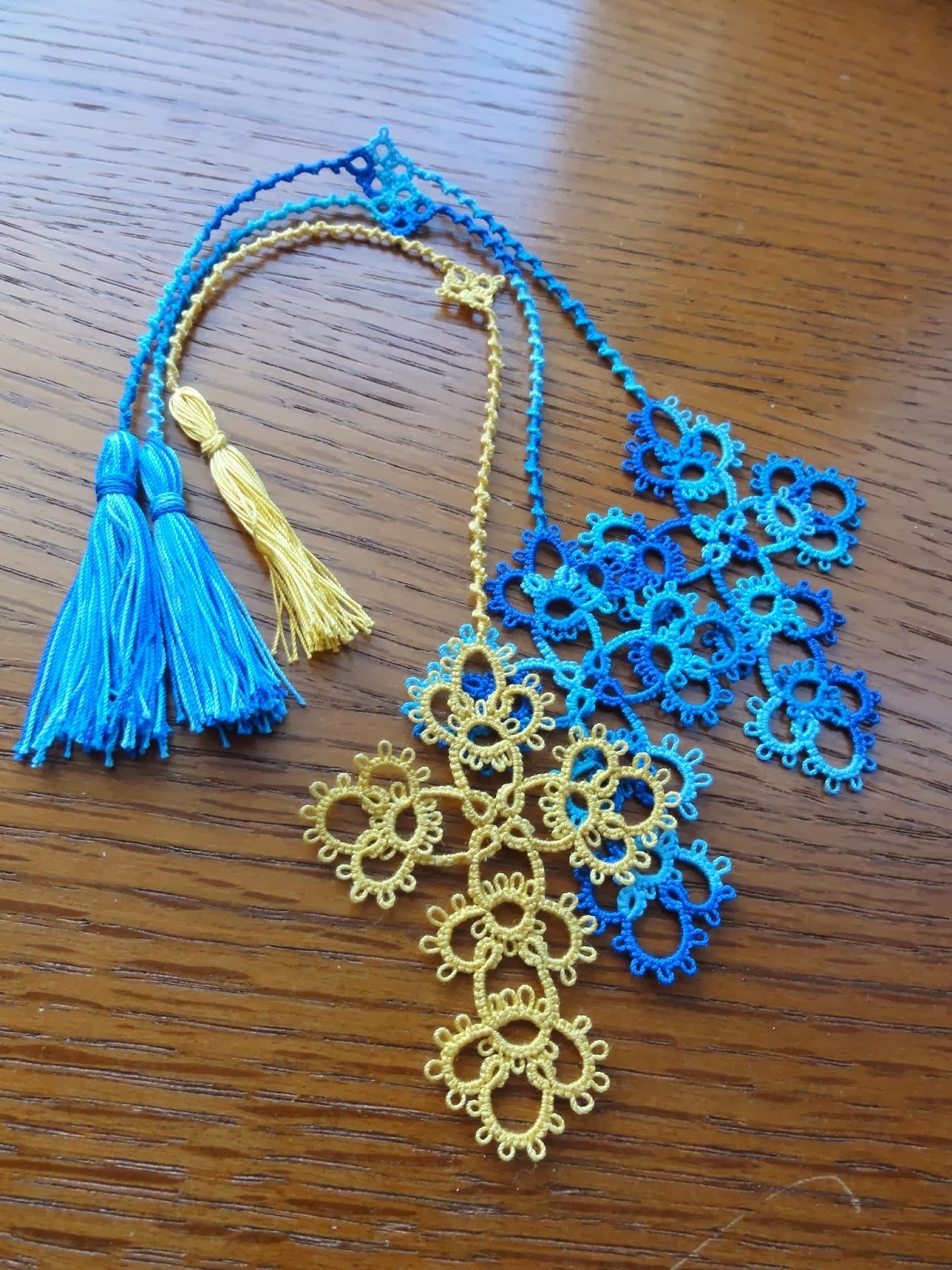 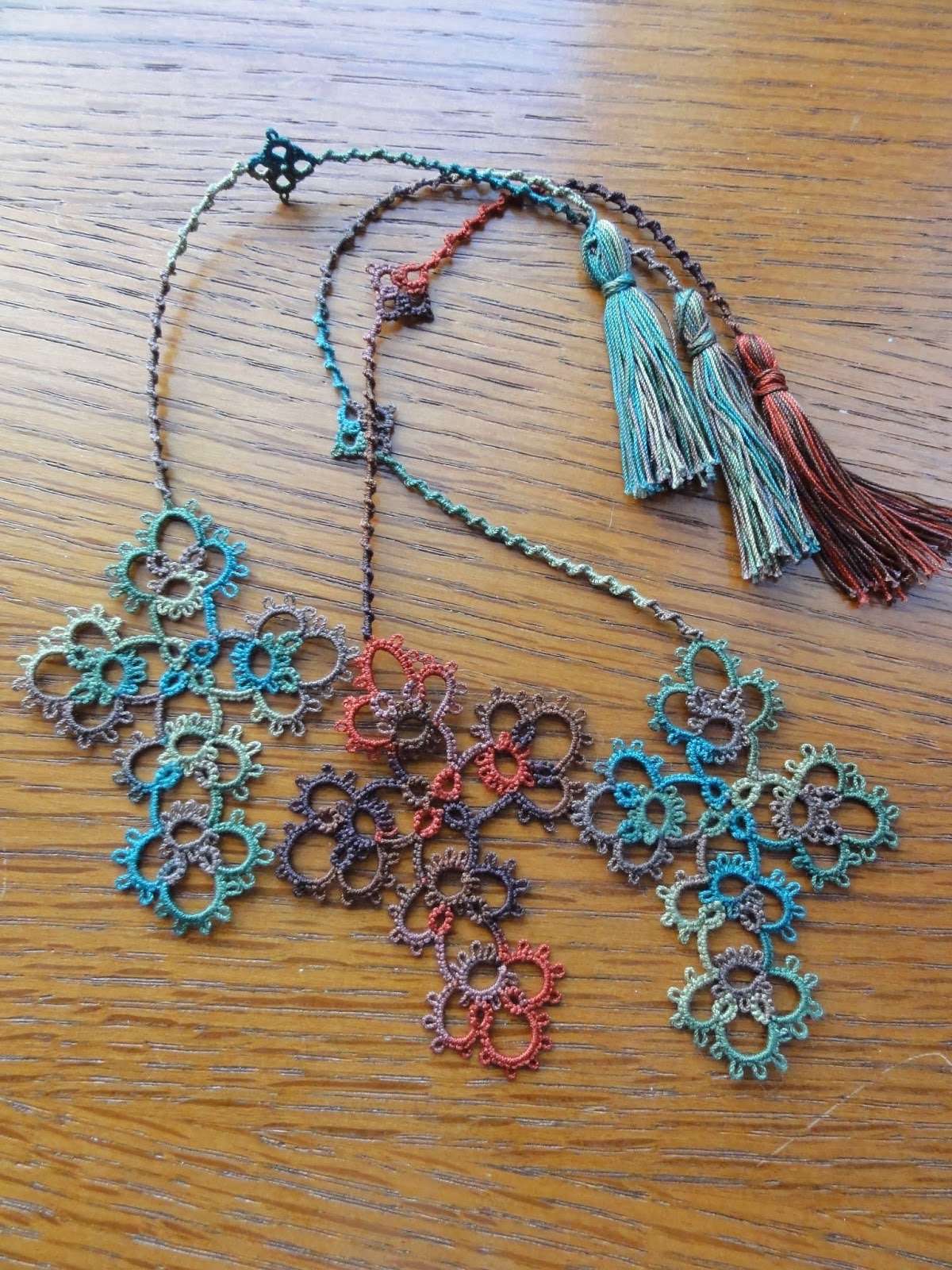 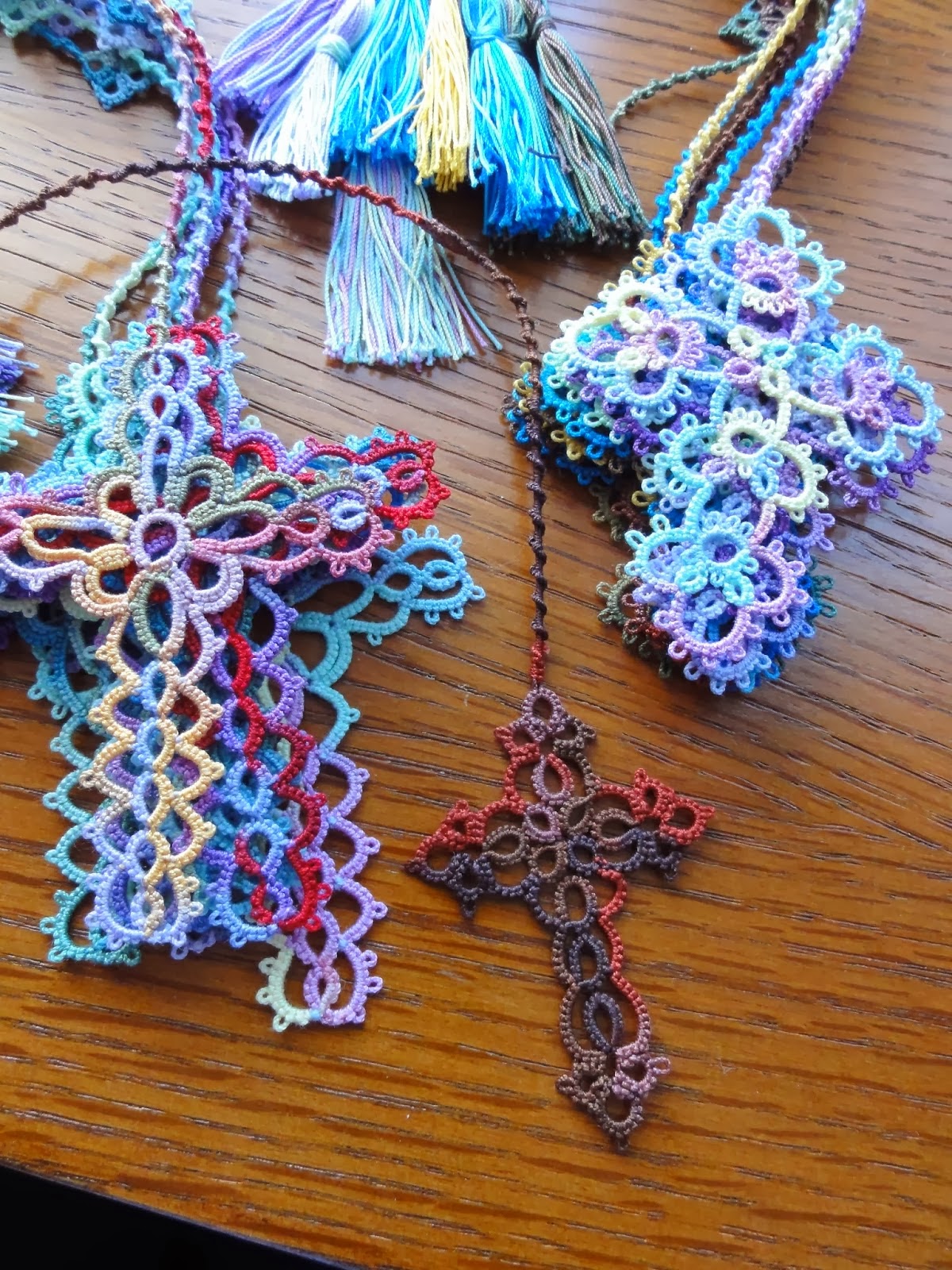 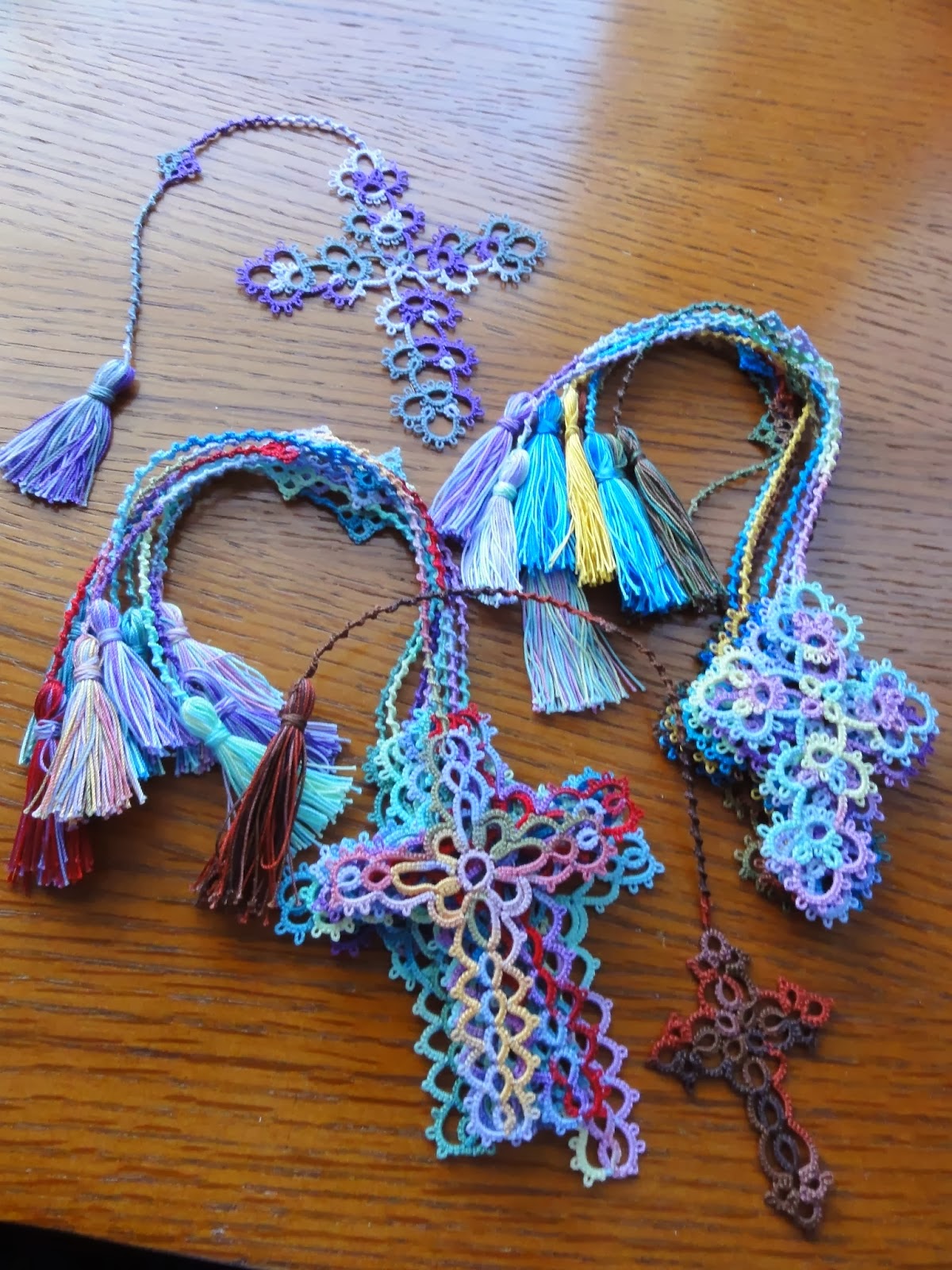 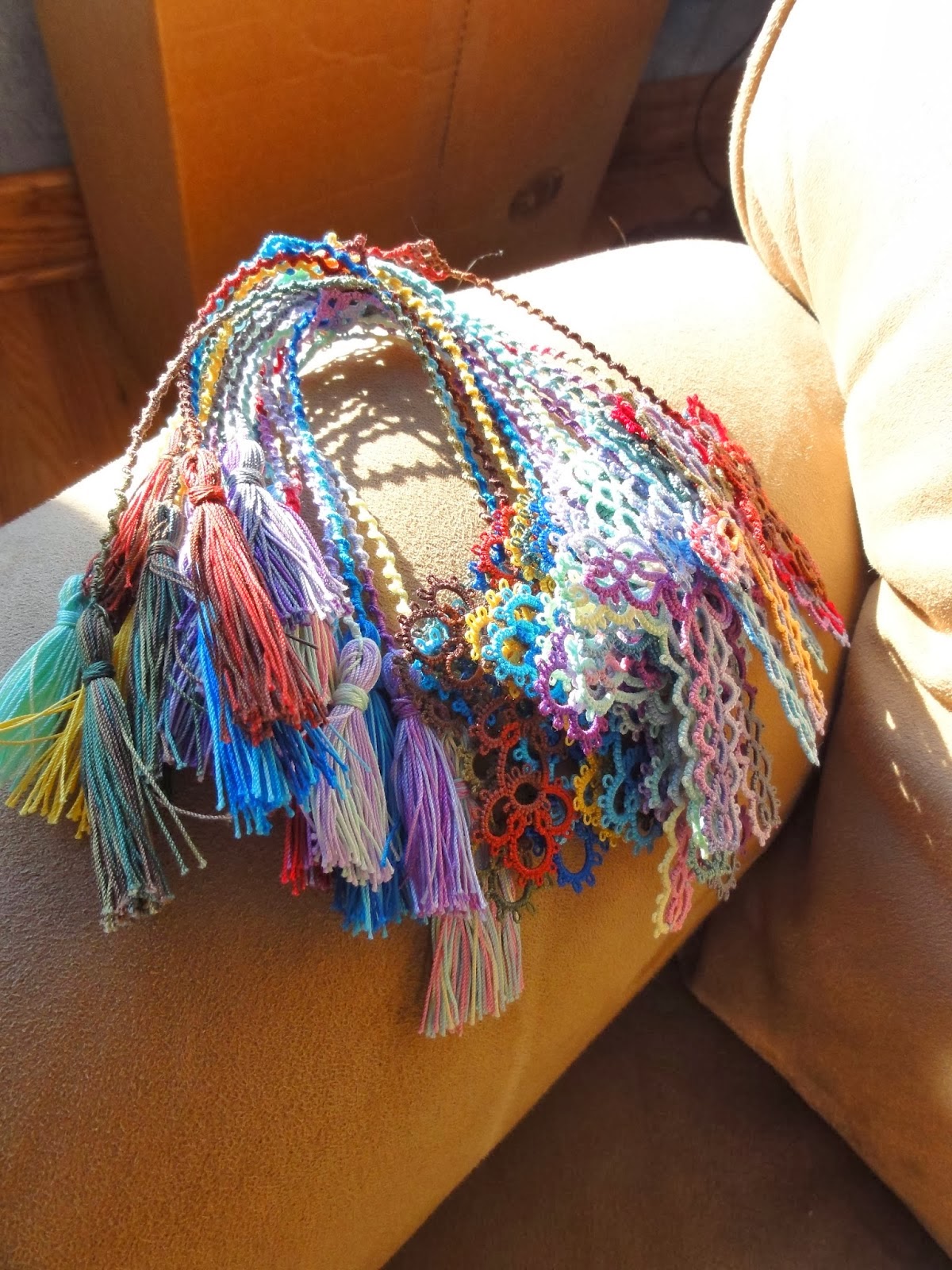 Sue tatted another of Sue Hanson's Val's Suncatcher pattern in size 40 Lizbeth Island Breeze with blue plastic beads. Using up the left over thread on the shuttle she tatted Kejora from Tatting with Rings by Jon Yusoff. 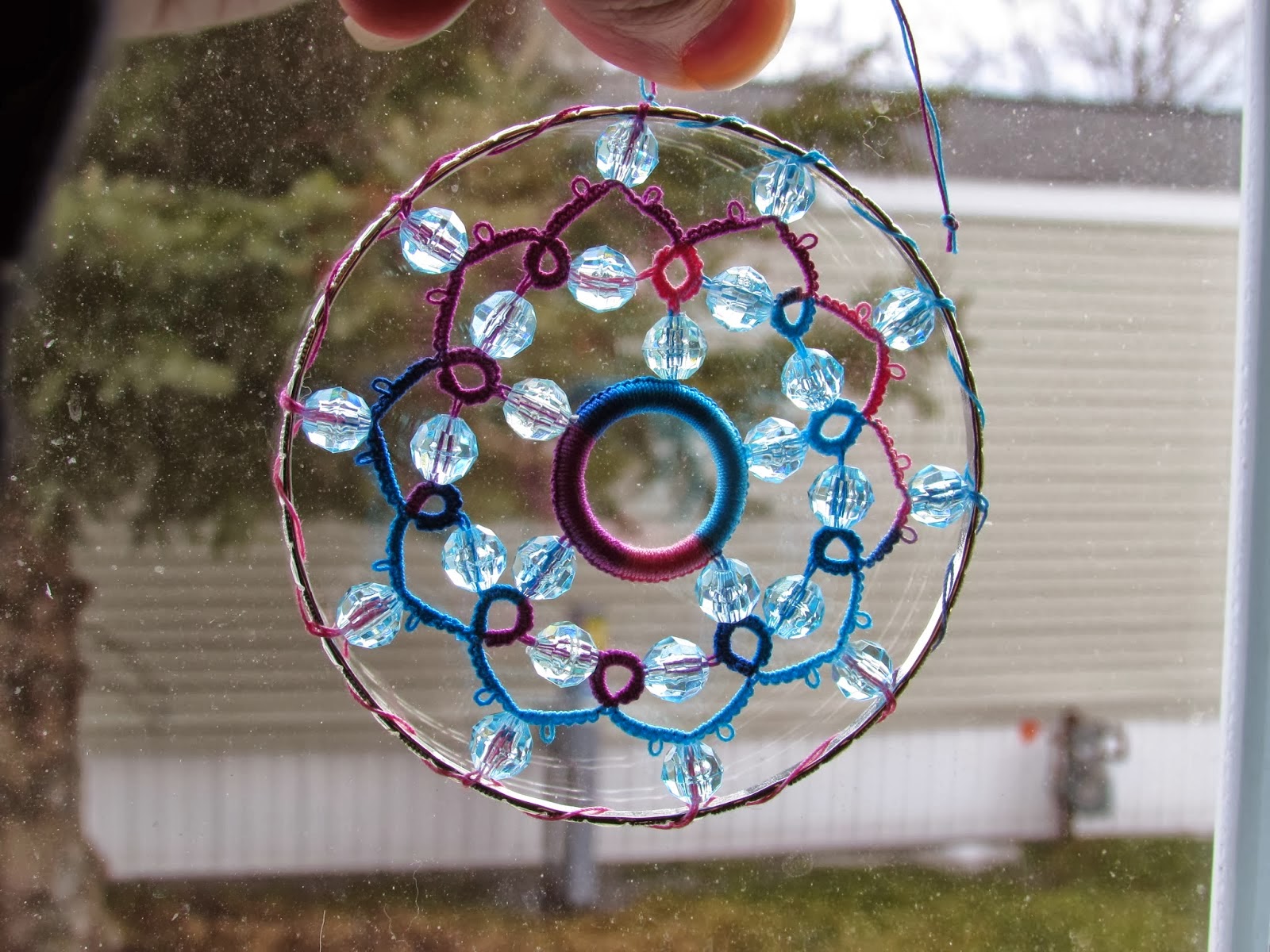 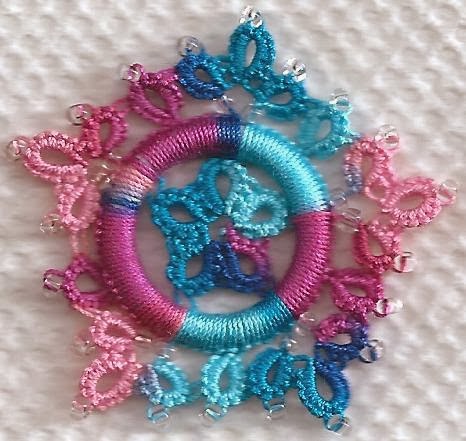