Debbie has joined the challenge. Here are the Floret Earrings using a pattern by Marilee Rockley and the Classic Edge Bracelet also designed by Marilee. The blue earrings are made with crochet thread and seed beads, while the black bracelet and necklace are made with Finca No. 5 thread. 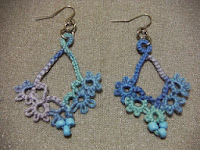 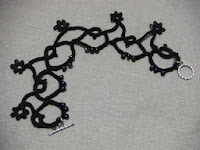 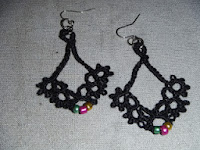 Carrie tatted Kersti's Stumpy bookmark in Southmaid, a variegated pink, size 10. She started another one in Aunt Lydia's size 10 thread in white, but got a little side tracked and decided to just go with it. In the end she had a new design that she's calling either Dadratted Heart or Criminy!. Maybe alcohol and tatting together aren't as good a combination as chocolate and tatting. 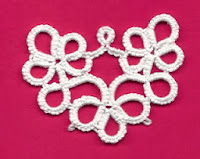 Diane reports that Doily 4 from Tatted Fashion by Teiko Fujito is now 9" with two rounds to go. She only has seven pattern repeats done, but she loves the way this round is looking. 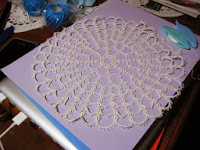 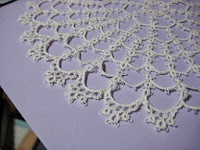 Fox presents Milena, a one round wonder by Iris Niebach from the little publication Tatted Doilies. It's tatted with Sulky which she had so much trouble with earlier, but she tamed it and it finally submitted. 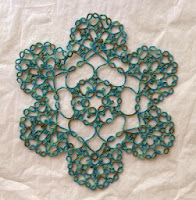 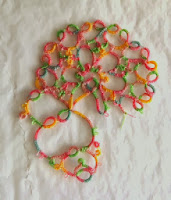 Marie was inspired by Corina's Beaded Flower to make this bracelet in Lizbeth, size 20, gold and purple dark, which was tatted in one round. Then she used it again as a basis for this Royal Cross which was tricky to tat using 4 shuttles.

Martha adopted a problematic CQ block for the Palmetto's fundraiser and found an ingenious method of fixing it. Of course she also added lots of tatting embellishment.

Wanda spent some time travelling and chose a simple pattern to work on as she was tatting in the dark.