mb duke received a lovely package from England full of tatting treasures including a tatted button pendant. She made this snowflake pattern by Renulek using Altin Basak white/silver metallic size 50, but, as you can see there's a mistake in it. This one will go on the back of the tree and she'll make more as gifts. The snowflake from DMC's Festive Tatting and is also done in Altin Basak in white/silver metallic size 50 and it came out perfect. 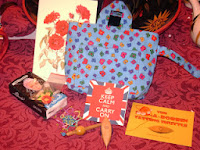 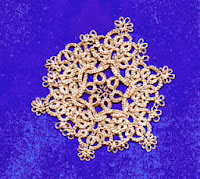 Barbara tatted another motif designed by Jon Jusoff working in size 40 Lizbeth thread #694 which is a finer thread and nice for a change of pace. 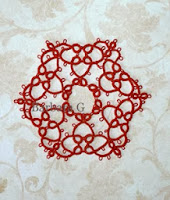 Ginny has finished her tree and fully decorated it is set up the museum. The museum opens for the tree festival on Dec 1. 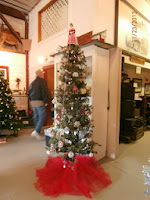 Nancy has more pictures of beaded Christmas trees to share.

Diane's goal was to have this doily done by Thanksgiving but with each repeat of the last round taking over an hour, that doesn't look like a realistic goal. She's got one quarter of the round done and no time to blog, she has to tat! 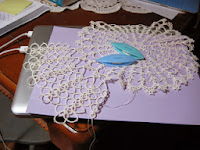 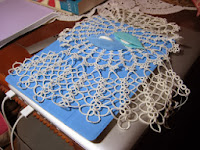 Fox is working through Iris Niebach’s Eleonora using Sulky thread that reminds her of Lizbeth's Vineyard Harvest, which is one of her favourite colours. She wanted just the right colour to match this hanky and she thinks she found it in a Sulky Blendables thread which works well with this pattern. Here is Eleonora completed and it's biggest challenge for Fox was the joining of the chains. Vinnie’s Spring Doily has a similar joining of two chains as Eleonora. As a break from the edging, she remembered this seasonal motif done in size 40 Lizbeth but she's having trouble attaching those JKs with a shuttle join to the space before the JK and after the last ds. Her next try at the wreath is better, but still not what she wants. 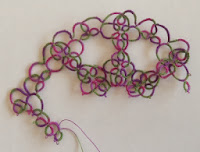 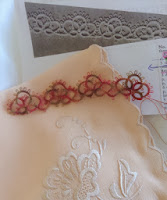 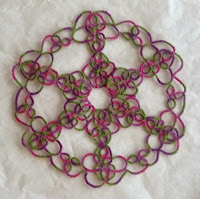 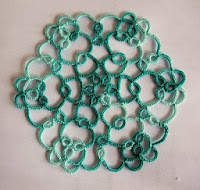 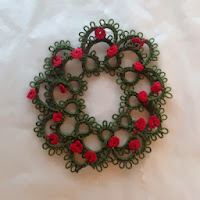 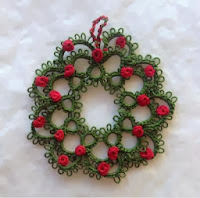 Kristen received her exchange package from Vicki which included these marvelous tatted motifs. She has been doing some holiday tatting in preparation for teaching her second tatting class beginning with the Little Ring Snowflake from Vida Sunderman's Tatted Snowflakes, tatted in size 80 DMC. Also done in size 80 DMC, Snowflake 5 from Festive Snowflakes and Ornaments edited by Barbara Foster. This is Lizbeth Wedgewood Dk (#656) size 80 used for the Cloverleaf Bell from Monica Hahn's Christmas Angels and Other Tatting Patterns. Her final snowflake is from a Russian book and is on it's way to someone in the US. 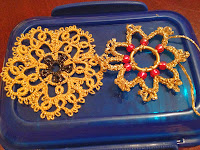 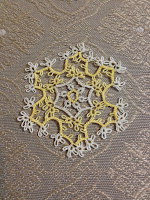 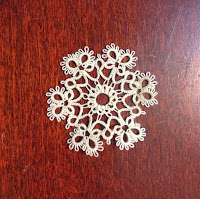 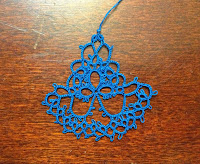 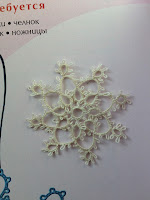 Marie designed these shuttle cases to protect her sterling silver shuttles. The first 2 were made in size 80 thread and the green case was made with size pearl cotton #12. This broken broach she found at an estate sale was tatted around in Lizbeth, size 20, in Antique Violet. 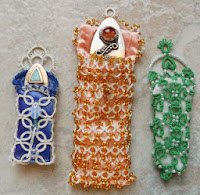 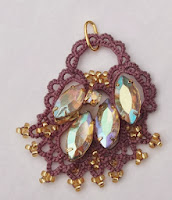 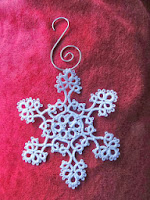 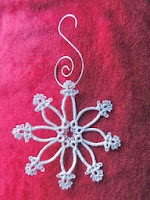 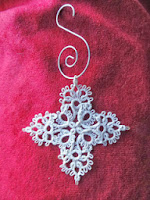 Orsi shows us her prodigious tatting, dozens of motifs and yards of lace and finally an amazing collar. 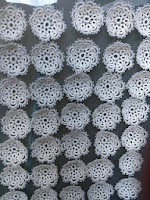 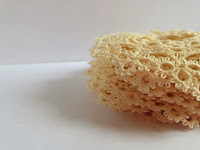 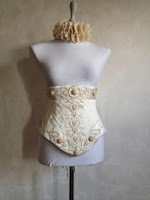 Lovely tatting everyone! Please add me back to the list of links. Didn't post for a bit but now I've finished my challenge. Thanks. http://mistenetats.blogspot.com/