Nancy has been tatting Candy Cane ornaments to go in Christmas cards and a 3D Christmas tree encrusted with seed beads. 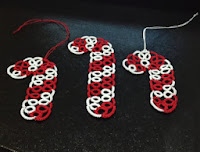 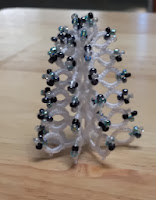 Linda loves the challenge of doing Nancy Tracy's Tatted Doily, an oblong design, instead of the traditional circle. She found the side ends a little tricky requiring concentration. She had all these bobbins filled with left over size 20 thread so she's been making these 6 ring motifs and joining them together. If she keeps at it long enough she might end up with a tablecloth or bedspread. 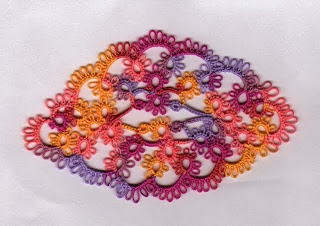 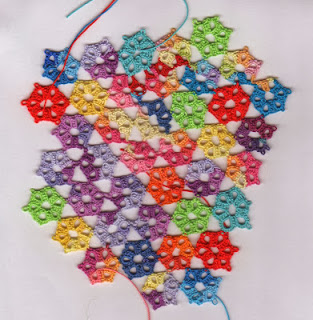 Ancolie has finished another 25 motifs! Congratulations and keep it up.

Diane has the penultimate round completed. This is the start of the last round, but those pattern repeats are enormous. It's going to be slow going on this doily when each repeat is taking over an hour. (It's at this point that I start chanting 'don't make a mistake,  don't make a mistake..') 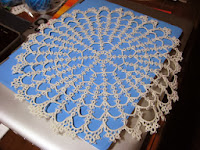 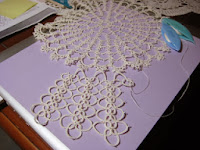 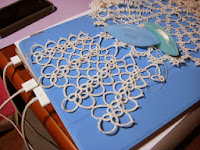 Fox tatted Nancy Tracy's motif yet again and she's wondering if the thread is why it doesn't look as symmetrical as she'd like. She paired some orange beads she received from Miranda with some HDT from Monica. The Lilac thread came from Ladytats. She's working on a new pattern, tatted in Sulky. Dahlia, by Karey Solomon which she worked in HDT and orange beads was fine until she hit the middle. She kind of did her own thing on the 6th row and it seems to have worked, but she's not convinced she worked it as intended. Of course part of the issue is that she's working in size 80 on a pattern that's intended for size 20 as you can see in the picture with the shuttle for scale. This purple motif, by Kirsten Christensen,
using #40 Lizbeth, is the same size as the #80 piece. She's loving the look of this piece done in Sulky thread. 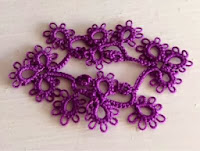 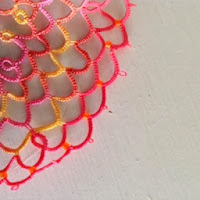 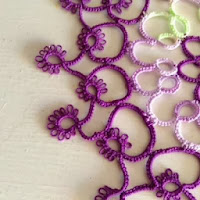 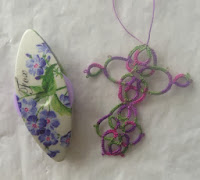 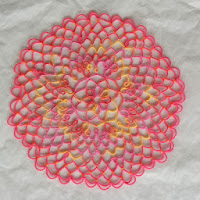 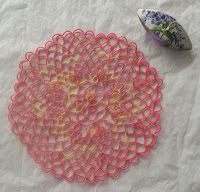 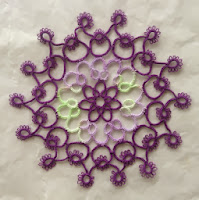 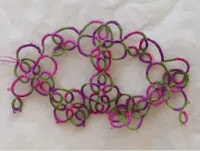 Kristen has been traveling which hasn't left a lot of time for tatting, but she did manage this heart done in size 80 DMC, although she doesn't know the source of the pattern. She has also been working on this edging in Perfect Quilter thread. 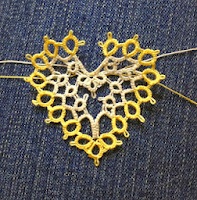 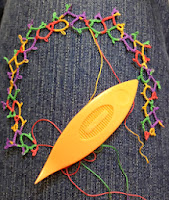 Marie found a broach at an estate sale and added tatting in pearl cotton #12. The pillowcase is a birthday present for her niece using an edging is from The Peacock Book and tatted with Lizbeth, size 20, Leaf Green and Azalea. An edging for a wedding present, on a pair of pillowcases is done with size 10 crochet thread in gold, with a gold filament and white, with a gold filament using a pattern from The Tatted Artistry of Teiko Fujito. The Christmas ornament was tatted with size 30 crochet thread. 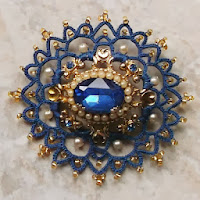 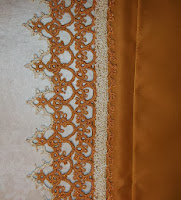 Wanda used Lizbeth #651 size 20 and the centre from from a previous snowflake with a little something more on the outside.