Dawn has just finished Sherry's TIAS and she has decided to join the 25 Motif Challenge. 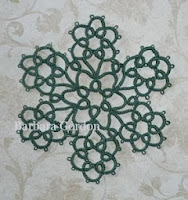 Lelia purchased doll dresses made from vintage hankies at the local doll show, which are perfect for Penny Wooden Dolls. 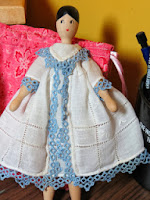 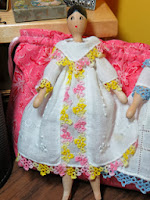 Ginny has finished the skirt for the angel and is now working on the collar. It's going to be awesome! 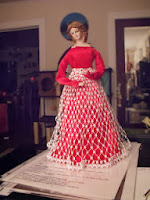 Marta created an tremendous notebook with a tatted cover that's like chocolate and orange with marzipan filling. Doesn't it look edible? 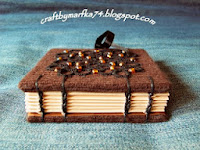 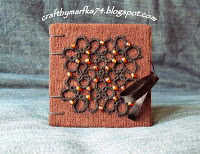 Fox at long last has the mystery doily completed. This monumental task includes 190 beads on the final round. It's just over 11 inches across done in size 40 Cebelia and it looks marvelous. Congratulations on sticking with it. 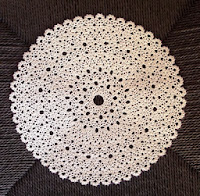 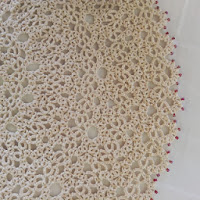 IsDihara is working with Lizbeth 40 Snow White thread using opaque white seed beads and a black bead for the eye to tat her version of Jane Eborall's dove. Jane's version is shown completed. 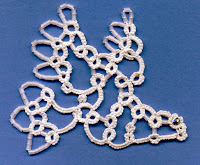 Margaret was thrilled when the package she had won from Kristen showed up on her doorstep. Included in the package was a tatted motif and a corner bookmark. 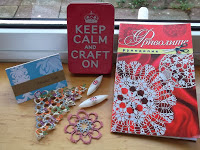 Marie utilized a pattern from Occhi Schiffchenspitze Frivolite (the peacock book), to make this necklace in size 20 crochet thread.  The earrings were a made-up pattern to go with the necklace. Corina's beautiful Beaded Flower was done with Lizbeth, size 20, Gold and Purple dark. The matching earrings were made with a smaller stitch count. 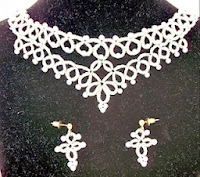 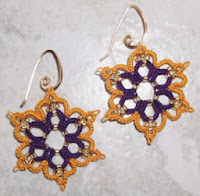 Wanda has been having a lot of fun decorating some more bags. A heart with a scattering of tiny flowers, a bird perched on the branch of a tree, another heart exploding with tiny flowers as a small butterfly hovers over a large flower and an apple with a sprig of leaves and a butterfly. Adorable and clever.