mb duke was privileged to win the Juicy Watermelon pendant from umintsuru. 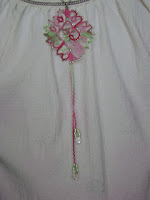 Sharon has been tatting lots and lots of flowers in response to a request from Georgia Seitz for a fundraiser for Palmettos. 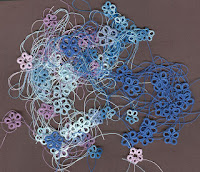 Diane found this Workbasket cross, strange to tat because the centre is added last. She worked it in size 20 Lizbeth #170 but if she were doing it again she would design a different centre.

Fox attempted a pattern by Kirstine and Inge Lise Nikolajsen that appears in Tatted Handkerchiefs. The new thread, which turned out to be about #100 was a perfect colour for the project, but much too fine, making it hard to close rings. She went on to a size 40 Lizbeth in ivory using the Frauberger Crown pattern, but she's not sure she likes it. This motif done in HDT by Yarnplayer in a pattern by Susanne Schwencke will head off to Peru. 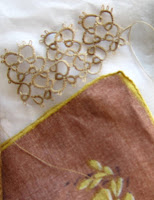 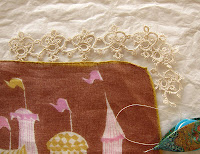 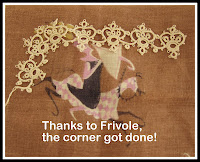 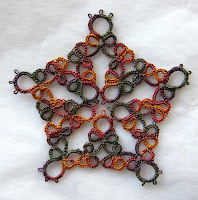 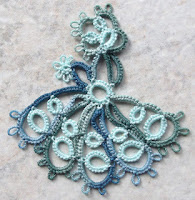 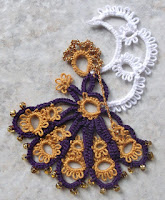 Michelle made this basket again because she just wanted to do split chains using Romanian "macrame" thread which was kind of stretchy and weird to work with. One of the teachers brought in some framed tatting from her family. The tatter, Aaron Kraft, pictured in the corner, tatted it when he was 90, and continued to tat until he was 95. The motif is her younger daughter's first piece with rings and chains. 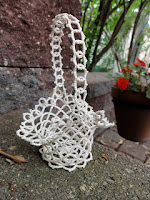 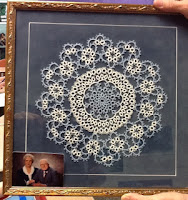 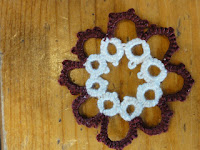