Barbara tatted Birgit's Simple Angel in Lizbeth size 20 in white and then again in colour. 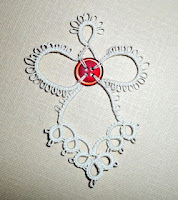 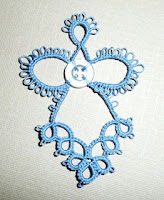 Meryl has completed round 9 of the Honey Napkin, but since it's going to take a long time to finish this project she has also been working on something smaller, the Pansy pattern from Priscilla Book 2. The first pansy was done following the instructions, but on the second one she decided to do the petals separately and join them later. 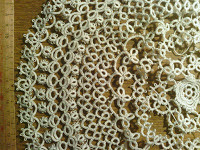 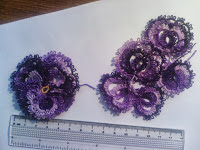 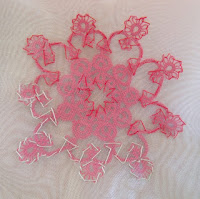 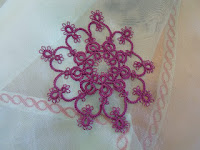 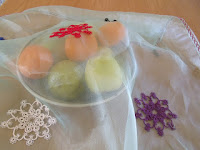 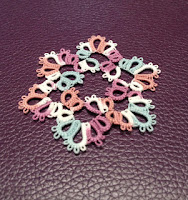 Linda has finished her CQ strip with lots of tatted embellishment. 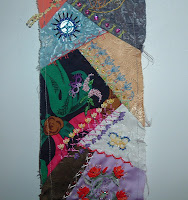 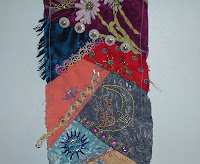 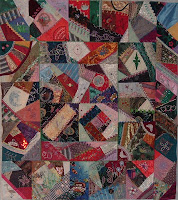 Cindy added some tatting to her needlecase to dress it up. She loved the shape of this Jan Stawasz Mirror motif, but she should have used size 40 thread for it to fit the second needlecase. Jon's pattern "Toshti" was perfect for working around the findings she discovered, but again size 40 might have been a better choice. 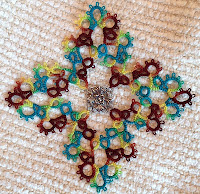 Fox is so bored with the pattern for this Jan Stawasz doily and she is so tired of the Finca #8 that she's not even going to finish the last section of the outer row. The doily as is, has been sent off to her granddaughter. She really likes Susanne Schwenke’s Spitzen-Kreationen done in #40 Lizbeth, from Rachael and she has plans to tat more. Cindy sent her a lovely needlecase, but she performed a little surgery on it as found it was a bit bulky. Here's a picture of some of the other goodies Cindy sent her. 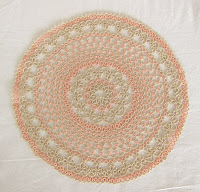 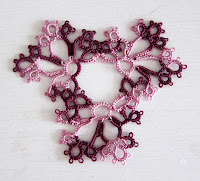 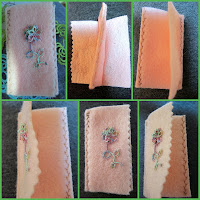 Jess used her Under the Sea HDT to tat Jane Eborall's Ferris Wheel motif. She's working on the wedding doily for which she dyed up this thread that she's thinking of calling raspberries. It's a better choice than the Olive Warbler she tried earlier. 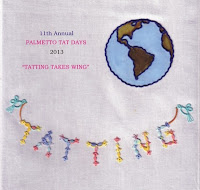 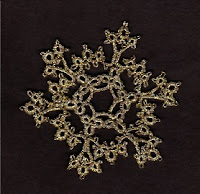 Orsi's tatting project continues. That's lots and lots of tatting. The winner of her tatting raffle is Margaret.

Sue tried out 2 variegated quilting threads wound with a solid green size 80 DMC to make this motif. She's not crazy about the resultant colour, but it does open up a lot of other possibilities. The 2 quilting threads together in this motif from the book Tatting Patterns and Designs from Gun Blomqvist and Elwy Persson is a better blend. The Tollway Tatters were an industrious bunch. Here's a display of some of Marilee's lovely tatting. Here's the Star motif from Tatting Patterns and Designs by Gun Blomqvist and Elwy Persson, done in another quilting thread. Rosalie, a Piney Woods Tatter pattern was done in Lizbeth Foam Latte size 10 with clear beads. After the finer than size 100 quilting thread, size 10 must seem like rope. 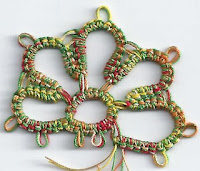 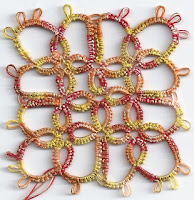 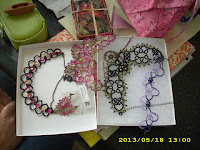 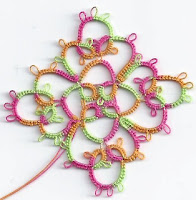 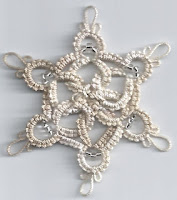