Carrie sat down and tatted Janette Baker's Heart from Learn to Tat in size 10 white for chains and pink for rings. 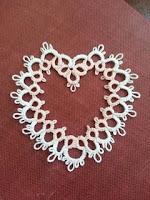 Laurie was asked to provide an item for the silent auction fundraiser for St. Francis High School, so she's making the Clover Doily by Eileen Stafford. So far she's up to round 3. 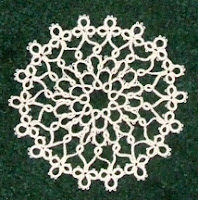 Jane made up this edging, using Martha Ess's folded ring technique using size 10 thread for the border of another towel. 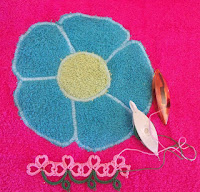 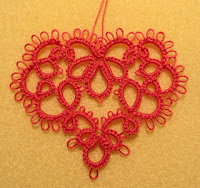 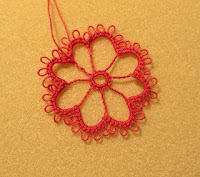 Kristen is pushing ahead with her shuttle tatting and has mastered tatting right handed, but it's not as neat as her needle tatting. She's having trouble getting her picots an even length because she can't see them under the pinch. (I usually solve the problem by pinching back from the last few stitches.) Still, her most recent shuttle tatted motif looks better than her first one.

Marta hasn't been blogging, but she has been busy and finally took time for a photo shoot of her recent work.

Cindy continues to work on the Jan Stawasz doily XI but their seemingly endless ring and chain repeats are hard on the attention span, but she's made it to round 9.

Fox has been playing around with Mary Konior designs while waiting for her thread order. She also took on another pattern by Sumi Fujishigi. 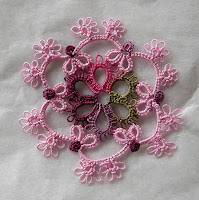 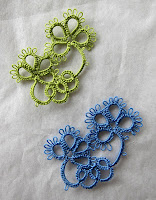 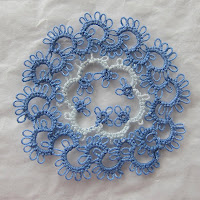 Margaret was thrilled with the pendant the she received in the mail from Wendy. 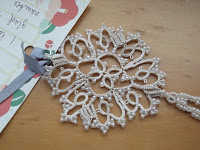 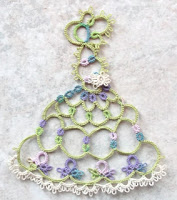 Martha has posted another tease, a Chinese dragon. 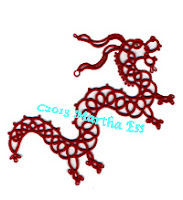 Mica tatted the swirl snowflake from Tatted Snowflakes by Vida Sunderman made in Kreinik braid no. 4 which is quite fine and she had quite a few difficulties with this thread splitting. 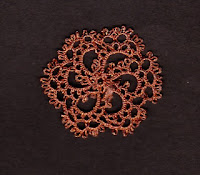