Carrie has just finished a marathon of butterfly making. All 31 butterflies in size 20 Lizbeth Jellybean will be mounted on pins as a memento for her daughter's class who raised and released butterflies this year. 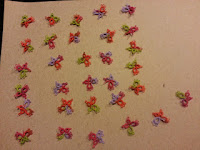 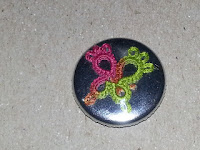 Jane tatted one heart of Martha's Two Hearts as one, just to fix in her mind how the heart was formed. The next attempt at working both hearts got messed up on the last ring of the first round, so she's setting it aside for now. She's working on the first of five necklaces, using Jess's Little Boy Blue thread and Cebelia she dyed herself. 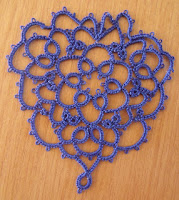 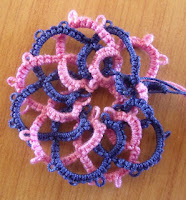 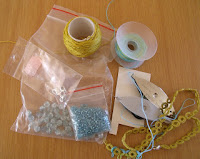 SunshineCraft started tatting a bookmark in public for her son's favourite teacher. Then she got requests for more. She's at 6 and counting. From left to right they are: Flowering Quatrain, by Joëlle Paulson, Anastasia bookmark, by Kersti Anear, Russian bookmark by Vilushka and the Tardis bookmark, by Anne Bruvold. 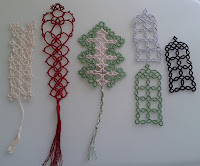 Fox tatted this directionally challenging pattern designed by Lis Christiansen, in #50 Olympus. It's finished, it helped with the stash busting, and she plans to do it again in a solid colour, but not any time soon. To compensate for a frustrating tat she did another soothing Susanne Schwenke pattern, which makes 3 of this delightful design. The mail delivery brought her a wonderful assortment of hankies from Connie as well as a lovely photograph of a hanky with a delicate Hens and chick edging. 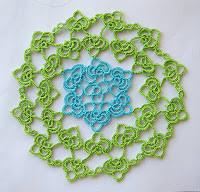 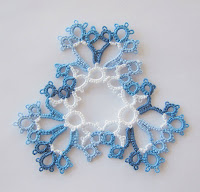 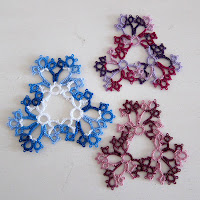 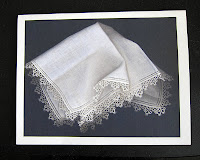 IsDihara tatted two of Jane's Bookmark Crosses, the first is in Lizbeth size 20 #156 Juicy Watermelon and the second is #149 Peacock Blues. The Playful penguins wall hanging for the 2013 Tat Days fund-raising auction will be sporting a delicate tatted edging along with some bead work and bobbin lace.

Sue tatted Sue Hansen's Crystals in a Ring and joined it to a bangle while working it, which turned out to be quite difficult. The first one is done in size 40 Lizbeth Angels' Love. The second is done with size 20 Lizbeth Royal Wave. 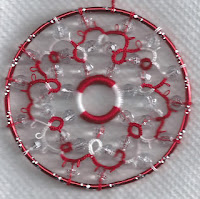 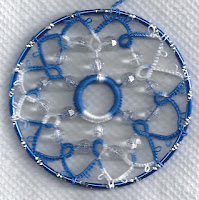 Wanda has been tatting bookmarks and trying to work with shuttle and ball rather than 2 shuttles. The one on the left is tatted in Lizbeth #611 Gold and #604 Black and on the right in #663 Bright Turquoise Dark. Then she tried something a little different and made this bookmark in #122 Caribbean and #604 Black. The next design is something she had tried before but hadn't been able to work out. The top one is made with #670 Victorian Red, the bottom in #131 Vineyard Harvest and #644 Boysenberry Dark. Then she tried the end just by itself in #663 Bright Turquoise Dark. Does anyone else see a mouse here? 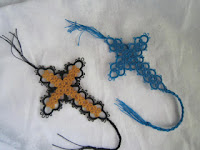 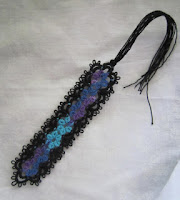 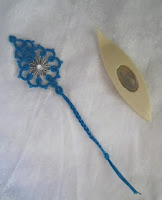