Jane finished the Diana necklace pattern by Gunhild Fette which adds beads to a single shuttle split ring and gives her one more technique mastered. 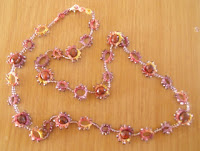 Julie has tatted 4 of Diane's snowflakes that use a centre finding and sent them home with her sister as a belated Christmas gift.

Diane is making slow progress on her latest cross, being careful to follow the pattern line by line. Starting with a partially filled shuttle meant having to stop and add thread.

Fox was ready to throw in the towel, but with a little encouragement she was persuaded to persist and the results were certainly worth it. 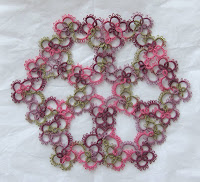 Michelle has tatted several of Lene Bjorn's Camilla bookmark as gifts for graduating students. A lovely surprise package from Fox included some of her delightful tatting. 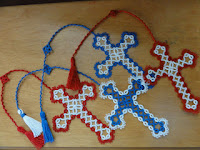 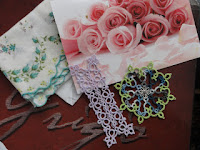