mb duke is using Lizbeth size 20 in Christmas red, White, and Royal Blue to tat this flag for her neighbour. The one done previously had beads added for stars and was mounted on a metal bar and added to a hanger. 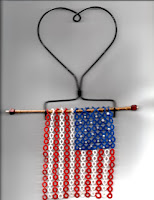 Jane tatted Ninetta Caruso's Kissing Minnows edging to add to the border of a towel. 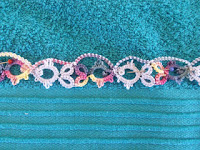 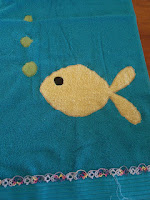 Wooroosa tatted a lovely little doily from The Tatted Artistry if Teiko Fujito. 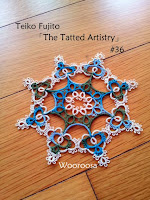 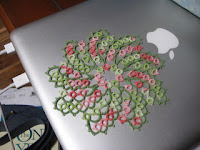 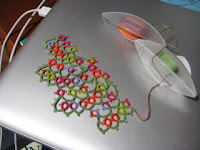 Fox is working on an intriguing test-tat for a fellow tatter. She tried another edging pattern in the Daiso #40 thread from the Handkerchief Pattern book but it was too heavy for the silk. The finished test-tatting was Jamie, by Liyarra, which will appear in the Danish Tatters Association 50th edition publication. Then she needed something smaller to work on and selected this motif. 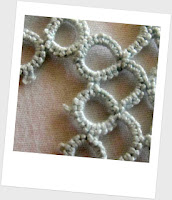 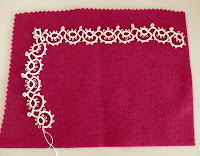 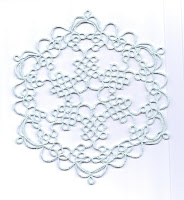 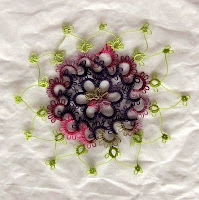 Jess created an eye catching red and purple HDT which she has named appropriately Red Hat. The motif is tatted in the colourway along with Lizbeth's Seagreen Light, on the third round. 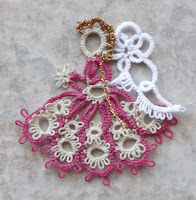 Martha is enticing us with hints as to the contents of her new book. First dragons and now a tatted Unicorn in Captivity.

Sue has tatted 60 Dangles in a rainbow of colours as mementos for the ladies on a retreat. 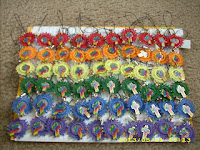 Wanda tatted Morgan the mouse who is made in Lizbeth #131 Vineyard Harvest and #644 Boysenberry Dk, size 20, with three 11/0 black glass beads.  The center is an 8-point finding with a flat-backed "diamond" glued to the centre.