Kelly tatted Jon's Quantiesque snowflake in red and green and likes how the colours go together. The doily is one of her favorite patterns by Heather Johnston called St. Pat's and the HDT which was purchased from Karey at the Fridge Elements Tatting weekend workshop. 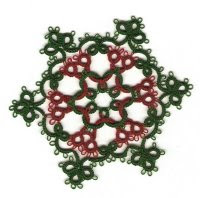 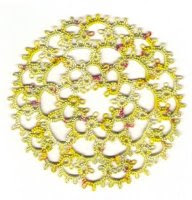 Jill tatted the snowflake pattern from Myra Piper's book "Tatting" again this time in size 80 thread color code 55 and she used Gina's idea to make it into a bookmark. The cross is from "Tatting Patterns" by Mary Konior done in DMC Perle size 12, color code 316. 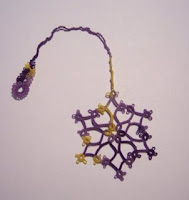 Vinnie tatted Teri Dusenbury's butterfly in peach and cream using #20 Anchor Mercer crochet thread with some modifications.She used the ball thread instead of two shuttles for the wings and the ring at the wing points is made using the ball thread. Yesterday she came across Martha Ess's page and had to try out the folded ring daisy. She loves how it turned out and has plans for making something with it. 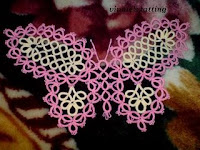 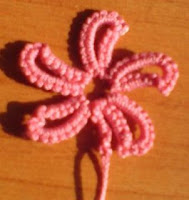 Wanda has tried tatting as art. She photographed a doily and some special shuttles on a wooden background and has framed the picture to hang on her wall. I like this idea because both the shuttles and the doily are still usable. 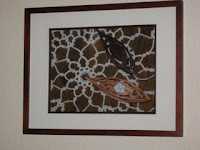 Heather tatted up Marilee's easy victorian rectangle book mark, one for each of her kids. She has been learning some new techniques and now she can do both split rings and split chains with the shuttle. Some new batches of HDT are ready, check her shop for Aqua Jade, Blueberry Caramel, Blueberry Yogurt, Bright Coral, Curried Pink, Golden Peach, Grape Lime, Mulberry Dreams and Spiced Caramel. 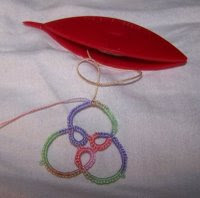 TattingChic has laid aside all of her numerous WIPs to work an a new project that she thinks will be more fun. 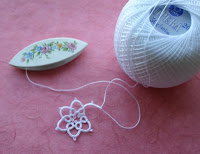 Ellen had a tatting meltdown after making more than 50 Christmas trees. She hasn't done anything for the NewYears bag exchange but she did find these pieces that she had done except for the lining. It's too bad that they are too small to fit the exchange criteria. This first one is Dianna Steven's pattern. She can't remember where she got the rose purse pattern. The last 2 are patterns from Japanese books. 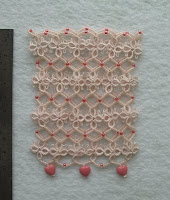 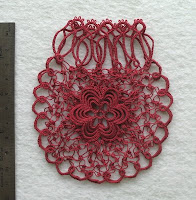 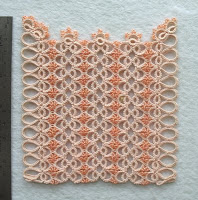 Diane has been making Mary Konior's Leaf Braid to empty her shuttles and counting it as Motif 4. Now that you have all these pieces what are you going to do with them?

Maria has been tatting without blogging for a while and here are her new pieces. 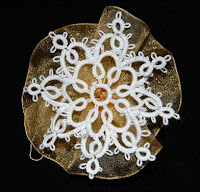 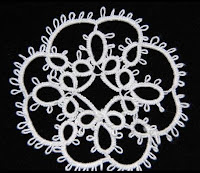 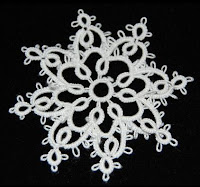 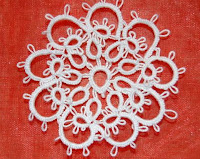 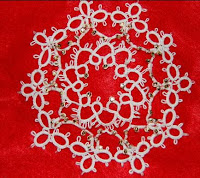 One of Moni's new year resolutions is to attach the edgings tatted for the first 25 challenge onto the things they were made for.
Posted by Sharon at 12:55 PM

thank you for the lovely, long post Sharon. You are a dear. I'm still down with my back. Hopefully I can get back up to speed tomorrow or Wednesday.

I am new to tatting and to this website. I would love to join. My blog is at http://vickiscreativecorner.blogspot.com/ Thank you for this site finding lots of new ideas.