Carolyn has tatted a motif called Fancy Flower by Rozella F. Linden from her book "Easy Tatting". She tatted the motif using size 5 pearl cotton in a nice light shade of blue

Shirley posts pictures of four very colourful Christmas themed motifs (well, three Christmas themed motifs; the fourth isn't really Christmasy). The red snowflake is from Lene Bjorn's book "24 Snowflakes in Tatting" done in size 80 DMC thread in colour #106. The Santa motif is from "The Complete Book of Tatting" by Rebecca Jones. He is tatted using Coats size 30 thread. The next colourful snowflake is from a Japanese tatting book and is made with pearl cotton size 8 and metallic gold seed beads. Shirley's last motif is from Lyn Morton's book "Tatting Patterns" and is done with HH Lisbeth thread in size 20. 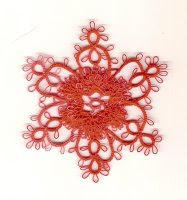 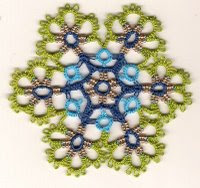 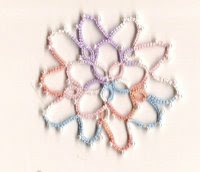 TattingChic has been busy tatting leaves. The first photo shows all her leaves together. The first leaf (starting from the second photo) is Tatted Oak Leaf by Karey Solomon from her book "Tatting Turns Over A New Leaf". The next leaf is Tatted Autumn Leaf by LadyShuttleMaker. The pattern is available here. The third leaf is Tatted Maple Leaf, which is an adaptation of a pattern from Workbasket. Tammy Rogers modernized the pattern and modified it slightly. Pattern located here. TattingChic's final leaf is Tatted Mulberry Leaf also from "Tatting Turns Over A New Leaf". TattingChic mentions that the pattern was written in a rather indecipherable way (that is her word, not mine). Looks pretty anyway. All four leaves were tatted with Yarnplayer's HDT in Sugar Maple size 20. 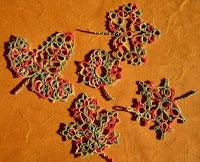 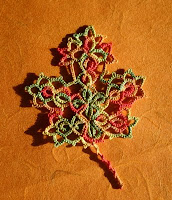 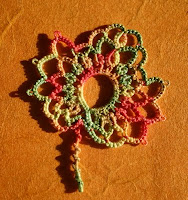 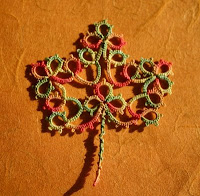 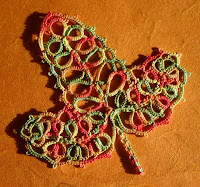 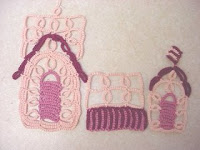 Ellen made a ROM card for a colleague of her husband. She used one of Teri Dusenbury's heart designs (well, two of the same design). She also tatted another Royal Trio Bookmark to check her pattern that she posted previously.

Iris is busy tatting earrings to sell at an exhibition in South Italy. The earrings have wire inside so the earrings hold their shape without stiffeners. The earring patterns are in Iris's book "Just For Fun". Simply stunning work, Iris. 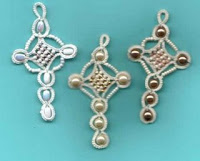 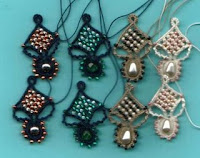 Heather is busy as always and shares another necklace and earring set that she designed. The pattern is posted as well. She used size 10 thread and a size 5 tatting needle. 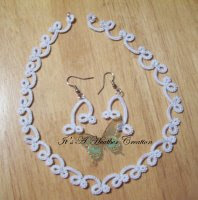 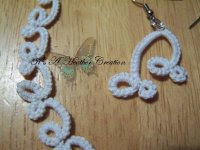 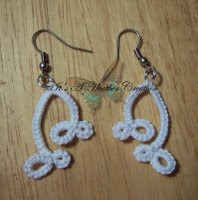 Clyde has posted about his trip to the Fringe Element Tatting Days. I can't wait to see some pictures.

Mark's niece is getting married and he gets to make the lace for her dress. How exciting!

Sapna posts her progress on the latest TIAS.

It was brought to Sherry's attention that the instructions for day 9 of the TIAS was missing the written instructions. A new updated file as been posted. Sherry also shares the progress of her tatting students. Congratulations Sherry for introducing tatting to Korea!