Heather has tatted a poinsettia from a pattern she did a while ago using 5 needle and size 10 thread. After several tries she has created a very life like Fuchsia and tatted it in several colours. Clouds and Rainbow let her relax from the frustrations of the day.I'm not sure what it is, but I like it. Heather has very generously shared all of the patterns for her creations. 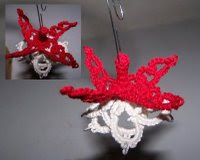 One of Alan's favourite bookmarks is this one by Lenore English done here in Flora #20.

Jeanne made the vintage Tatted Daisy by Mrs. W.M. Odum in Cebelia size 30 color light blue #747. This was easier to work on than clunies while waiting for the arrival of a new granddaughter. 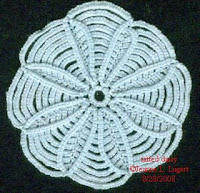 Tara did this motif in Perfect Quilter thread but it wasn't quite what she had in mind. Then she found a motif in Karey"s Tatting Times that was just perfect for her pencil case. They do look beautiful together. 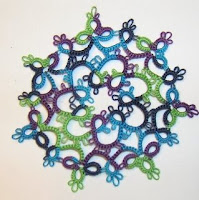 Bhavani has been trying to come up with an edging to match her motif 7. She's not sure which of these she prefers. Any ideas?

Anne made a deal with herself not to tat with sewing thread but…. Isn't this tiny dragon just exquisite? 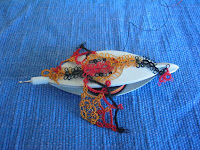 Bev has re-tatted the geranium leaf because it didn't remind her of the plants she grew up with. Pearl tatted stems and Victorian sets made it more like the foliage she remembered. The Colorado Columbine was also re-done but after blocking the petals look too pointy and the white ones get lost in the background. 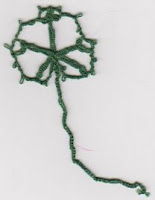 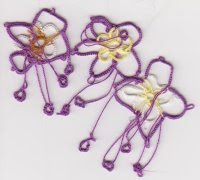 After Diane found the wee mistake, she luckily had enough thread to make another of Christel Weidmann's Design 1. This one has all the picots in the correct place, and all the joins are correct.
Gina tatted angel wings for a family member from Vida Sunderman's book and she's almost finished the bridal hanky.
Jon has been working out a corner for an edging so she did 4 variations trying to find one she liked. The one that was most visually appealing had to be done in sections but it does make a really nice corner. For those of us who love Jon's patterns, she has consolidated them on on a new blog called Jon's Patterns Page You may want to make note of the page if you love Jon's patterns.
Sherry's new colour HDT is Island Bouquet. The tatted baby booties are done in Weeping Cherry, size 20 silk.
Snowy has finished her 3 stage bookmark with the last round that brings it all together.
Posted by Sharon at 7:18 AM