Vera couldn't wait to start this design which she though was going to be small. Done in size 16 Eldorado it's 11 cm across. 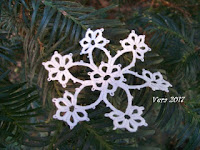 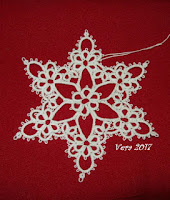 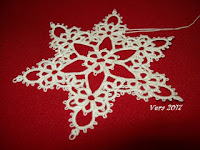 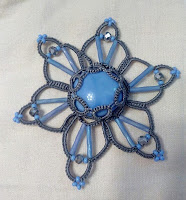 Elsa found a shirt in light blue tones that she loves, but it sometimes shows more décolletage than she is comfortable with, so she created a modesty insert in tatting. She measured and drew the shape of the neckline, including the location of existing seams and chose the thread, DMC 50 coordinated cotton white and a complimentary pattern. The finished piece was too white and contrasted too much with the fabric until she embroidered in some blue gray pearls. 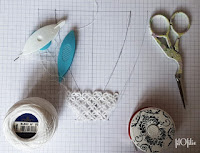 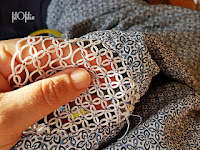 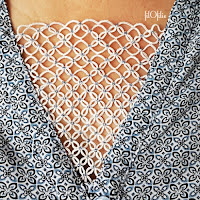 Melanie created a tatted version of Beethoven’s 9th Symphony last movement showing what it looks like using the bead count.

Cindy created another motif using a button made from an antler slice which was fun to try working around the more oval shape. 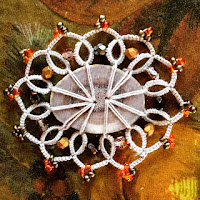 Diane decided to venture into tatting around a Christmas ball and her first venture was with Renulek's Bubble 3D-1. That left time for an Ice Drop in green with a green ribbon with pristine white thread. She has made some progress on her SIL's runner. One Ice Drop got started. 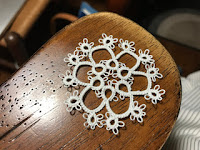 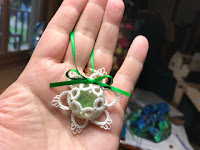 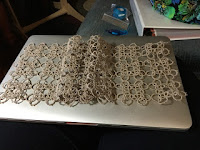 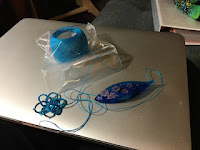 Eliz received a care package from Denise Wessman when she was sick earlier this year which included an Ice Drop done by Denise and all the materials for Eliz to make her own. She was finally feeling well enough to create her own sticking closely to Diane's original pattern using size 20 Lizbeth thread. 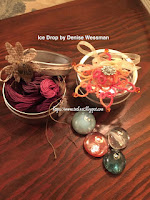 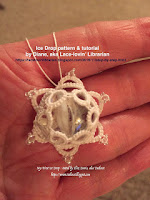 Fox tatted another button bookmark for a gift. She's not sure where this pattern comes from but she's tatted it many times, this one is in size 40 Lizbeth which she is trying to use up as it's a least favourite variegated thread. 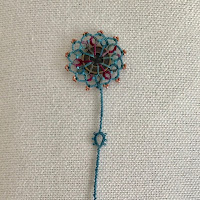 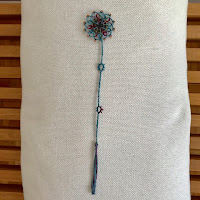 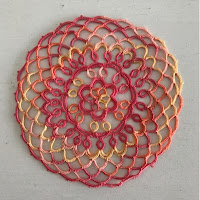 Margaret was challenged by Fox to try a design from Craftree that she had given up on, which is started in Lizbeth white in the middle and second round with Lizbeth purple, both size 20. 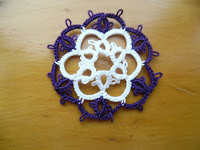 Marie has been been test tatting for a friend and here is one of her, beautiful snowflakes. 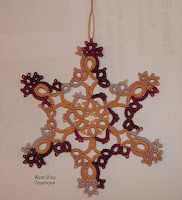 Muskaan has posted a tutorial on switching the core thread. 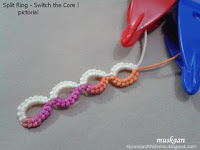 Wanda's neighbour asked for a pair of earrings for his granddaughter who likes horses and turquoise. This is Wanda's rendition based on Debbie Arnold‘s Seahorse pattern.