Vera found it challenging, but she finally completed Renulek's spring 2016 doily in size 16 Eldorado thread in white and cream with a finished size of 61 centimetres. 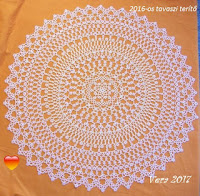 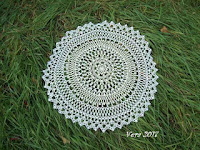 Diane tatted her Pink Fudge Ice Drop pattern, buy made a mistake in the count on the chains in the first round, so she needed to use the steam iron to tame the tatting. This Ice Drop is her Pink Fudge pattern again. Then she worked on her Spring Garden pattern. That was followed with her Minty Fudge pattern all tatted in size 20 Lizbeth #657, Ocean Turquoise Dk. She wanted to make sure she finished an Ice Drop so she chose a simple pattern for this one. 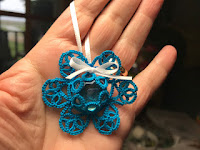 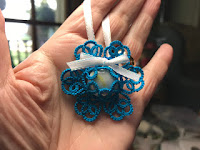 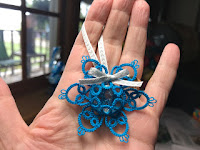 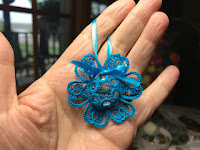 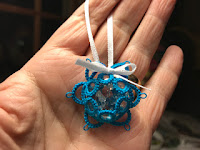 Margaret has done round four and five of her doily, this time working with shaded pink Cordonnet size 20. 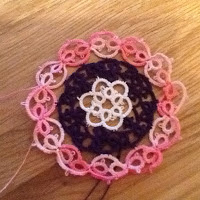 Marie gives us a sneak peek at another of Robin's designs that she test tatted. This is another test, snowflake, by Tatting by the Bay and she loves tatting the onion rings. One more test tatted pattern and now for adding beads. 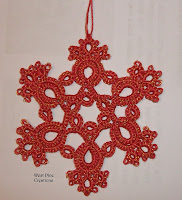 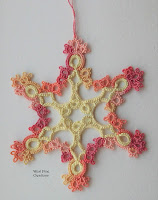 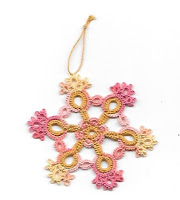 Martha didn't take many pictures at the Palmetto event, but she did get some nice shots of a shawl that was donated to be auctioned. An actual completed class project, Kosmos, by Karey Solomon. 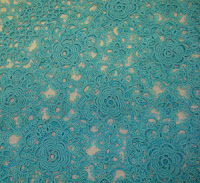 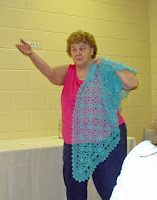 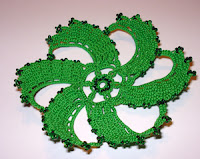 Nikki tatted black cats to go out with her Halloween cards. 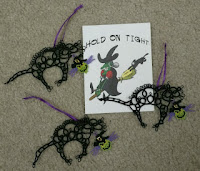 Sue tatted Birthday Ice Drop from Nicola Bowersox, which was adapted from
Wally Sosa's 2015 Birthday Motif, tatted in size 40 Lizbeth Blue Ice thread although the pattern calls for size 20. Another using all iridescent gem, bugle beads, the "round" beads and seed beads. Here they are shown side by side. Another Birthday Motif Ice Drop just different beads. She was asked to re-tat her treble clef pattern and she added in some notes tatted in size 10 Royale thread. Pattern for the treble clef here and the musical notes are available from her blog. 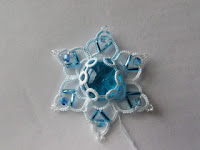 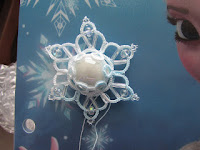 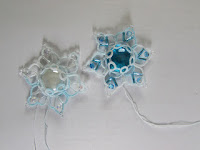 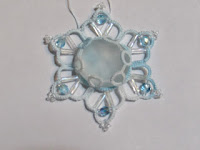 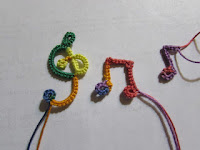 Wanda was challenged by a comment her pastor made to re-create Martin Luther's seal in tatting to commemorate the 500th anniversary of the Reformation movement which was the advent of the Protestant church. The seal is a white rose on a blue background with a gold border, with a heart centred on it and a black cross in the centre. As part of the display, Wanda included the meanings of the theology of the Rose and presented the finished work at church, where they celebrated Reformation on October 29th. 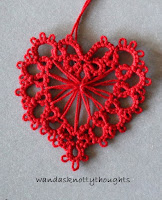 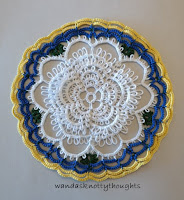 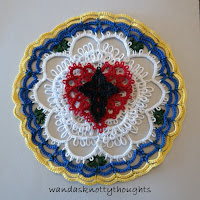 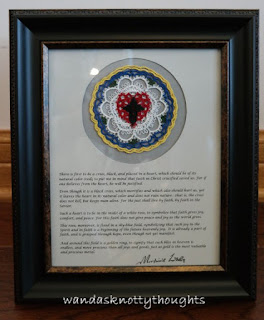