Marthanne selected her next motif for the challenge from A Tatter's Workbook, sample #56, which in the book it is stated that the 1925 price for the lace was $.50 per yard. Since Marthanne didn't time it on the first one, she tatted it again, taking 1 hour and 12 minutes and allowing for 2017 inflation it prices out at $6.90. 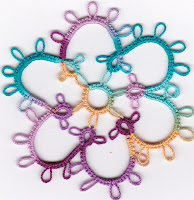 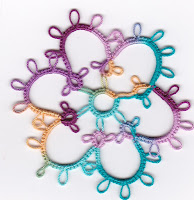 Melanie has complete Day 10 of TIAS. 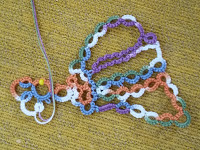 Lelia thinks Jane's Day 6 of TIAS might be an umbrella, or a mushroom top, or a sea shell, or maybe a fan, or a teacup. Day 7 maybe it's a skirt, or a bird. After Day 8 she's not sure, but she's still tatting it in 2 different colours. The puzzle continues with Day 9. Day 10 working in blue Lizbeth Size 20 #403 Winter Ice Twirlz. Day 10 in Lizbeth Size 20 #161 Sea Island Citrus. 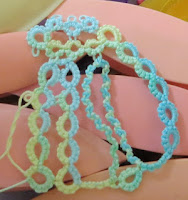 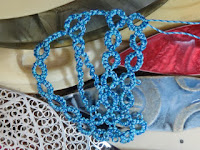 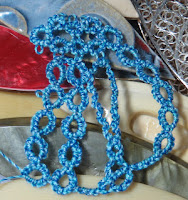 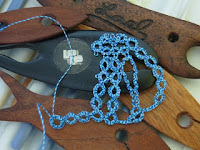 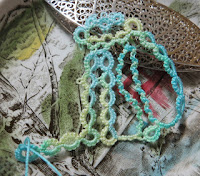 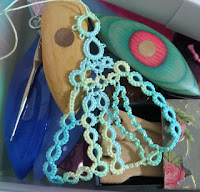 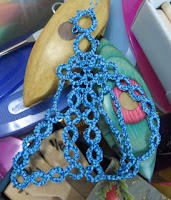 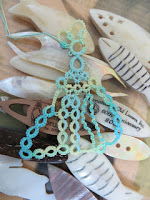 Cindy received  a shoebox of thread from her Mom's friend which was mostly white and she added some variegated thread to make this coaster from the 'New Tatting' book by Tomoko Morimoto. She used some of the size 80 thread to make Mary Konior's Large Cross from her Tatting with Visual Patterns book. 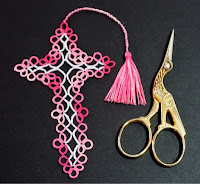 Diane finished her Eightsome Reel doily from A Pattern Book of Tatting by Mary Konior, but not without frustration as she miscounted the number of wraps required when she filled her shuttle and had to add thread, but then realized when she ran out again, that she's added enough thread not for one motif, but for one ring. She tatted Day 10 of TIAS but she needs to figure out how to add links when she's posting from her iPad. Another Ice Drop is completed. She's still geared up for tatting green Ice Drops. She tatted the first motif for her sister-in-law's runner in size 20 Lizbeth #693, Linen Med. Another Valentine's Ice Drop joins her collection. She has another St. Patrick's Day Ice Drop done, but she thinks she placed the charm in a funny way, or the ribbon is too stiff, because she doesn't like how it turned out. She also managed another motif on her runner. 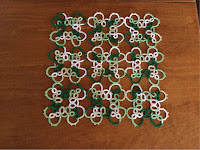 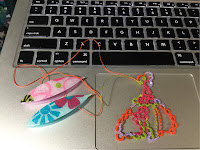 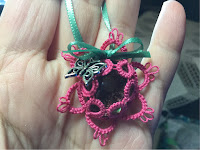 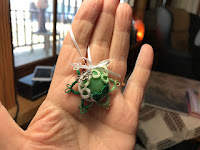 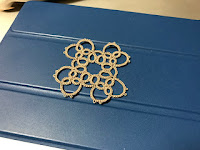 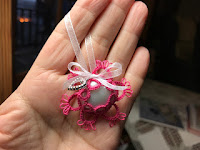 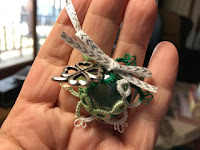 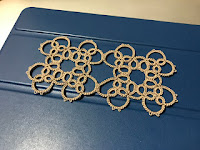 Fox doesn't have any more size 40, but she has lots of size 80, and started the same design as she's been using for the boys in size 80 for Maeve, who loves purple. She's almost done with Shrek! 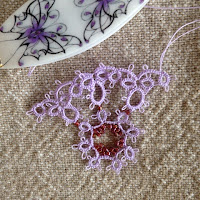 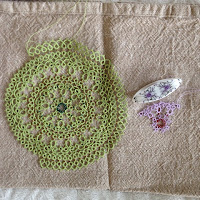 Margaret tatted the butterfly that Muskaan wrote up the pattern for, first in Lizbeth Springtime size 20, then in Green Coral Sea size 20, although the second time she graduated the picots on the top wing. 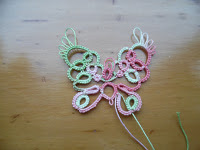 Muskaan had some thread left over from another project and had to tat Phyllis' Fish paperclip bookmark. Day 10 of TIAS she's thinking it's a lady in a gown. The Block heart made in size 3 or 5 thread is a nice size for a brooch, pendant or lapel pin. 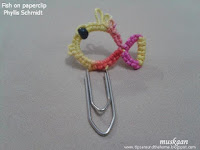 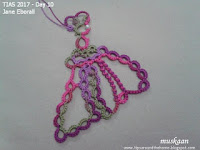 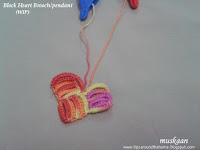 Sue tatted the Celandine Necklace by Kersti in size 40 Lizbeth Lilac Dk. with some random beads she had.