Claire, at Day 7 thinks that at TIAS looks like it might be a snail or a turtle. 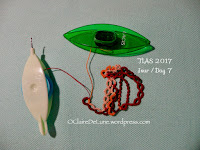 Diane tatted more of Eightsome Reel from A Pattern Book of Tatting by Mary Konior. She managed 3 motifs, but she had to cut off the fourth one because of too many mistakes and she wants to get the pattern down pat before she starts the runner for her sister. After her trip to Alabama she started back in on St Patrick's day themed Ice Drops. She managed to add a little extra decorative loop between rings 21 and 22 of TIAS, which she didn't notice until this morning, and she wasn't about to retro-tat, so it has become a design element. 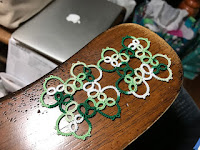 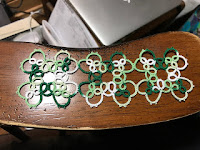 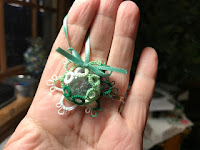 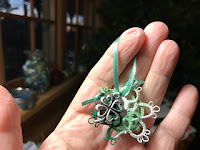 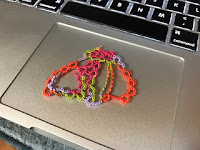 Fox finished the doily in blue, omitting the last row to leave a more masculine design that to her eye looks mildly heraldic. She started on another in green, this time using two different colours of beads. 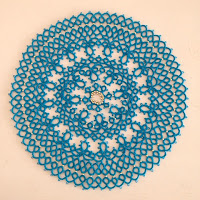 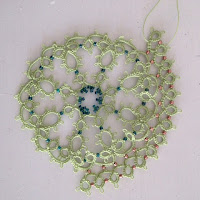 Marie made another necklace for her Garden Collection using an old pendant from Italy. 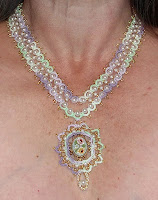 Muskaan has done a beautiful rendition of Ninetta's Bugle Bead Star. As usual she has shown her step by step instructions and noted why it was important to keep the thread on the right side of the bead because it creates problems later on if you don't. She went on to tat Jane Eborall's 3D Beaded Flower Earrings but she didn't add a bead between 2 petals, preferring to join to plain picot, and keeping the petals inside the hollow calyx. 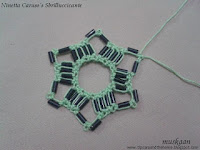 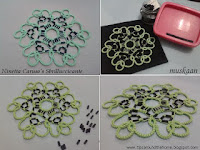 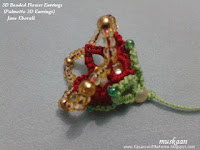 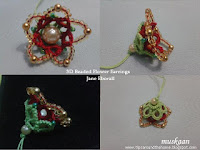