Pop Maria is dreaming of summer and creating a lovely tatted picture of spring flowers. 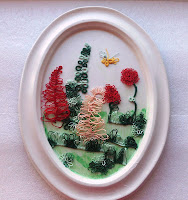 Sarah really enjoyed this adorable angel pattern by Anne Bruvold, a clever use of both single shuttle split rings (SSSR) and self closing mock rings (SCMR) which tats up quickly. 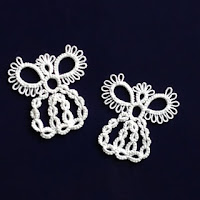 Elsa was looking around for another long term project to replace the Harlequin shawl and she thought this Jan Stawasz design might work but it wasn't the shape she was looking for. Then she thought about the  two "Flower Carpet" bracelets design which was created by Tomoko Morimoto to design a portable pouch (model published in the book "Fascinating frivolity" and it seemed just right. She wasn't sure whether she should start on the long side or the narrow side and finally decided that she needed to work from the long side to make sure that it came out to the projected length of 140 cm. She's working with  Lizbeth size 20 colours 626 and 627 and has started the first side of the edging. 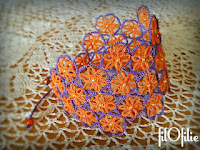 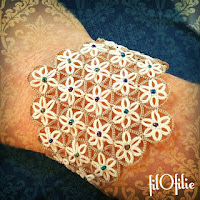 Claire tatted Day 6 of Jane's TIAS, and other than knowing it's not symmetrical, she has no idea what it will be. 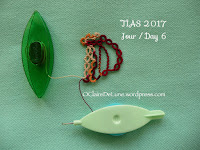 Diane is in love with shamrocks, tatting green Ice Drops and adding shamrock charms. She finished the Masquerade motif from Tatting with Visual Patterns by Mary Konior and although she likes the way it turned out, she thinks it's a bit too fiddly for a runner. She tatted another green Ice Drop while she thinks of what to do. She tried this motif from Jan Stawasz's Tatted Treasures and it's another possibility for her sister in law's runner.  Eightsome Reel from Mary Konior's A Pattern Book of Tatting is another possibility she tried out. 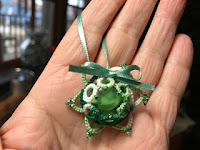 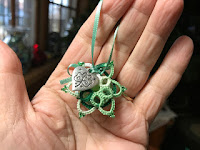 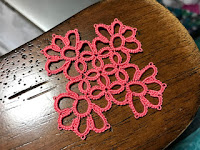 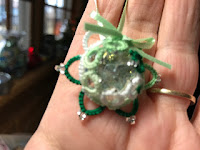 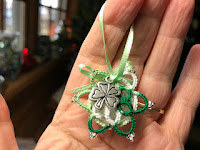 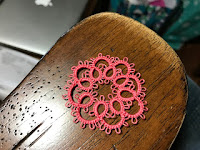 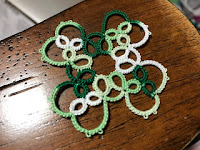 Fox has three more rows to go on the blue doily and it's tatting up quickly. She decided that it looks more masculine without the last row so she's going to leave that one off. She started in on a green doily, for the boy who loves green, thanks to Shrek. 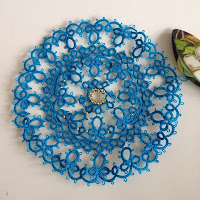 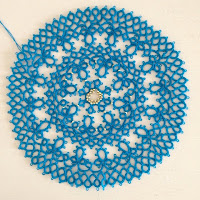 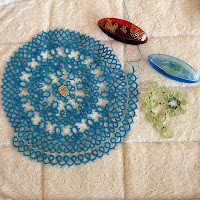 Jane has Day 7 of TIAS done and she doesn't only not know what it is, she doesn't know which way is up. 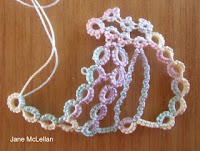 Muskaan has Day 6 of TIAS done and still no clue what it is. She has tatted the Twelfth Day of December Snowflake by Lene Björn and she had some interesting experimentation trying to get the colour where she wanted it. 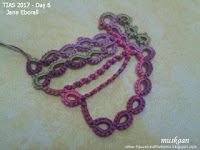 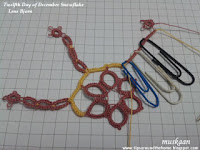 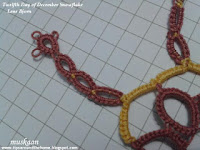 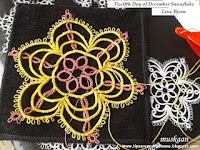 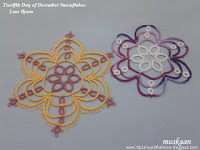