Pop Maria's granddaughter asked her to make a medallion in blue and red, so she dyed the thread and designed this one, with a smaller, earring size version and a bracelet in the planning stages. 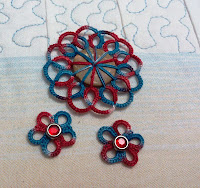 Sarah tatted motif 17 from DMC's Festive Tatting, one of her first books and one of her favourite patterns, although she eliminated some of the inner picots. 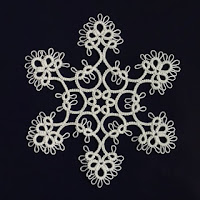 Batty Tatter has been tatting Christmas angels for the Christmas market next month.

Diane was persuaded that her blue doily needed a red C for the Cubs. She has been playing around with "How to make a bezel setting in tatting by Edda Guastalla" thinking to create a snowflake, but she has decided to call this start a Snowdrop. She decided to work out how to make a Cubs doily working the red C into a blue Spinning Wheel, but she thinks she'll have to make some adjustments. 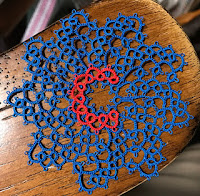 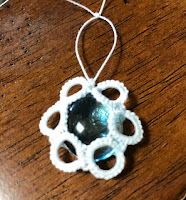 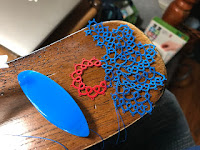 Eliz tatted The Thirteenth Day of December from 24 Snowflakes in Tatting by Lene Bjorn in Manuela size 20. 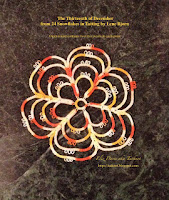 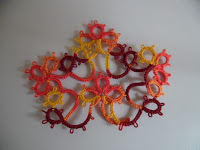 Marie added pearls to her Lover’s Brooch design. She shows a variation of her design for tatting around a fixture using seed beads. She created these Lil' cross earrings and after making them discovered they could be used in either direction. 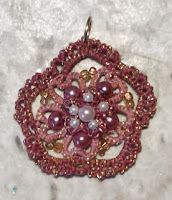 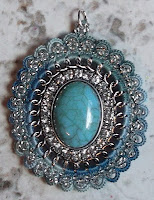 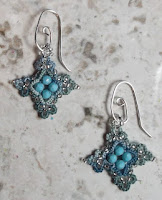 Muskaan has been taking bits and bobs of tatting, sewing them on and using them up in various ways. 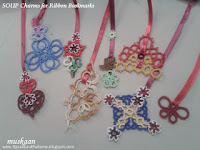