Jane isn't fond of edgings that combine tatting and crochet like 91 and 92 and she's not sure she did the last row on the top one correctly, but it can create different effects. She liked the look of edging 93, and liked it even better when she realized that it is tatted in one pass. Edgings 94 and 95 use 'Victorian sets' of 4 first half stitches followed by 4 second half stitches, but she prefers the effect just on the chains. 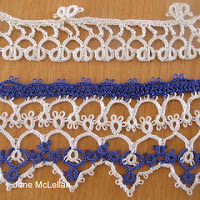 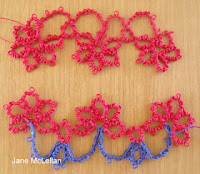 Marthanne found this Maple Leaf Motif by Tammy Rodgers aka GreenFuzzer from 2001 and tatted it in Lizbeth's Autumn Spice # 136, size 20. A perfect pairing of thread and pattern and just the right size for tatting during a football game.

Elsa tatted her fourth design combining tatting and needle lace and the long picots in the centre provided a good support for needle lace overlay. This celtic bracelet was designed to match the other celtic pieces she made. The set ready for wearing has a pendant, earrings and bracelet. 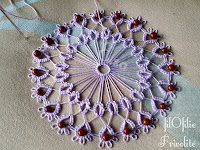 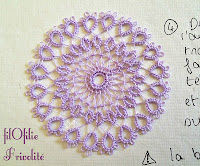 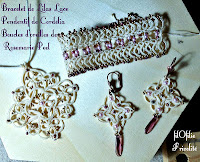 Melanie likes the tight centre of this motif from a Workbasket magazine which uses trefoils of smaller rings all joined to each other and she thinks it would make a nice tablecloth. 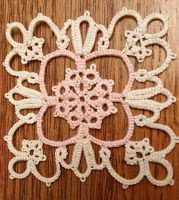 Diane is loving working with the size 80 thread, Raspberry Pink Med for this Spinning Wheel. Since she was subbing, she didn't have much tatting time, but every little bit helps. The Raspberry Spinning wheel is done, and now she's on to one in Lizbeth #712, Kelly Green Med, also size 80. She's making slow progress on this Spinning Wheel as she and her sweetie took time out to celebrate their 36th anniversary. 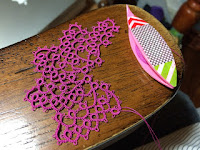 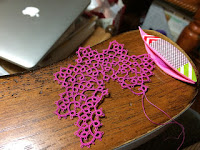 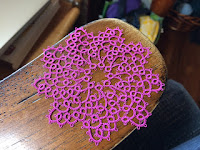 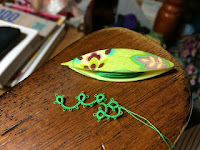 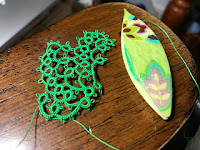 Eliz explains the differences with tatting right handed or left handed especially while paying attention to front side/back side work. Playing with Muskaan's TWOT she worked pat of a wreath. Then there was the challenge to start with a different ring. 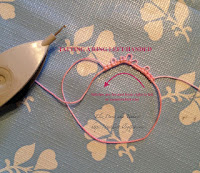 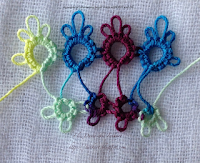 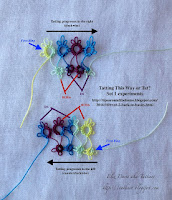 Marie loves finding old clip earrings and this is one revitalized with tatting. She has started several collections and thins one is called Royal with royal blue beads. Another Royal variation. The cross by Lene Bjorn is called Malene. 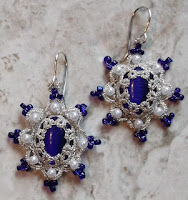 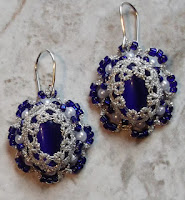 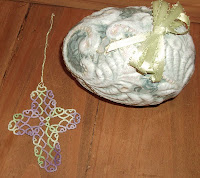 Muskaan added some beads to a wreath segment bracketed by a couple of laurel leaves it would work well as a necklace or choker. Fun ways to play with tatting. This butterfly glued onto a book ribbon makes it longer and keeps it from fraying. Rachael Mohler’s Hen n Chick Square Motif done in a nice fat thread makes a good coaster. Her first Hens and Chicks edging. A small butterfly project on Craftree is still being perfected. Tattingweed’s Crinoline Doily is giving her much more thought for the TWOT series. 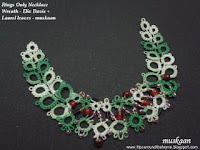 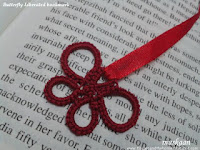 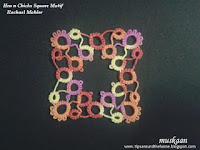 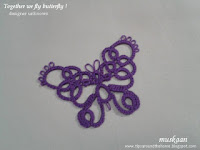 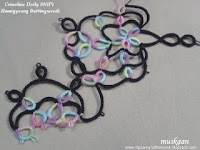