Nikki found Mark Myers' ghost pattern and tatted 10 of them to send out as gifts. The first one was done all in white, but she didn't think the face stood out enough so she did the rest in grey and white. 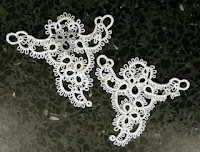 Elsa was written up in a small local newspaper and as you can see they displayed an assortment of her tatting and the gorgeous shawl she is working on. 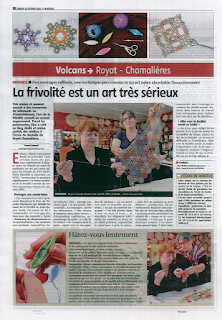 Melanie is doing a study in squares like this one from Workbasket pastel and white. 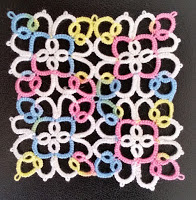 Diane has been working on incorporating a red letter C into a blue Spinning Wheel to make a Cubs doily and at this point she's stuck because it just doesn't seem to want to work out a s planned. (The eternal dilemma of designers.) She's been working on more snowdrops and this was her first experimental hanger using a Josephine chain, (also called zigzag or RicRac tatting). She replaced the chain with a ribbon which looks neater and more elegant. She's worked in down to 45 minutes which is pretty good for lots of awesome, unique decorations and gifts. She's started another Spinning Wheel, this time in size 80 Lizbeth #669, Poppy Red. Even with subbing, she managed to complete two more snowdrops. On the second one she added pearls. She's making another try as a Cub's doily switching to red for the inner rings and it seems to be working. Her recap of October's tatting shows a lovely layout of luscious laces. She really likes the extra dimension the pearls add to her Snowdrops. These last two are in blues of slightly different hues although it differences don't show up well in pictures. She has made some progress on her Poppy Red Spinning Wheel. 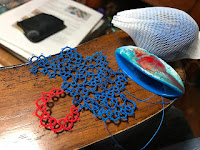 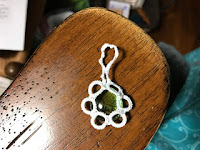 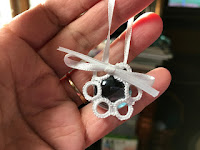 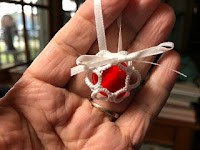 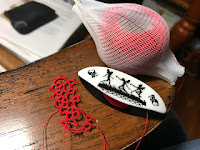 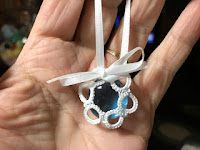 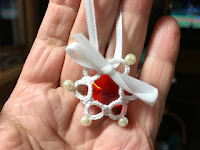 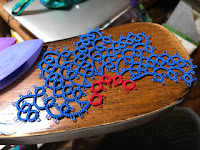 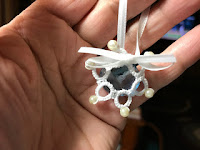 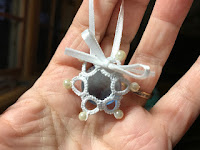 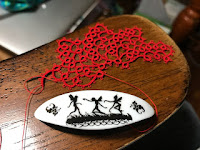 Fox is on row 12, another interminable row, lots of ring and chain, followed by, ring and chain, ad nauseum. Cheer up, it will eventually end and go into a different row, like, oh maybe, chain and ring. (I'm ducking and running for cover.) Fox is fed up with people ranting and raving online about about patterns and designs being stolen and usually the complaints are being made by people without proper understanding of the whole issue of what comprises copyright infringement. So she has assembled a collection of various pieces to display the whole issue. She points out, correctly, that some tatting elements Like a trefoil or cloverleaf are just typical tatting elements, as are plain edgings of ring and chain or a simple medallion of ring and chain which can't be copyrighted any more than a single ring could be copyrighted. She has given a well throughout discourse on the subject complete with pictures that you should take a look at, especially if you're hazy on what can and can't be copyrighted. 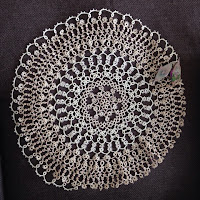 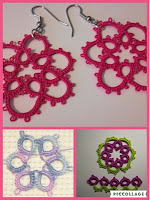 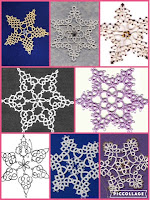 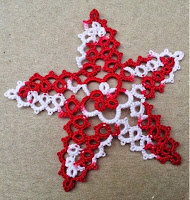 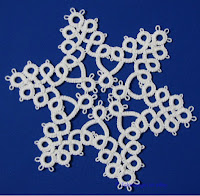 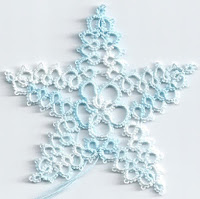 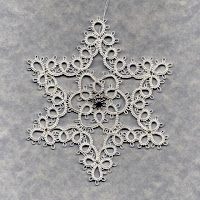 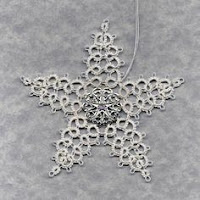 Marie says Stuart is a medium sized minion, with one eye and his hair parted in the middle created using a pattern that is a variation by Sarah Woods. This minion is Tim, who is a little taller and his hair stands straight up. Bob is the simplest of the minions, with 2 eyeballs and his hair parted on the side. This cross pattern is by Grace Tan, called "Jane's Cross". From her favourite book, "Tatted Bookmarks: Crosses," by Lene Bjorn, this is Amalie. 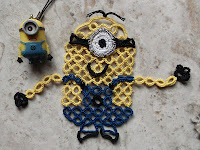 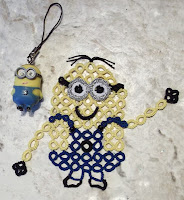 Sue has three little repeats done on her doily and she's thinking that at this rate Fox is going to pass her. It doesn't look like much... until you see the whole gorgeous doily. One of the ladies in her Sunday group picked up a pair of donut earrings for her daughter, who didn't want to wear them as earrings, so Sue crafted a bracelet for them. Clever Sue. 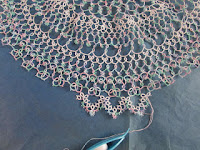 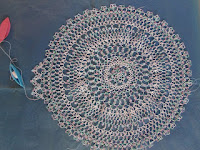 Thanks for posting that. I wrote the post in a complete fit of rage because of an online battle between two tatters over a copying/stealing issue. I thought about you and a conversation we had years back...!

This community can be VERY petty! I keep my distance now.

Hope you are faring well,