Muskaan tatted the Morning Glory Bookmark designed by Eliz Davis in Anchor Mercer Crochet thread size 20 Ecru/Cream #0300, Pink #052 and Mehandi Green #0256. Hummingbird  for Beginners designed by Sarah Warren was tatted using  Anchor Mercer Crochet Cotton, size 20 in Lemon Yellow, Variegated Purple, Metallic Silver & Green. then she did her own variation which she did again to tweak it. It's been paired up with Sunflower & leaves that are her own original patterns. 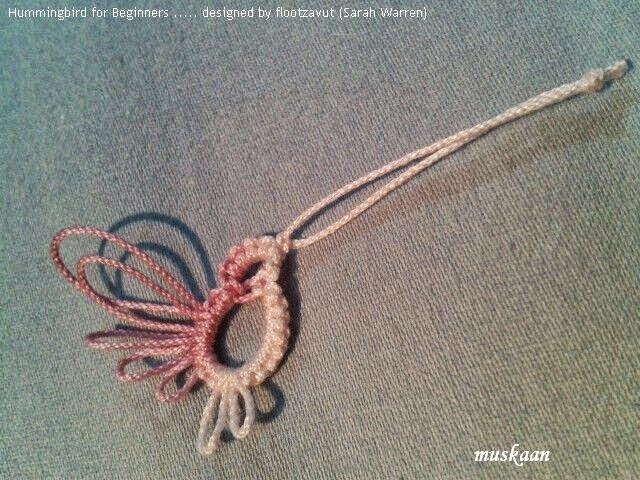 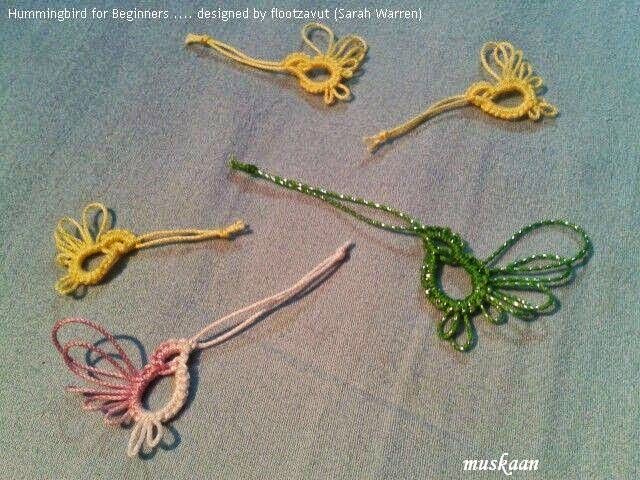 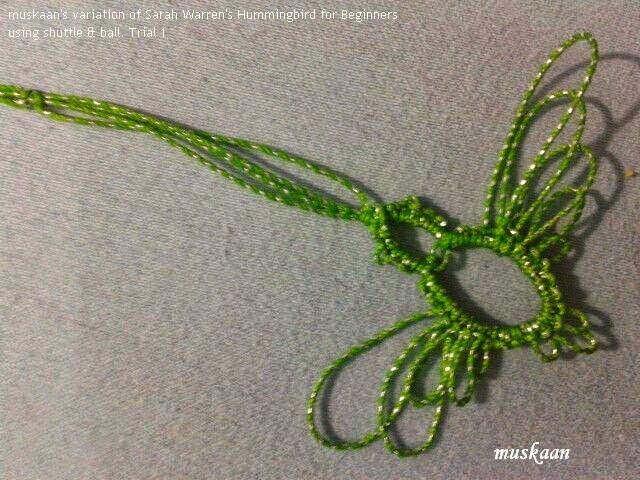 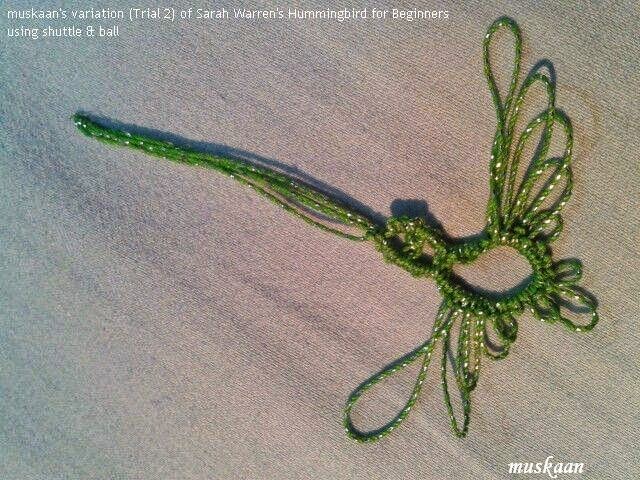 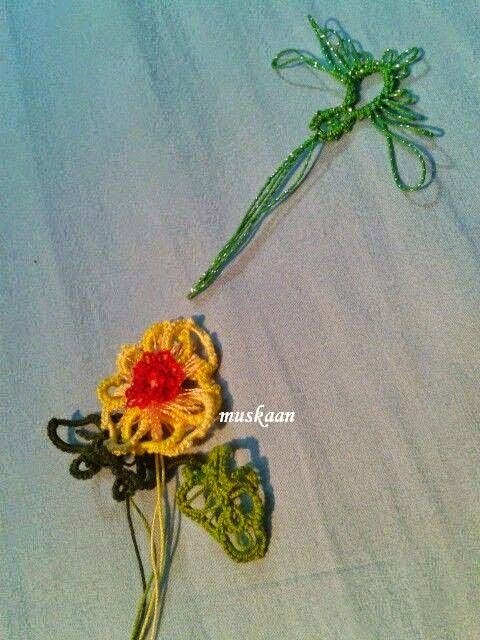 Batty Tatter made Susan K. Fuller's Heart's Desire heart Lizbeth Raspberry Frappe which she plans to attach to a card. 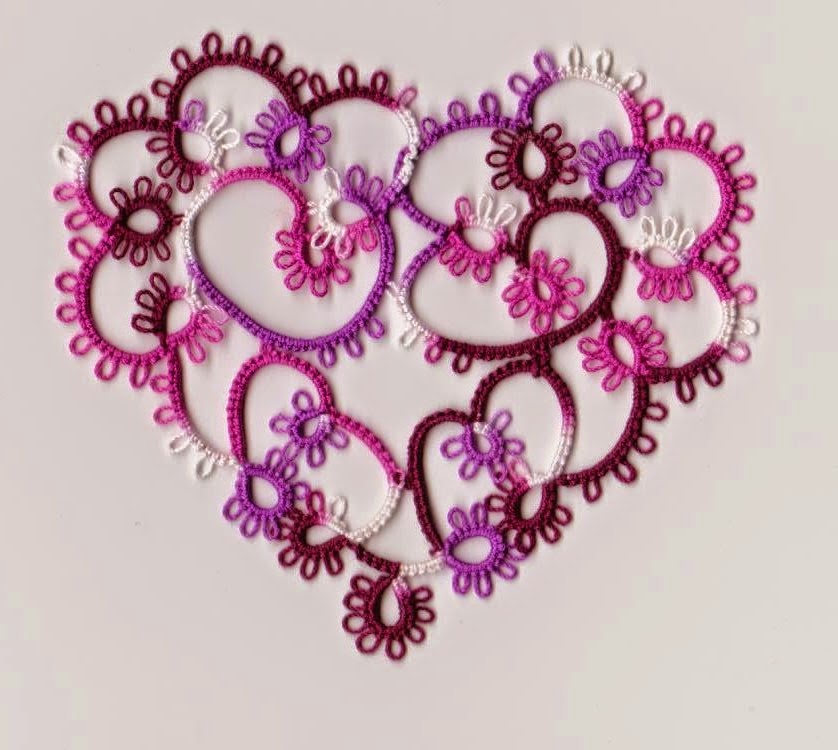 Lilas loves spiral chains, but it's not always easy to find an appropriate use for them like the chain for this pendant, which is made Lisbeth black thread size 40 and Miyuki beads. 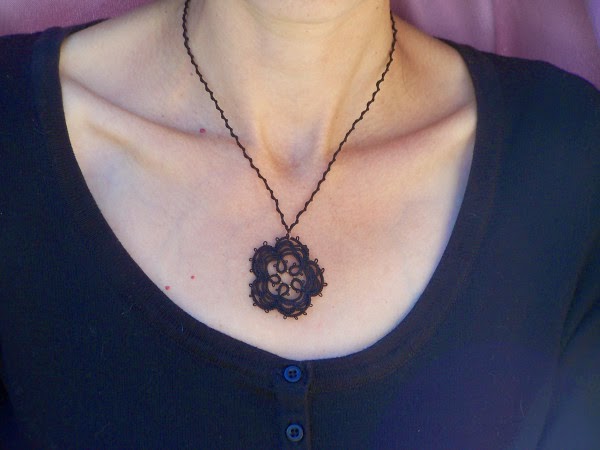 Sue is working on a Scottish/Norwegian Loch Dragon she has named Hagua even though it isn't finished yet. Her first dragon, named McVroom was very colourful. Her bookmark dragon was named Leif for the leaves of a book and made in vibrant red because pages are read. Is anyone else groaning at this phonetic play on words? 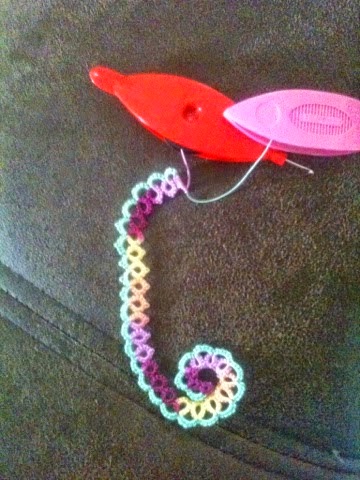 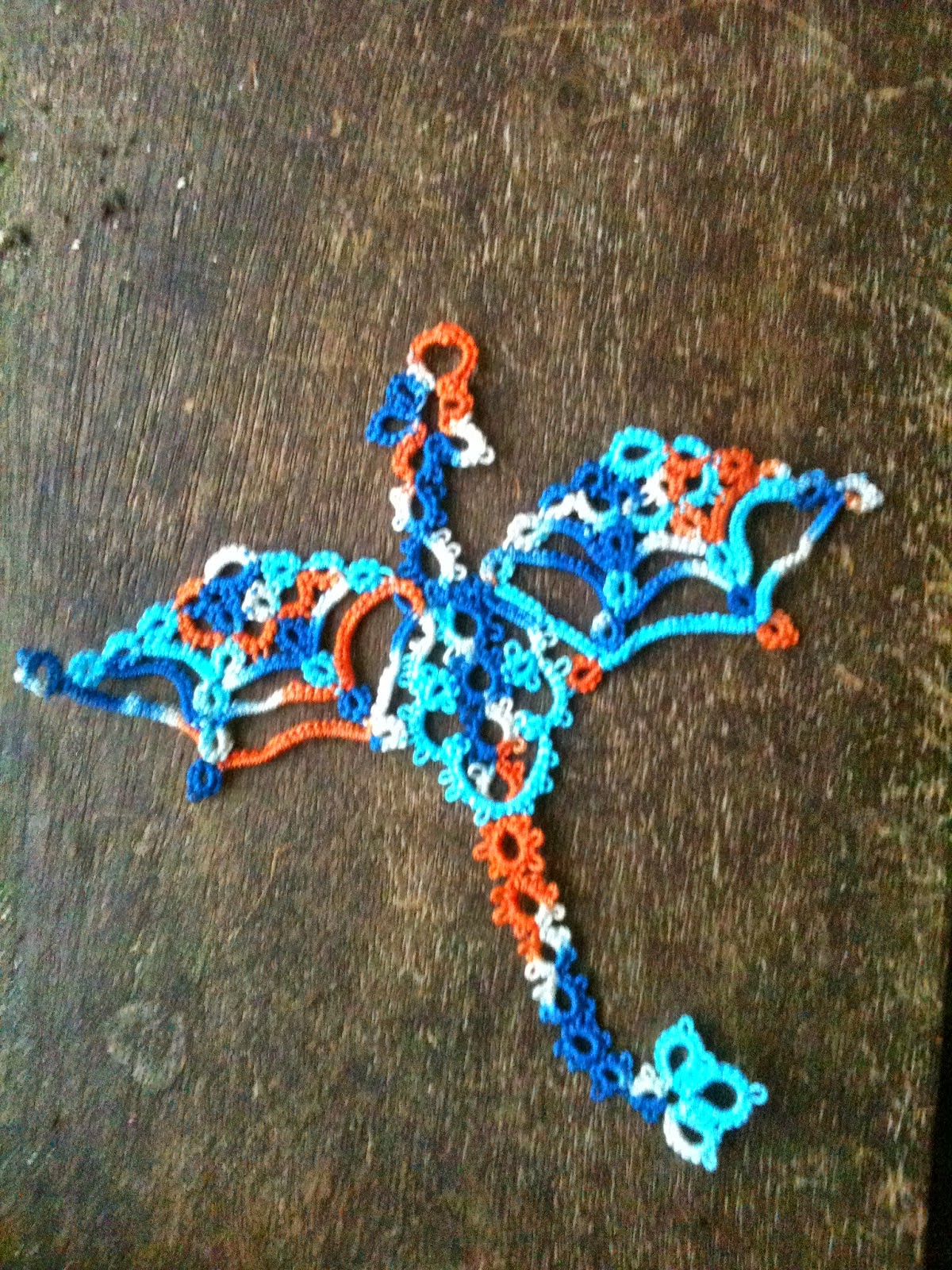 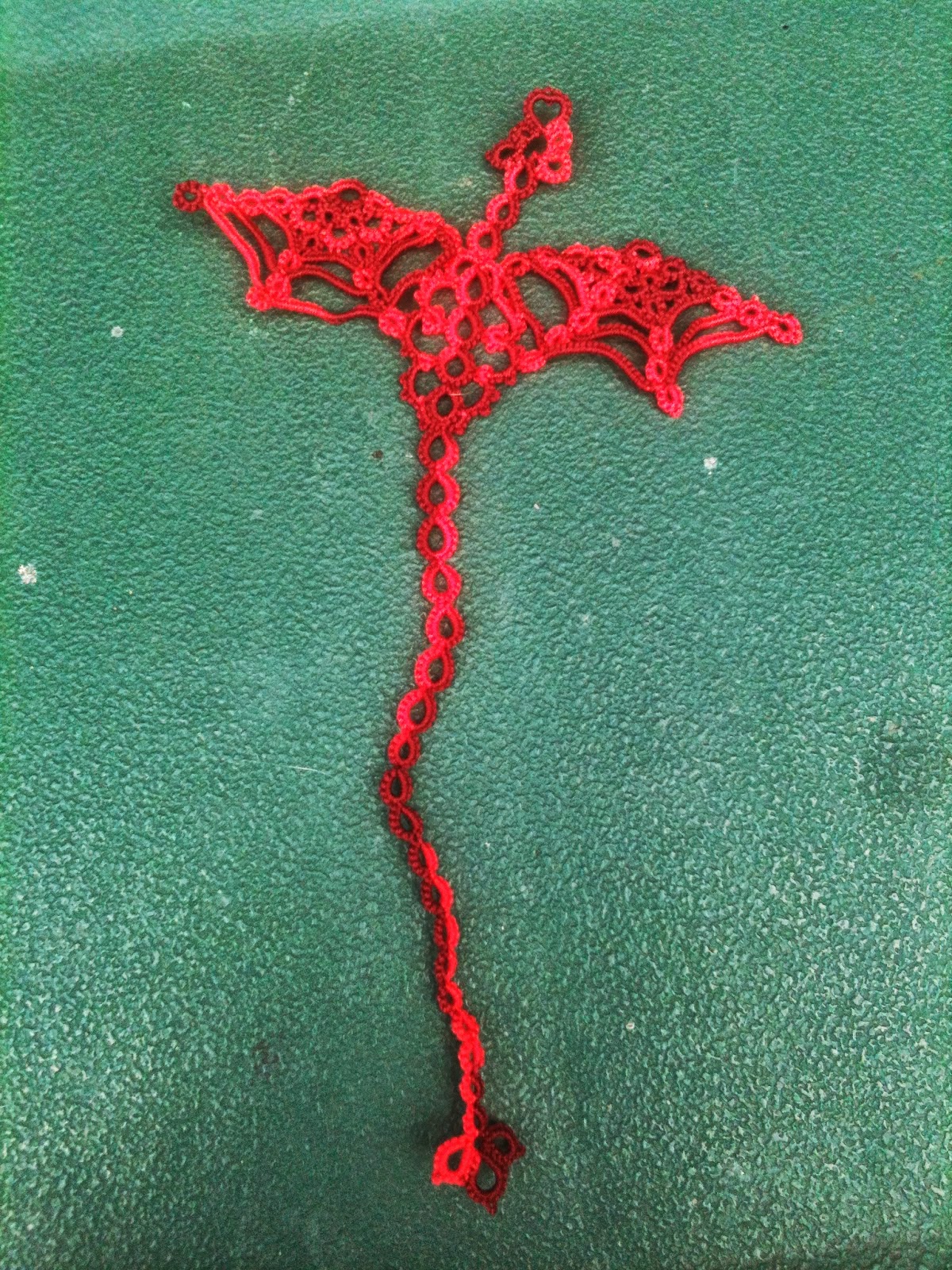 mb duke finished Mary Konior's Small Cross from Tatting with Visual Patterns and she loves how it turned out. She thought she needed a break from crosses and found inspiration from this post from Muskaan and found a similar flower motif in Martha Ess' Tea is for Tatting, so I used it for the flower and for the stem she used a simple ring/chain design she saw on a bracelet. 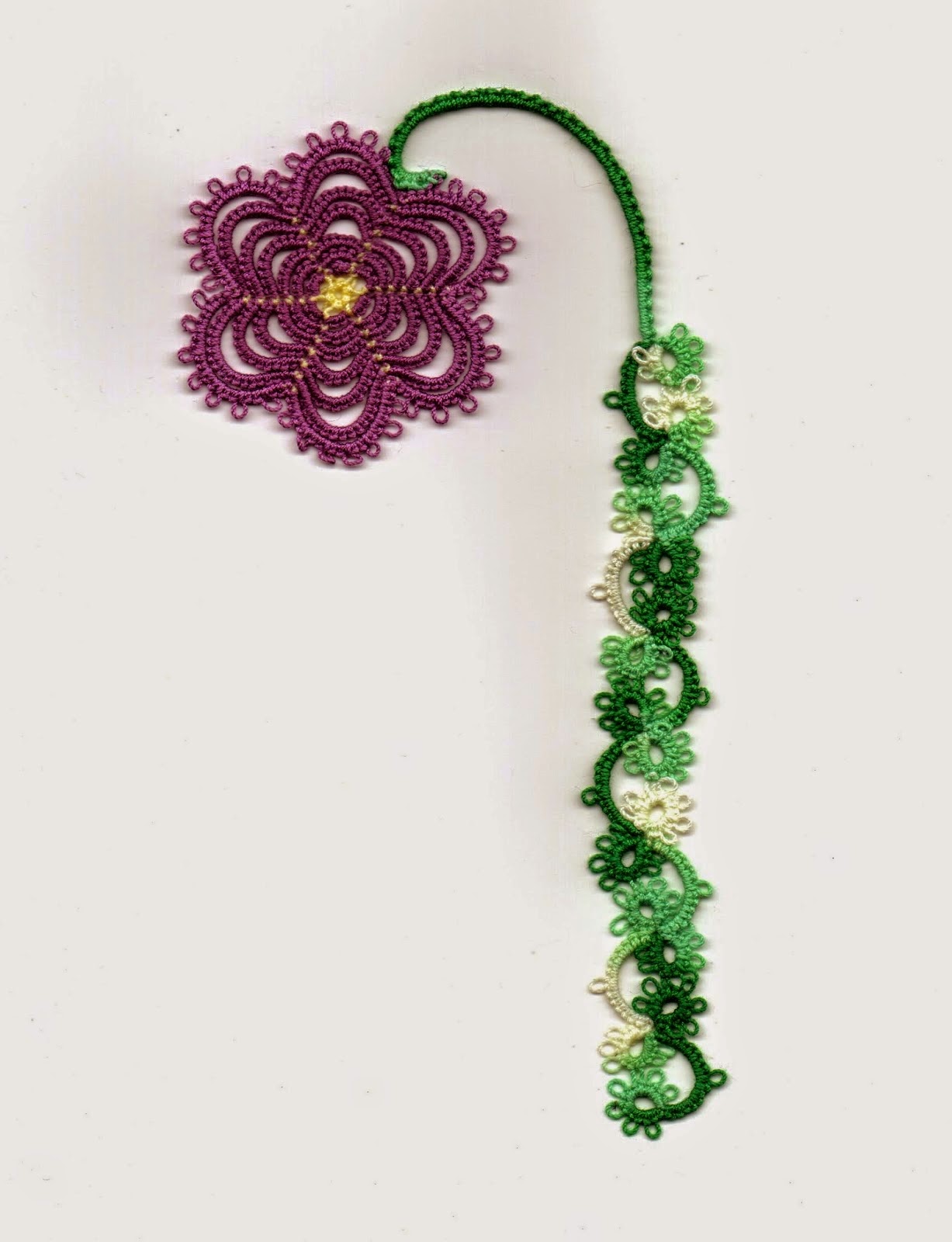 Lelia was at a gathering of the Tollway Tatters where the talented Marilee was celebrating her birthday and tatting this amazing piece of lace. Notice the lovely tatted flower she is wearing. Barbara was tatting from Jon Yusoff's books as was Sue Anna. Diane started a Spinning Wheel Glass Mat by Mary Konior in Omega thread by the time they were packing up, this is what it looked like. Lelia has almost completed her edging from Learn to Tat by Jeannette Baker. 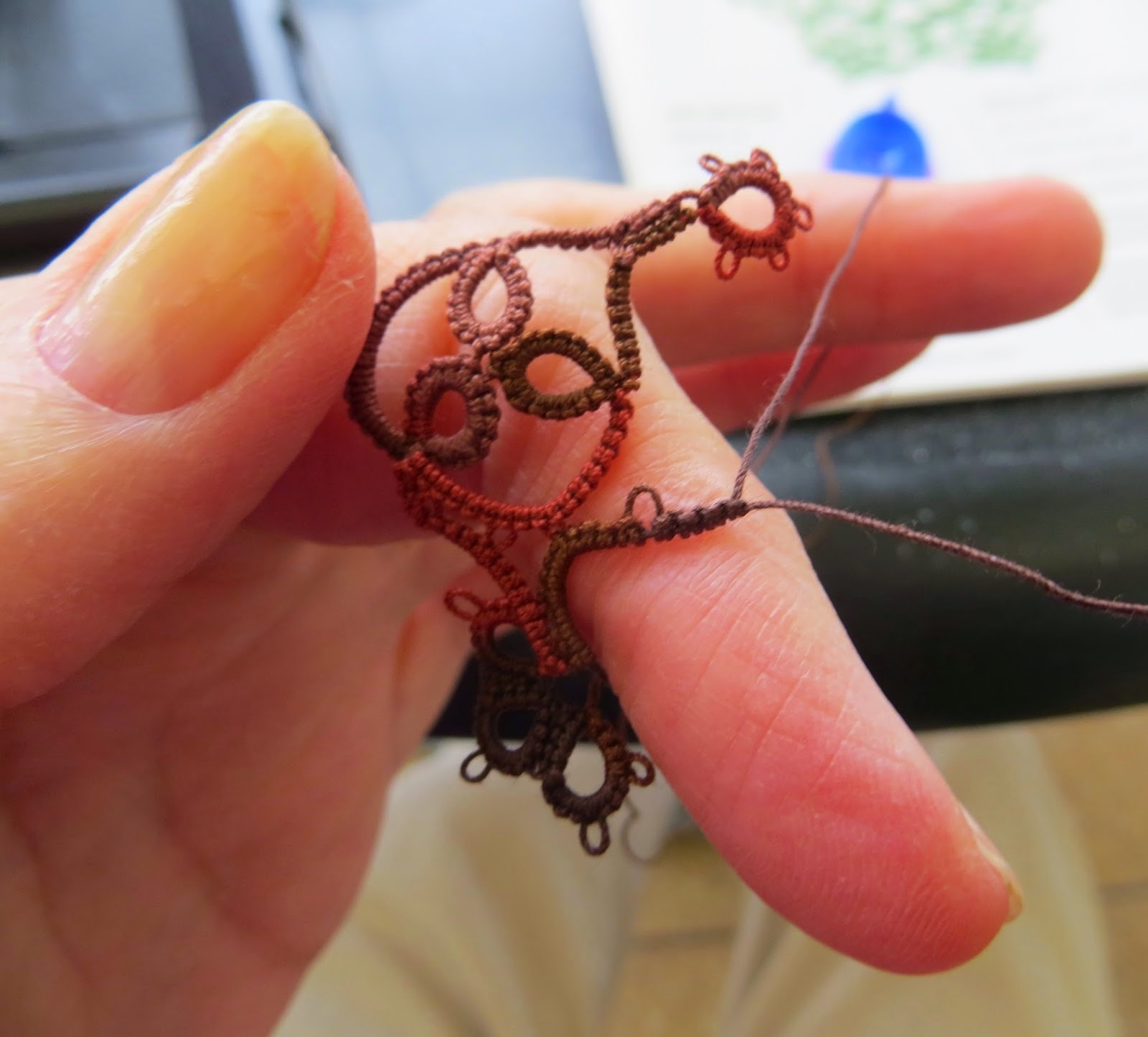 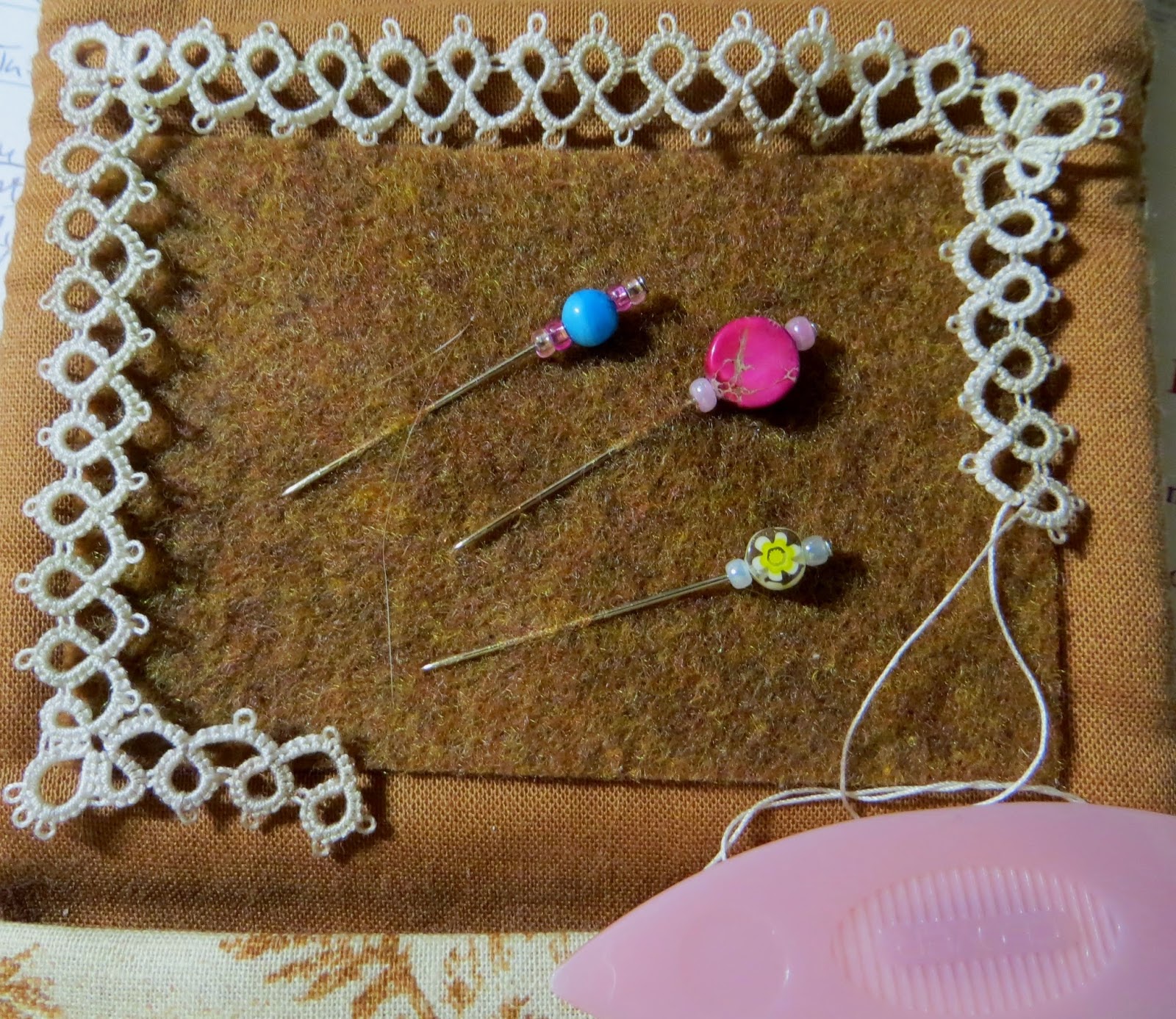 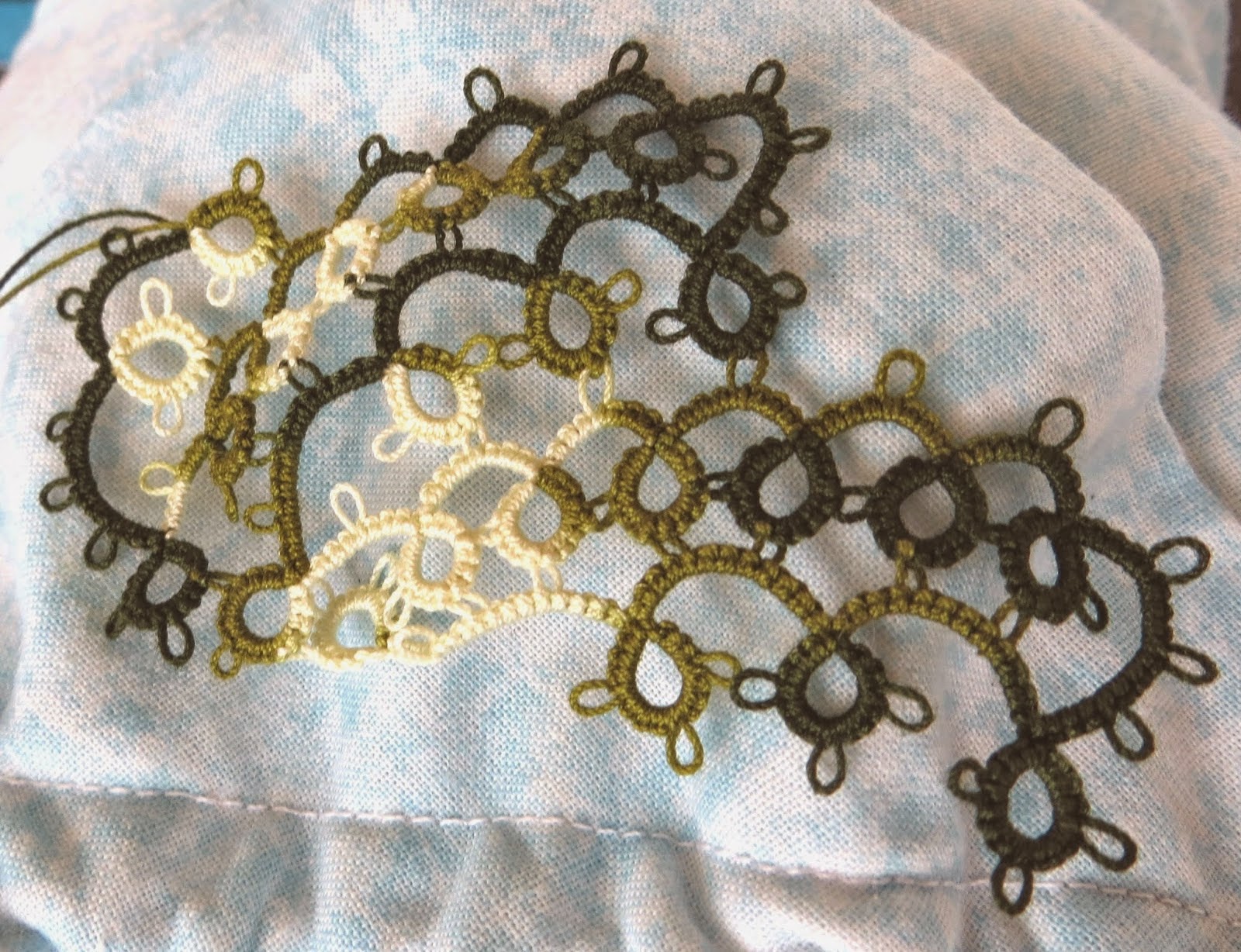 Ancolie finished the flowers for her necklace which was designed by Takako Tikano. The original was finished with a a fine gold necklace chain, but she is contemplating tatting double knots to connect the ground to the clasp and hasn't decided. 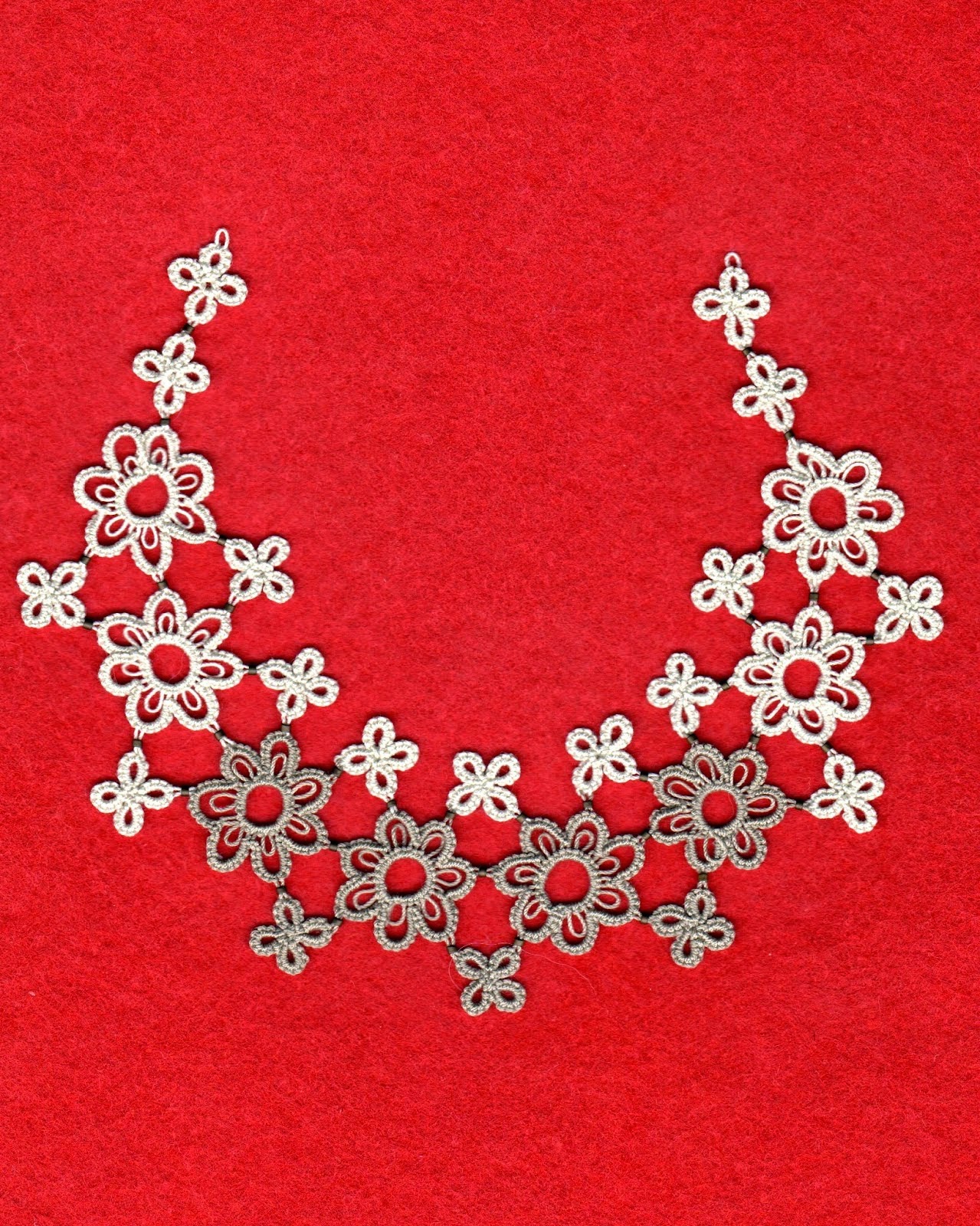 Diane has been busy with fun stuff and getting ready for another school year which hasn't left a lot of tatting time, but she did get another Myra Piper motif completed. Guess what she's making with another Omega thread? A Spinning Wheel Glass Mat. 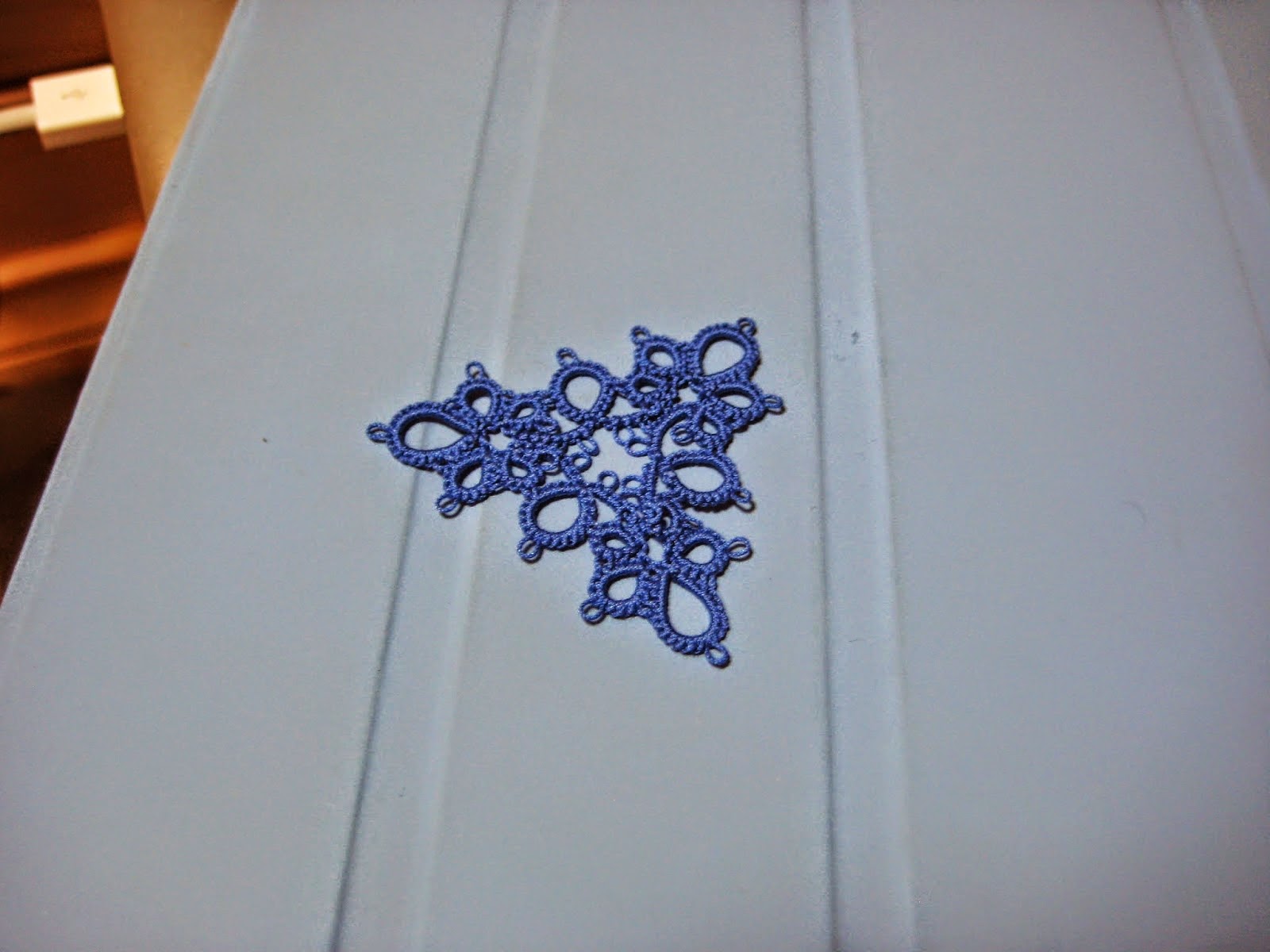 Fox is making progress, as opposed to snipping and restarting. Then this rare #20 Manuela, colour 204 called out to her to be made into a Jan Stawasz motif. The Jan Stawasz Monster Doily is becoming monstrously large. The Kurbatskaya Doily from  the Russian Book is still fun instead of frustrating. 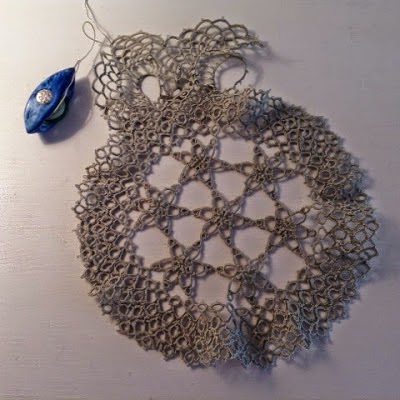 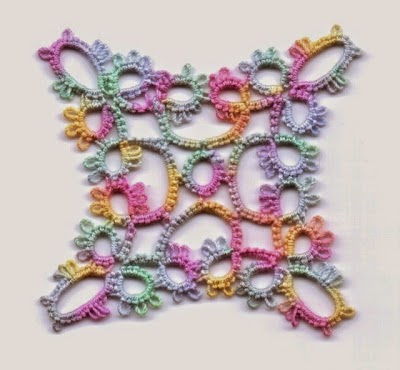 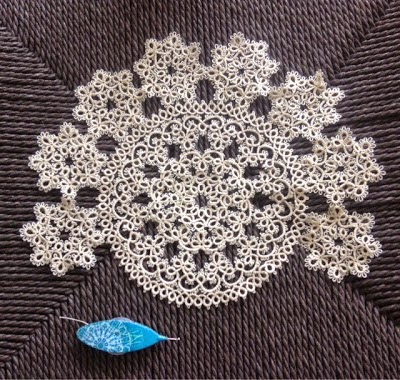 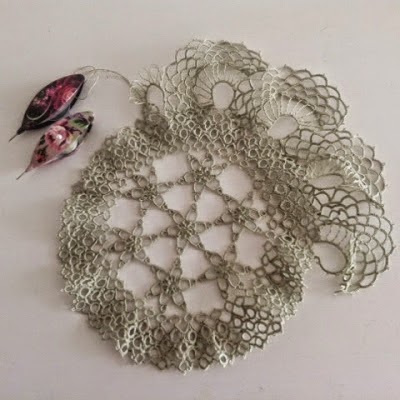 Marie tatted an old clip earring with Messy Jessy in size 20 making a pendant that she calls Messy Leaf. This cameo pendant was tatted with size 40 thread and measures 2 3/4" X 2." 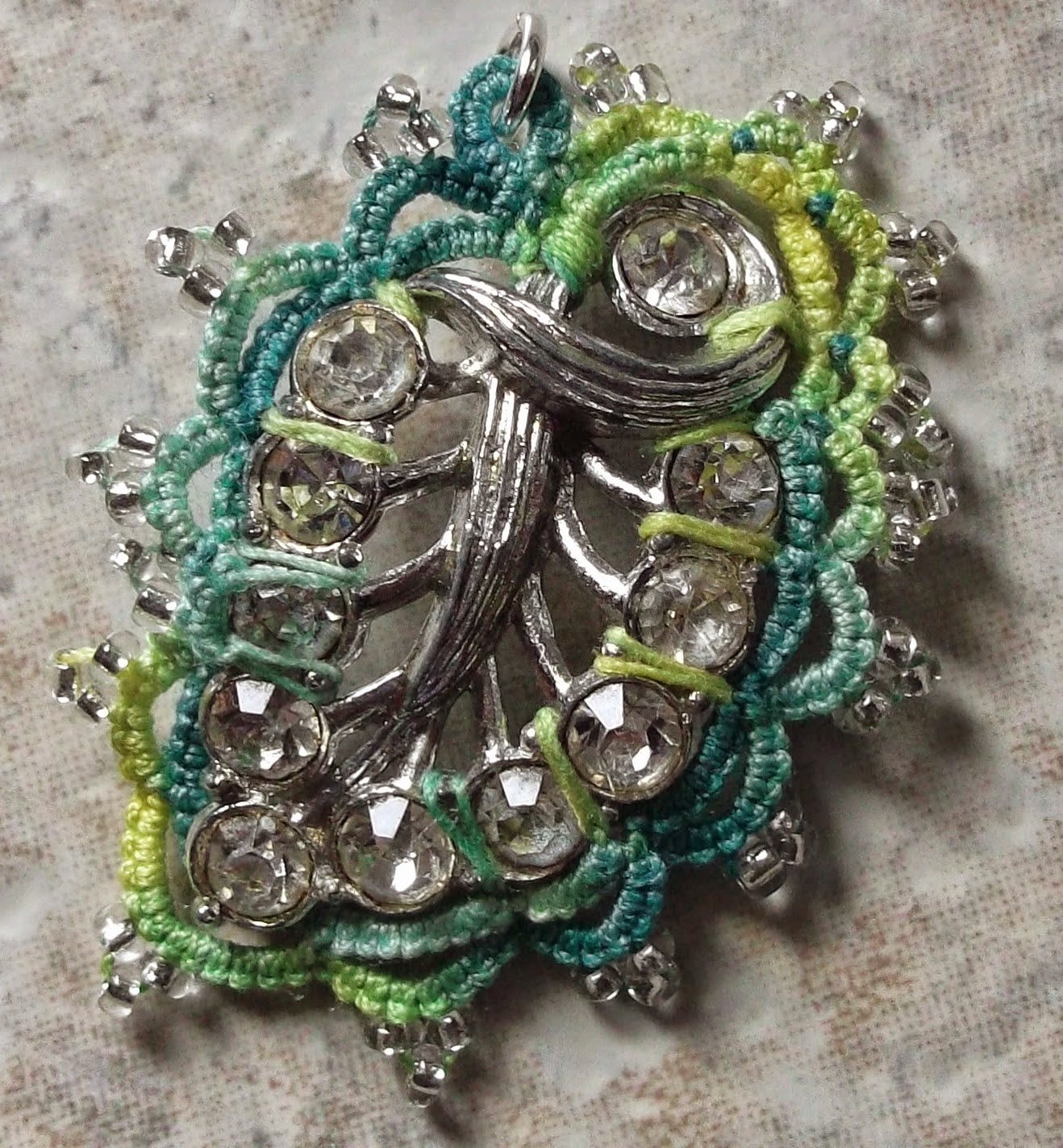 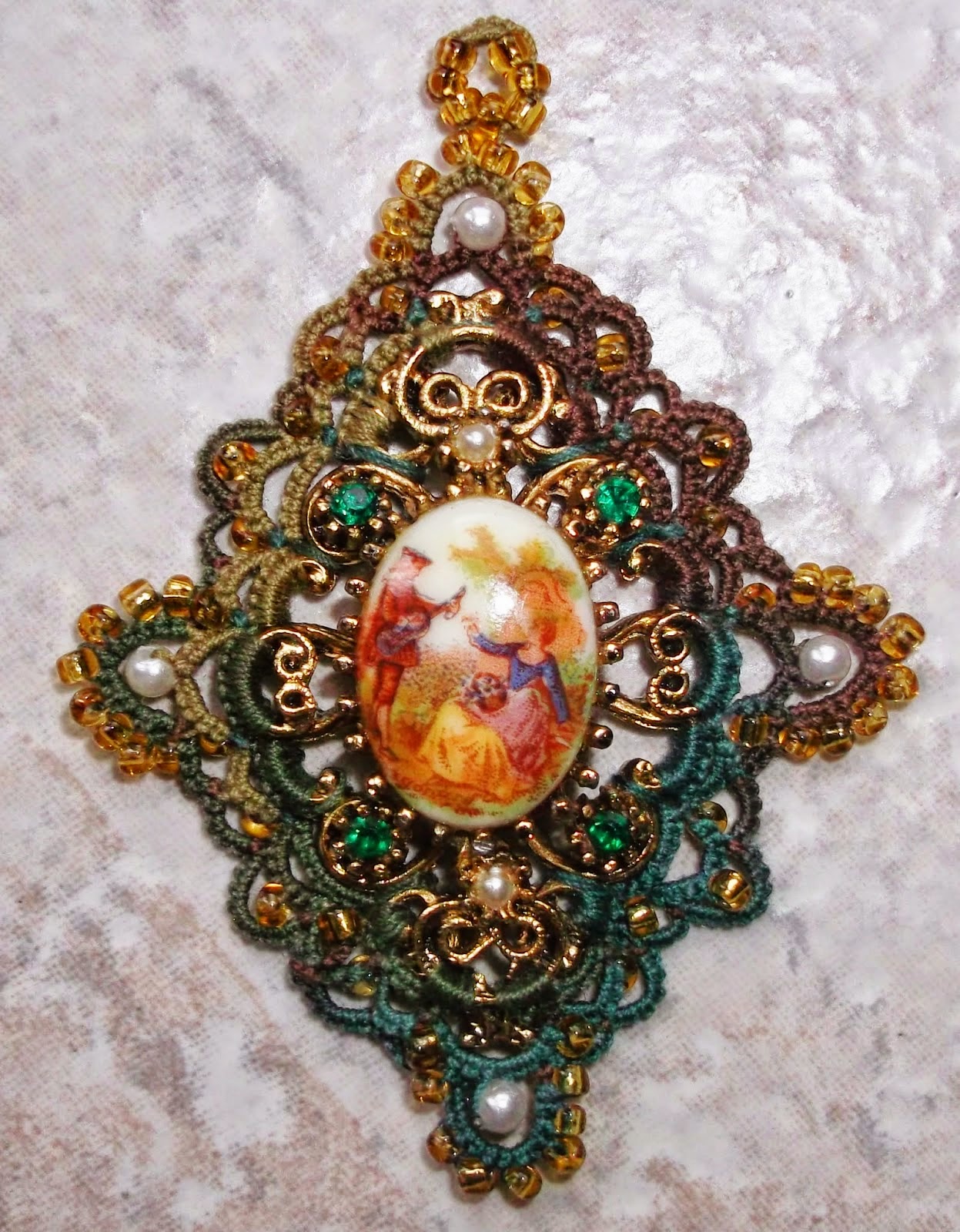 Mica tatted another snowflake from Vida Sunderman's book. This one is called Victorian Snowflake done with Kreinik braid No. 4, which she made a mistake on and didn't want to start over as she has a limited quantity of the thread. 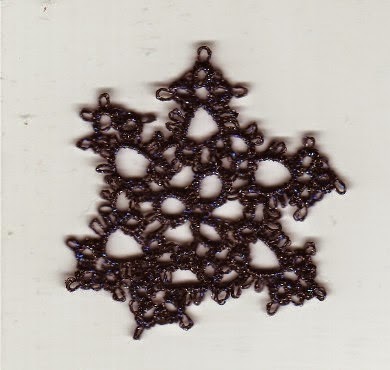 Michelle has the Quatrain runner finished. The pattern is by Frivole and it's taken quite a while to do, but it was certainly worth it. 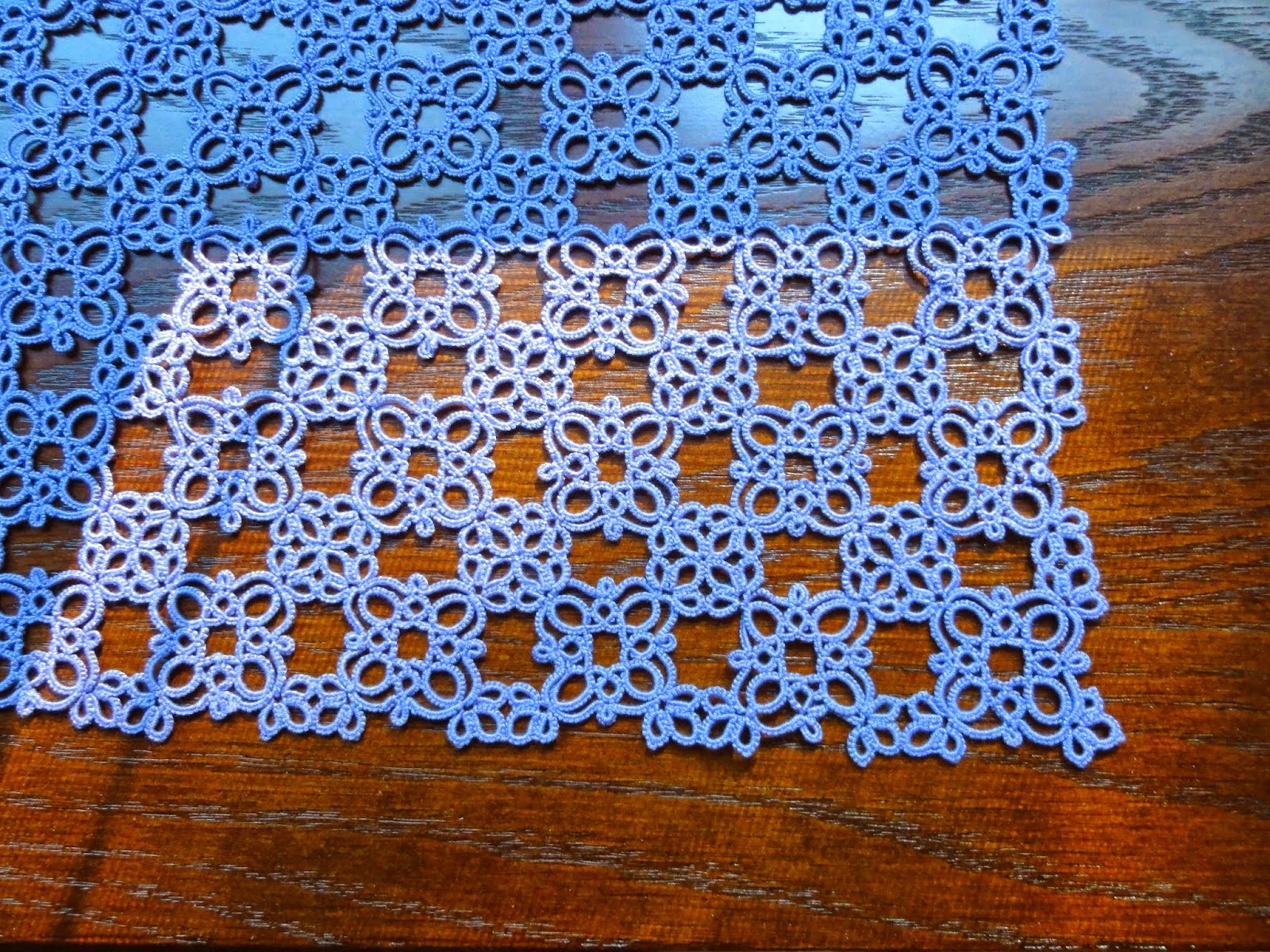 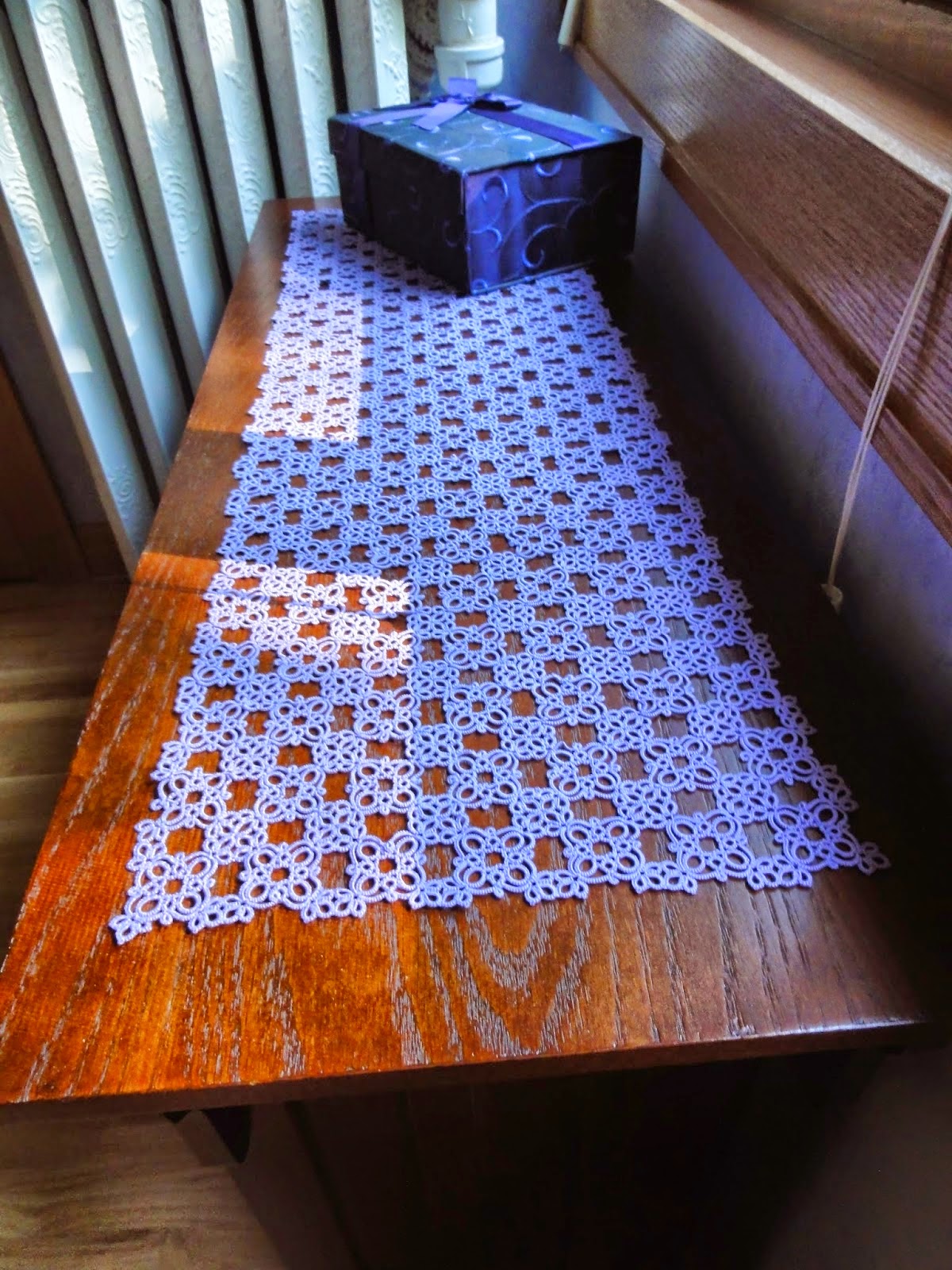 Phyllis shows the colours she has dyed for the Jan Stawasz doily tat-along over at Intatters, solid golden yellow, aquamarine, turquoise and gray. She's working in size 30 as she doesn't want it as large as the Renulek Spring 2014 doily. 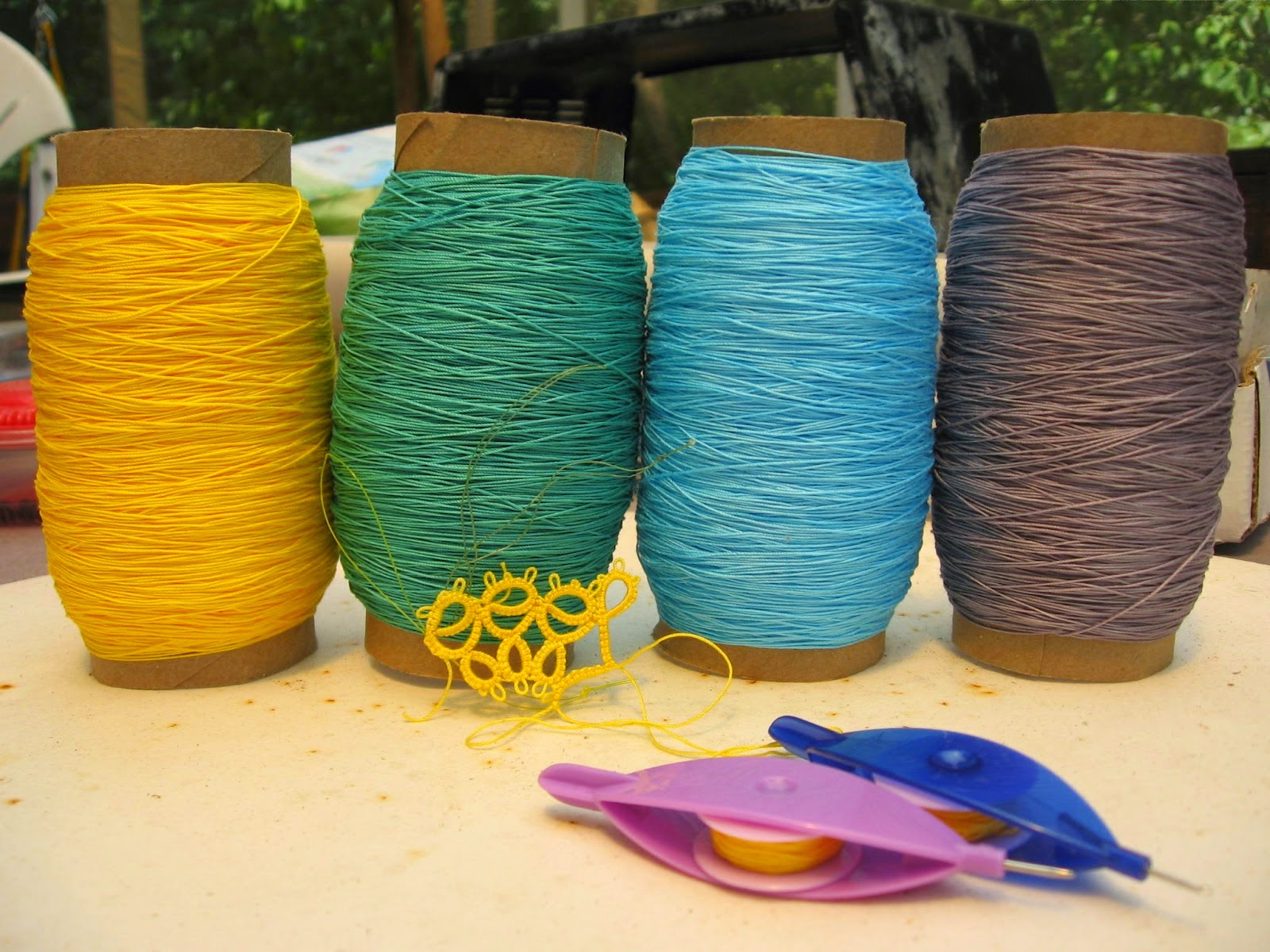 His Kid test tatted many of the pieces for Elaine Gan's new book. 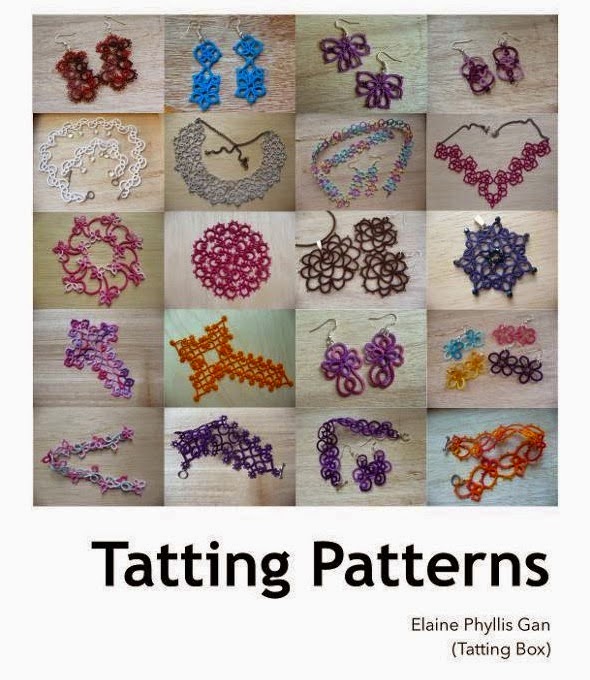