Muskaan was coaxed into learning split chains by Leanne Boyd's Acorn Pattern. She used AMC size 20 Cadmium Orange #0307 & Brown #0355 and initially she was a bit confused on which loop/thread to pull until she realized it needed CWJ. Her next one was done in AMC size 20  Mehandi Green #0256 & Light Brown #0368. She designed an oak leaf, in keeping with the to-and-fro chains in the acorn. She liked the slightly different shape of the Hope Butterfly by Sherry Pence done in AMC size 20 Brown #0355 & Cadmium Orange #0307 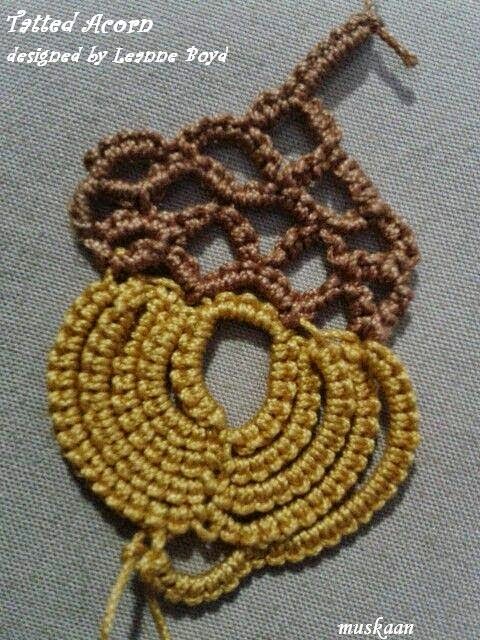 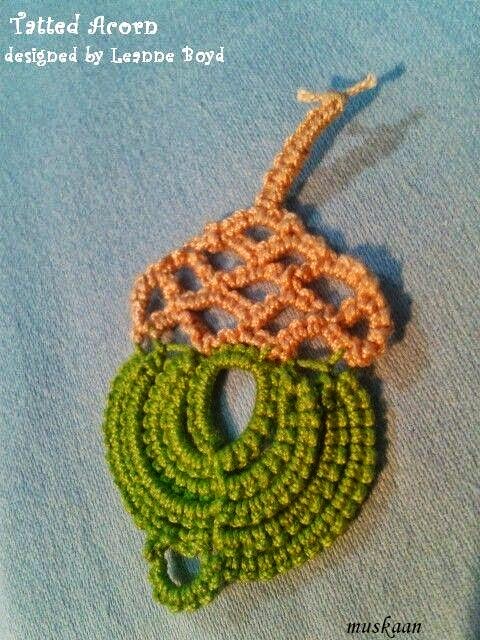 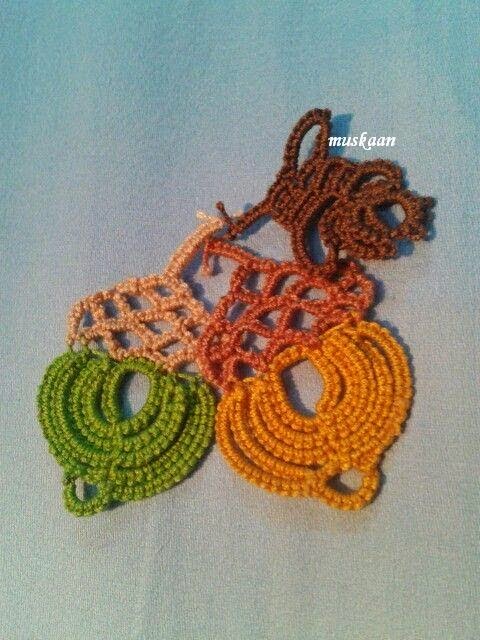 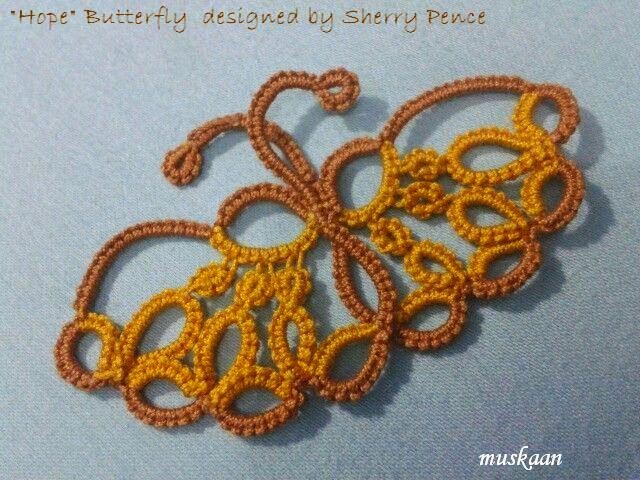 Batty Tatter is behind in her posting and playing catch up showing us the cards and  caps she has done. On the hearts she used for cards she glued on some little white beads. The caps have motifs on the front and matching edgings around the bills. She also found a couple smaller child size caps like the last pink one, that she did similar decorations for. 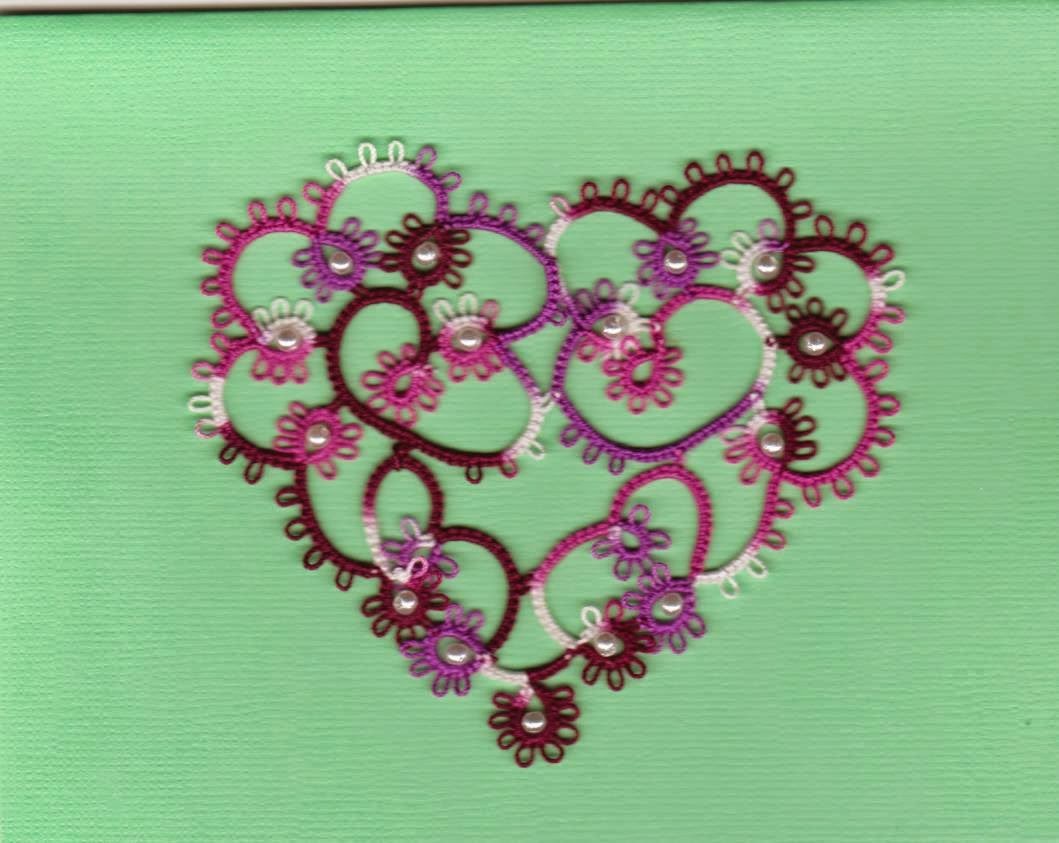 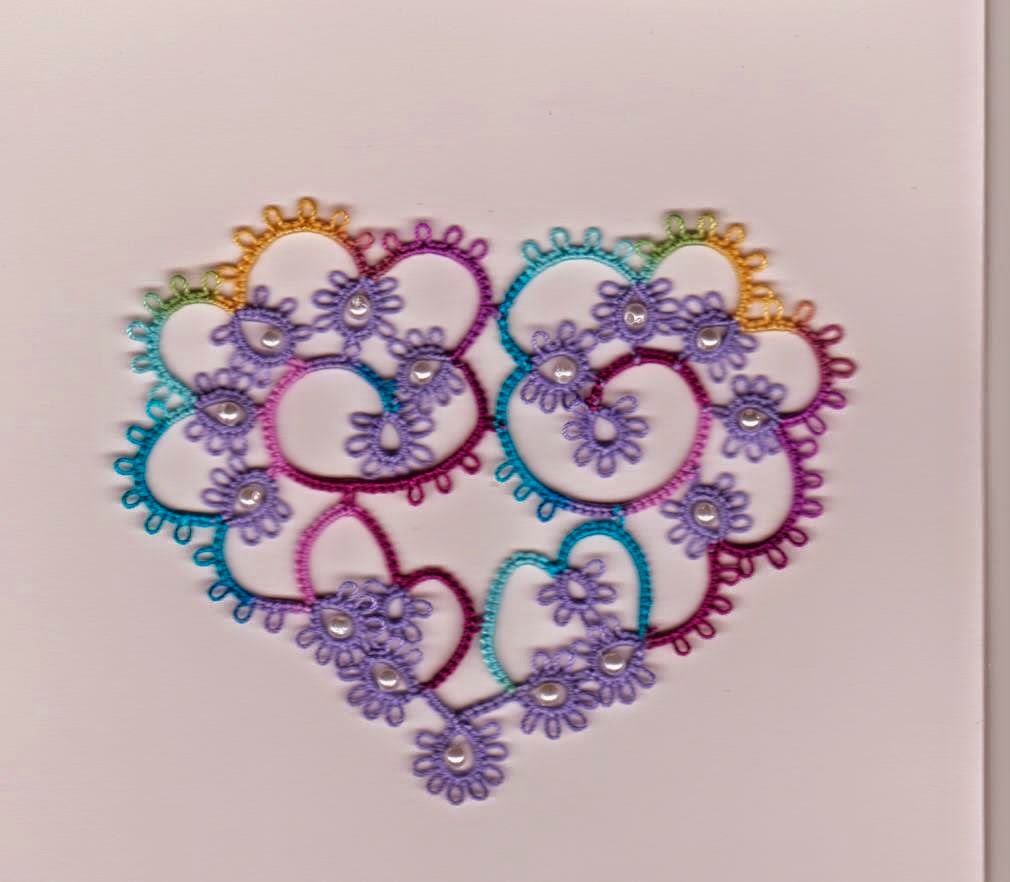 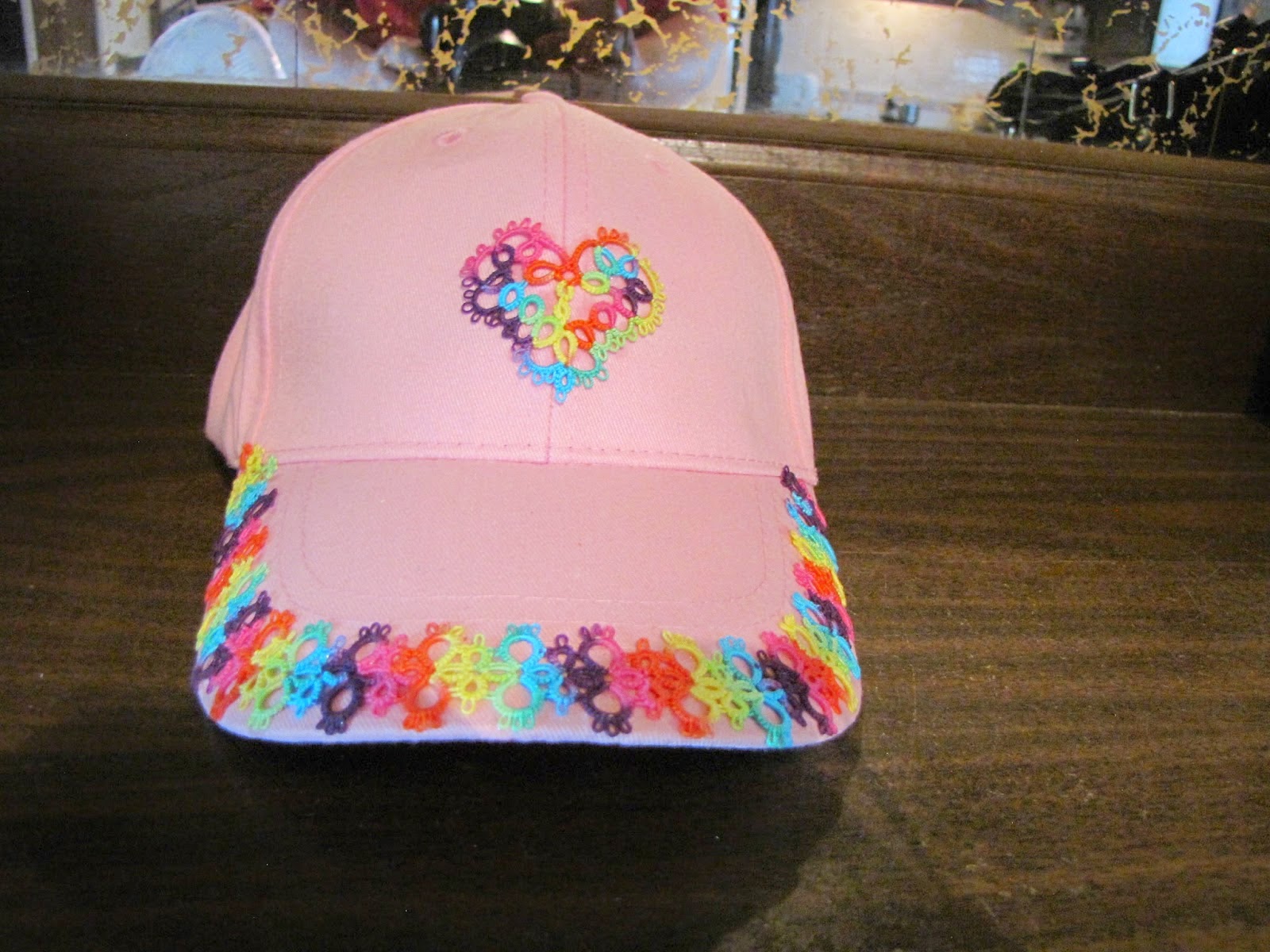 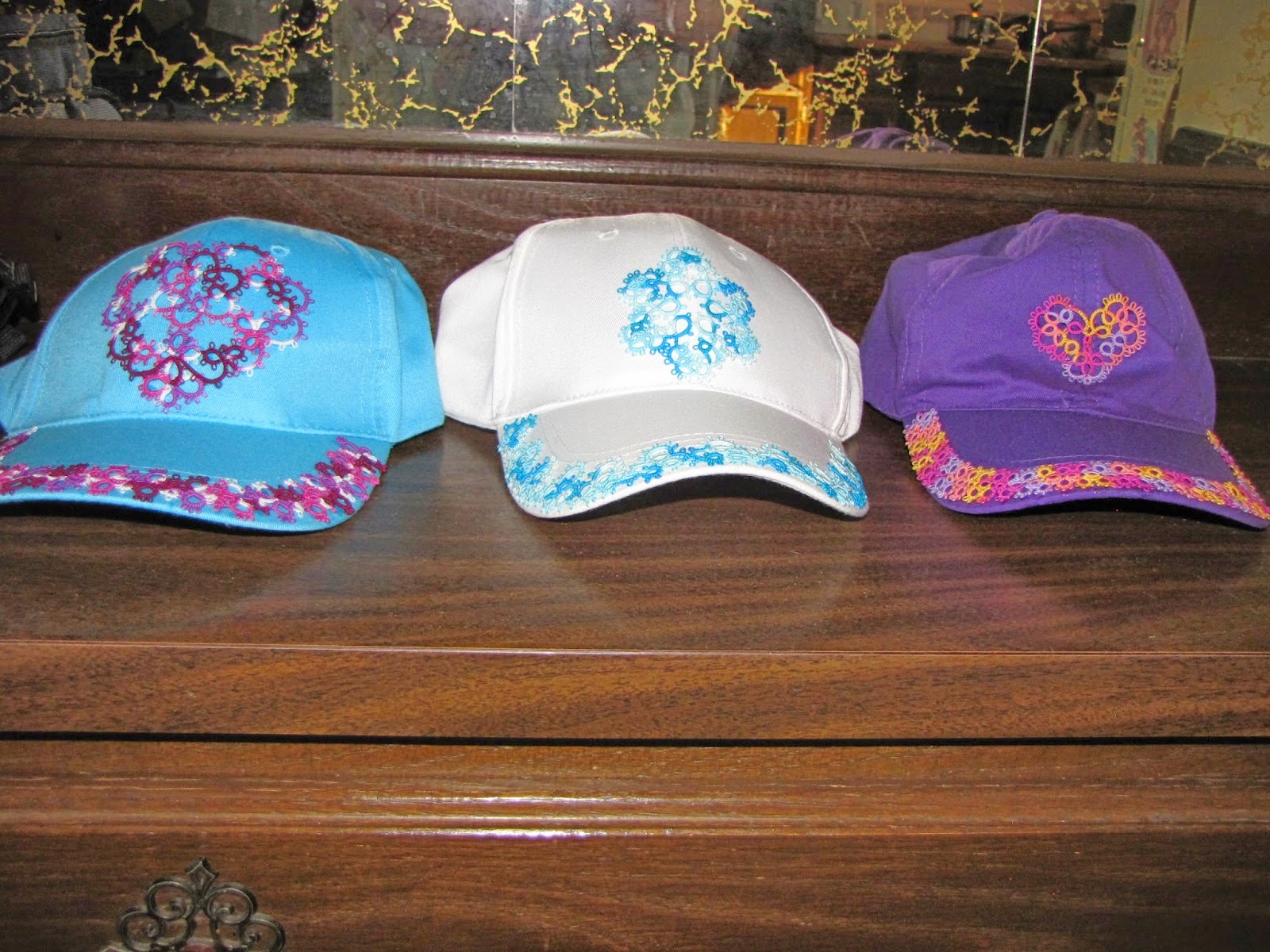 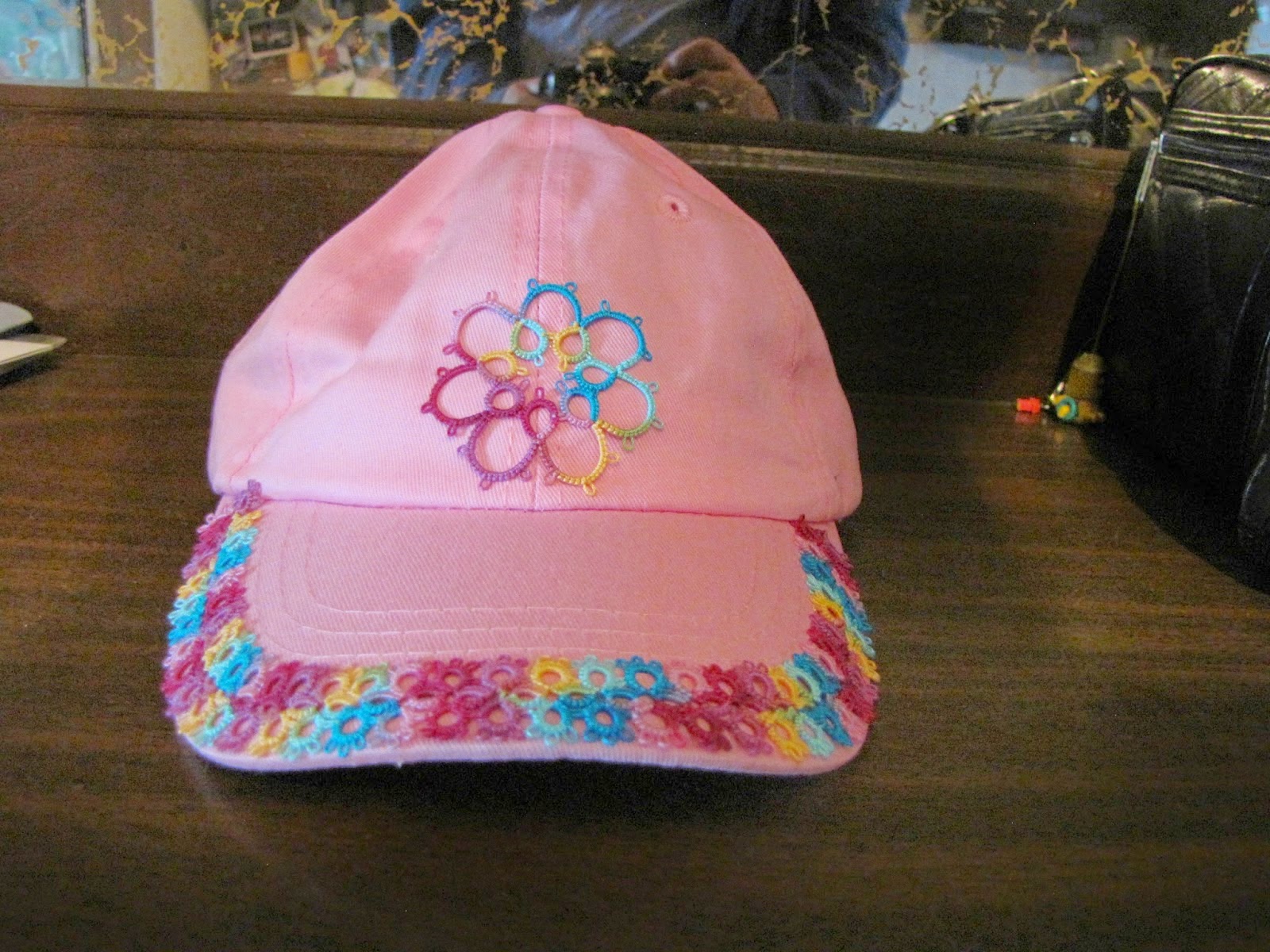 Lilas has given up on the 3 strand Cebelia thread and uses DMC for projects in size 80 which she can get in France, but when she wants to do a project in size 40 thread she needs to go to Lizbeth if she wants colours like this turquoise blue. 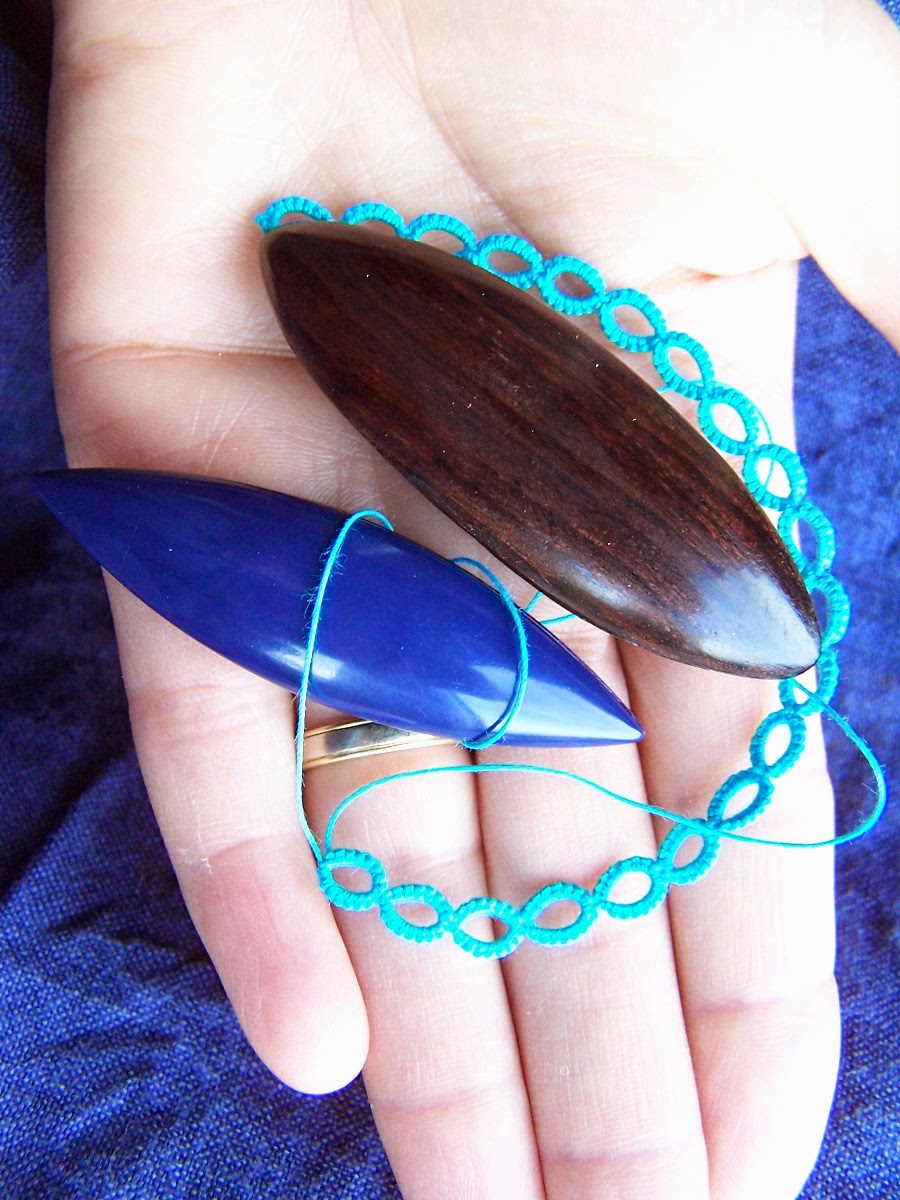 Julie had some time to tat at the beach, resulting in a completed Stumpy bookmark by Kersti Anear.

Jessica has done up some more HDT and the latest in sizes 10 and 20 is labelled Dusty Rose. 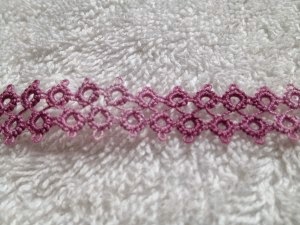 Fox did this motif in size 12 DMC Perle which was soft and fuzzy and not fun to un-tat. 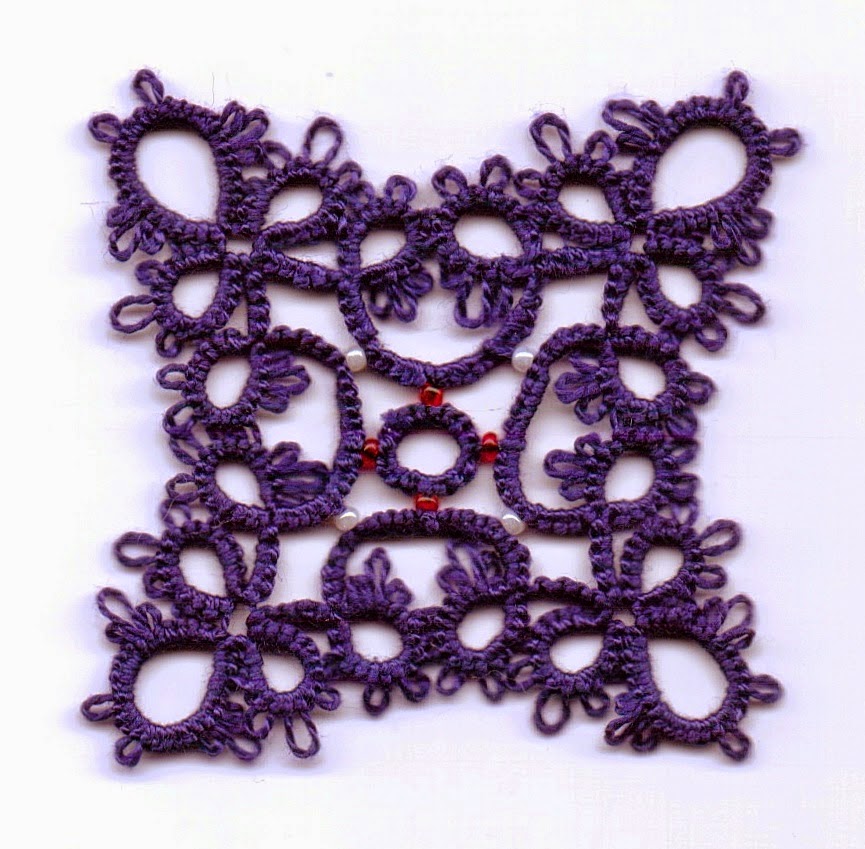 Kristen's tatting skills are improving and she's no longer intimidated by a Jan Stawasz pattern as proven by this motif she completed from Tatting Theory and Patterns. This doily that she's working on is from the same publication. 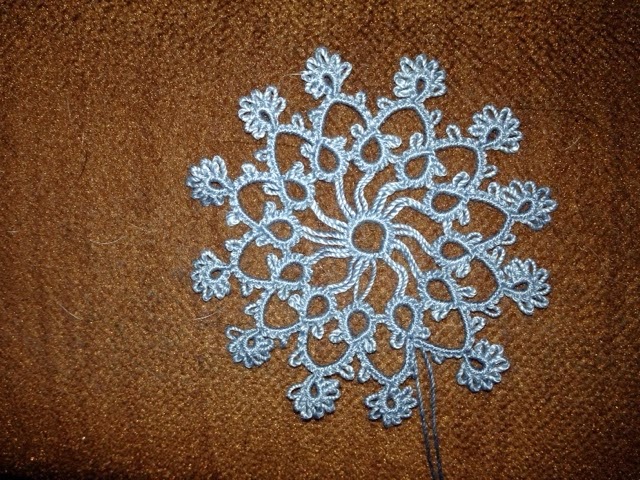 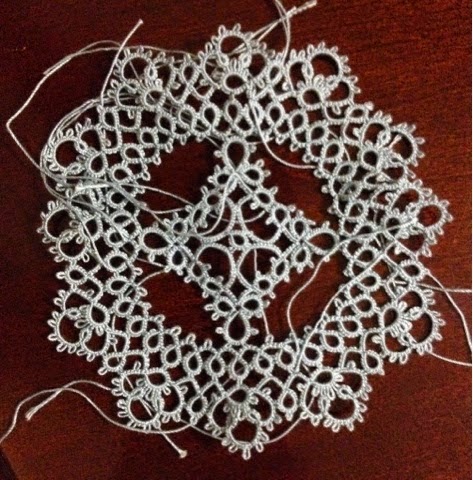 Marie liked the design of the Egyptian pin so much she replicated it in a pendant that she plans to keep. Of course what fun are pendant and earrings without a matching bracelet ,which she was fortunate to have enough thread to complete, as the thread is no longer made. 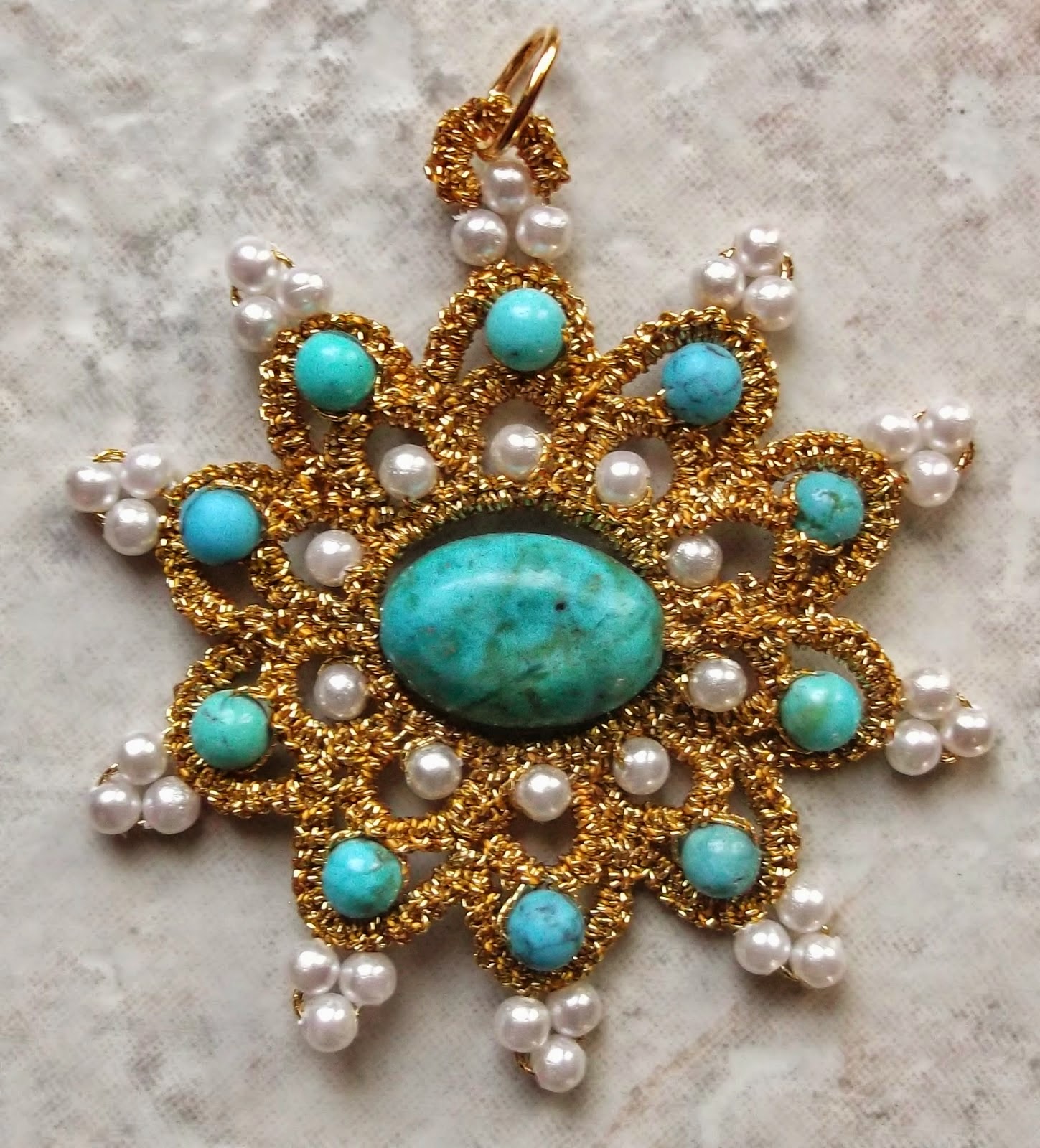 Mica did a small pattern from one of her Japanese books that had overlapping chains which is easy enough to do in the recommended size 20 thread, but in DMC special dentelles size 80 in ecru, the shuttle was too large so she had to order a celtic shuttle to tat it. 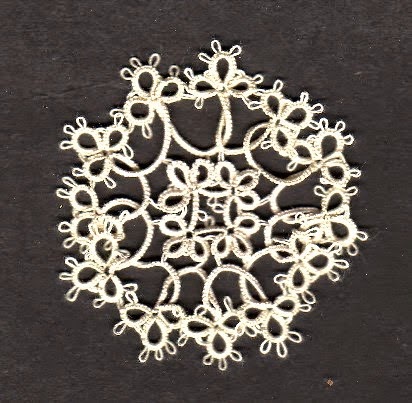 Phyllis  shows us one of the scholarship quilts being raffled off for Tat Days. She has started started the monster Jan Stawasz Doily and is working he way around row 3 although going from the size 10 of her last project to size 30 for this one, is quite a change. 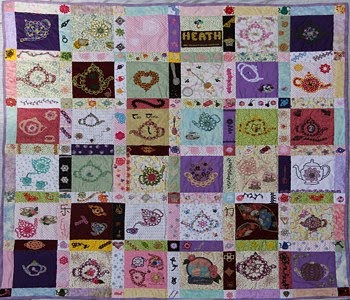 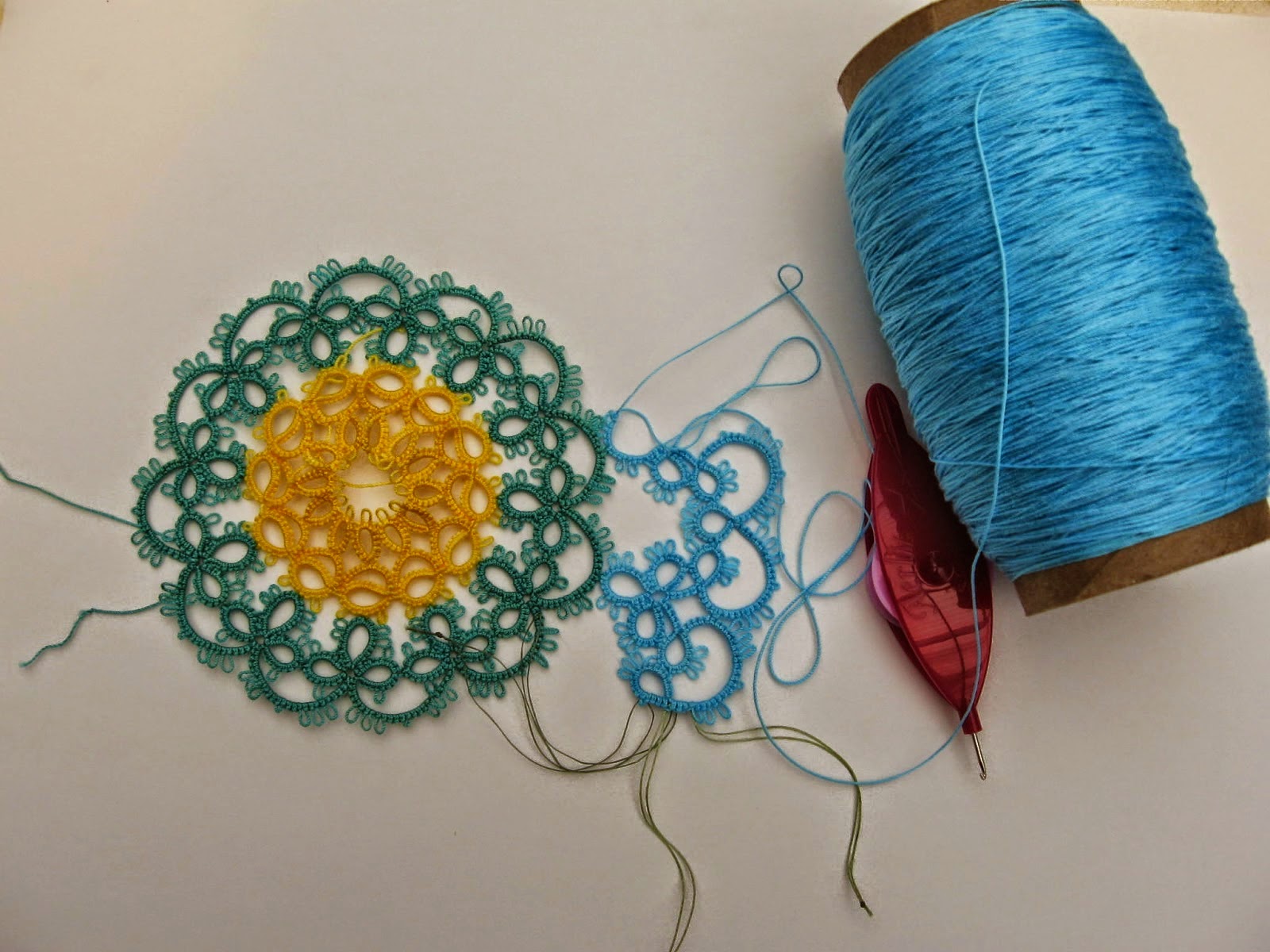 Sue had a request for 2 small dangles done in black and she was glad she had picked up some smaller crosses, because the rainbow crosses wouldn't work. Elaine P. Gan's Firm Foundation Cross was tatted in size 40 Lizbeth Juicy Watermelon. Next is a suncatcher she just finished, using a motif from the Big Book of Tatting called Dancing Snowflake and an outer round of her own design done in size 40 Lizbeth Green Coral Sea. Two more suncatchers she did, the first in her usual pattern but the second is from the Big Book of Tatting, called Ice Crystals Snowflake, tatted in size 40 Lizbeth Elderberry Jam. 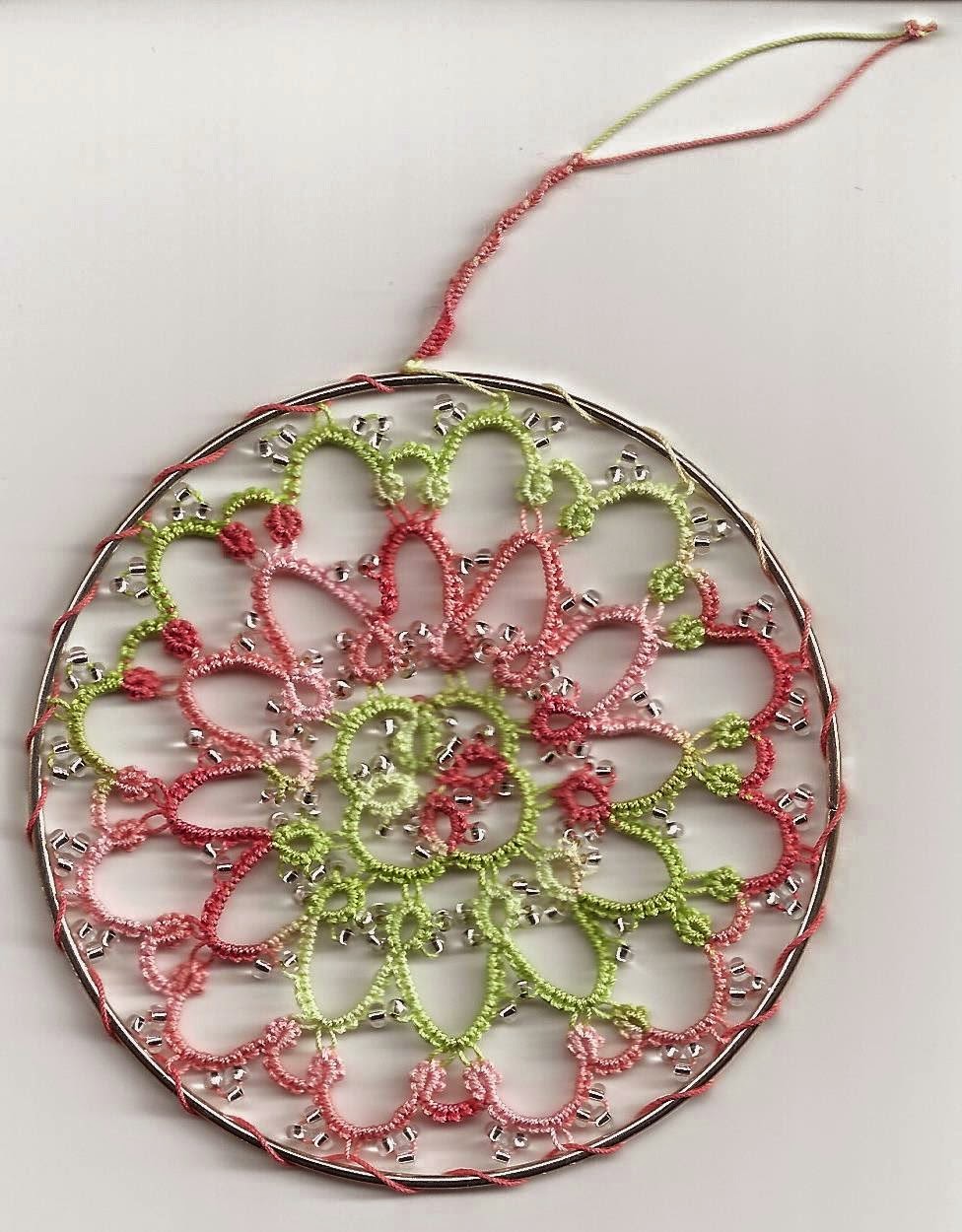