Jenn participated in a tatting tool exchange and was delighted with the gifts she received which included a tiny crochet hook with an attached motif.

Muskaan continued playing with a tatted braid and converted a macrame pattern to something she is calling a mac-tatted braid. This one was made into a bracelet. She has added the instructions for making it onto her blog. 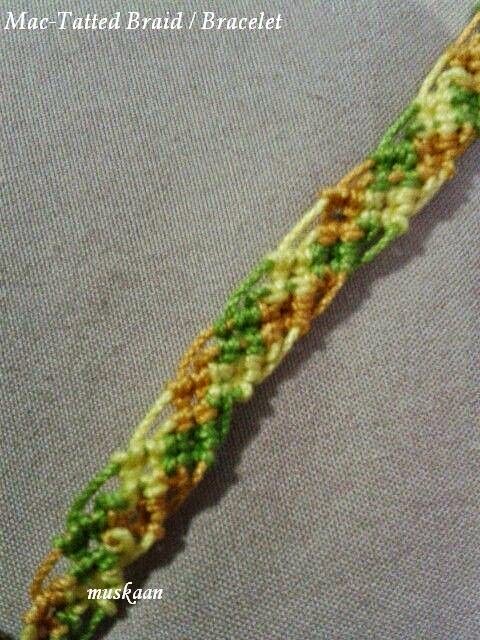 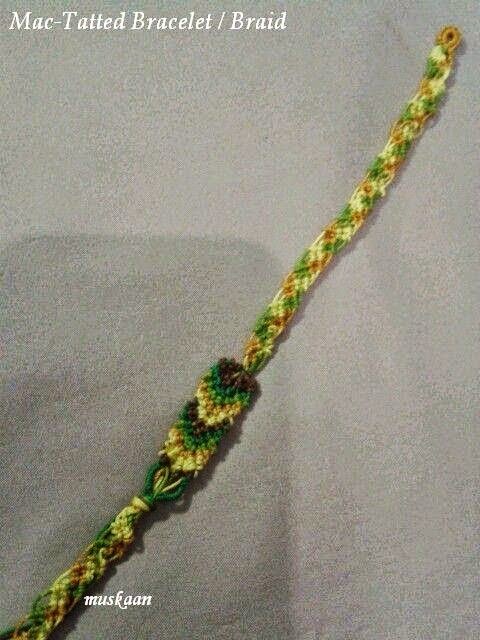 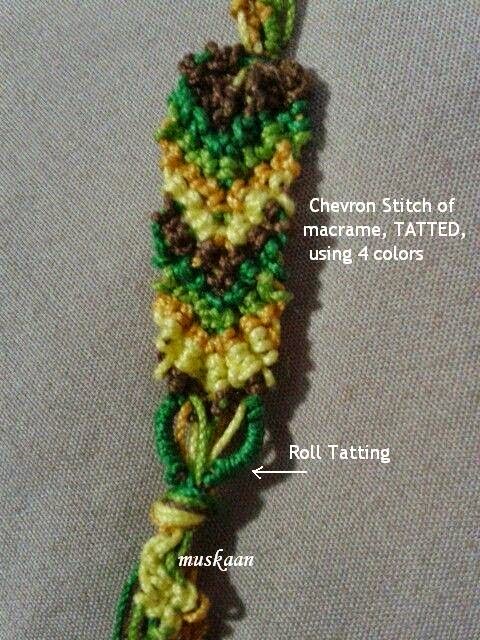 Lilas made this new bracelet design with the first flower of the previous pattern and it makes the sixteenth piece of jewelry for the 25 motif challenge. 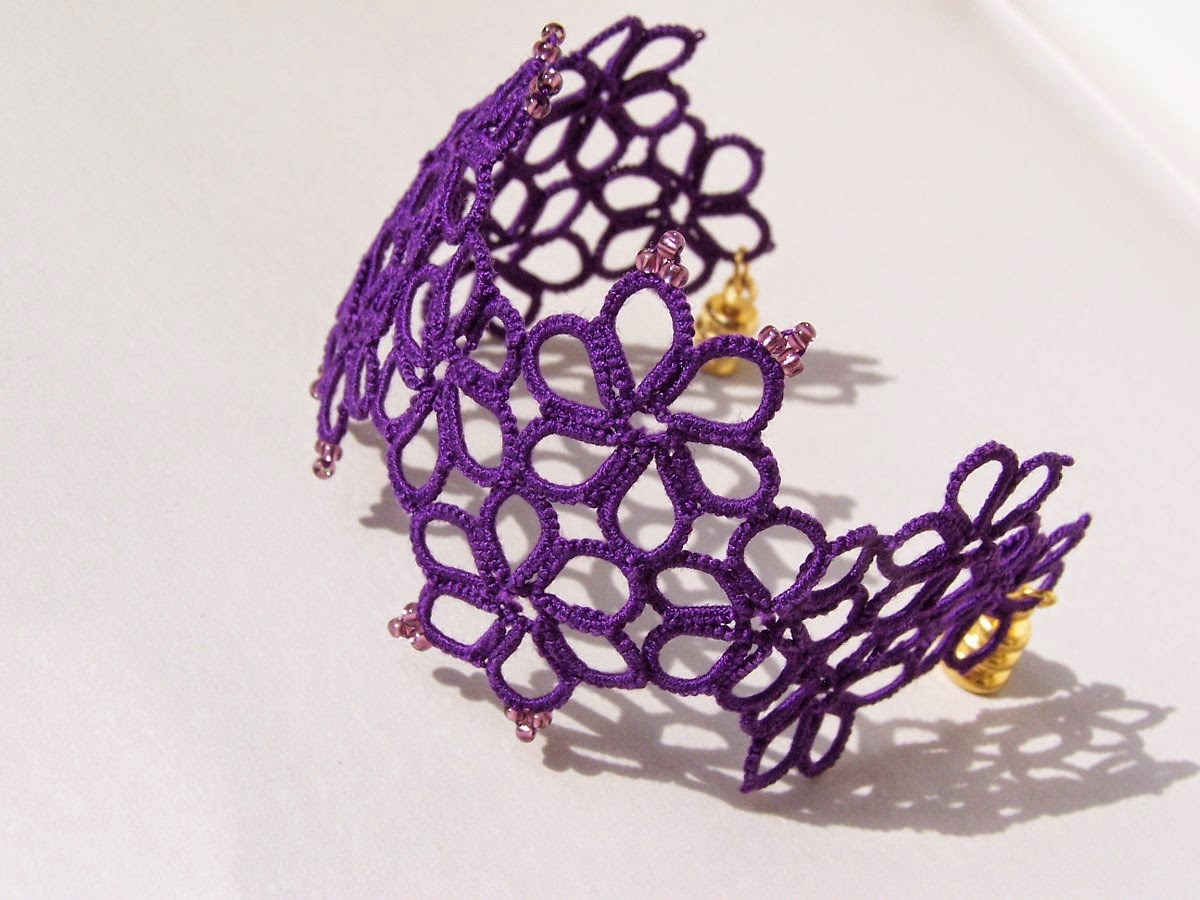 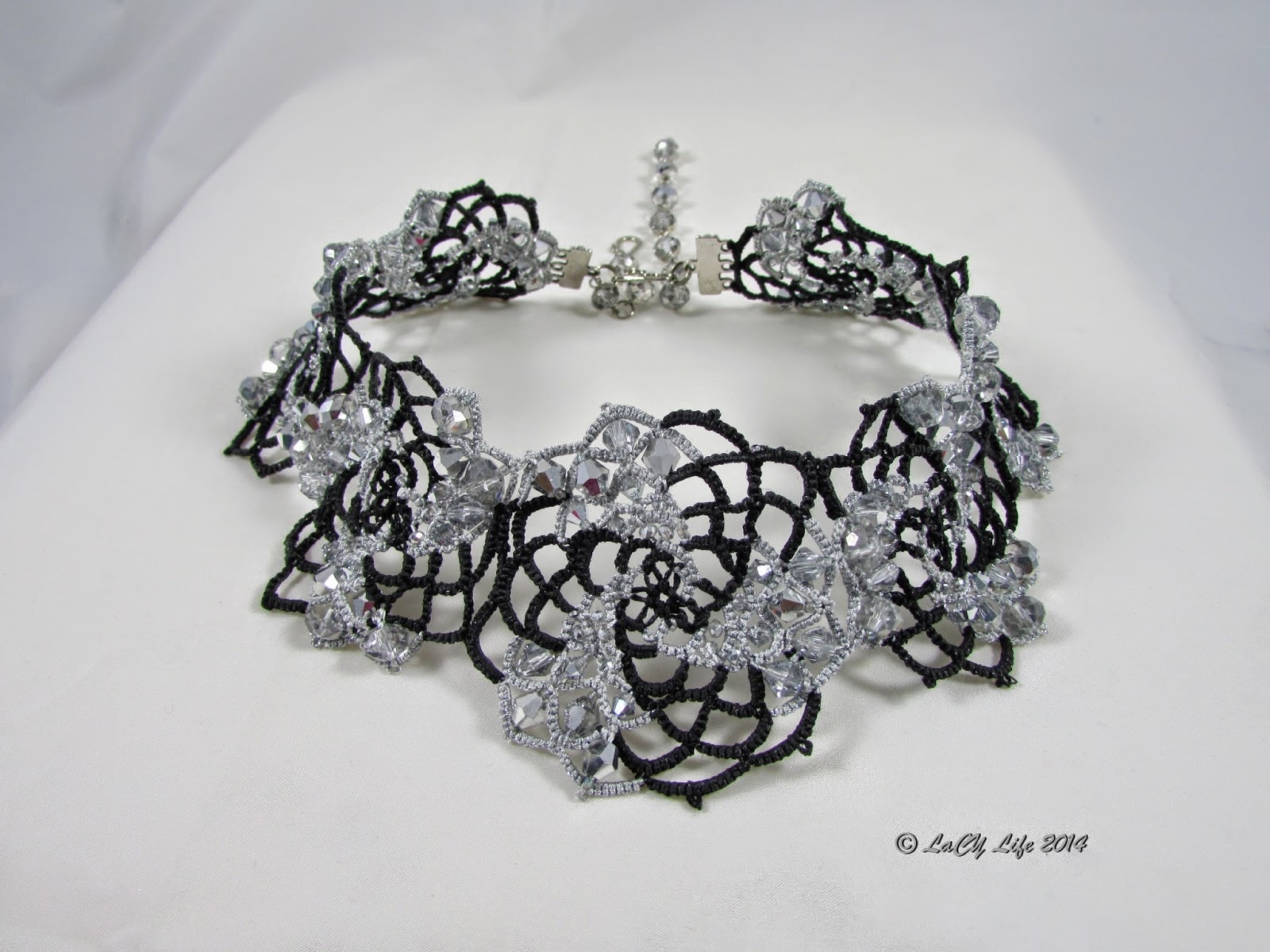 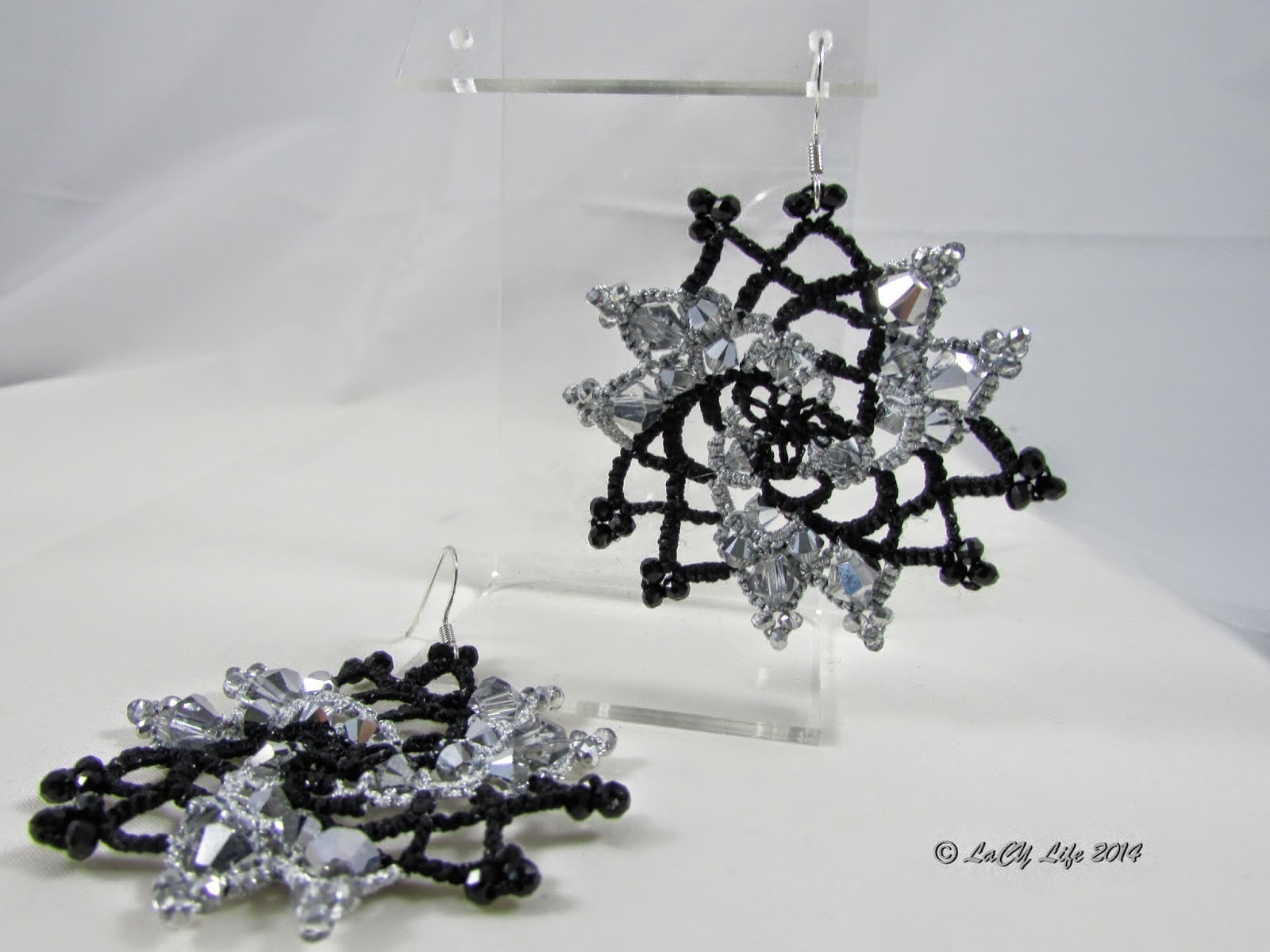 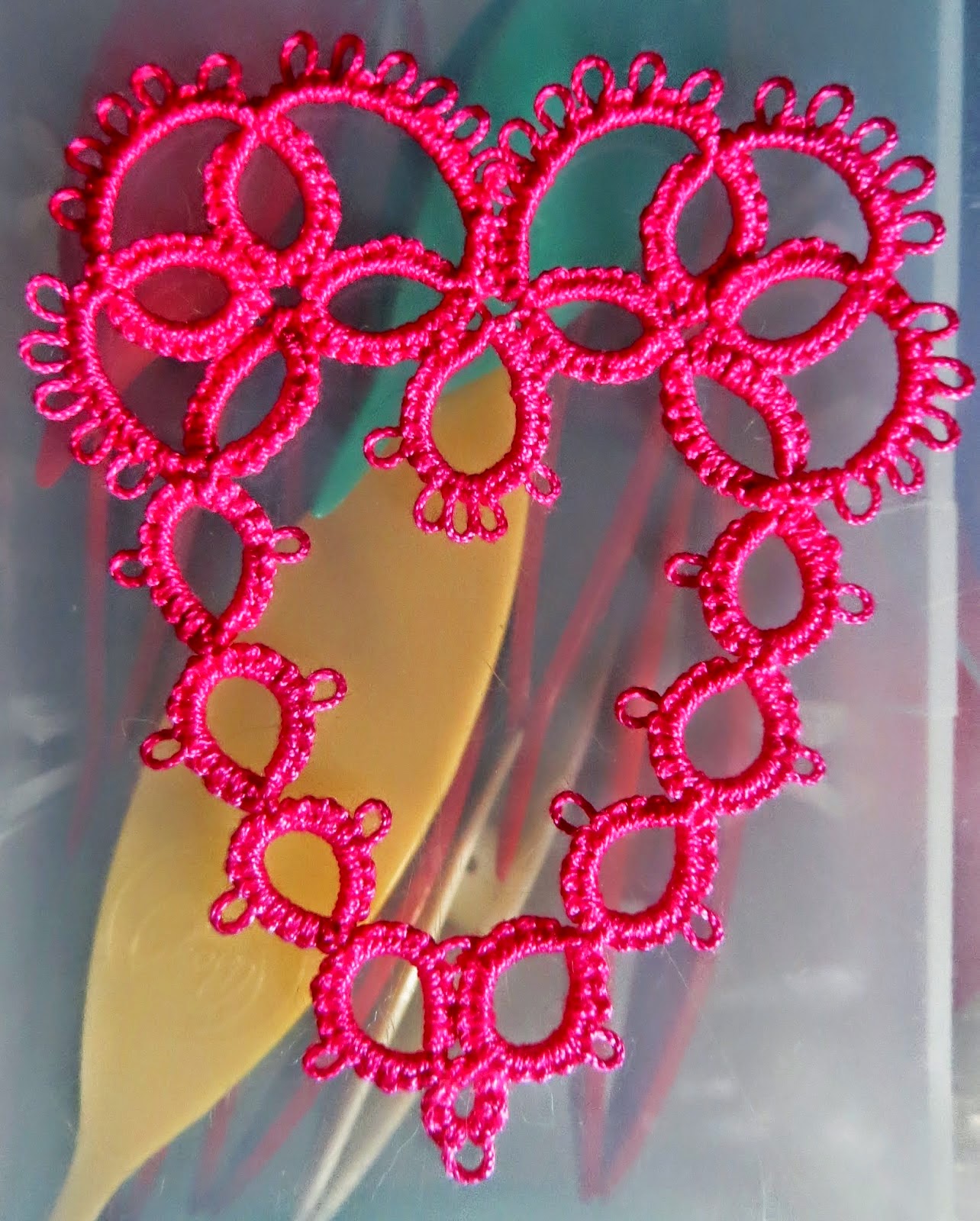 Diane had ten girls show up for tatting on the porch and while they worked so did Diane and now she only has eight pattern repeats to go on round 8. She'd ready for round 9. 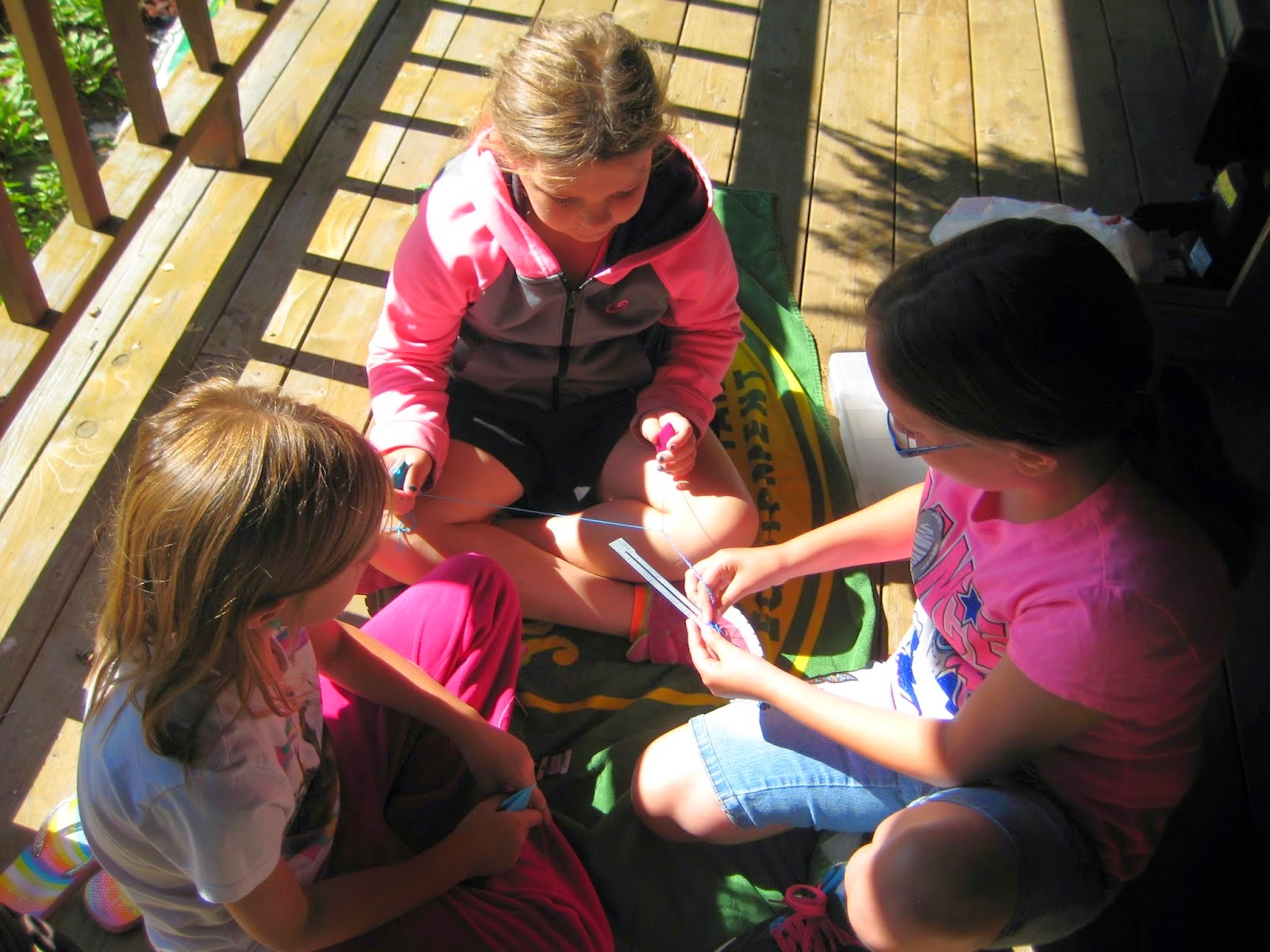 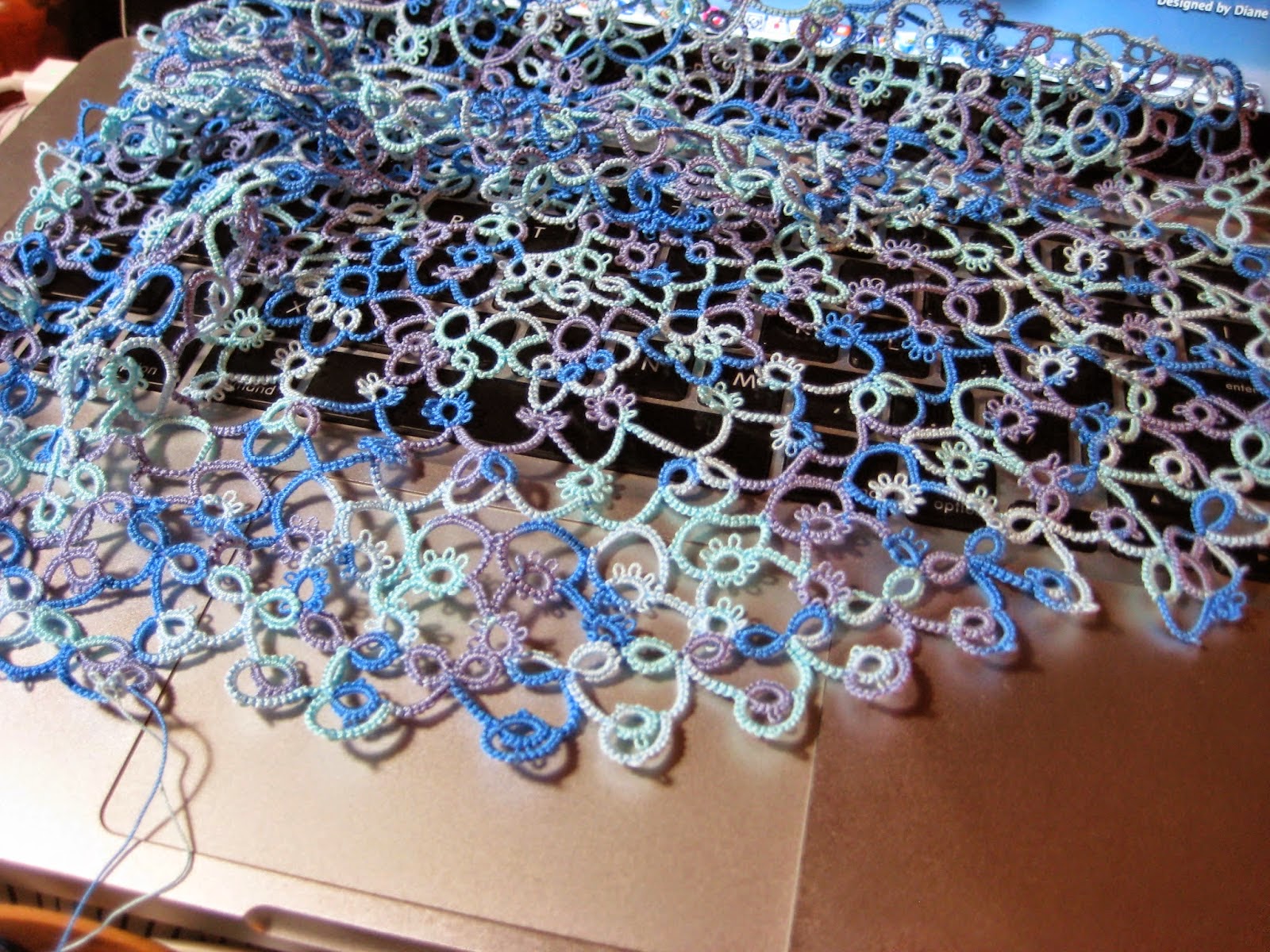 Fox tatted Bremen designed by Adelheid Dangela  from “Occhi Patchwork” and it's two inches across, tatted with Sulky thread. She wanted to tat this Pomegranate design by Anne Orr, which she had seen on a hankie on Frivole’s blog. One of Karey Solomon’s HDTs size 40 blends yellow, light rose, blue and green which are the same shades as the threads embroidered on the hankie. She's using Mary Konior’s Gossip pattern and hoping that she has enough thread, but if not she'll use another thread for the second row. Barntrup designed by Adelheid Dangela,  from “Occhi Patchwork” is about two inches across in size 60 thread. She is wondering how you tat the central row of the Bremen motif and not have it get all out of shape? 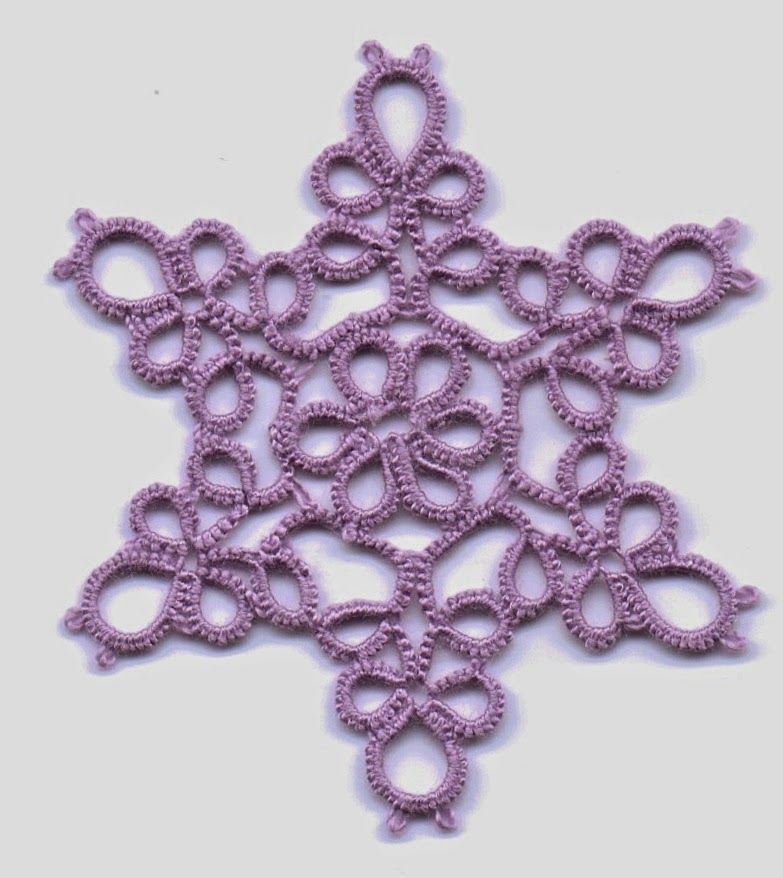 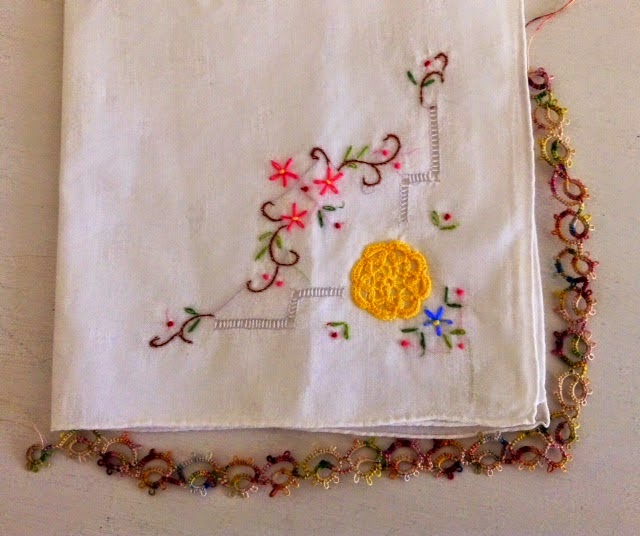 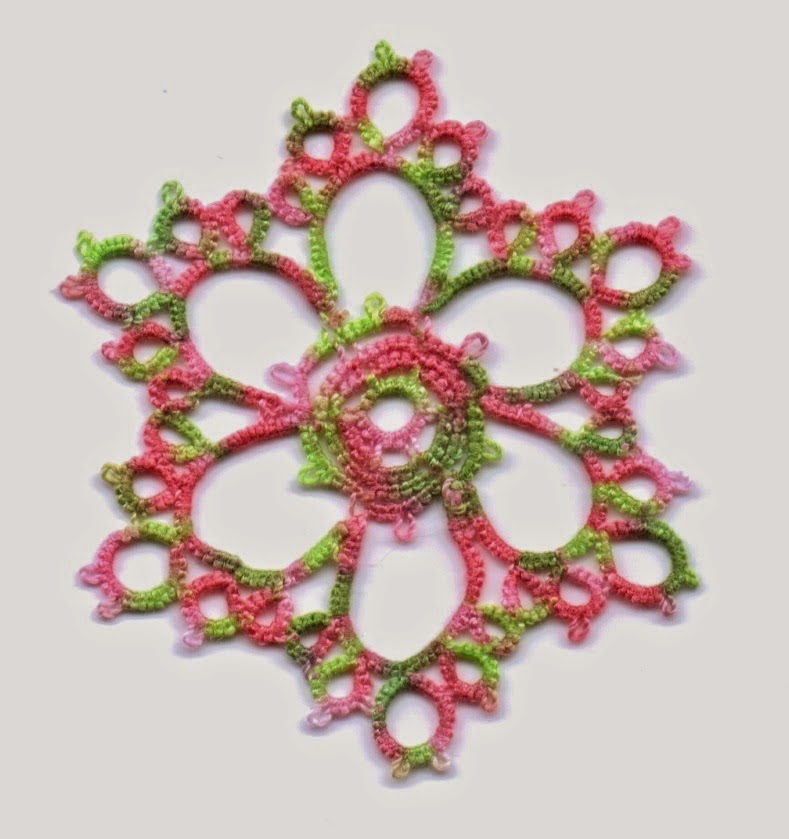 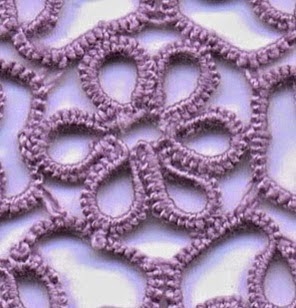 Kristen found going by train is a great way to travel and tat as she worked on Marilee Rockley's Arches doily. 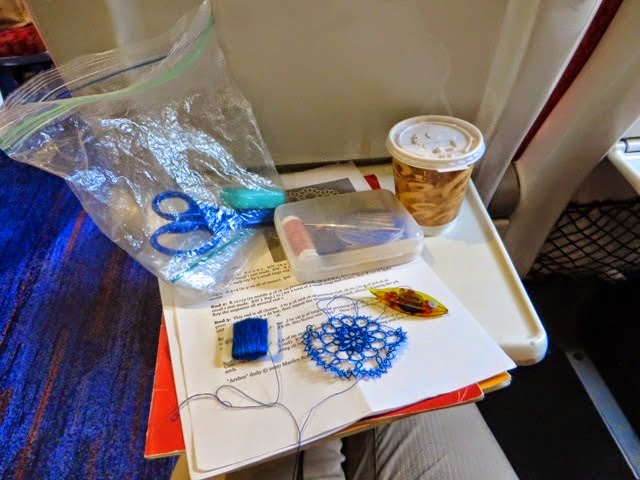 Margaret found this brooch in the market in Frome and finally got a chance to embellish it with tatting using Lizbeth size 20 Purple Splendor and that finishes a second round of 25 motifs. Now she's on to her third. She is working on the 8th round of Renulek's Summer Doily and when it's done she plans to start on the collar. 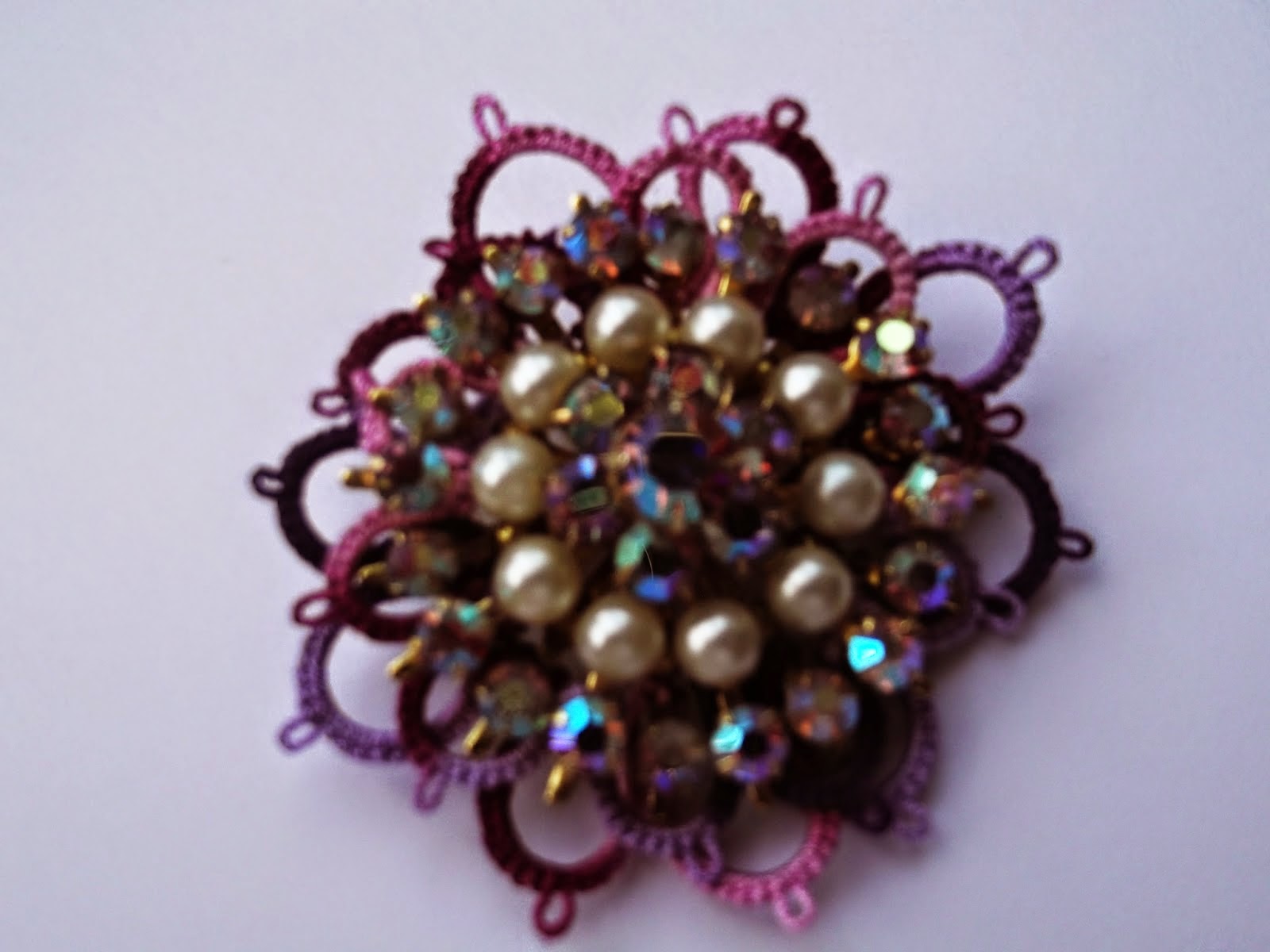 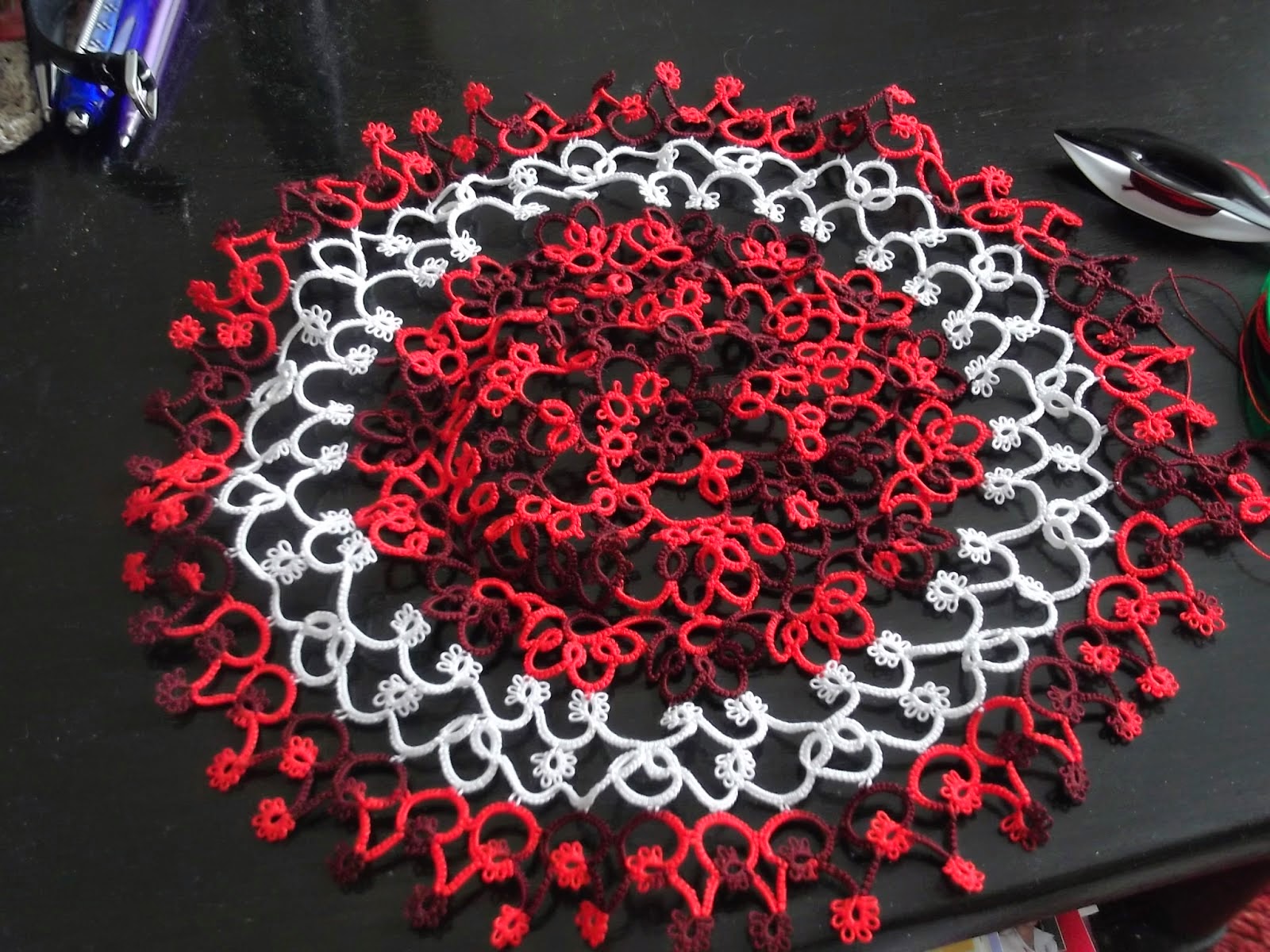 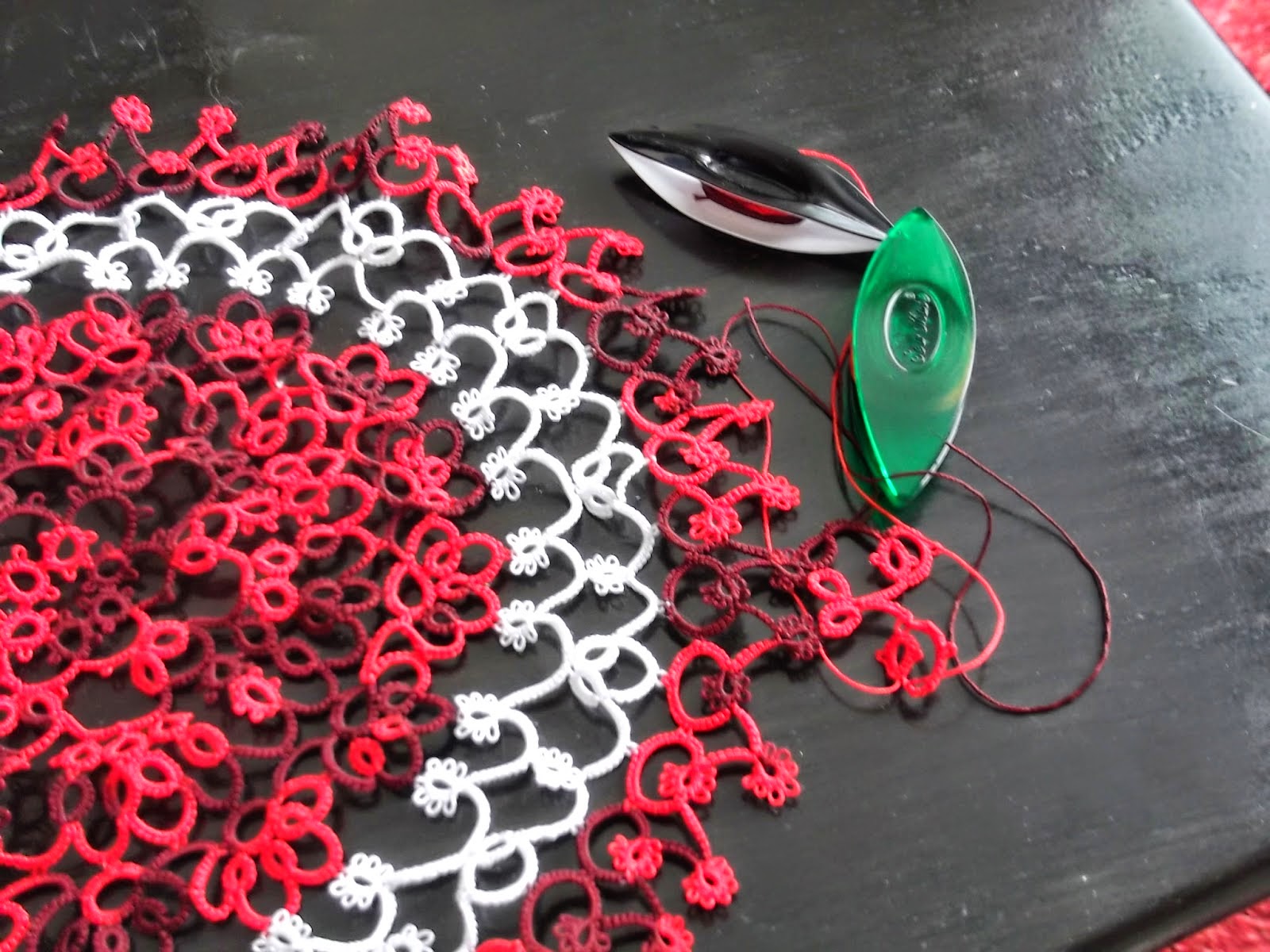 Marie created a diamond pendant to match the Pinky earrings. Her latest design, uses a mood stone (remember those?) and makes a pendent that is 1 1/4" X 2 ", tatted with two strands of metallic sewing thread. Here is the same pendant with a little "mood" change. Here's the same design with a little tweaking. 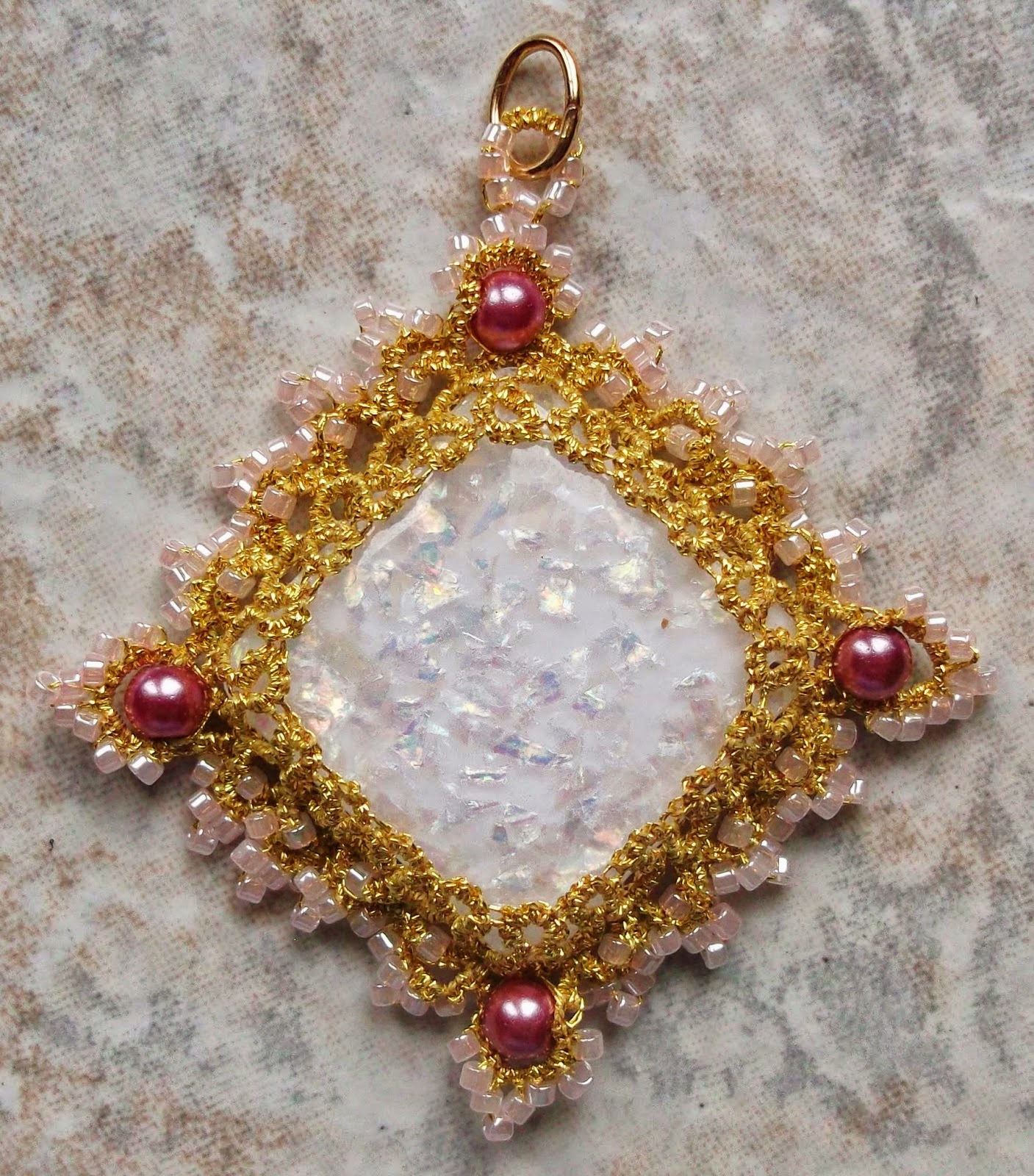 Michelle participated in a little "Art Fair" where she sold some of her tatted items. Interestingly enough the dreamcatchers weren't the big hit she thought they would be, but the note cards were. 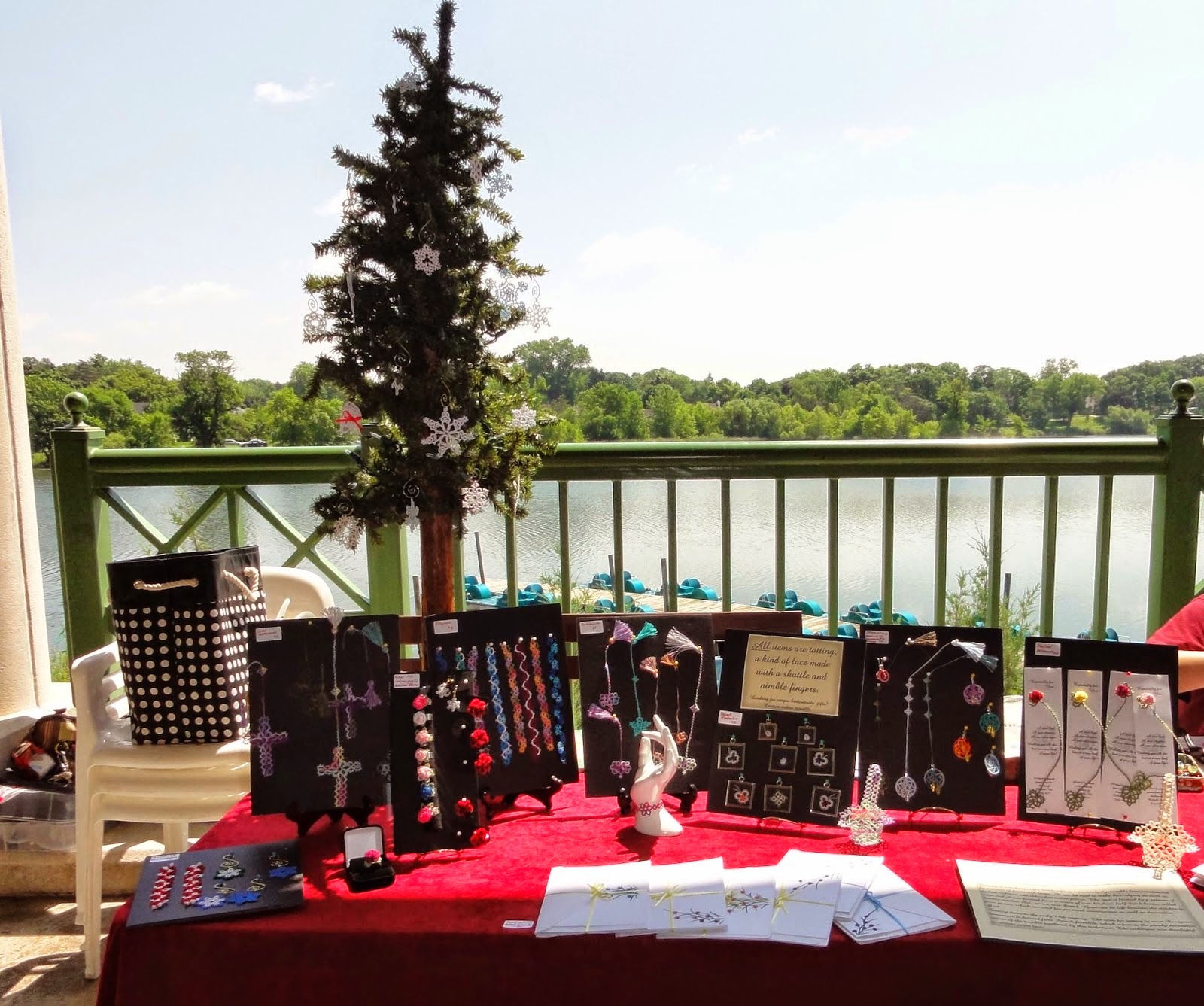 Phyllis tatted some presents. An ink pen insert using the pattern from last years Tat Days, which consists of three rows of split rings joined together to make a tube, done in her own HDT. The seahorse earrings were a request from a family member and done in HDT she found on Etsy. The pattern is also from Tat Days. 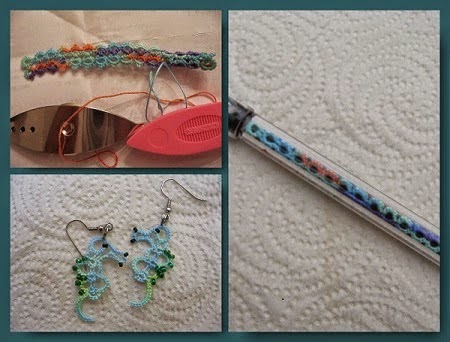 Sue did the Maria cross from Tatted Bookmarks  - cross-shaped by Lene Bjorn in size 40 Lizbeth Antique Violet Med.  A second test tat of the Butterfly Carousel from Elaine P. Gan from Test Tatters on Facebook, with a slight variation, done in size 40 Queen Anthias and variegated greens from Tat-ilicious. 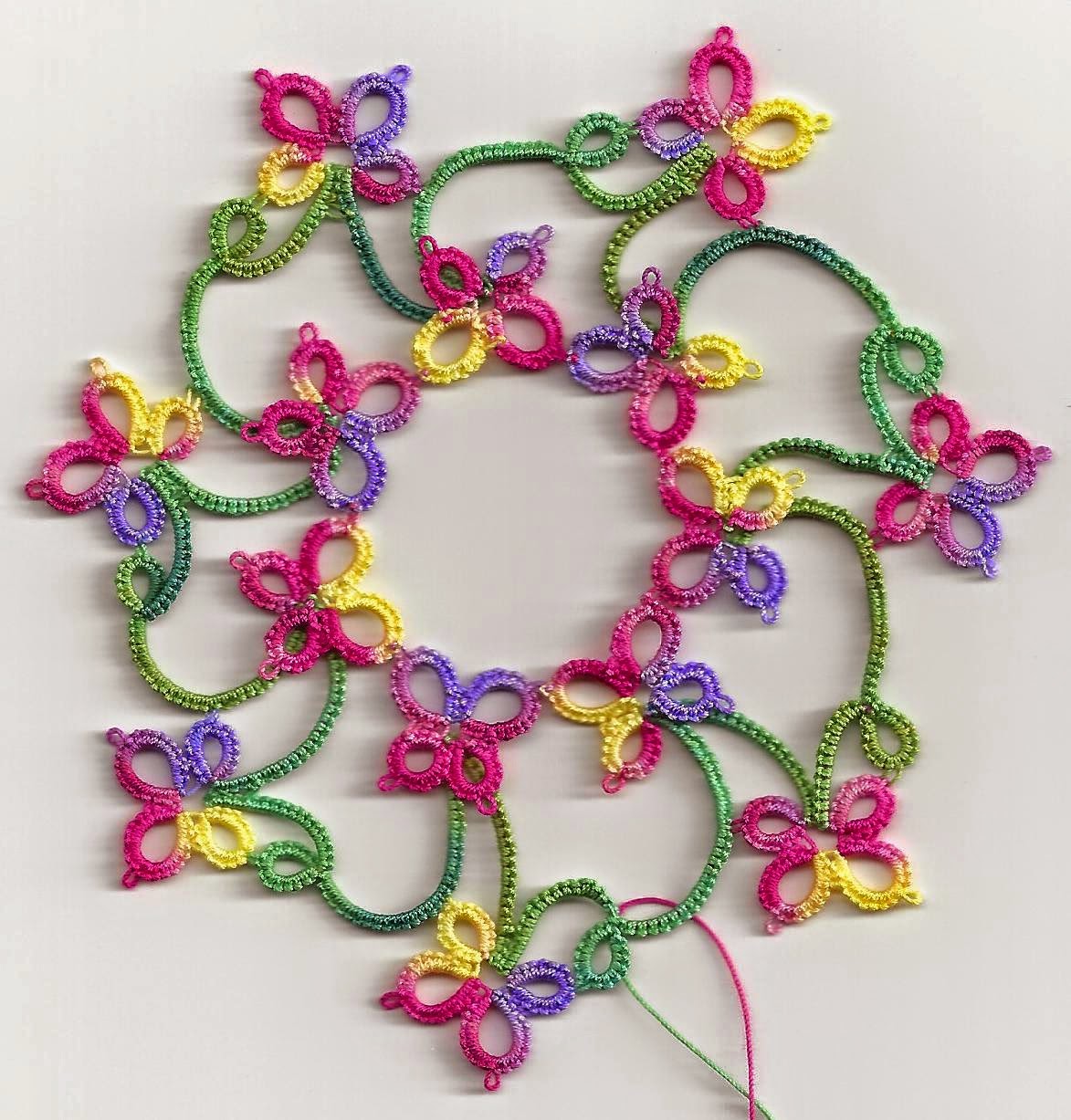 Wanda tatted Horse (Foal) from Inga Madsen's book "Tatted Animals" with Lizbeth Silver #605 and Mocha Brown Dk #692, size 20 and she plans on turning it into a scene with flowers and stuff, but she's not sure exactly what.