Muskaan was inspired by this bracelet made by UshaKota when she converted a macramé pattern into tatting. She has posted step by step instructions of her own journey in playing with directional changes. 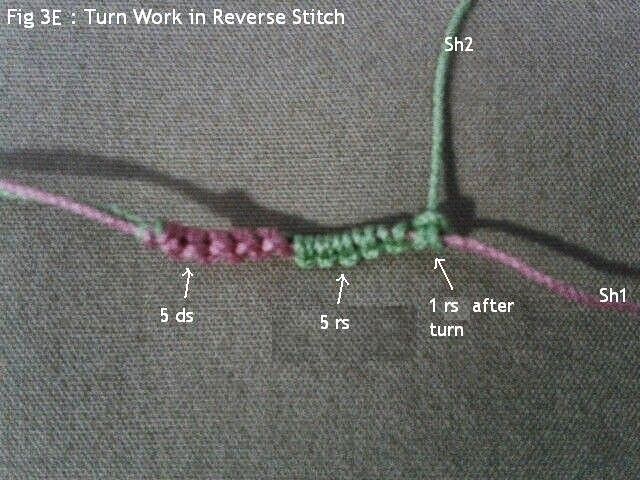 Lilas used 3 small motifs to create a unique necklace for her sister's birthday. 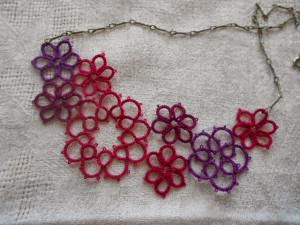 mb duke made the Dog pattern from Inge Madsen's Tatted Animals book in Lizbeth Arctic Waters in size 40 and attached it to a t-shirt. Perfect for a little boy. 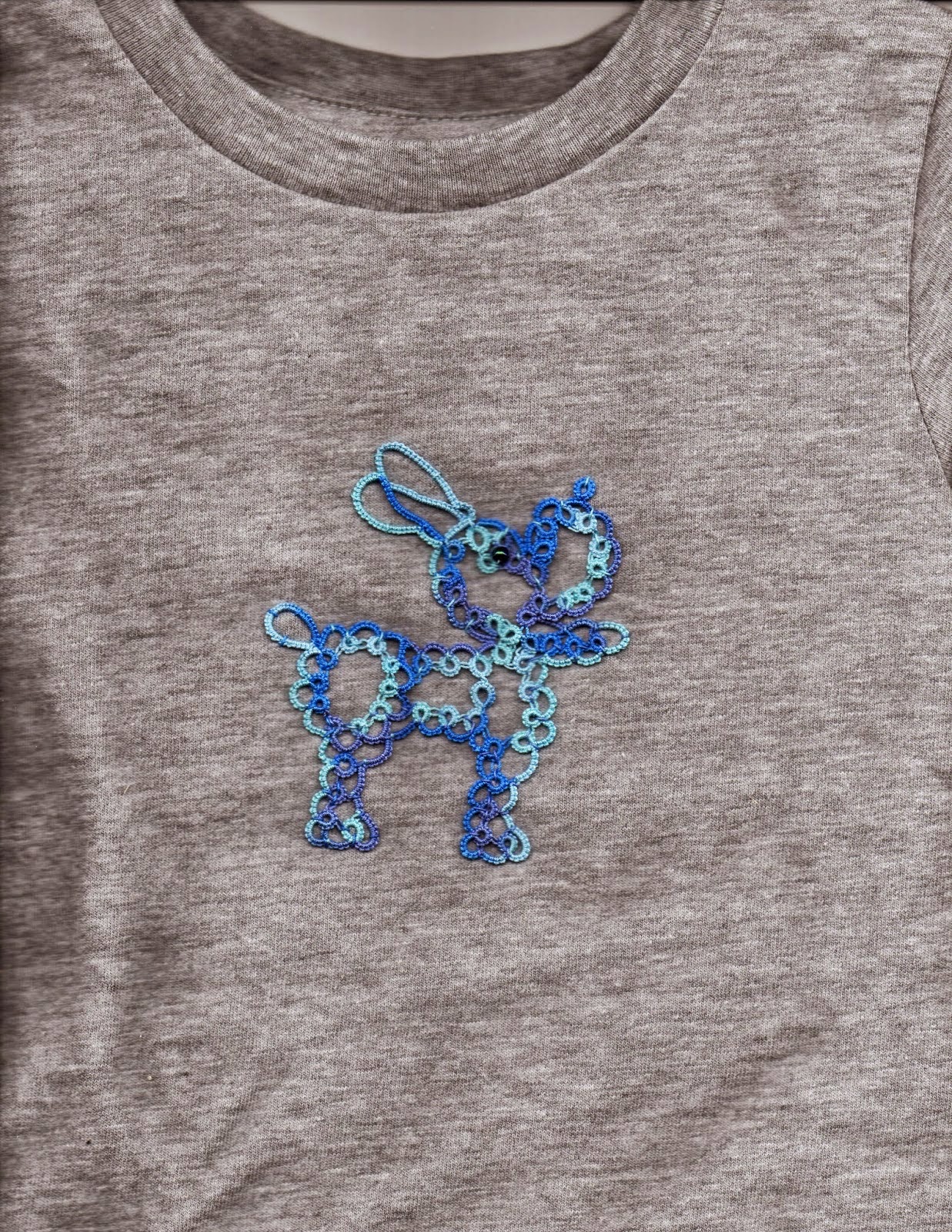 Lelia met with the Tollway tatters and was dazzled by how effortlessly Marilee tatted up this piece. Carrie whipped up one of her notecards. The doily is, of course, Diane's in progress, Letnia. Sue Anna amazed everyone with her shuttle collection. Lelia worked on the Split Ring Heart by Georgia Seitz, but having a bandaid on a damaged finger meant a lot of unsightly gaps, so she started it again. 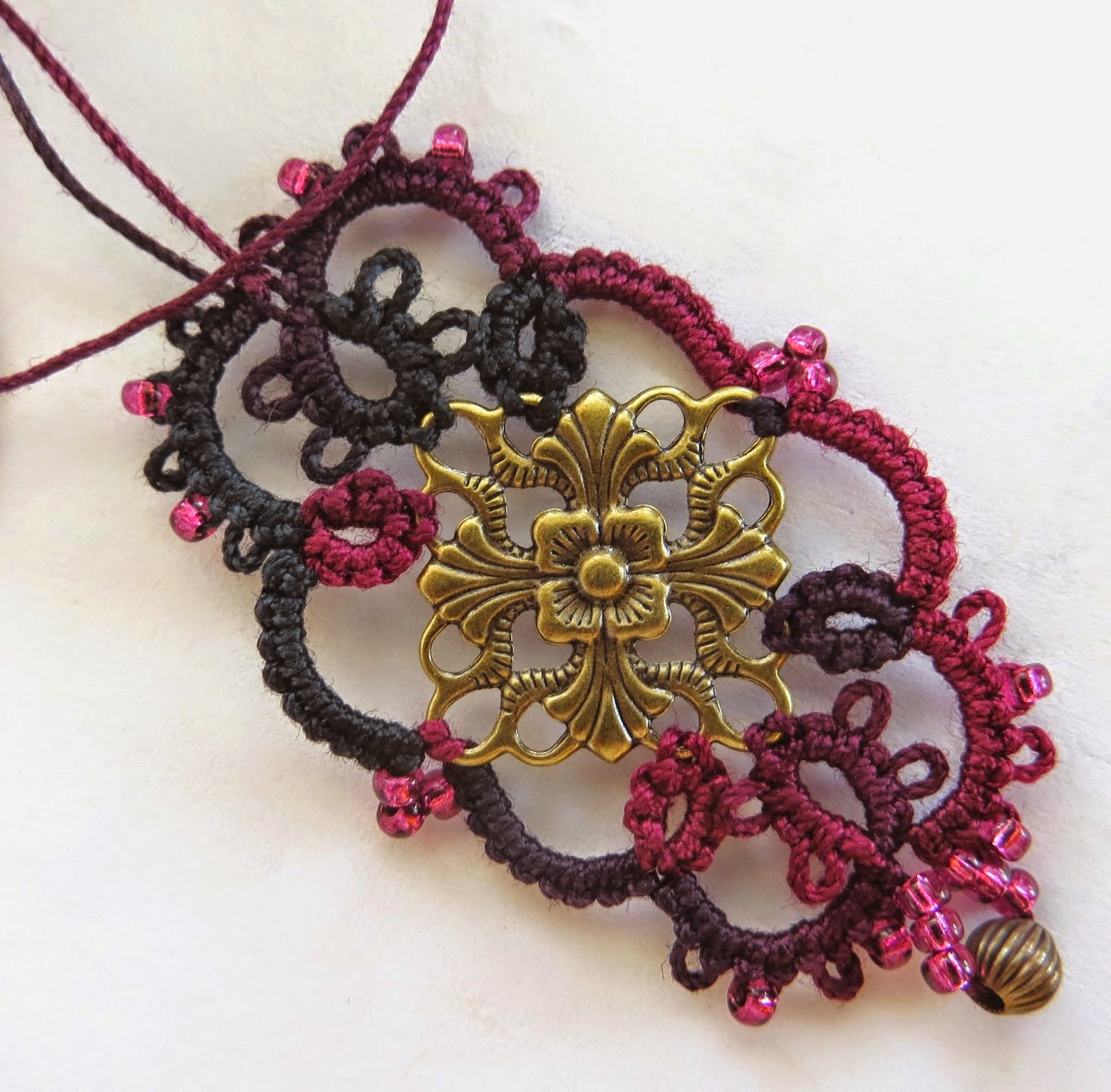 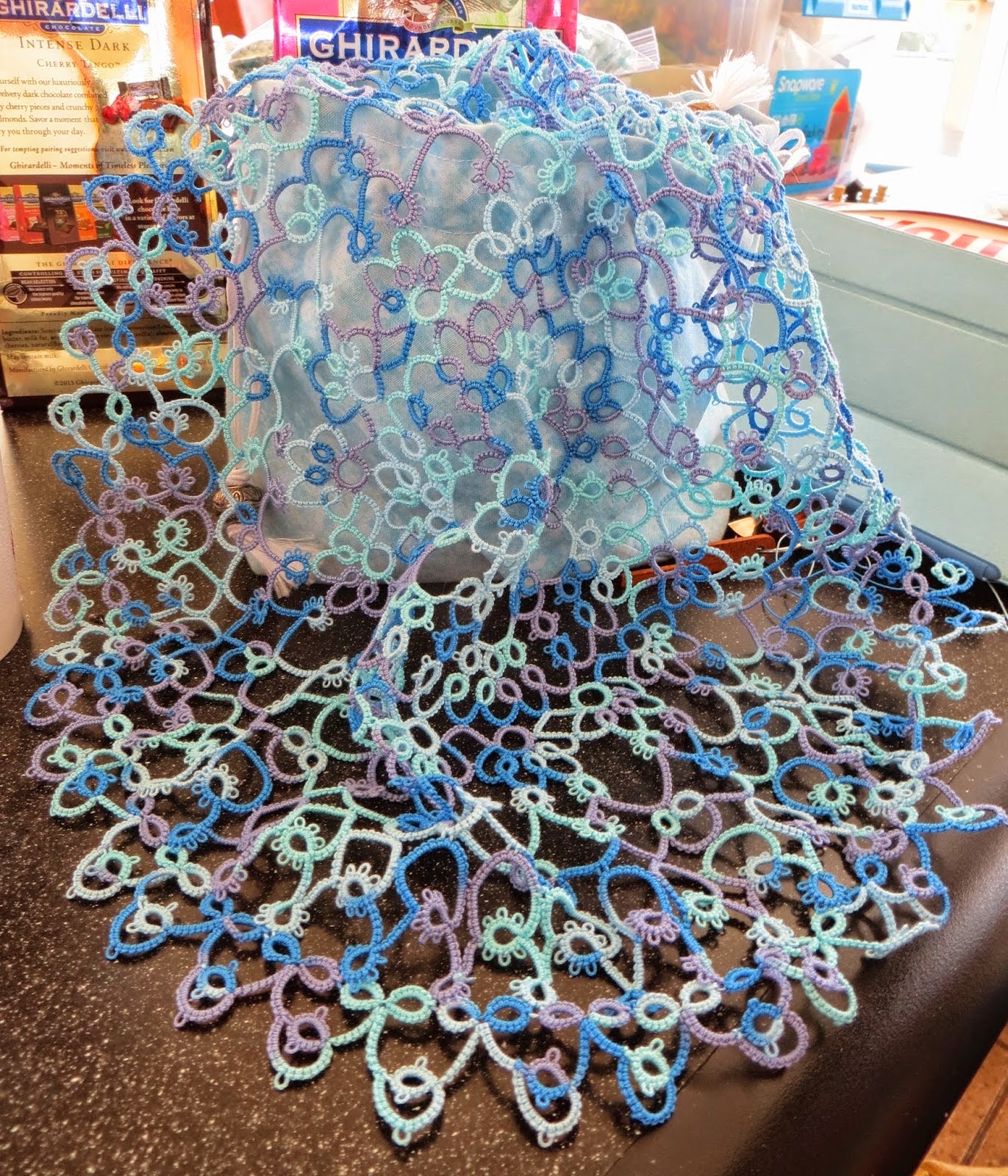 Ginny has the Spring Doily finally done and used a bazillion pins to block it out. Now she's looking forward to tatting the Summer Doily. 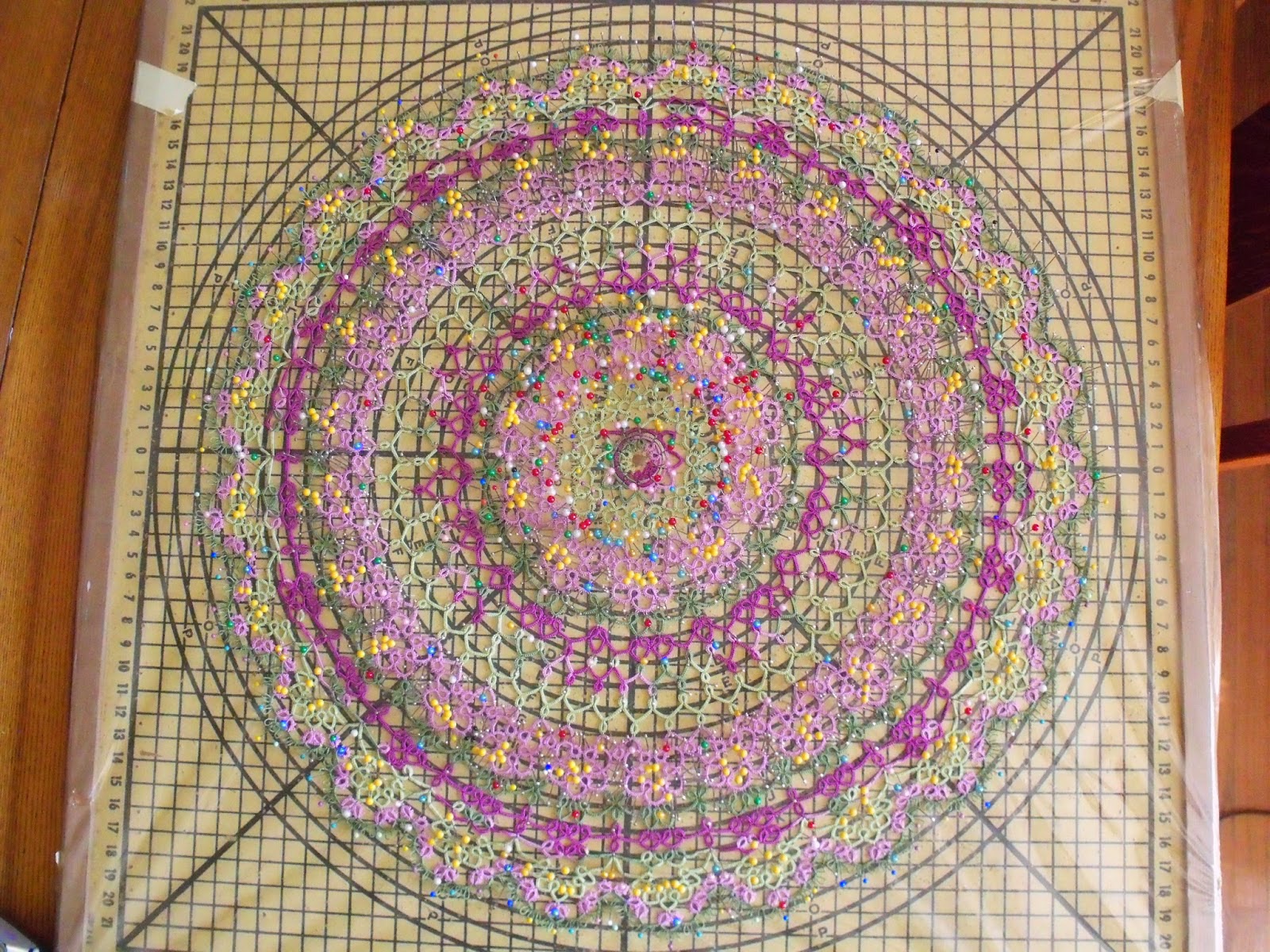 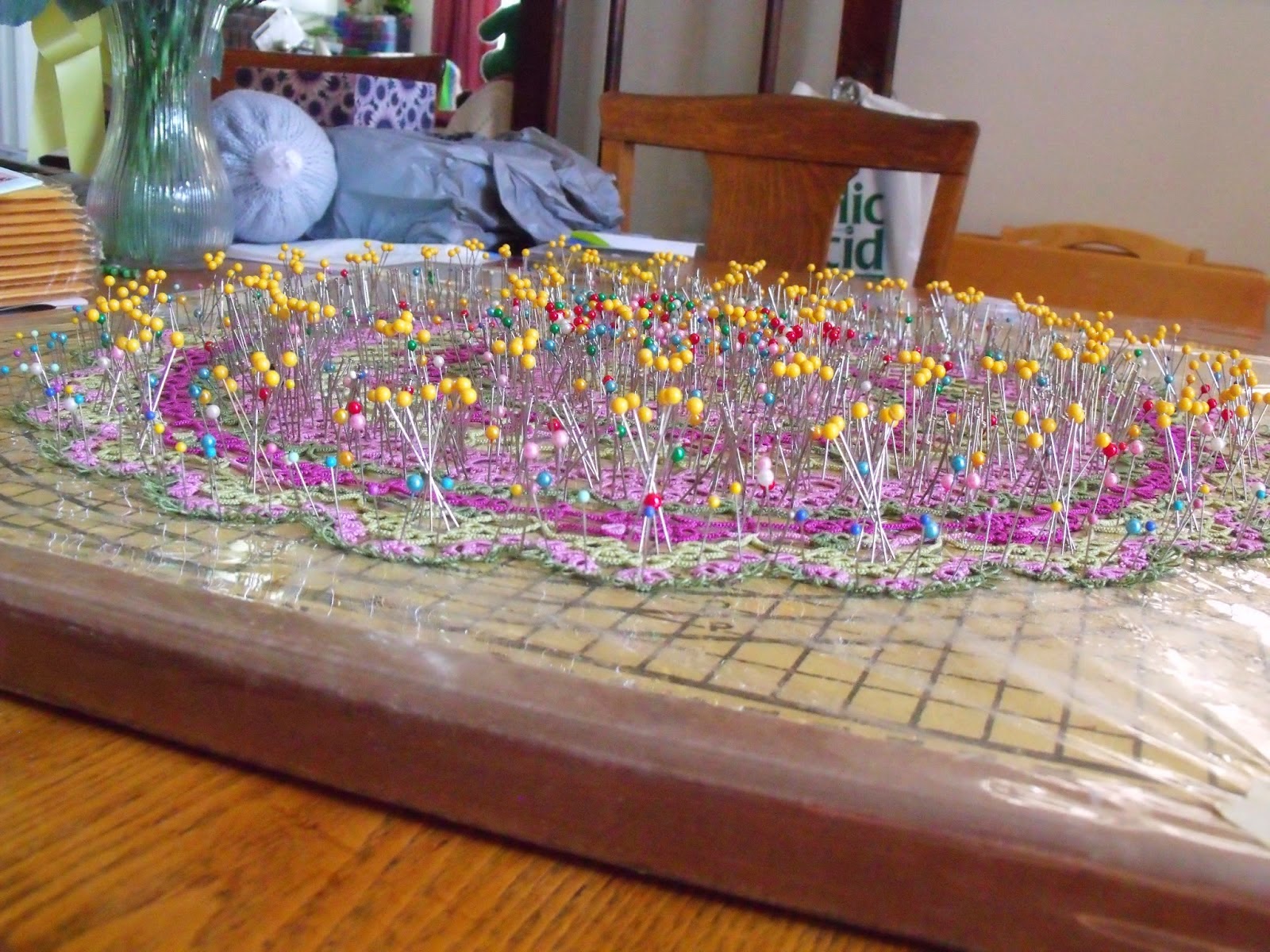 Diane's students were privileged to meet up with Marilee and Sue Anna for tatting time on the front porch. Diane is almost halfway finished with round 8 of Renulek's Letnia. She also worked some more on her hanky edging in Lizbeth Twirlz. She likes the thread and the pattern, just maybe not together. 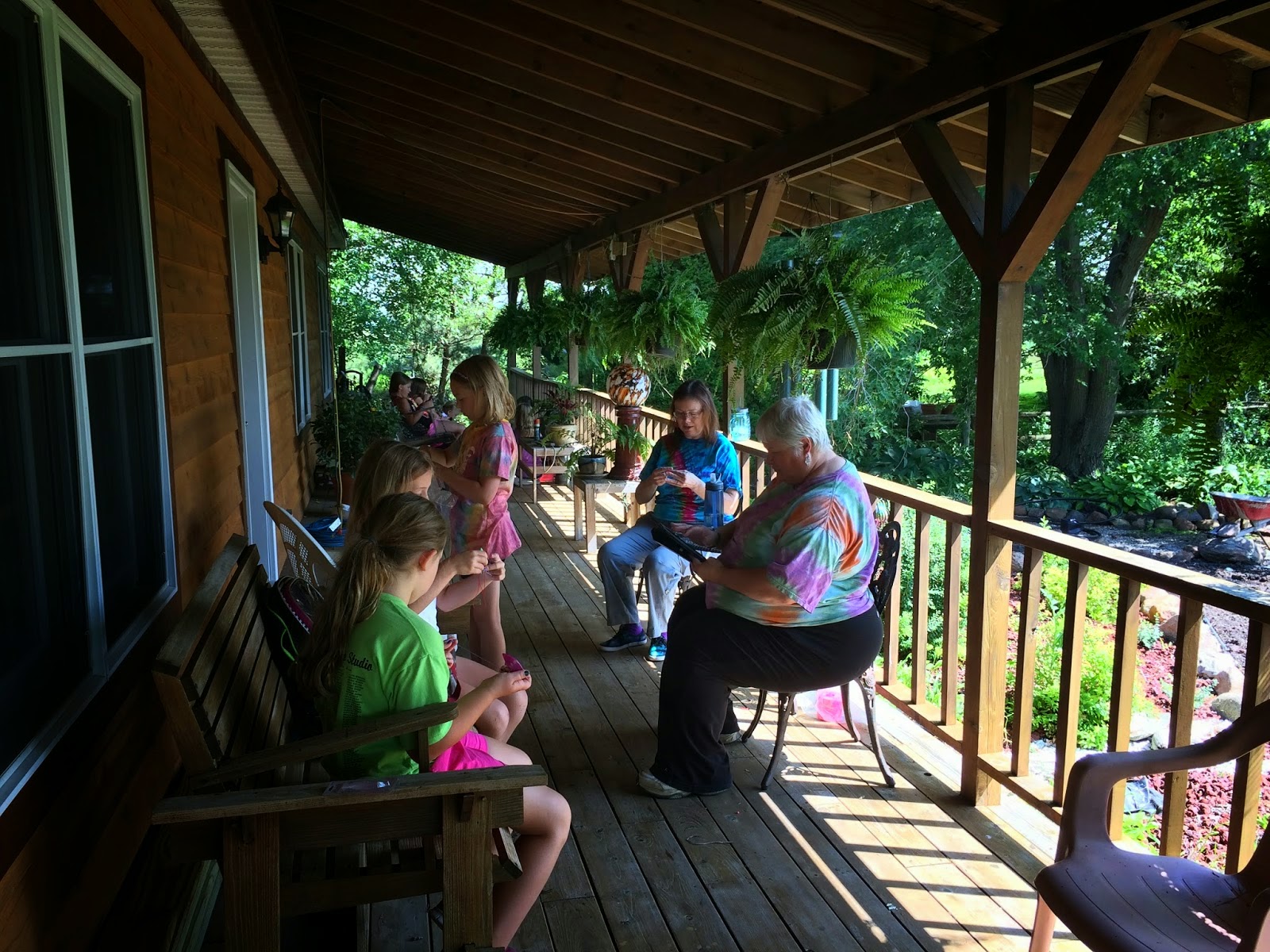 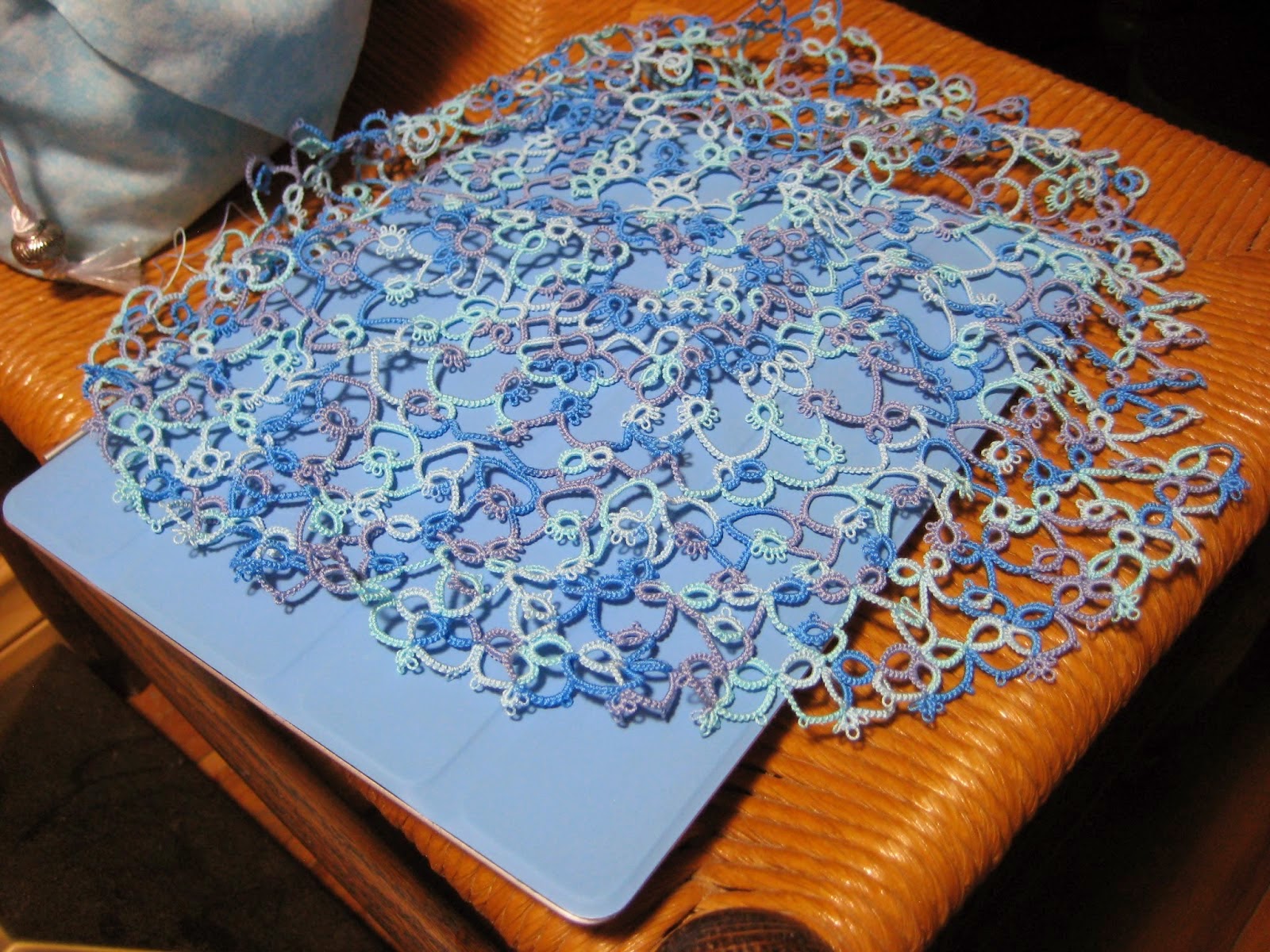 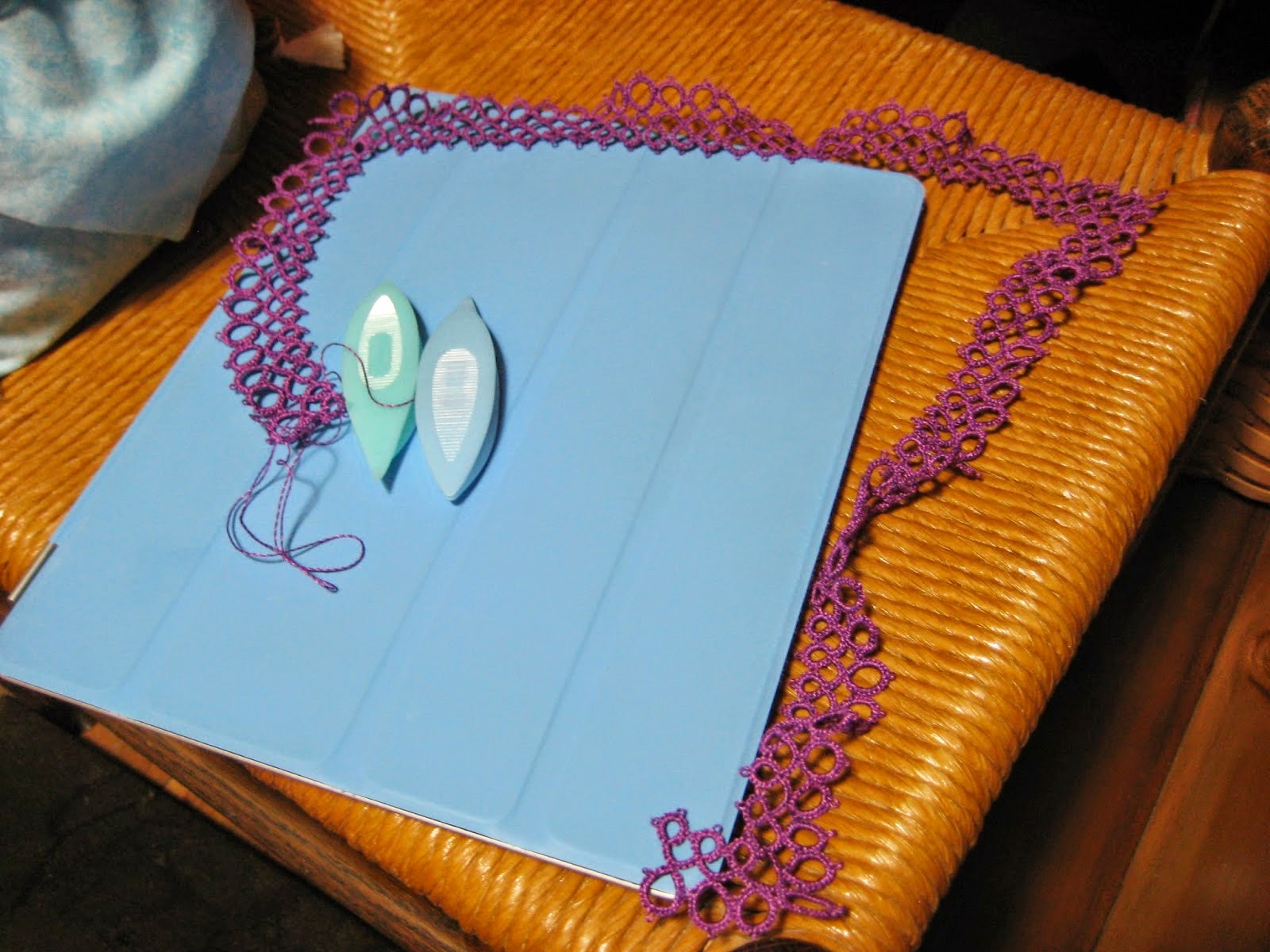 Fox has round 3 of the collar done. This pattern designed by Karey Solomon from her
Doily Delights book was tatted in Anchor Mercer #40 and Karey Solomon’s HDT #40 thread. She changes out the motif that graces her car several times a year and she choose this recently completed one for this change. 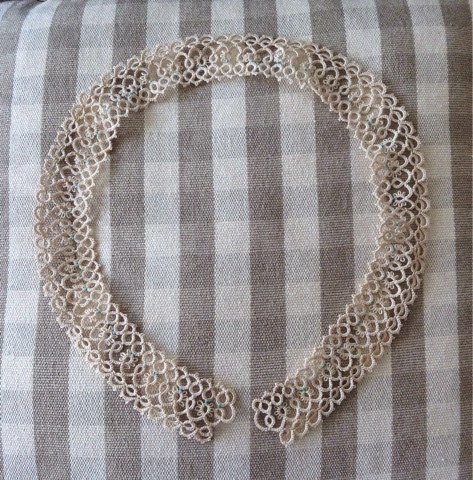 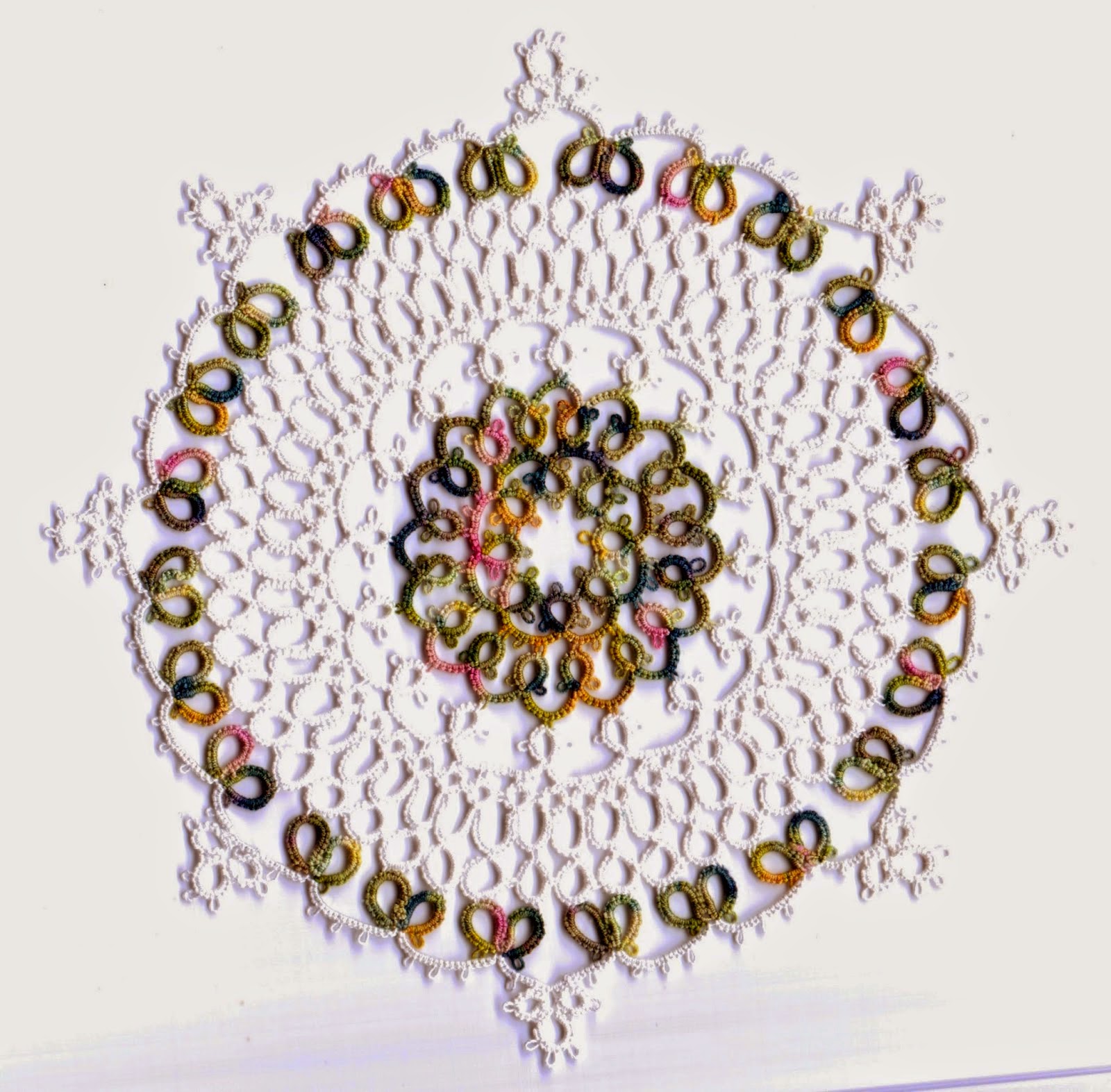 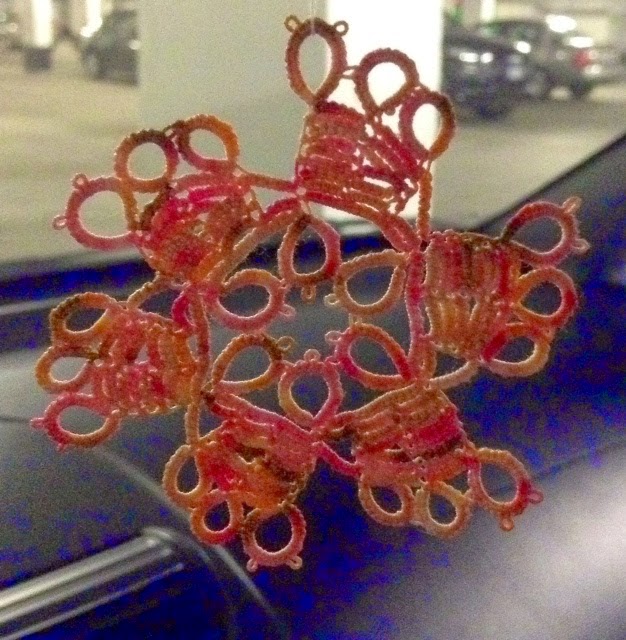 Margaret added her 3D pattern for a Lacy Orchid Pendant to her Etsy shop. 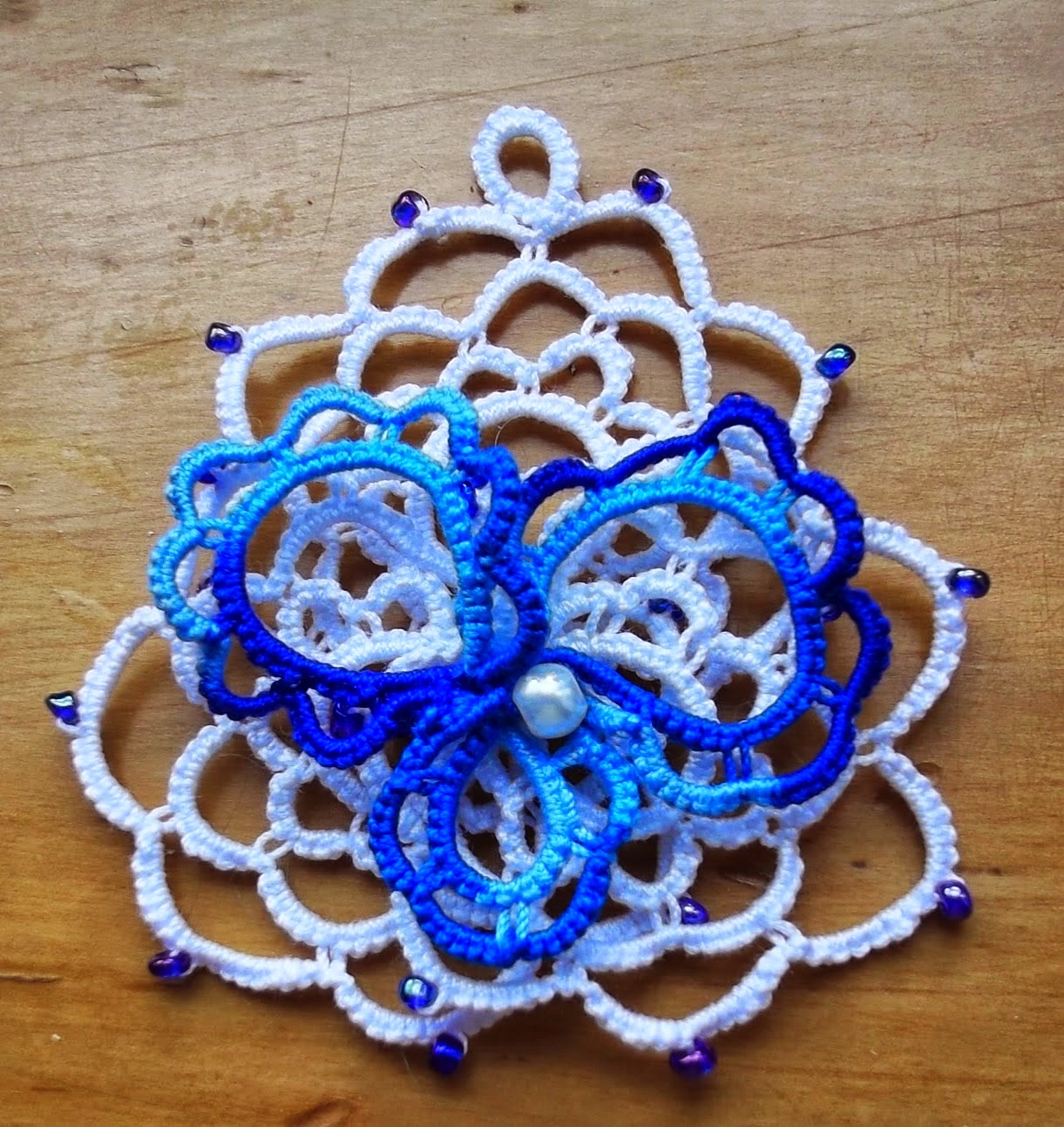 Marie used two strands of Coats and Clark sewing thread, pink and rose colored beads and gold-filled earwires to make these Pinky Earrings. An exchange brought her lots of tatting goodies including a scissors fob from a pattern by Jon in her book, Tatting with Rings. 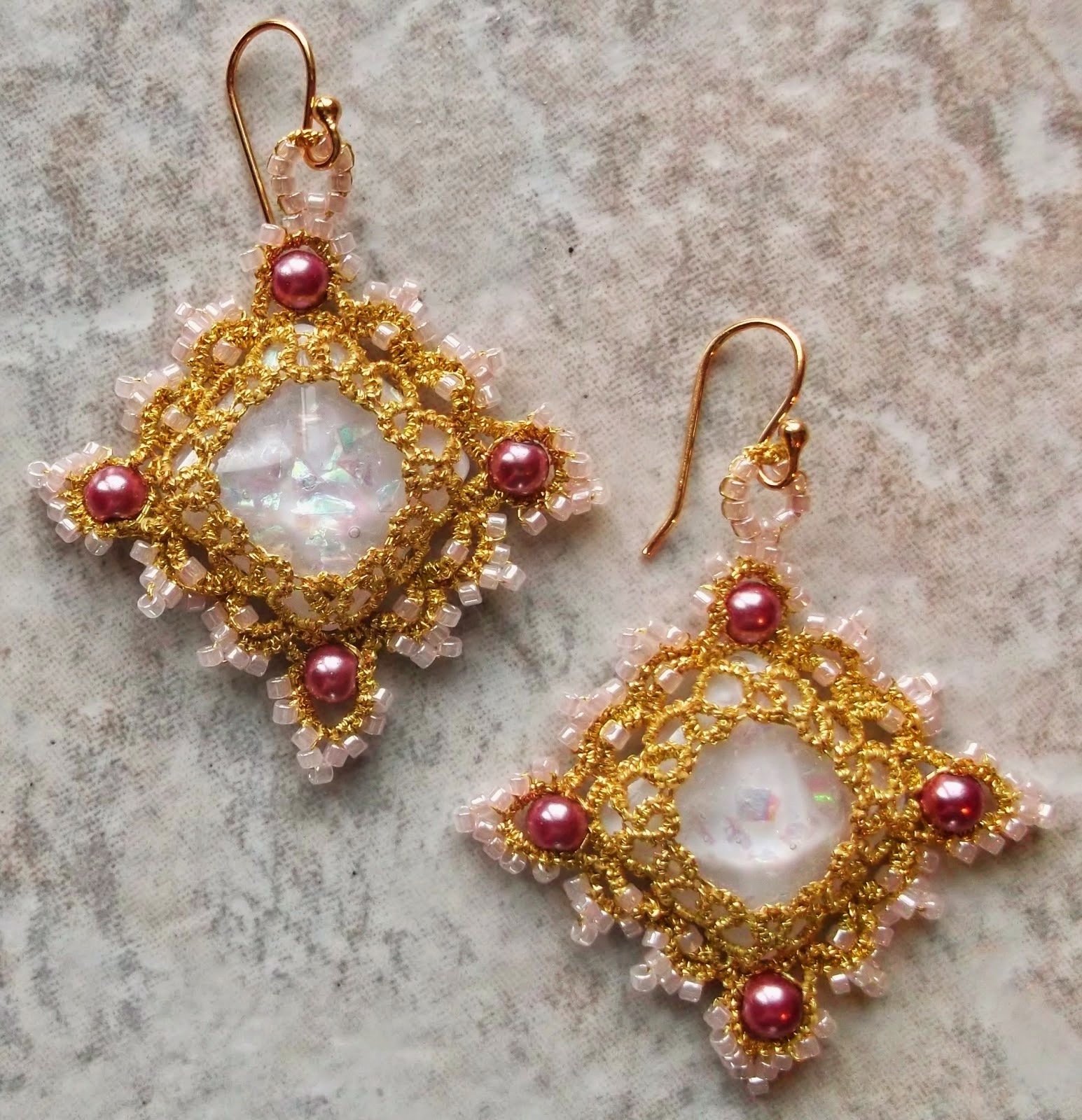 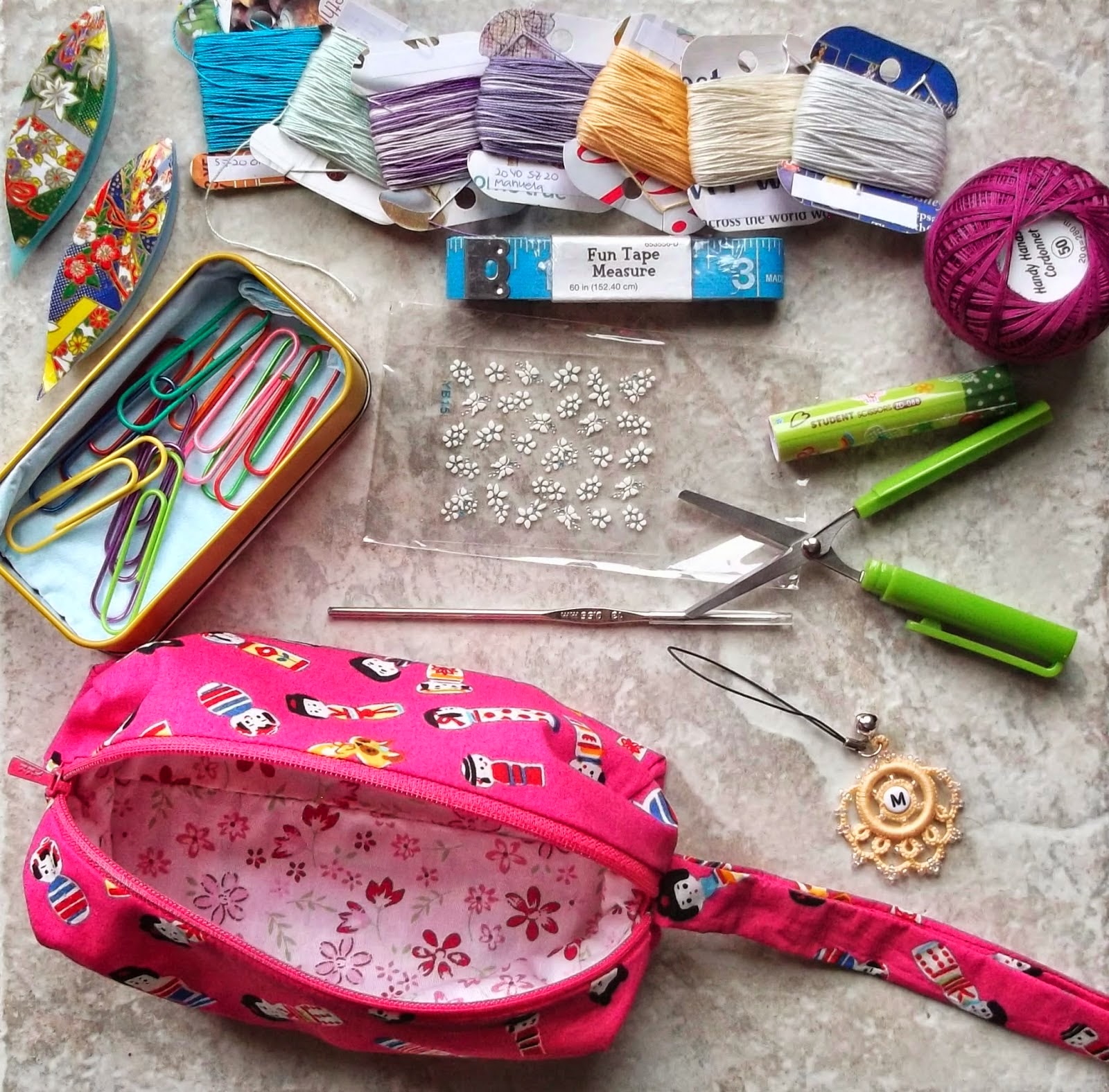 Michelle made a dreamcatcher pendant for her daughter, who really wanted a bookmark so with the addition of a tassel, the pendant done in Blue ice, size 20, was converted to a bookmark. The bookmark was so well received that she did some more in Herbal Garden, Blue Ice, Blue River Glades all size 20. She thought the feather charm was too big for the dreamcatcher earrings and Fox suggested using beads instead. Worked in vintage size 80 thread, it looks like a winner to me! Grape Splash and Sea Green DK were used for these pendant size dreamcatchers. 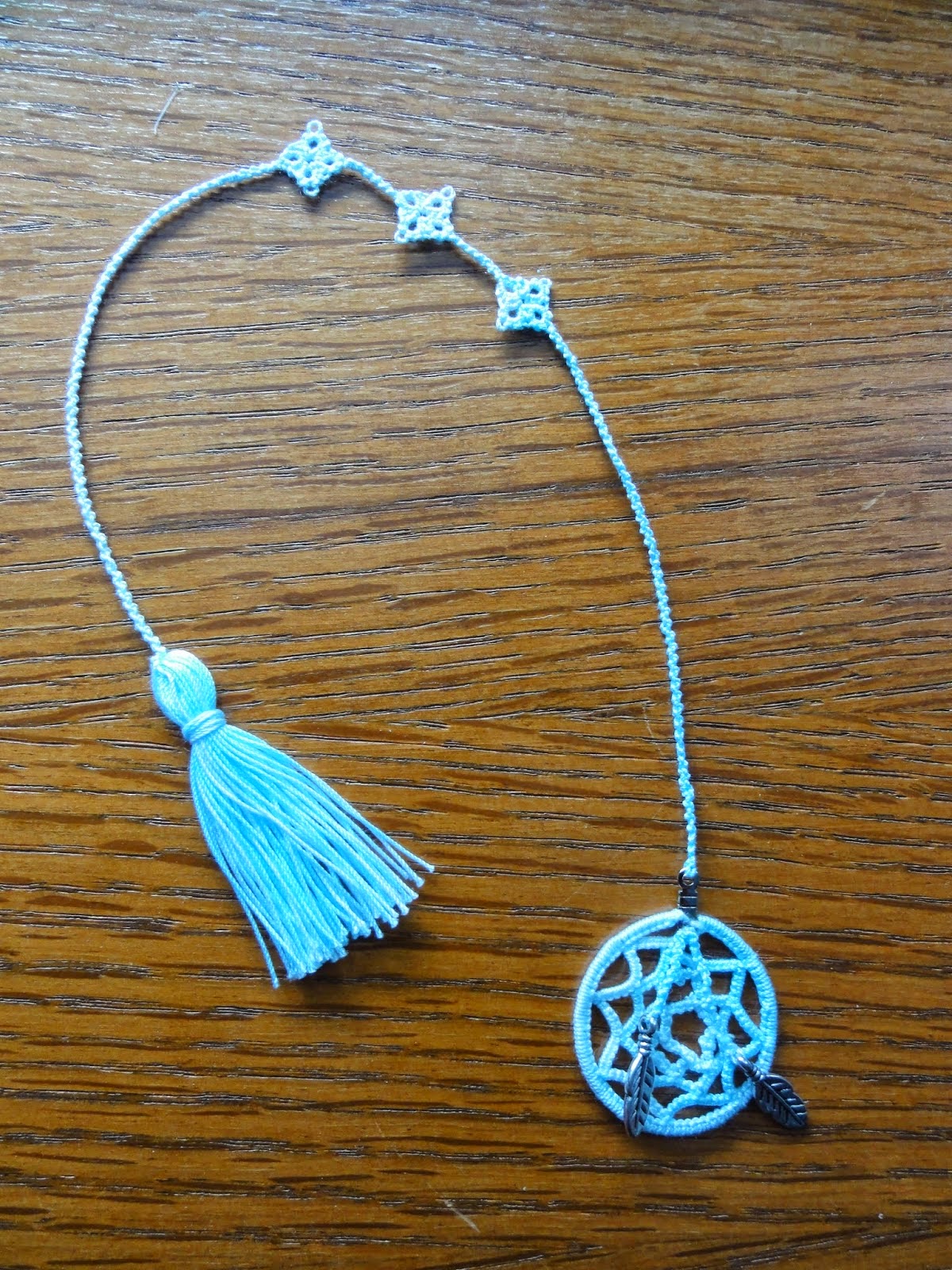 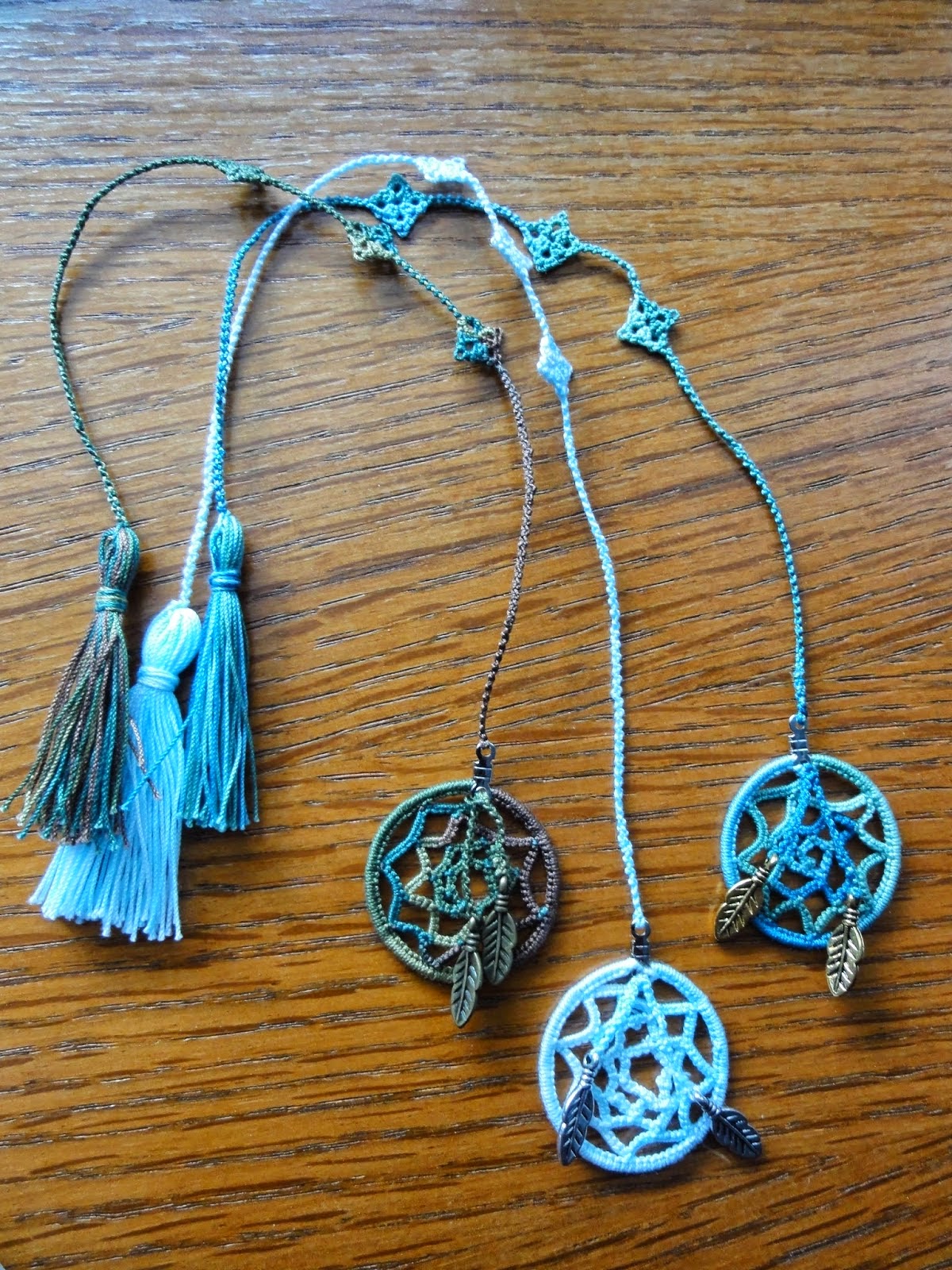 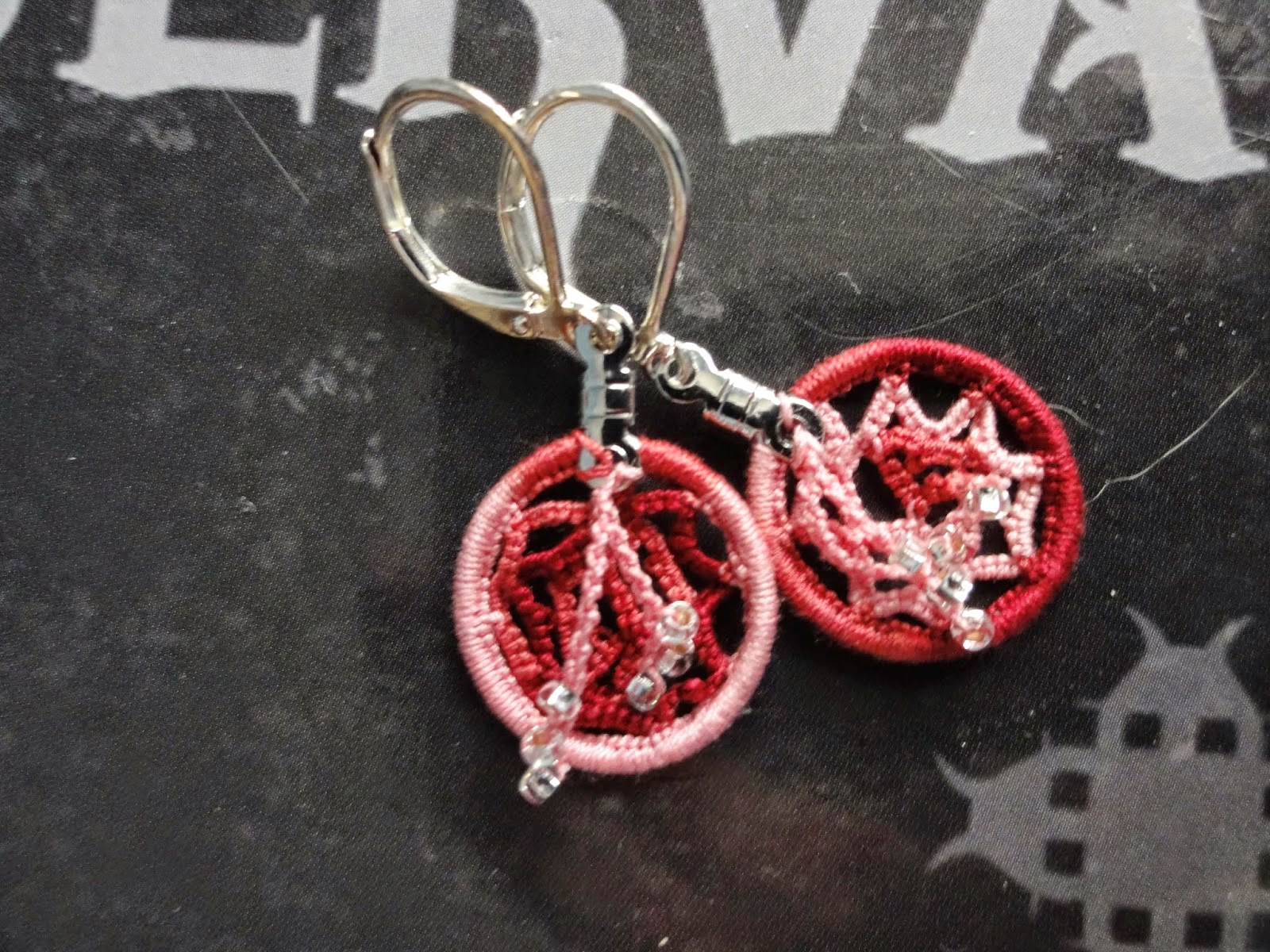 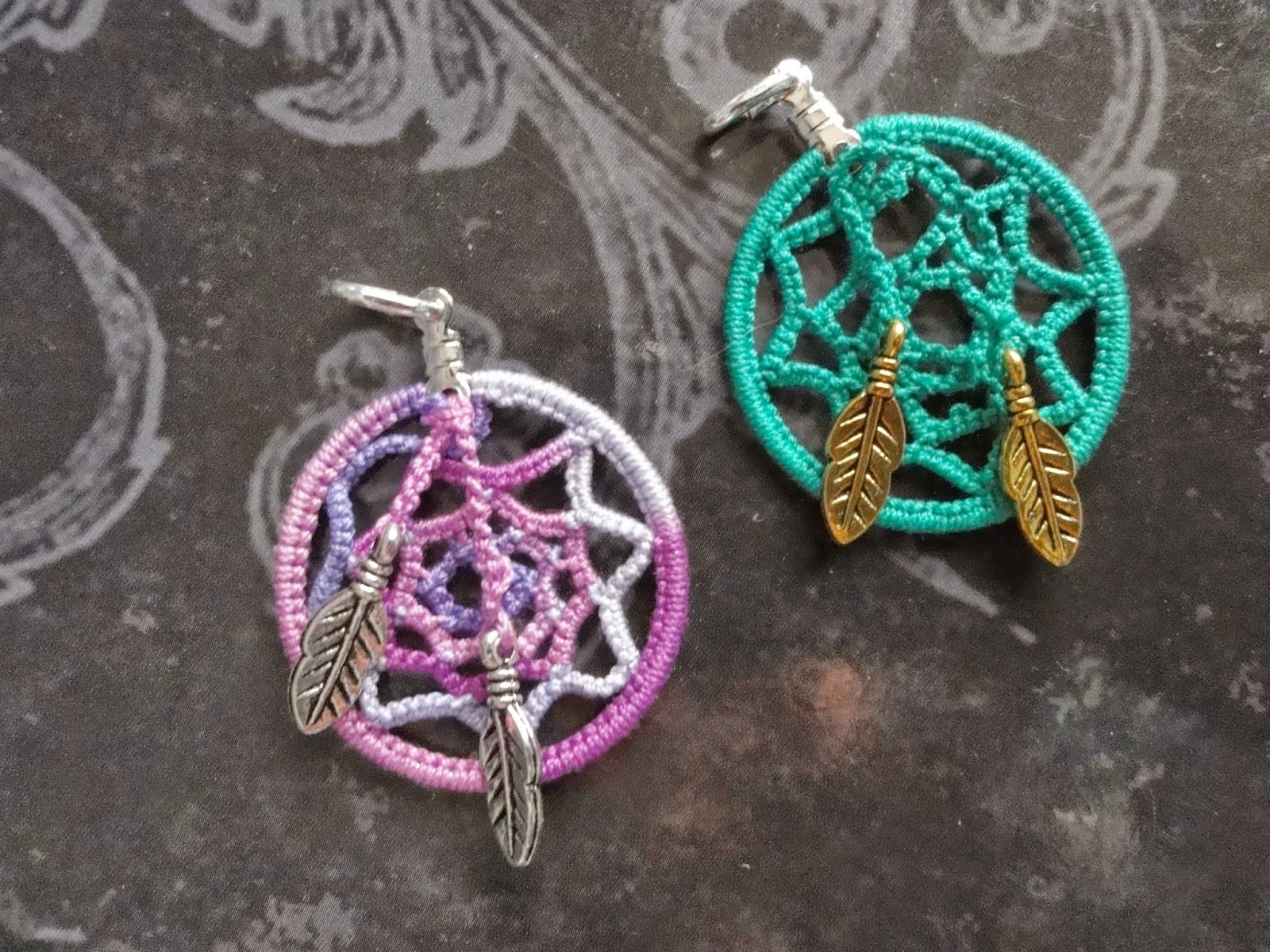 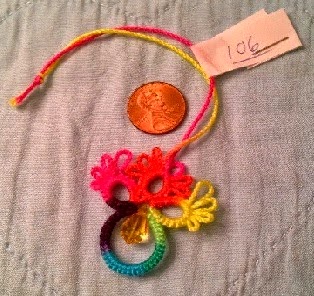 Wanda has completed all of the triangles which was very tedious as each round motif was completed and joined to the triangle with bare thread which resulted in a very pretty effect but torturous to make as each one had to be worked carefully without pulling the triangles out of shape. The triangles have been joined by a row of split rings in white and now she has to decide if she should add something to the centre and, if so, in white or red? And then what about adding to the outside? 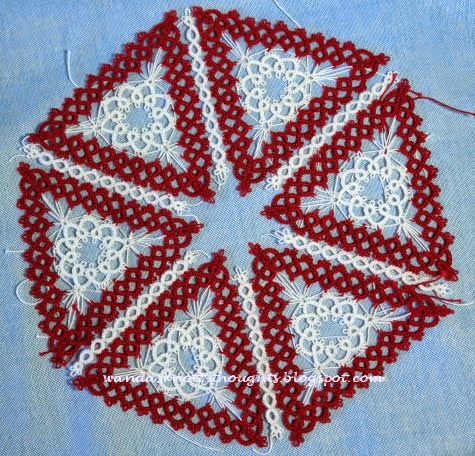