Jenn has chosen to tat several of Frivole's leaf patterns beginning with the Trio de Trèfles. Then she did the leaf pattern titled La Feuille Frivole. This was followed by the Dahlia Motif from the New Tatting book by Tomoko Morimoto. The Heart's Desire pattern by Susan K. Fuller has been on her "To Tat List" since she saw it shared on Facebook.

Lilas created a delicate necklace that reminds her of mint tea. It's paired with matching earrings.

Sue tatted another of Sally Kerston's Easter Egg patterns and used it as a very handy and efficient place to hang her specs. 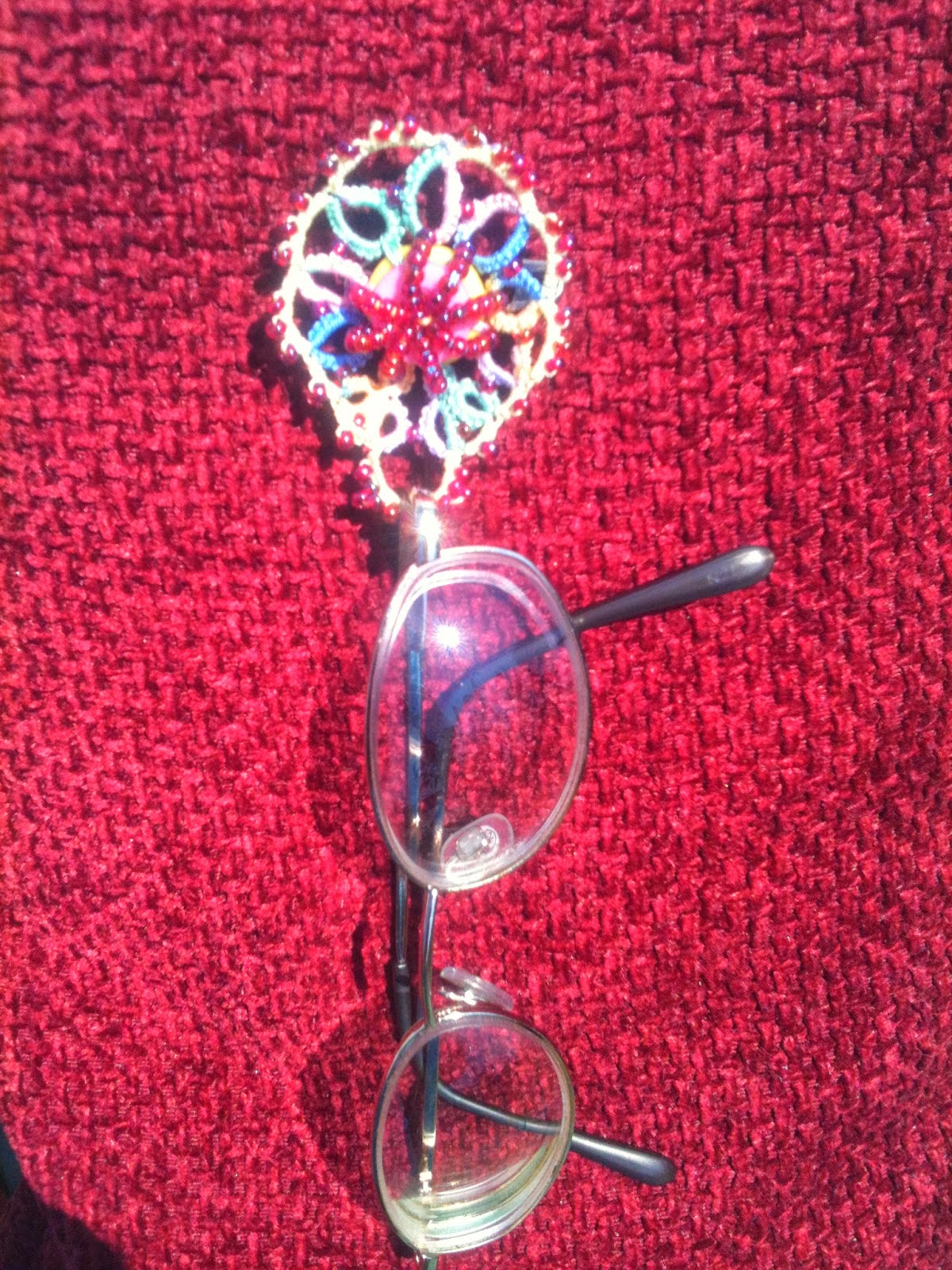 mb duke was on vacation and discovered some tatting treasures. These charming hankies were found in an antique store n Mishawaka. 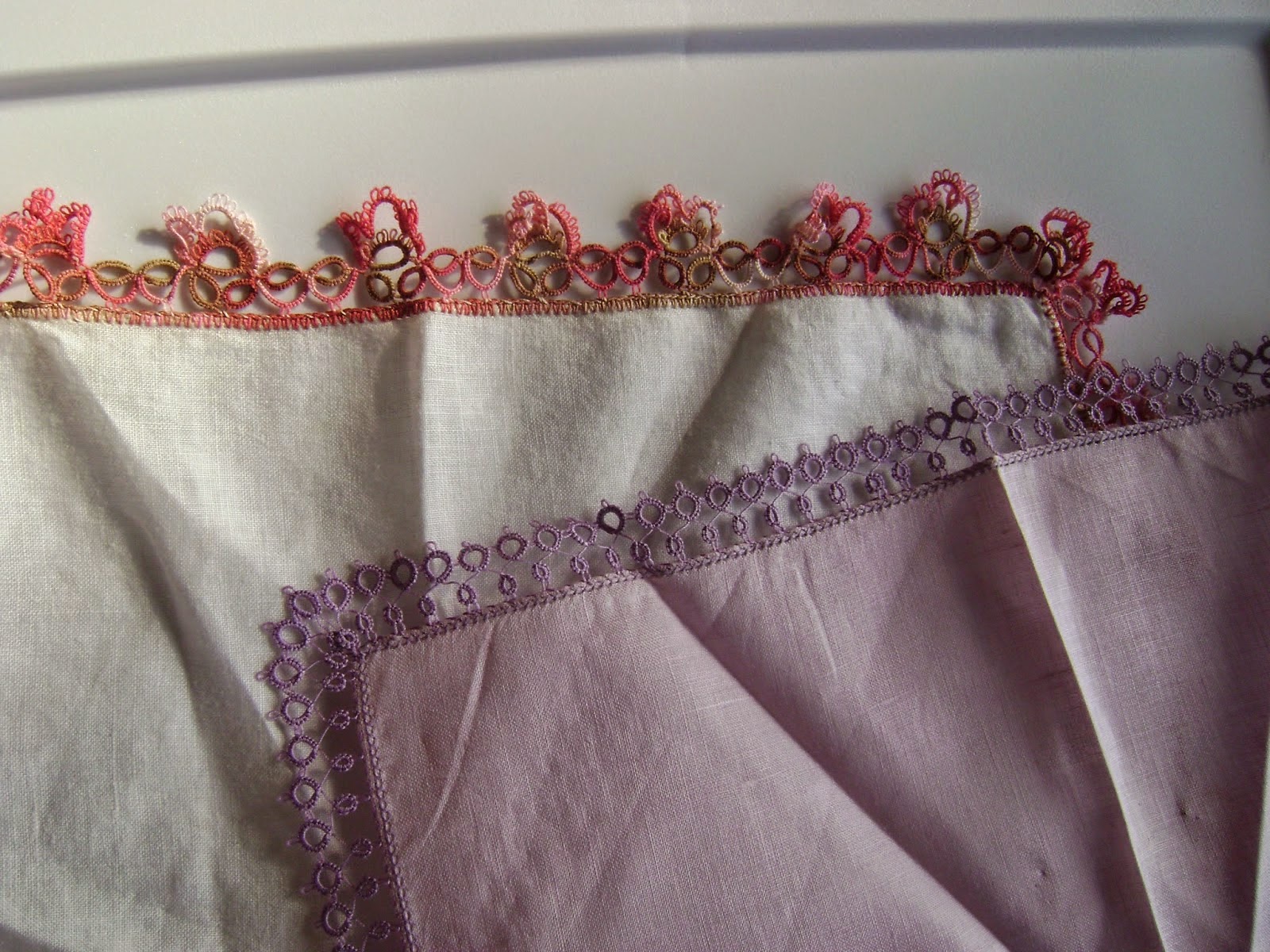 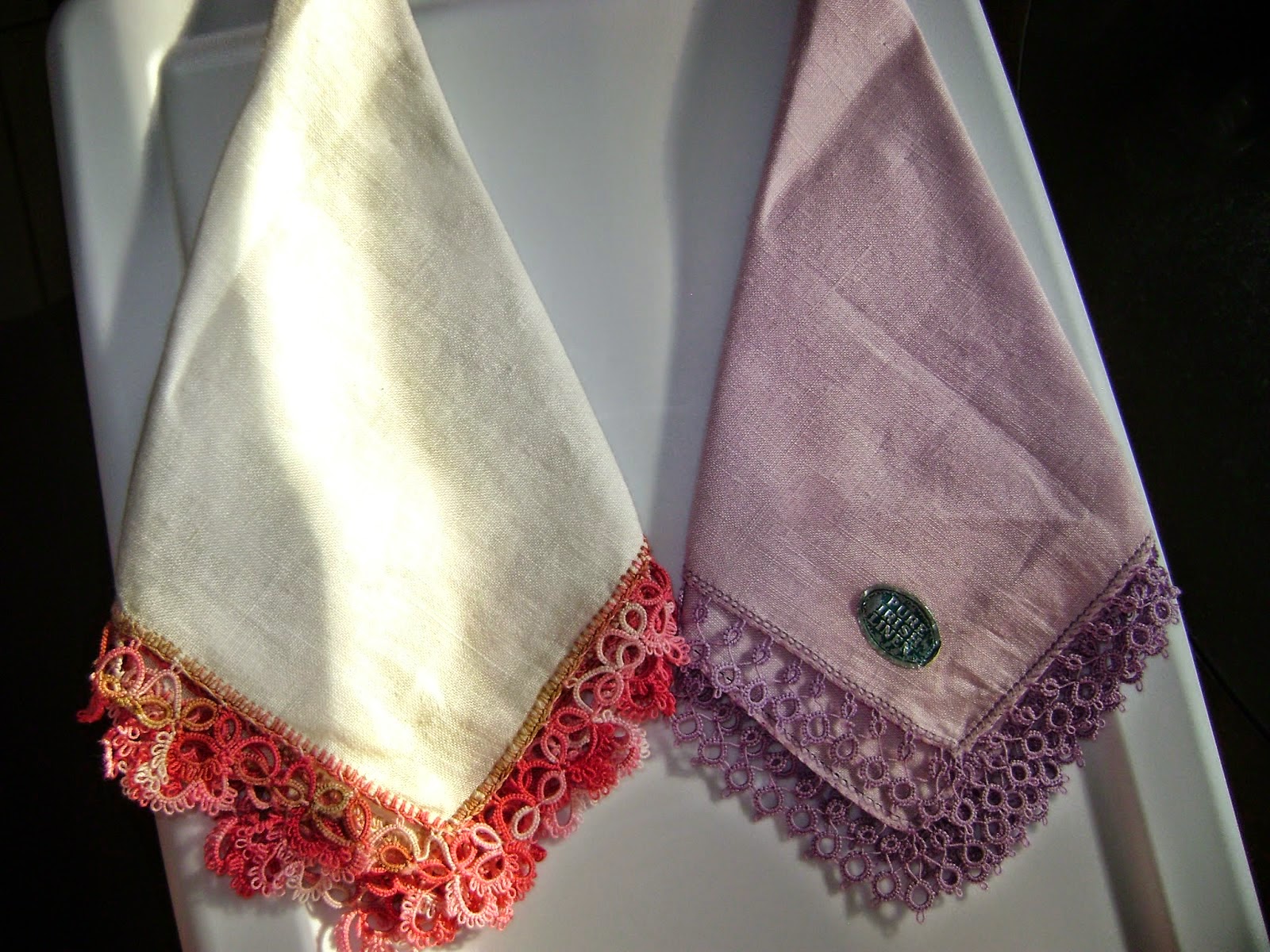 Diane decided that Letnia was too pretty to give away and so it's residing on the hutch in the dining room. Her little tatting buddies stopped by to do some tatting. Diane was looking for some instant gratification and tatted this motif from Tatting by Myra Piper. The next one she tatted didn't look quite right. Here it is with the same pattern she did earlier and it's definitely different. She did it again still working with size 20 Lizbeth, Arctic Waters. That looks more like it! Here's another 7 sided motif from the book mislabelled as a snowflake. 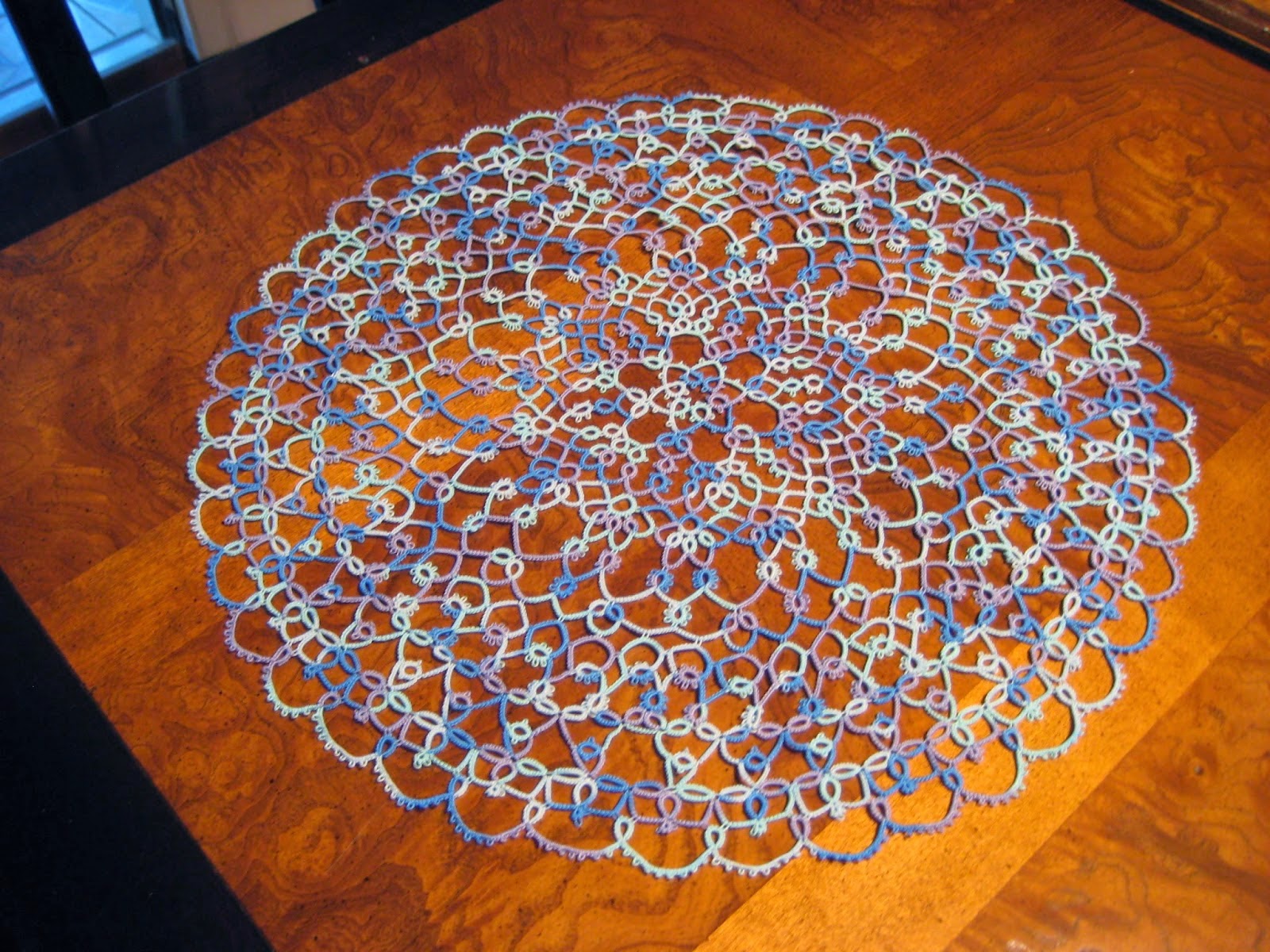 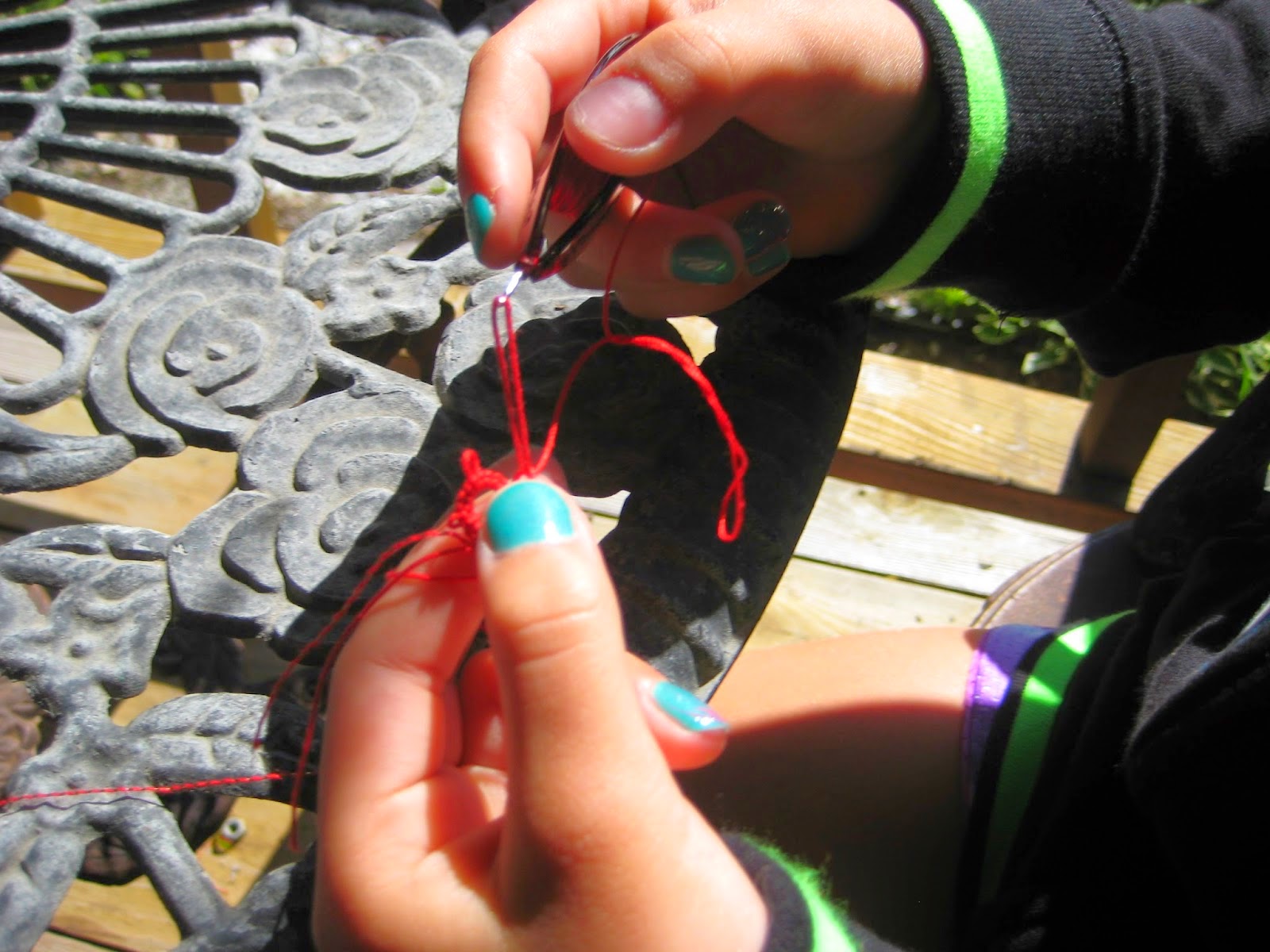 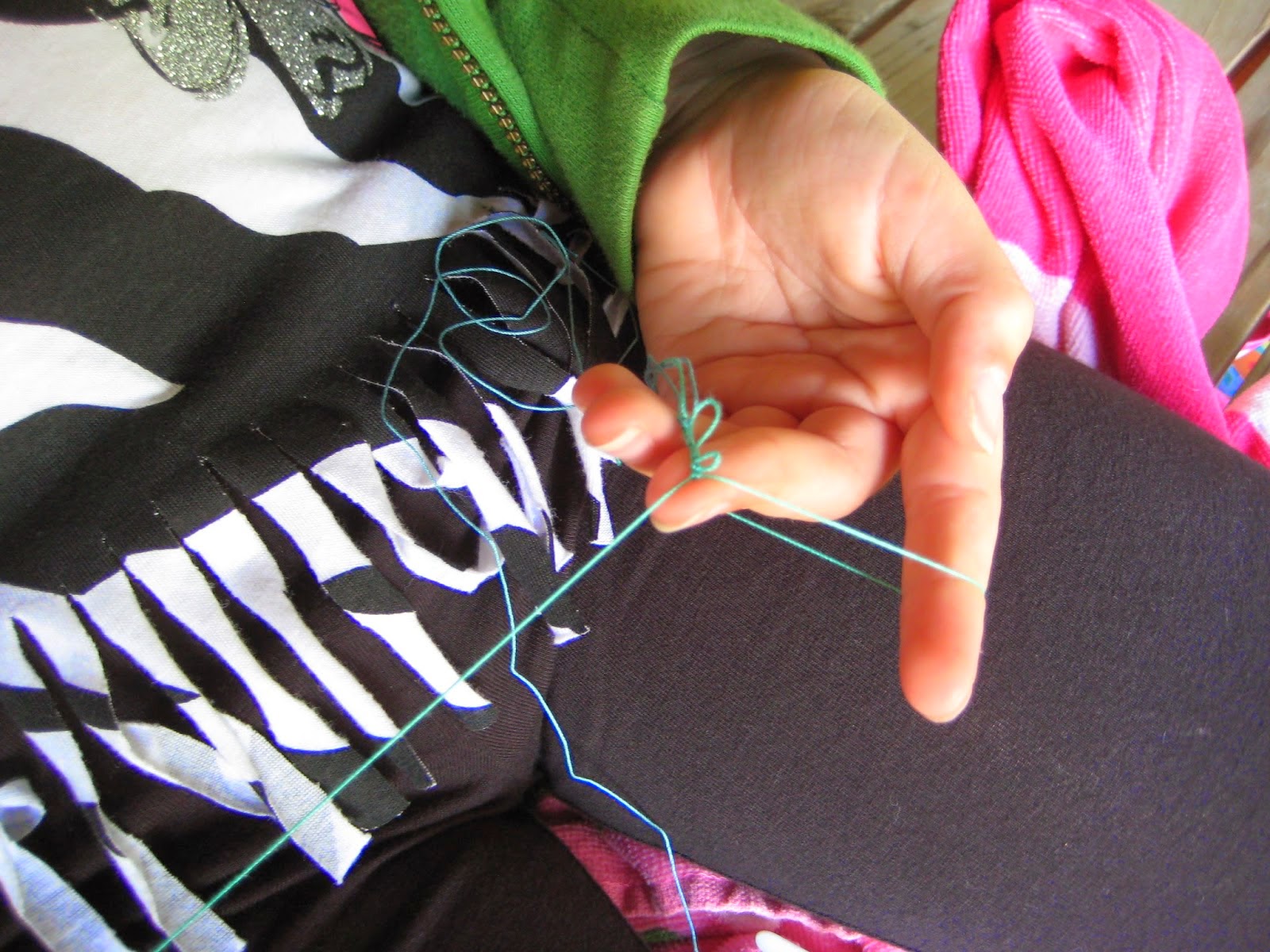 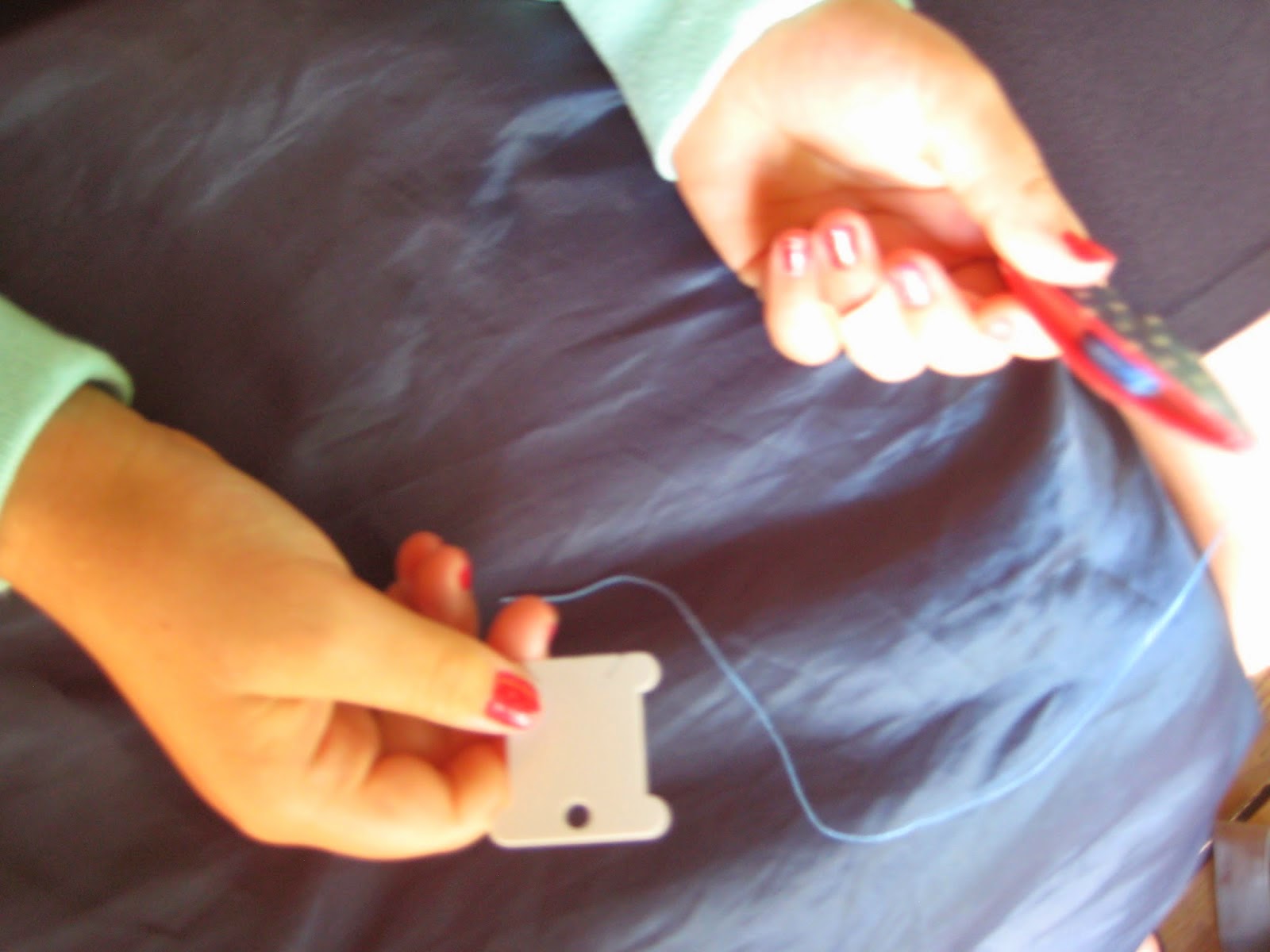 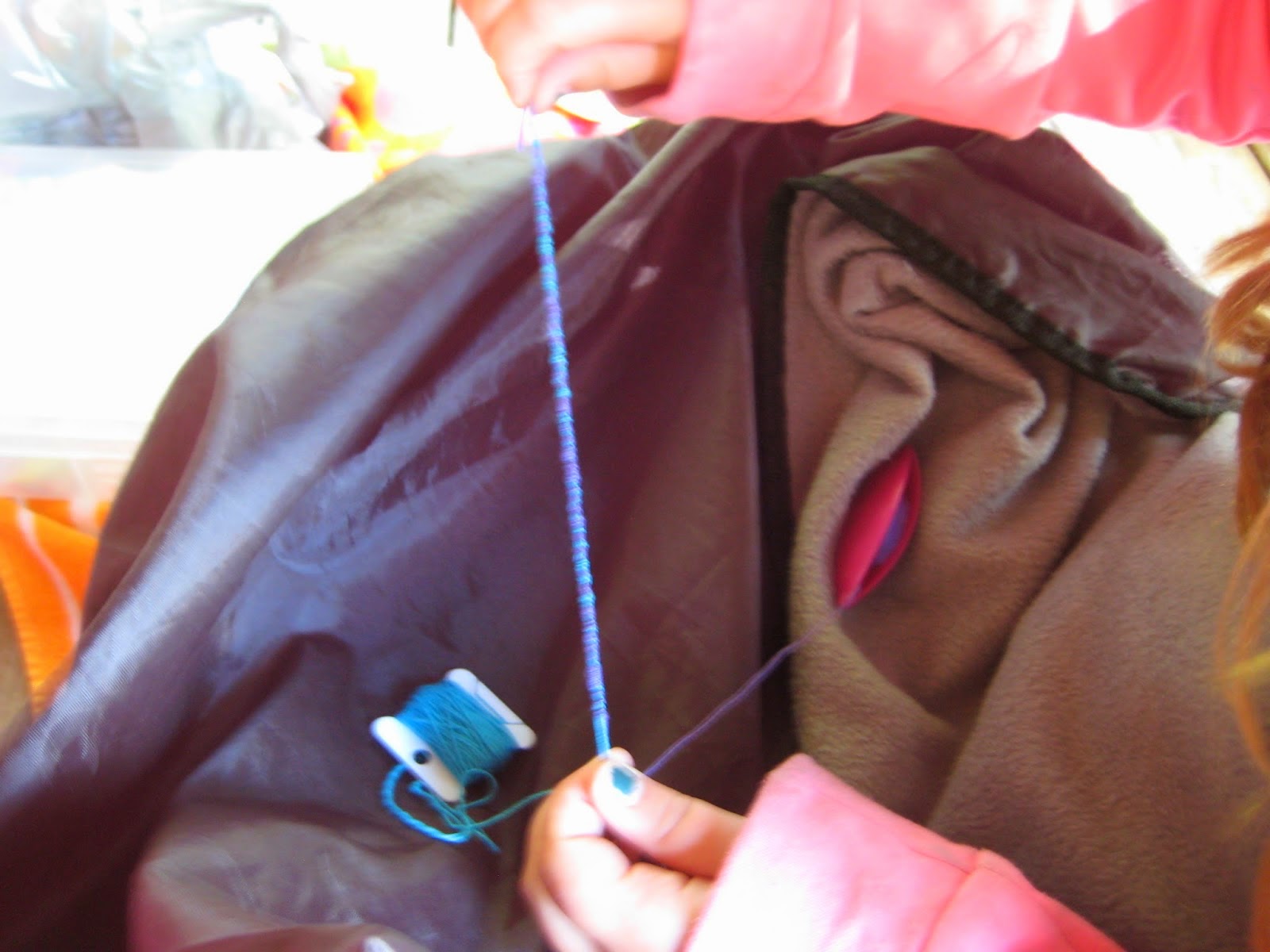 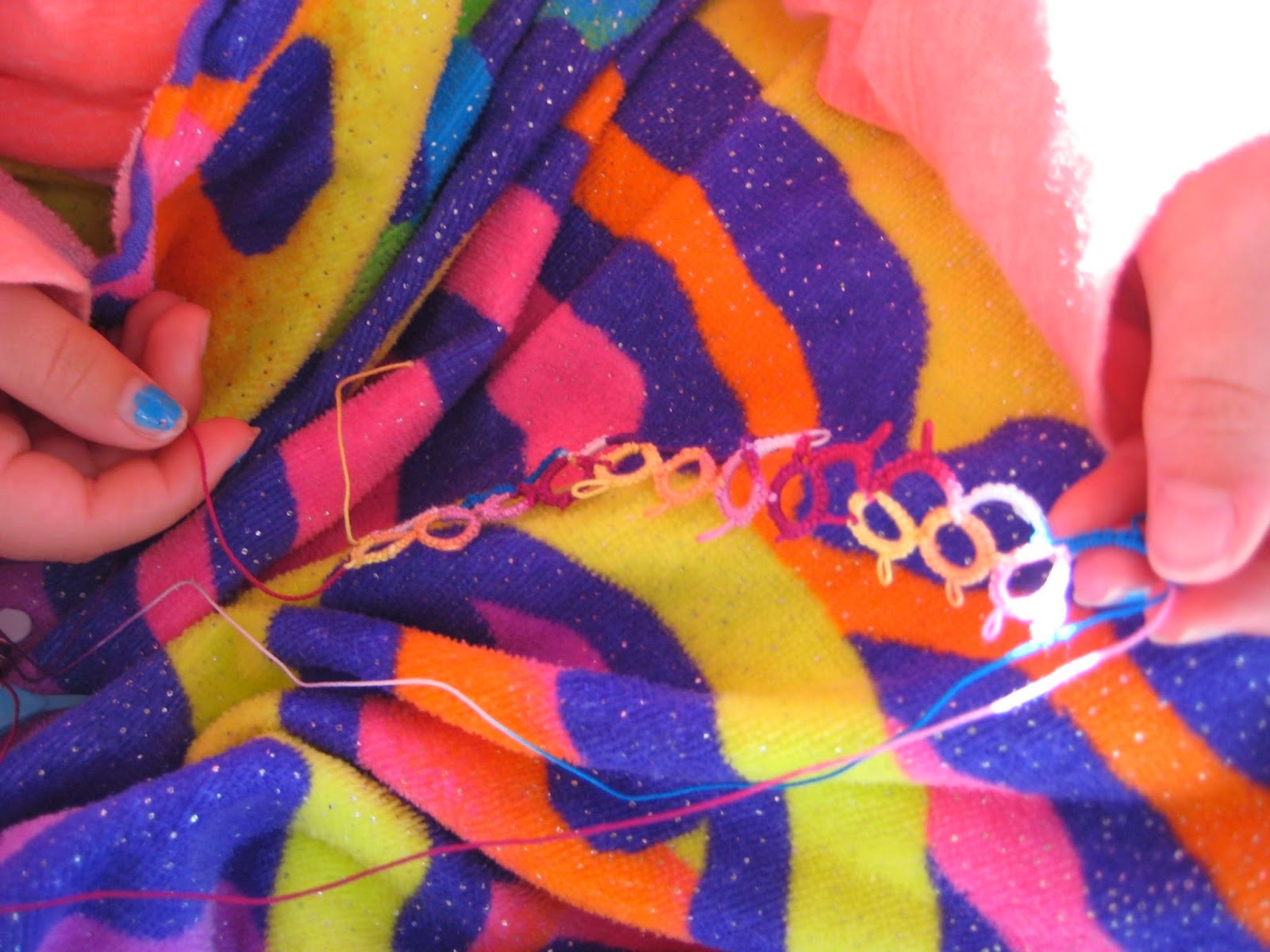 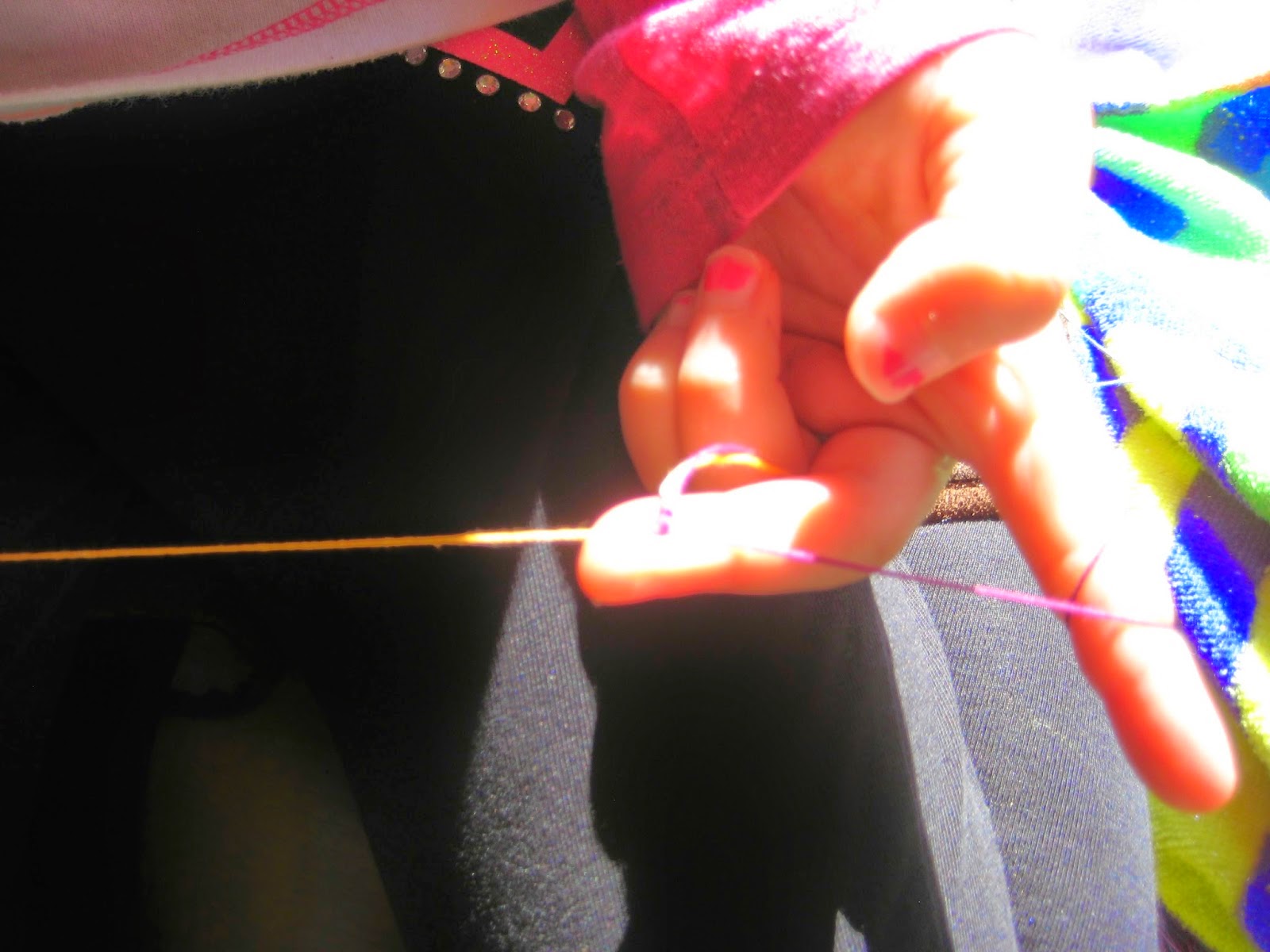 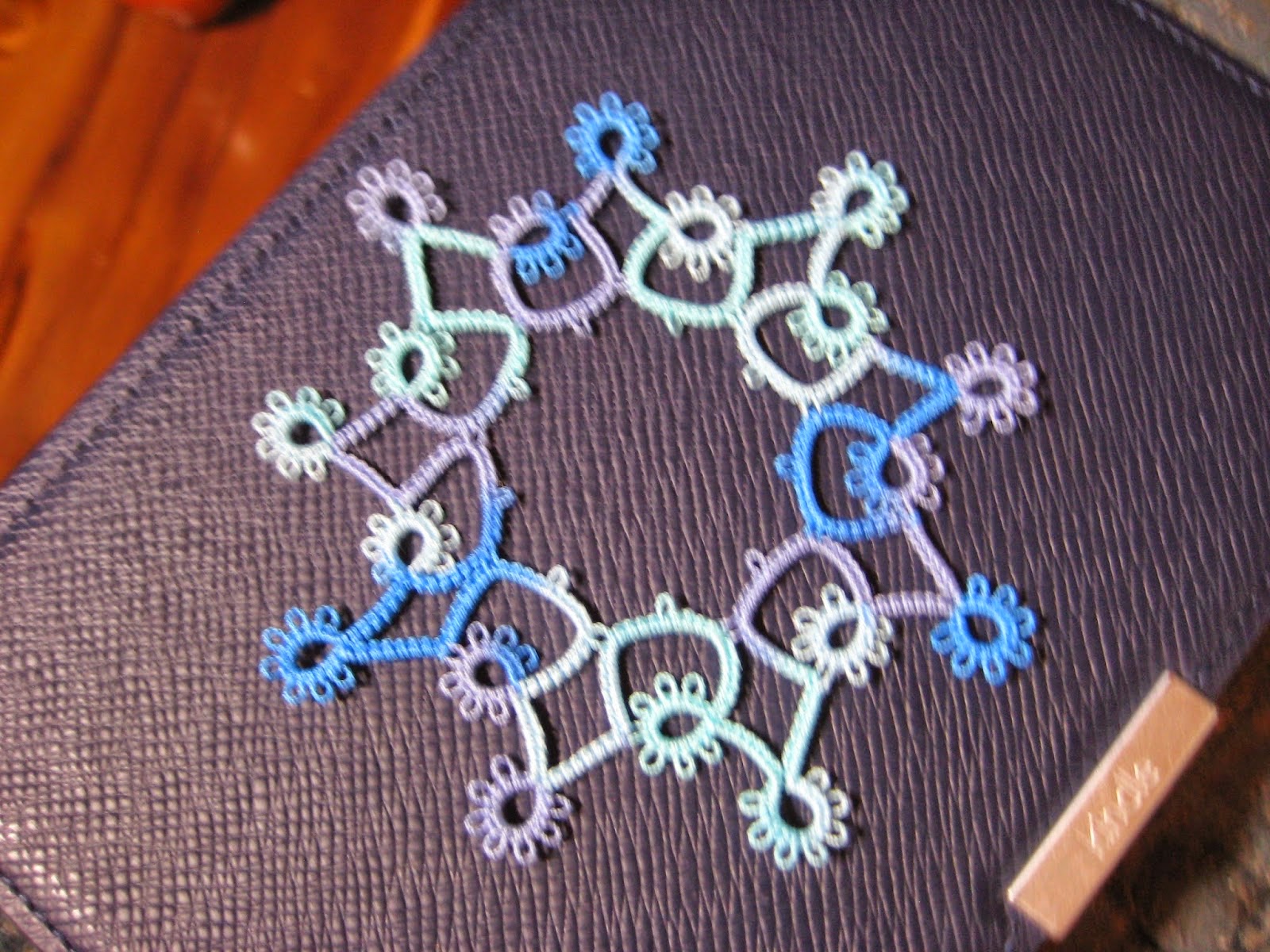 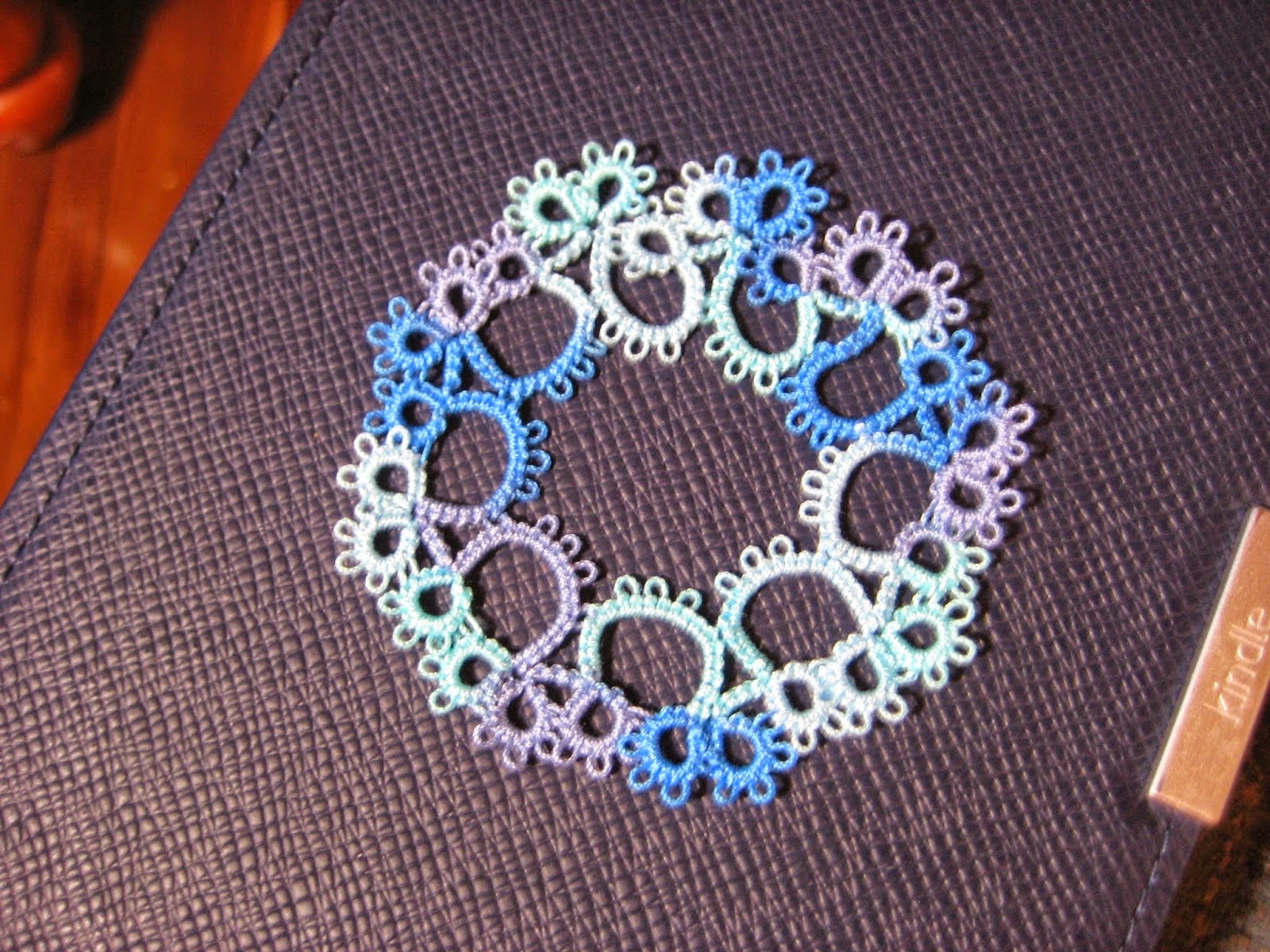 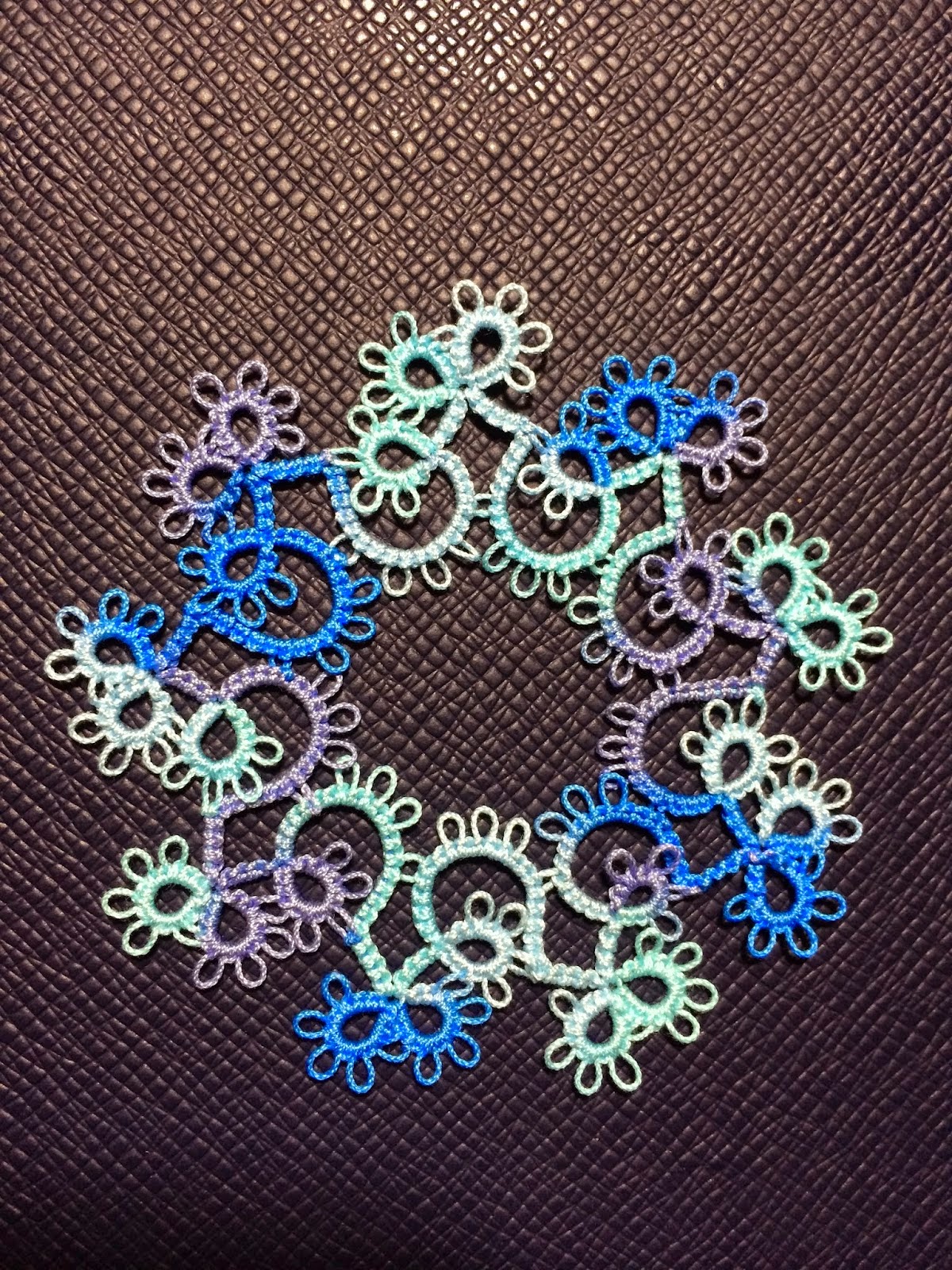 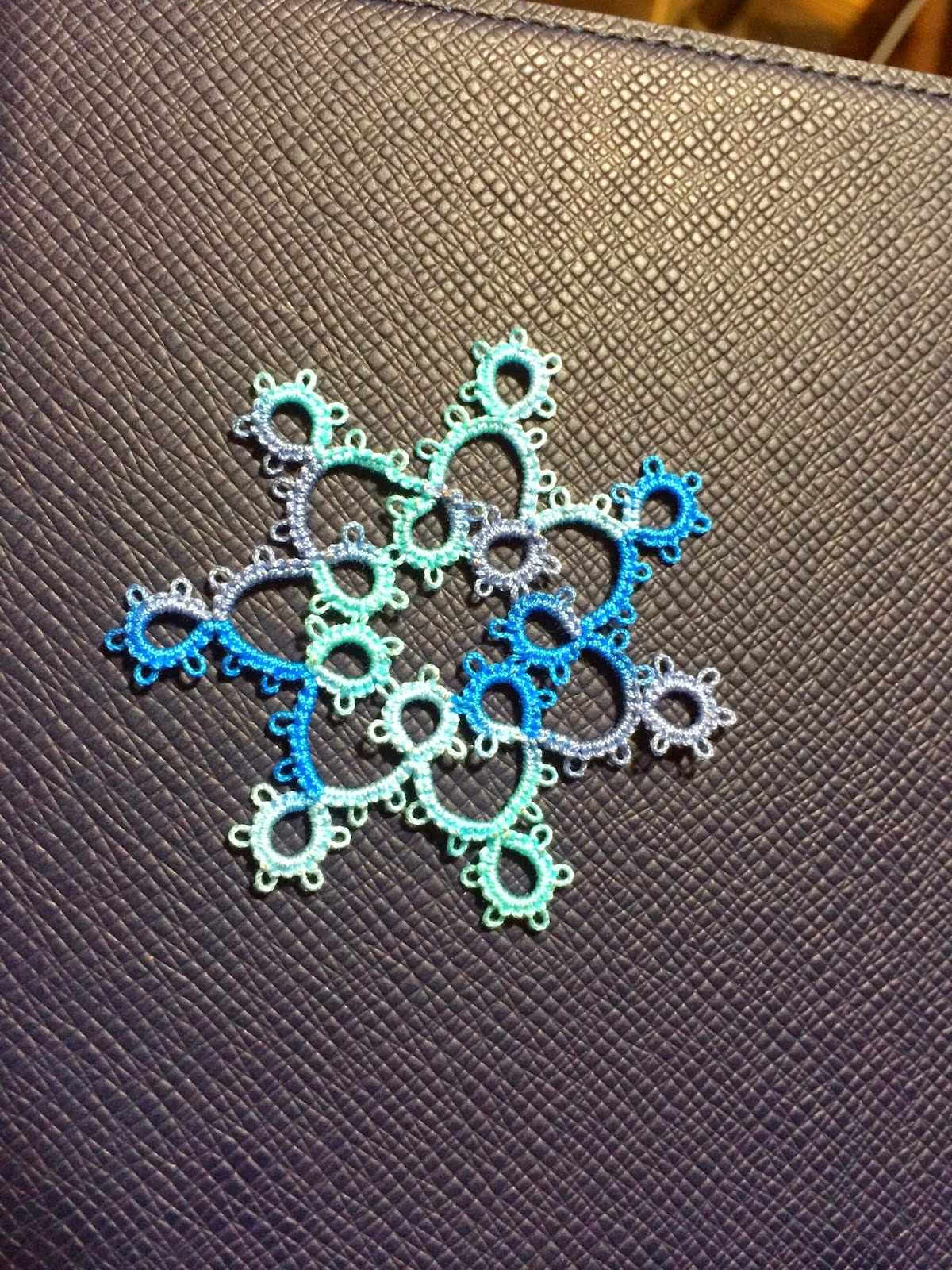 Fox thought Renulek's collar was going to be huge, but when she laid it on a v-necked t-shirt it's the right size for an adult garment. She's begun adding the rings and chains around the Russian design using size 30 Cebelia and this time it seems to be working. 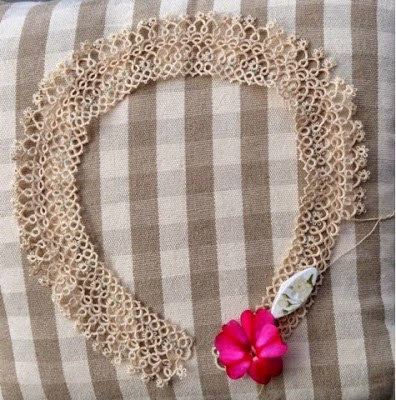 Kristen finished the pillowcase with the Annie Orr edging and entered it in her local fair where it earned a blue ribbon. Also for the fair, she mounted the sunburst doily on a piece of white foam board and it won another blue ribbon. She whipped out this little motif to remind her sister in law how easy tatting is. This started out as a small Annie Orr motif that cupped after the first two rounds and became a flower after she apparently skipped a whole bunch of rings in the final round. (It's not a mistake, it's a design variation!) She was able to share her 3D flower with a nice Chinese lady she met on the train back from Edinburgh. 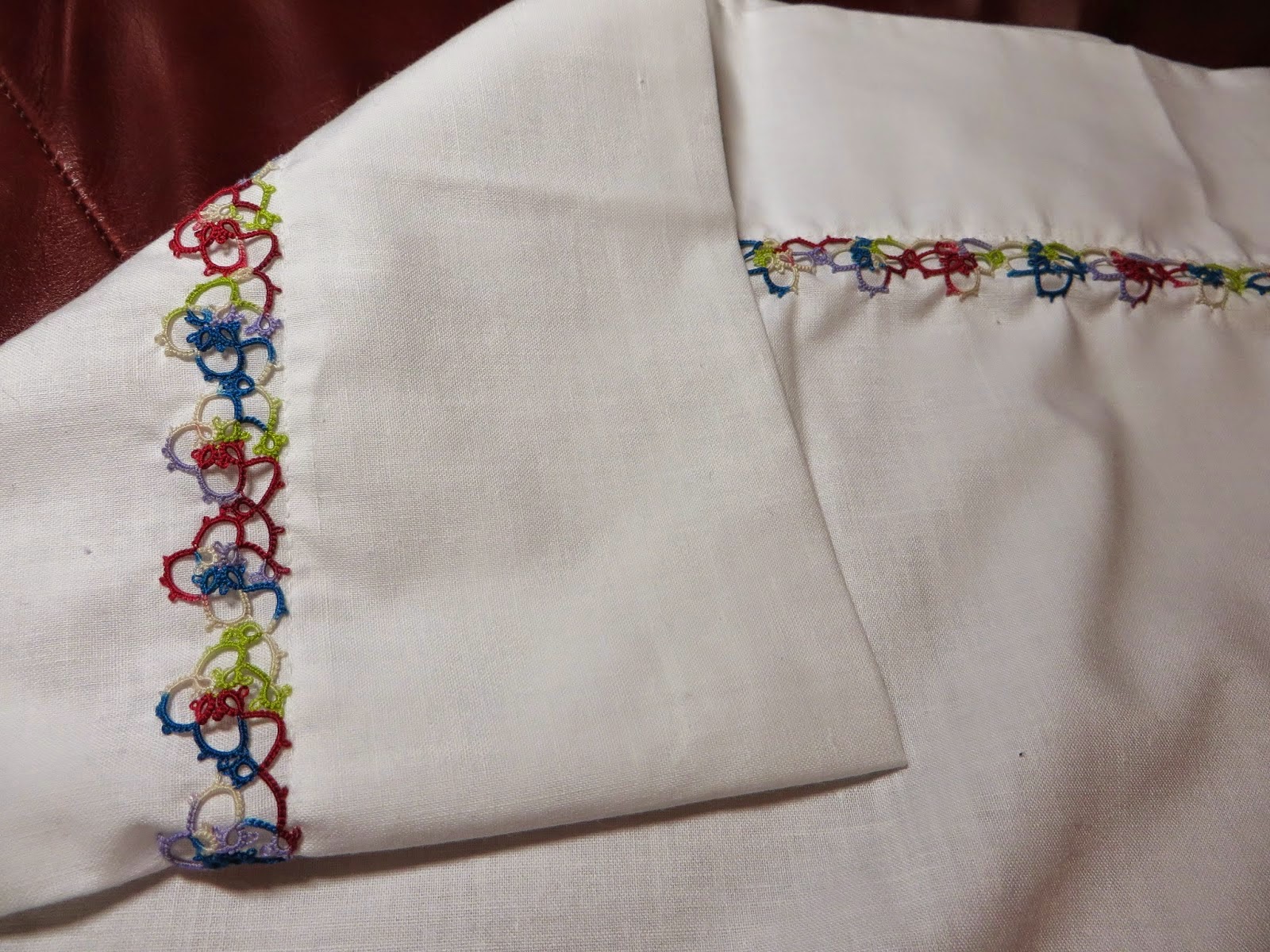 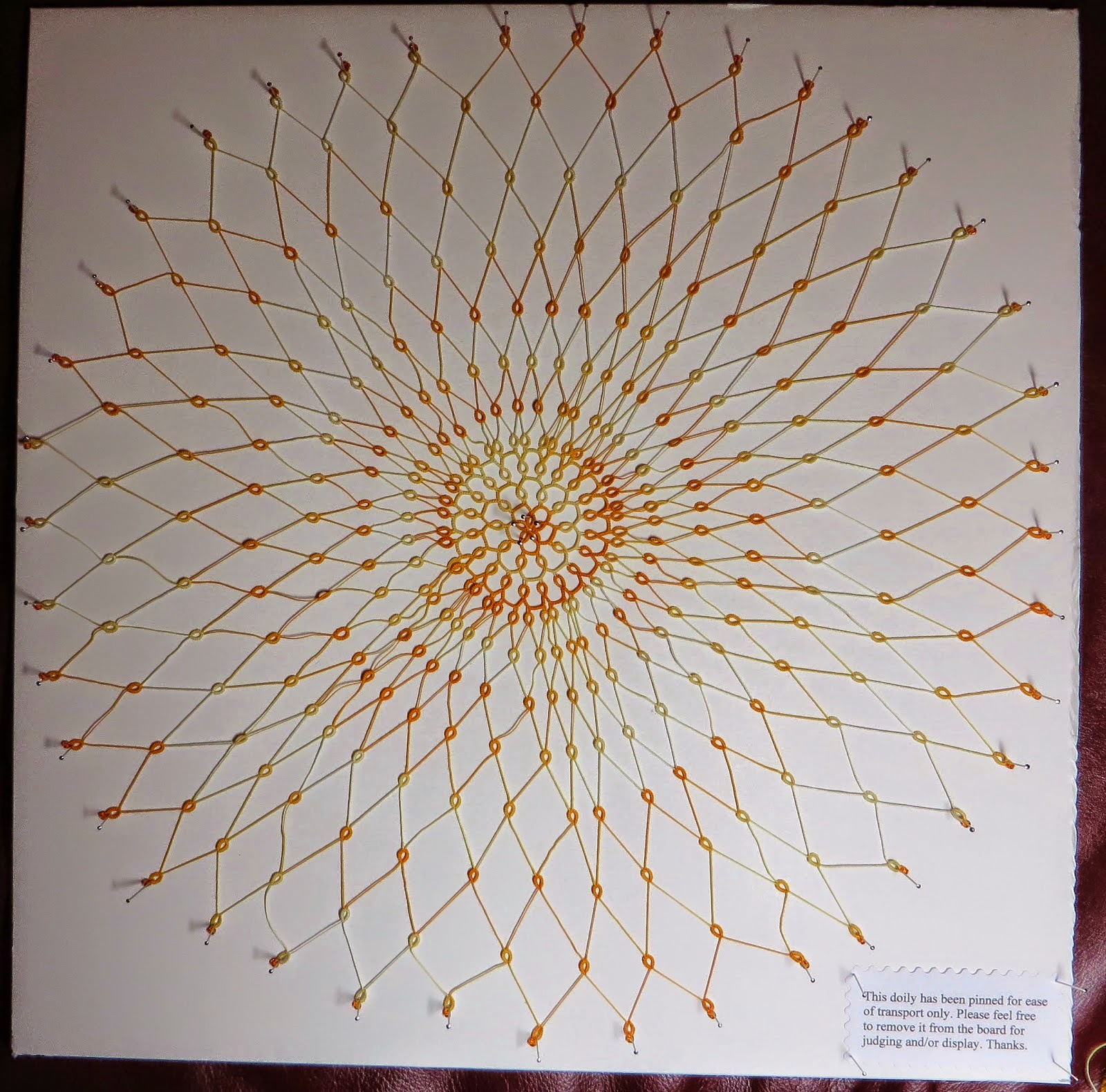 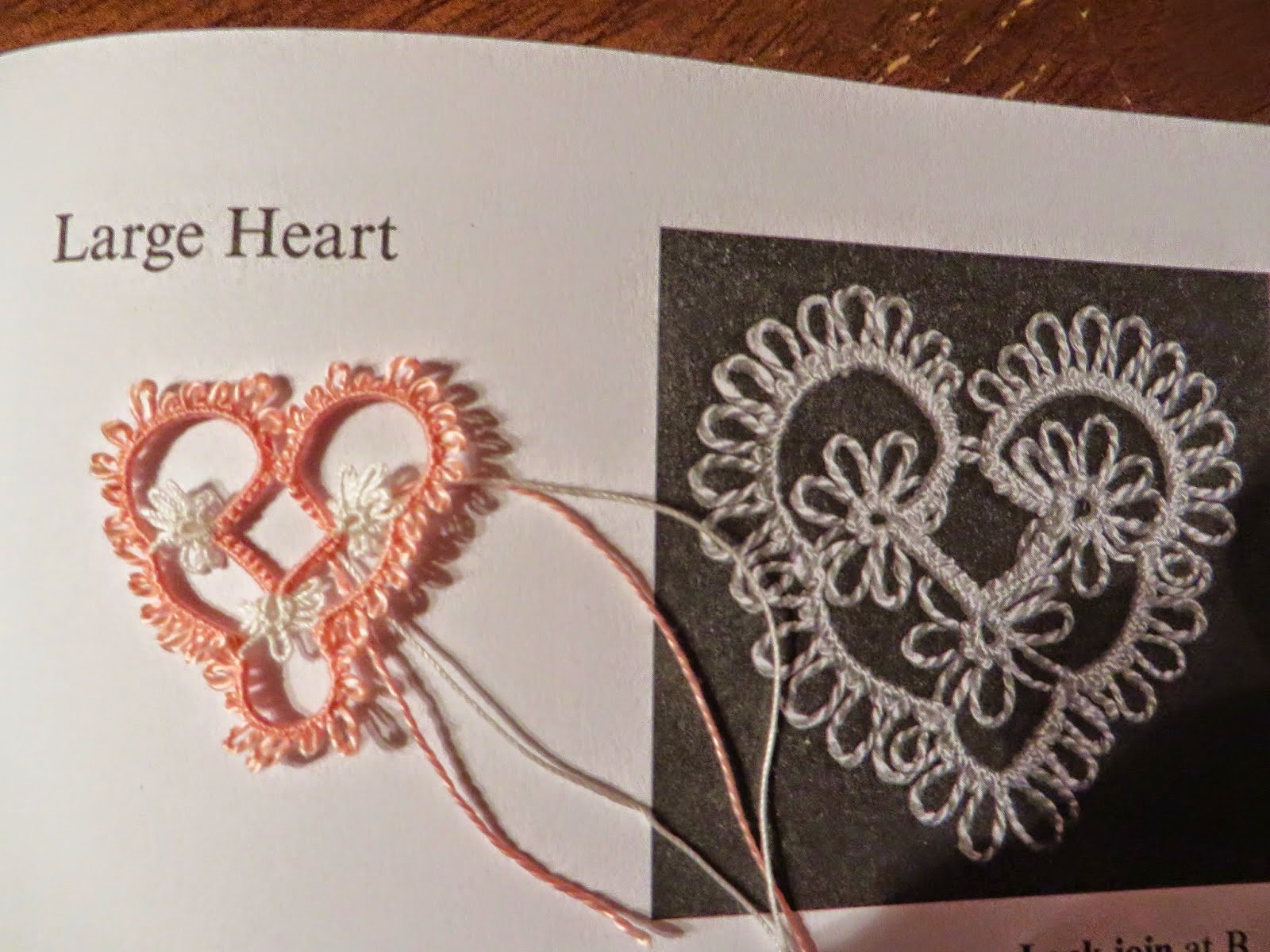 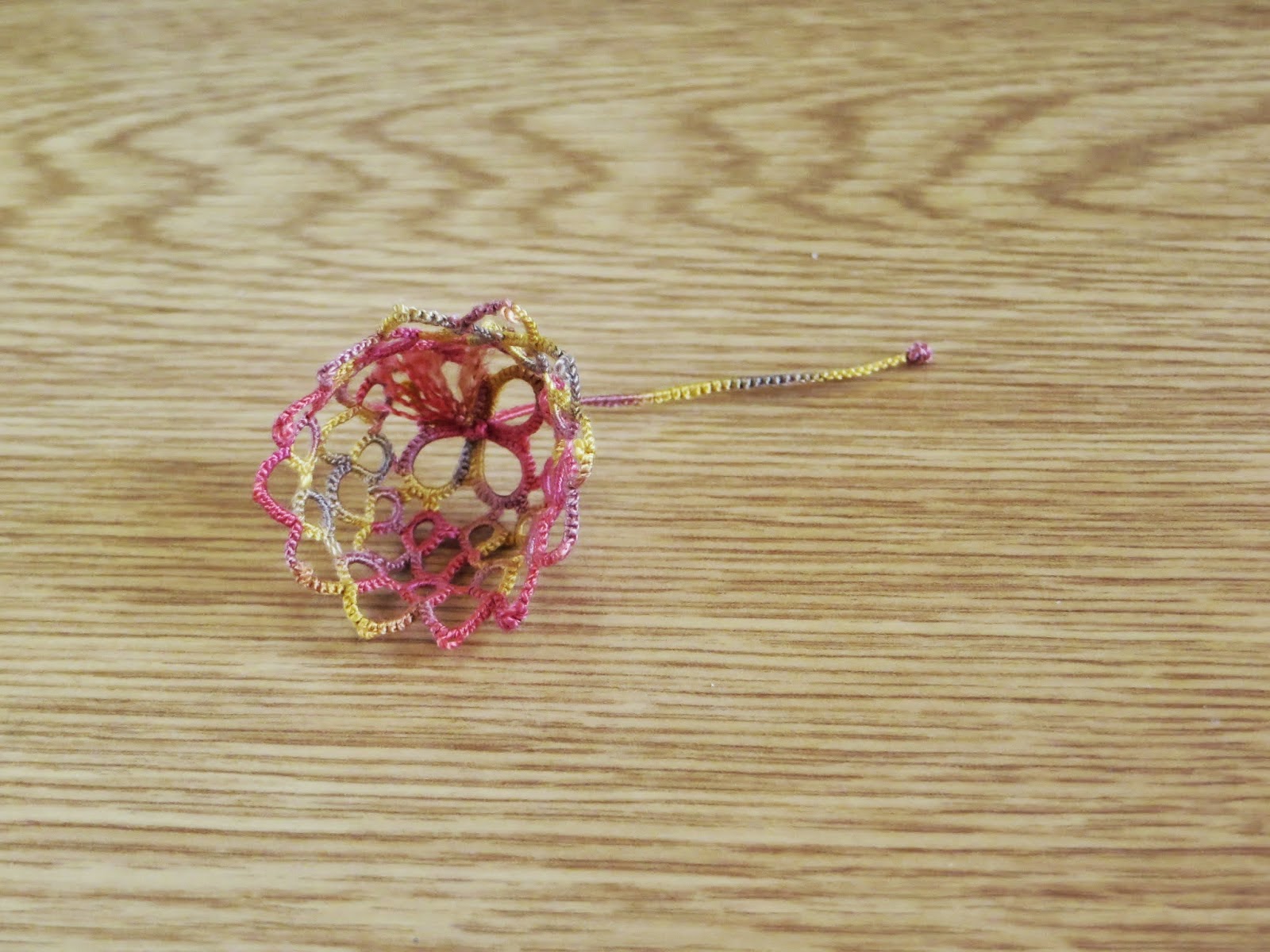 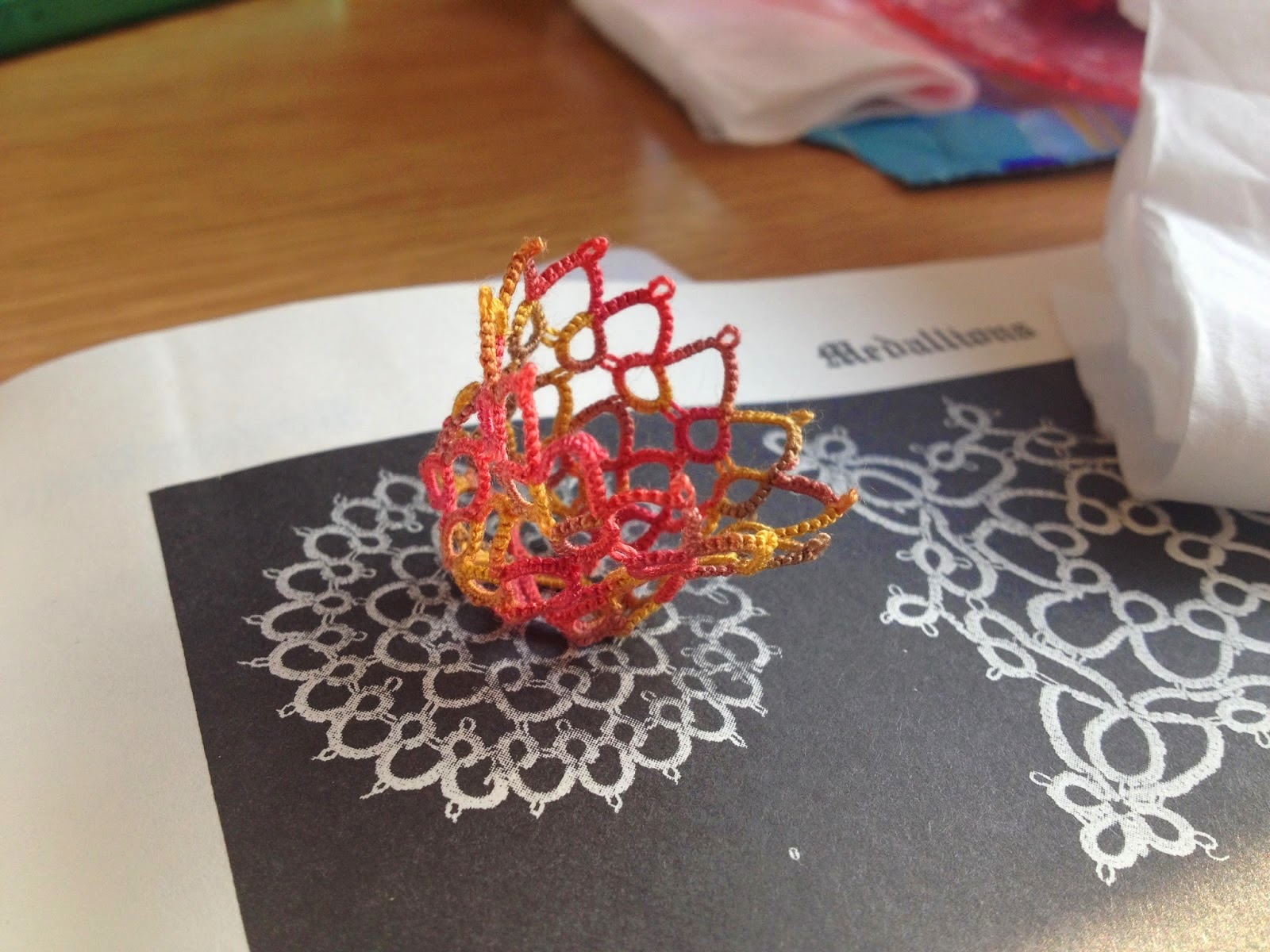 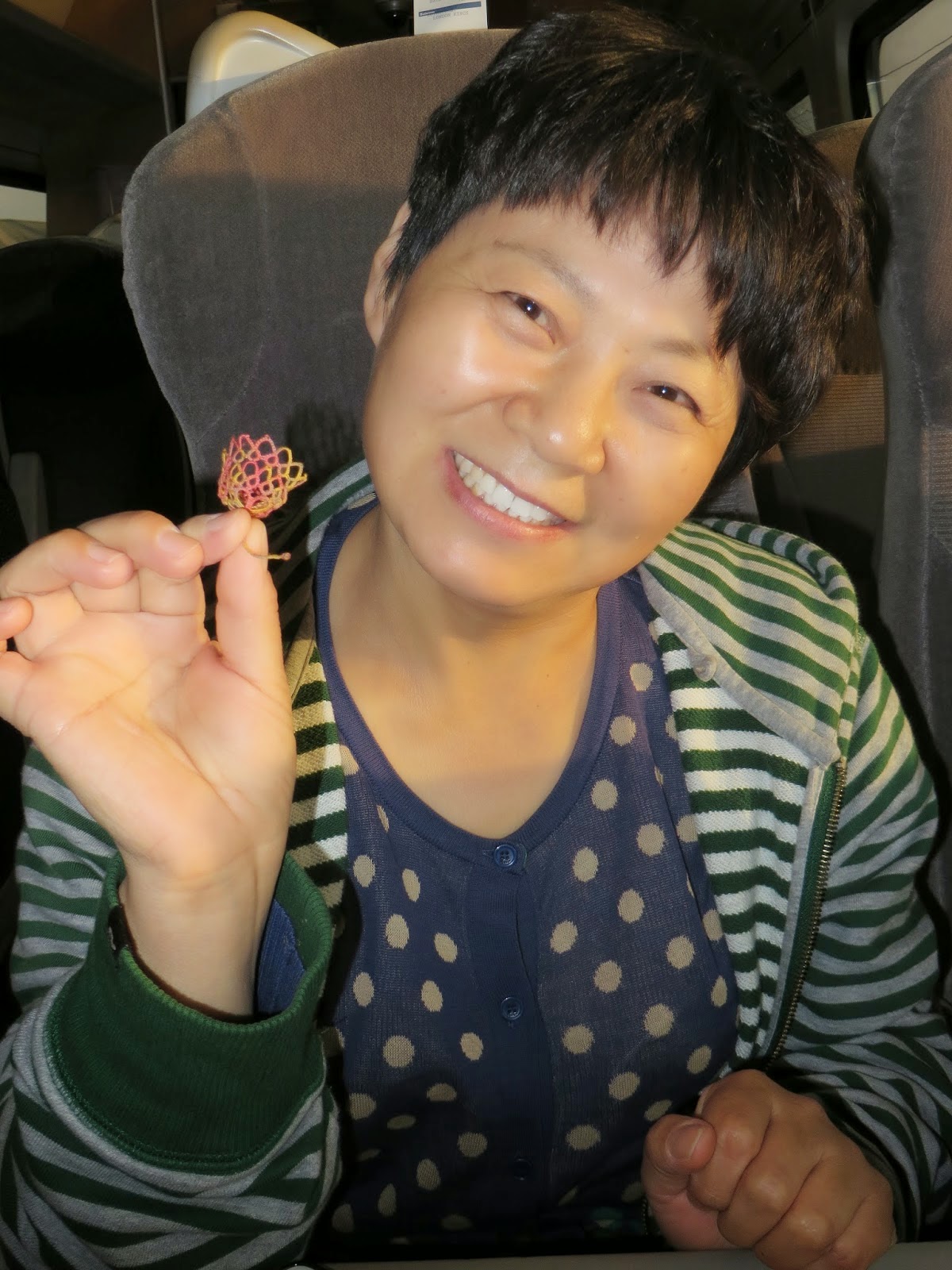 Marie made this icy, sparkly, Cool pendant with two stands of silver sewing thread. A variation of the design with more beads gave a ruffled 3D effect to this next pendant. Of course what is a pendant without matching earrings. 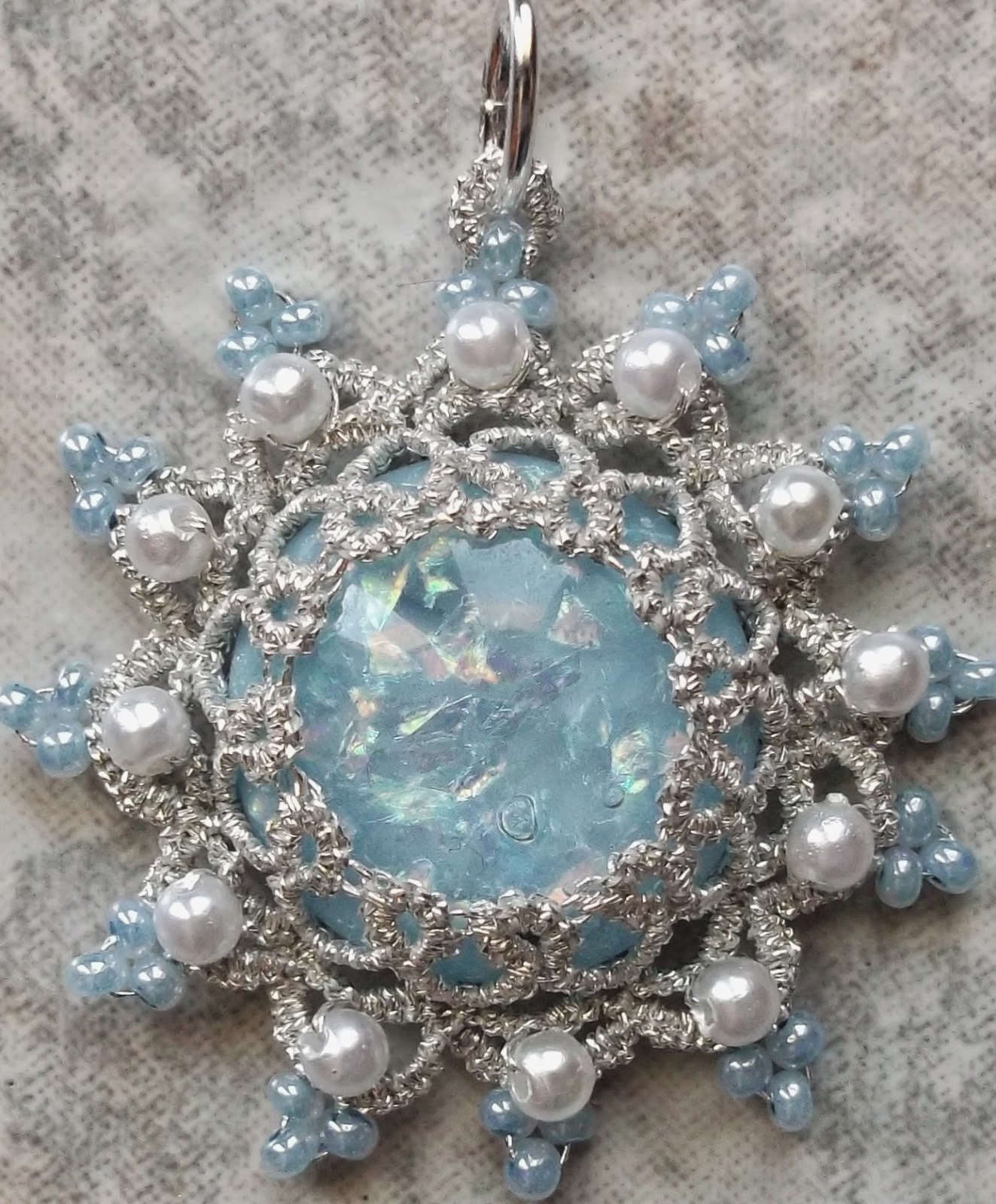 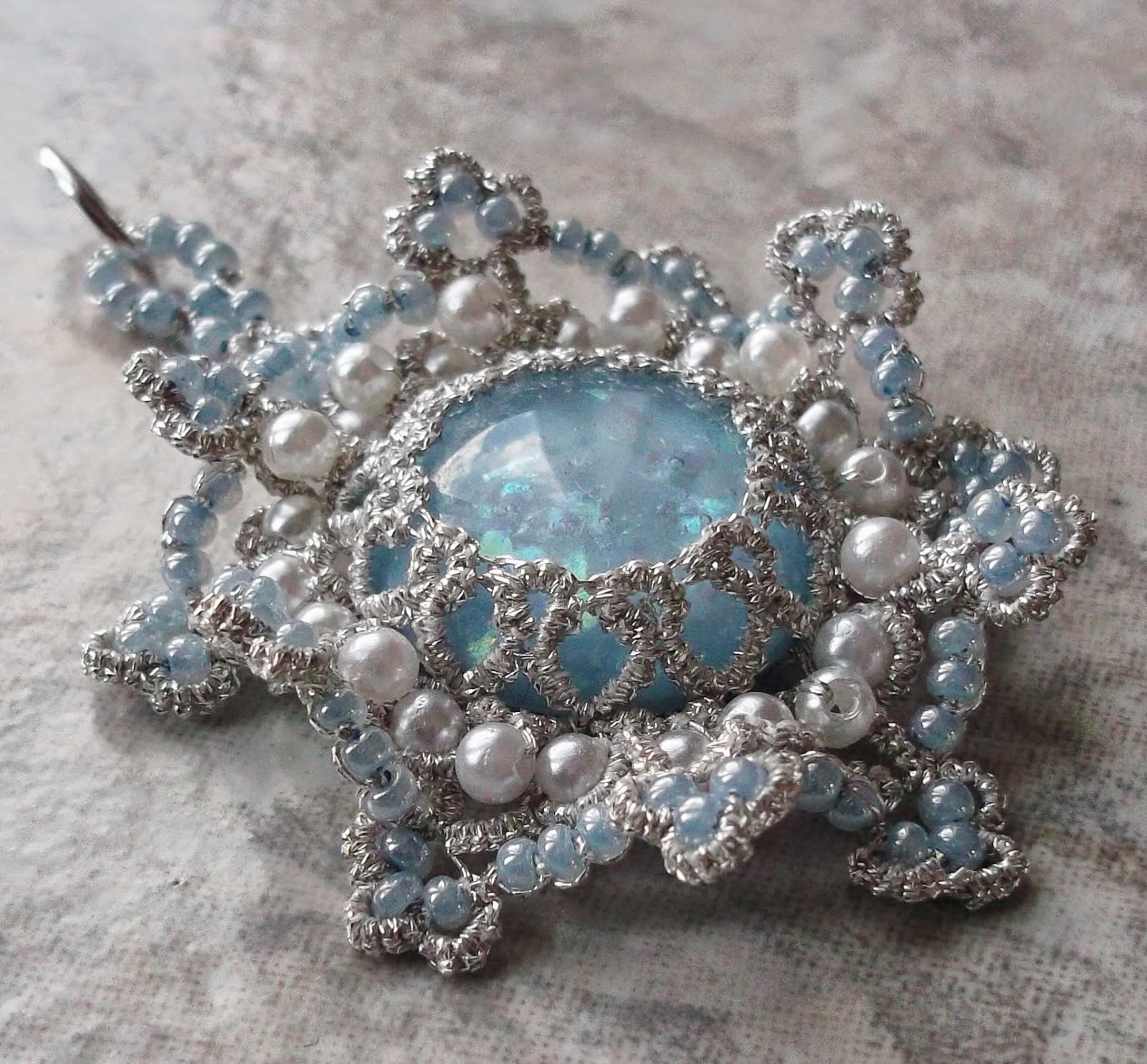 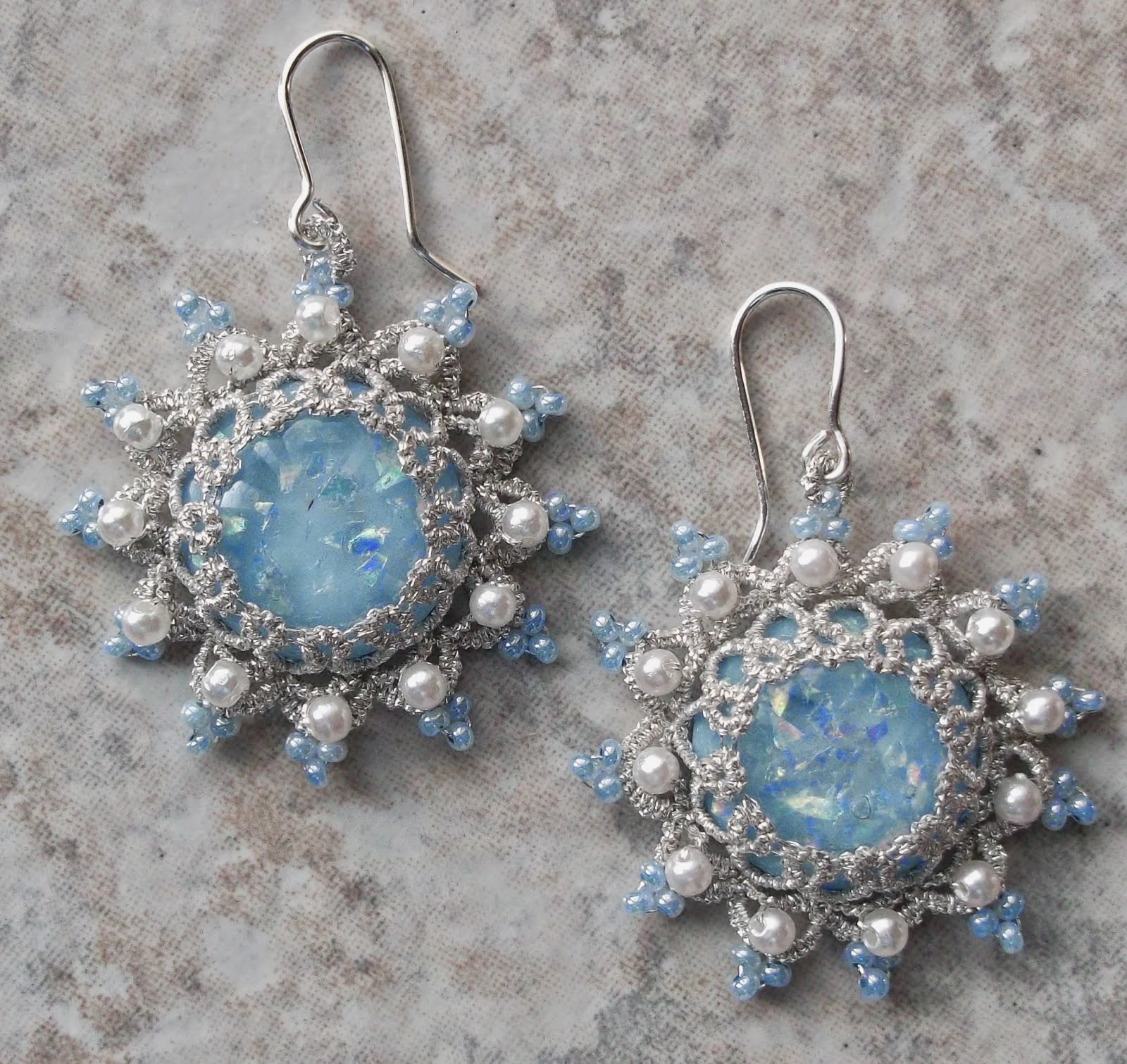