Batty Tatter has displayed Renulek's Spring doily on her old stereo speaker, which it covers nicely. 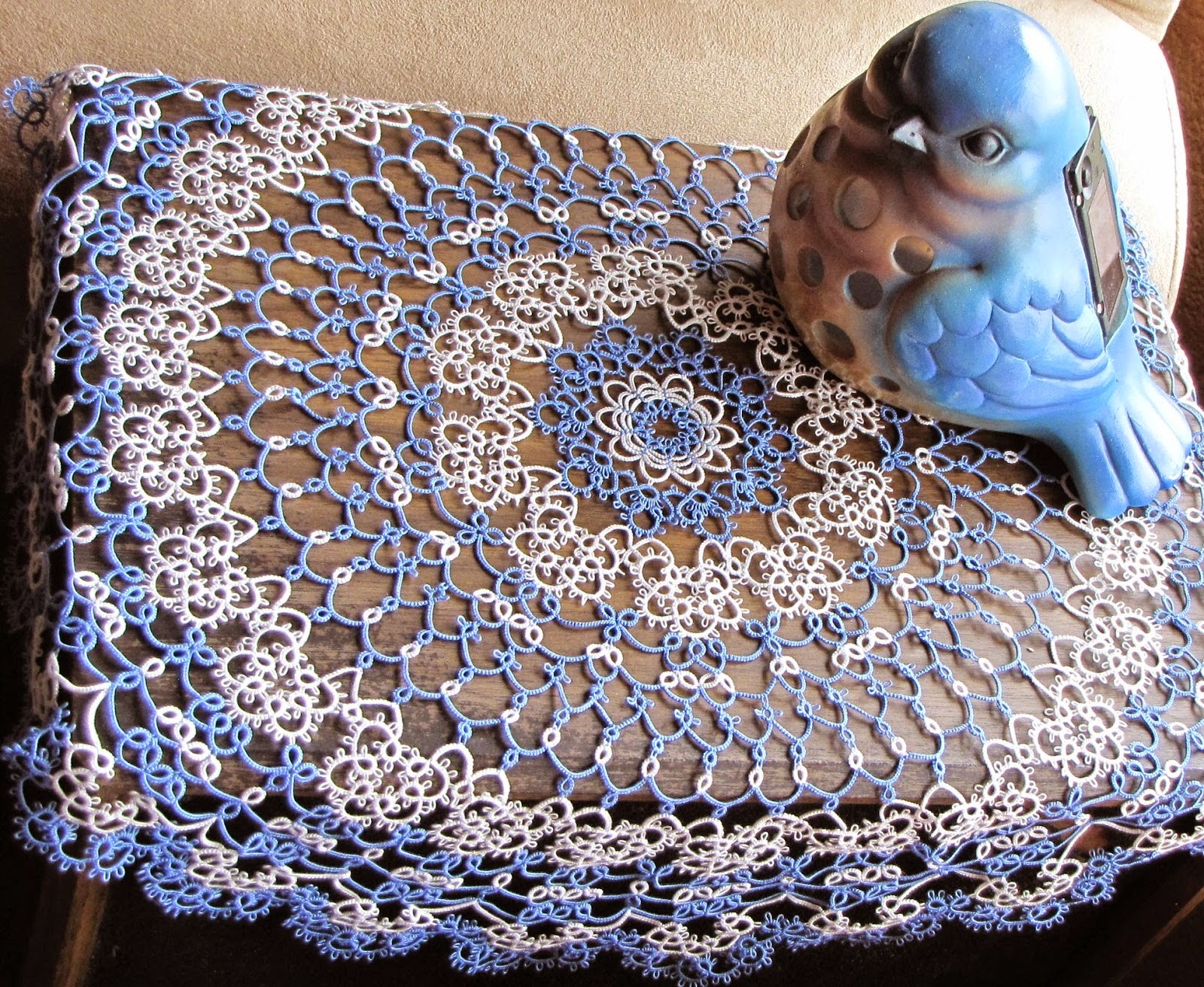 Sue was finally able to post a picture of her wearing the necklace she won.

Phyllis received a surprise package from a tatting friend in Spain, that has thread, beads, and a motif which she will make into a nice brooch. 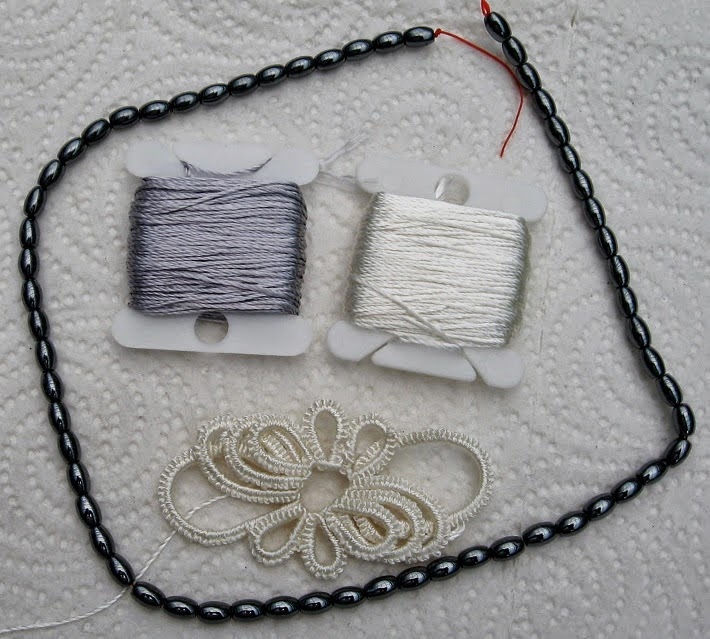 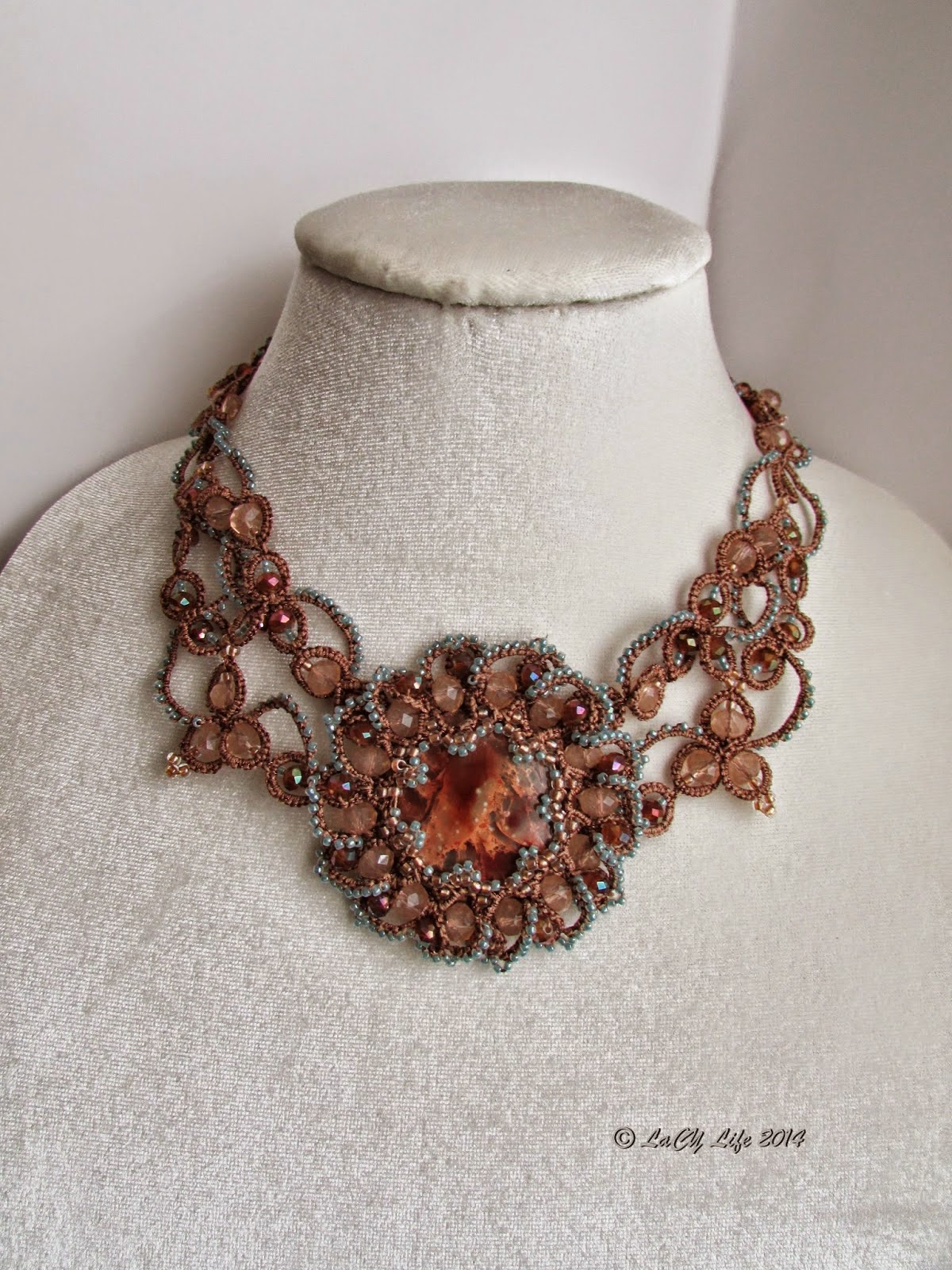 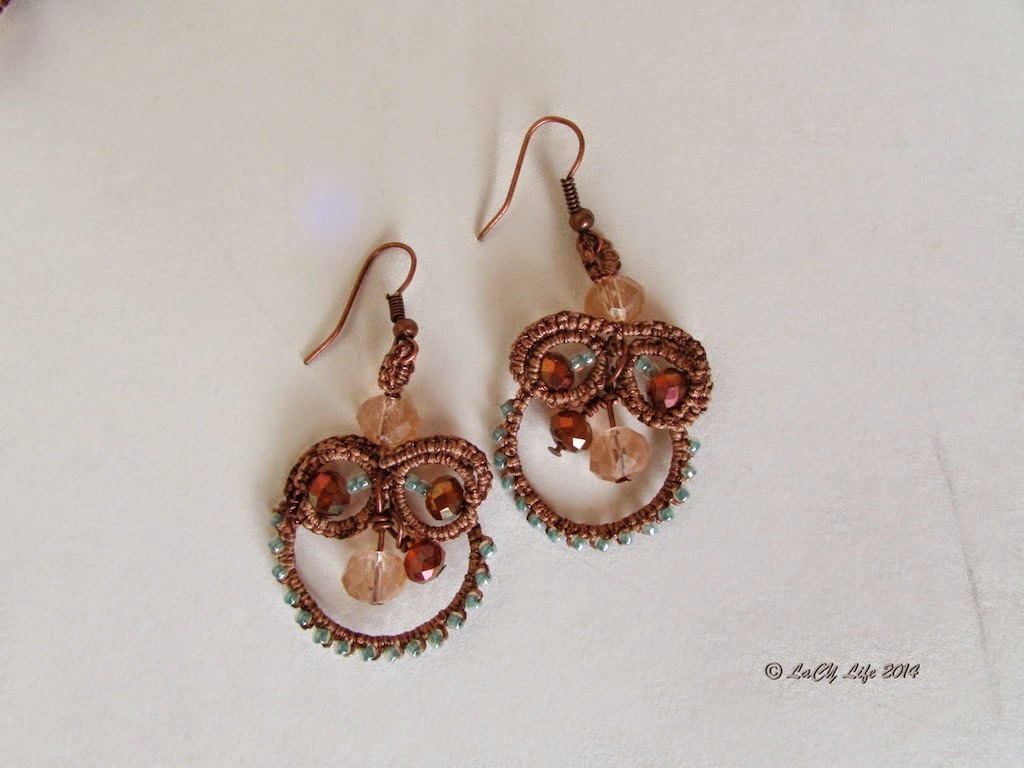 Lelia admired Ann's inventive tatting press, but couldn't quite figure out how to put it all together, so instead she exchanged an origami bag with Deb, for a tatting press and immediately put it to use. The tatting is pattern No.4 of Nellie Hall Youngburg being done in size 80 DMC #59. 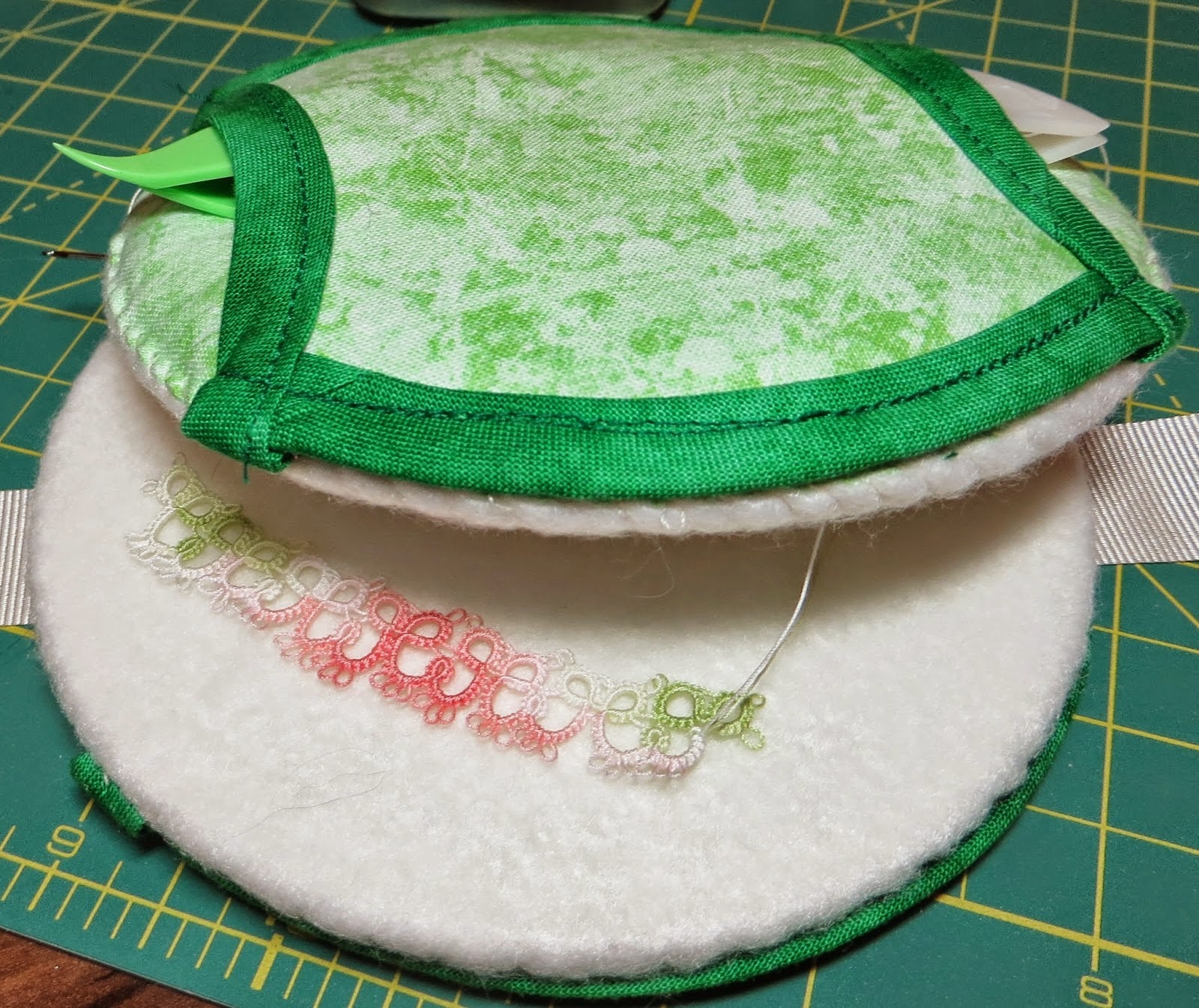 Linda tatted the rocking horse from a pattern by Pam Palmer in size 80 with Lizbeth Root Beer, which she plans to add to a Christmas stocking. The Angel pattern is in Patty Duff's book of Motifs and tatted with size 20 Lizbeth threads while the crosses are a pattern by Eliz Davis tatted with different brands of size 10  threads. They are for a local shop and because they are quick and easy to tat they can be sold without charging a lot. 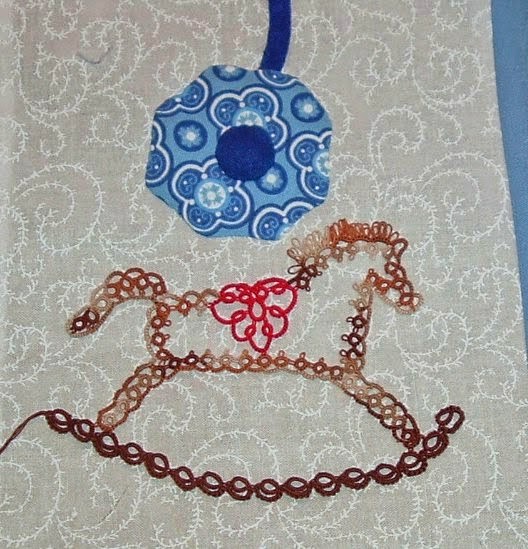 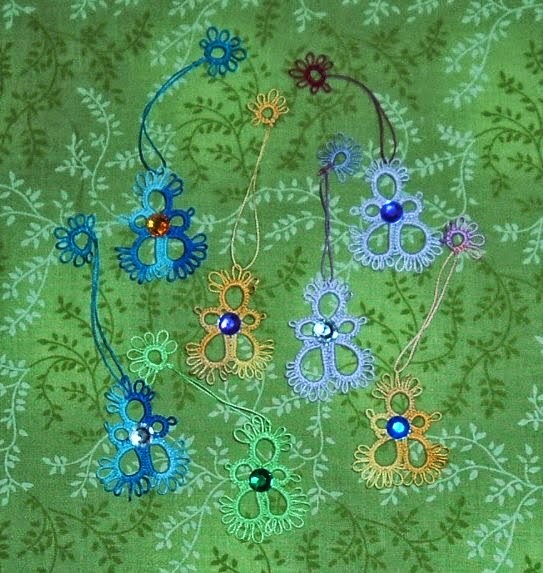 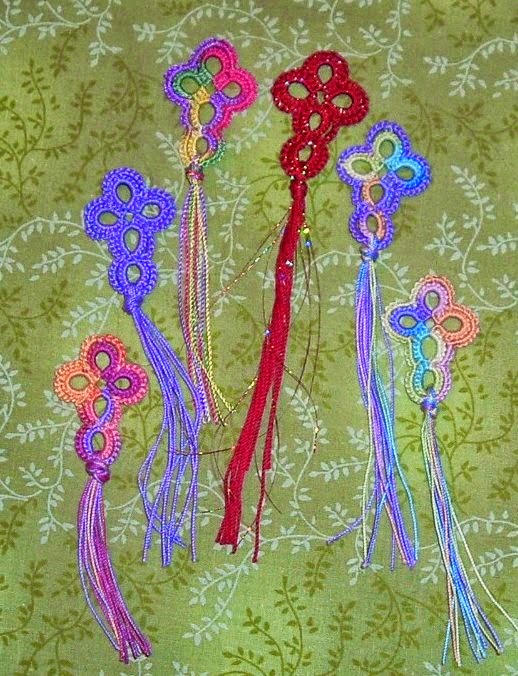 Fox had to dampen the edging in order to get ready to join the end element. While waiting for it to dry, she started a very small motif from a Georgia Seitz book, a design by Doretha Albee in purple Finca size 12. She loved the colour, but not the thread. The Georgia Setiz’s pattern from Tatting on the Edge...and Beyond was tatted again, using #30 Cèbèlia in ecru, and looks nicer than it did in the purple. 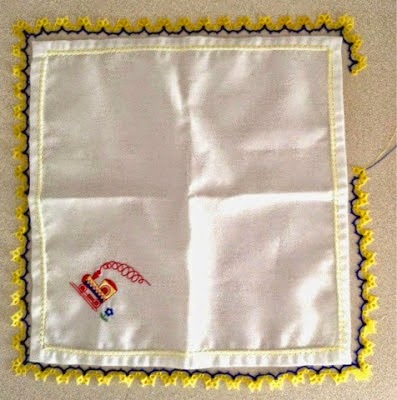 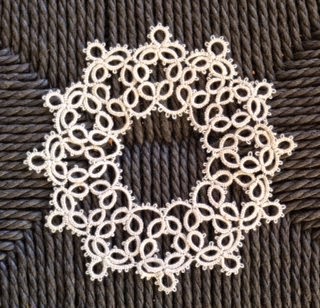 Kristen used Cathy Bryant's book, Tatting, to make this baby bootie, which is quite small but bigger than the first option. The  next one she thinks is a Lenore English pattern which seems to be a better size. She's had her fill of pink now and and went on to blue. She did one bookmark to practice and one perfected, which coincidentally brought her to another 25 motifs. Her first attempt at beanile tatting is a Beaded Necklace by Nina Libin and she realized about halfway through that she was using the Needle Tatting pattern to make this necklace, so now she wants to do it again with 2 shuttles. 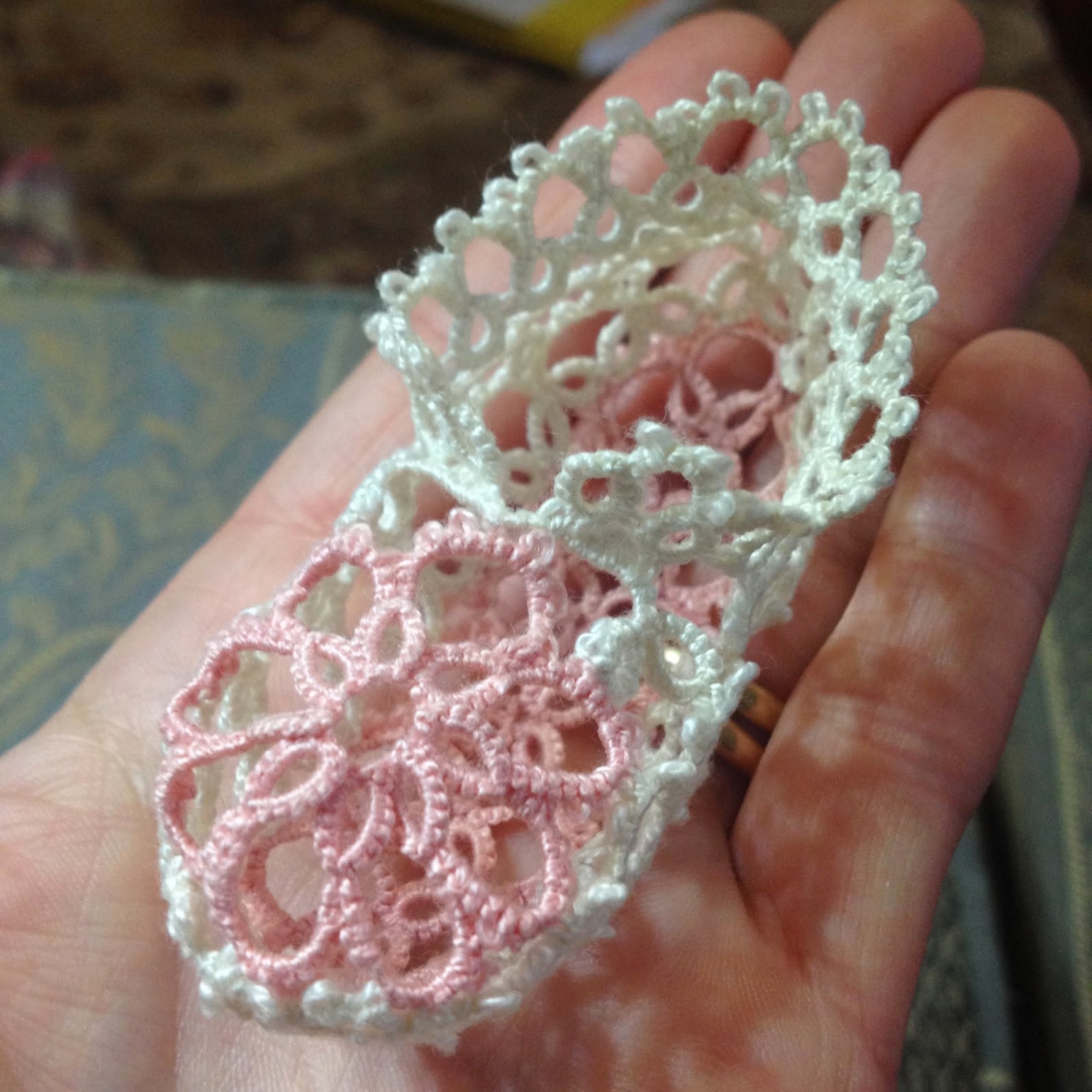 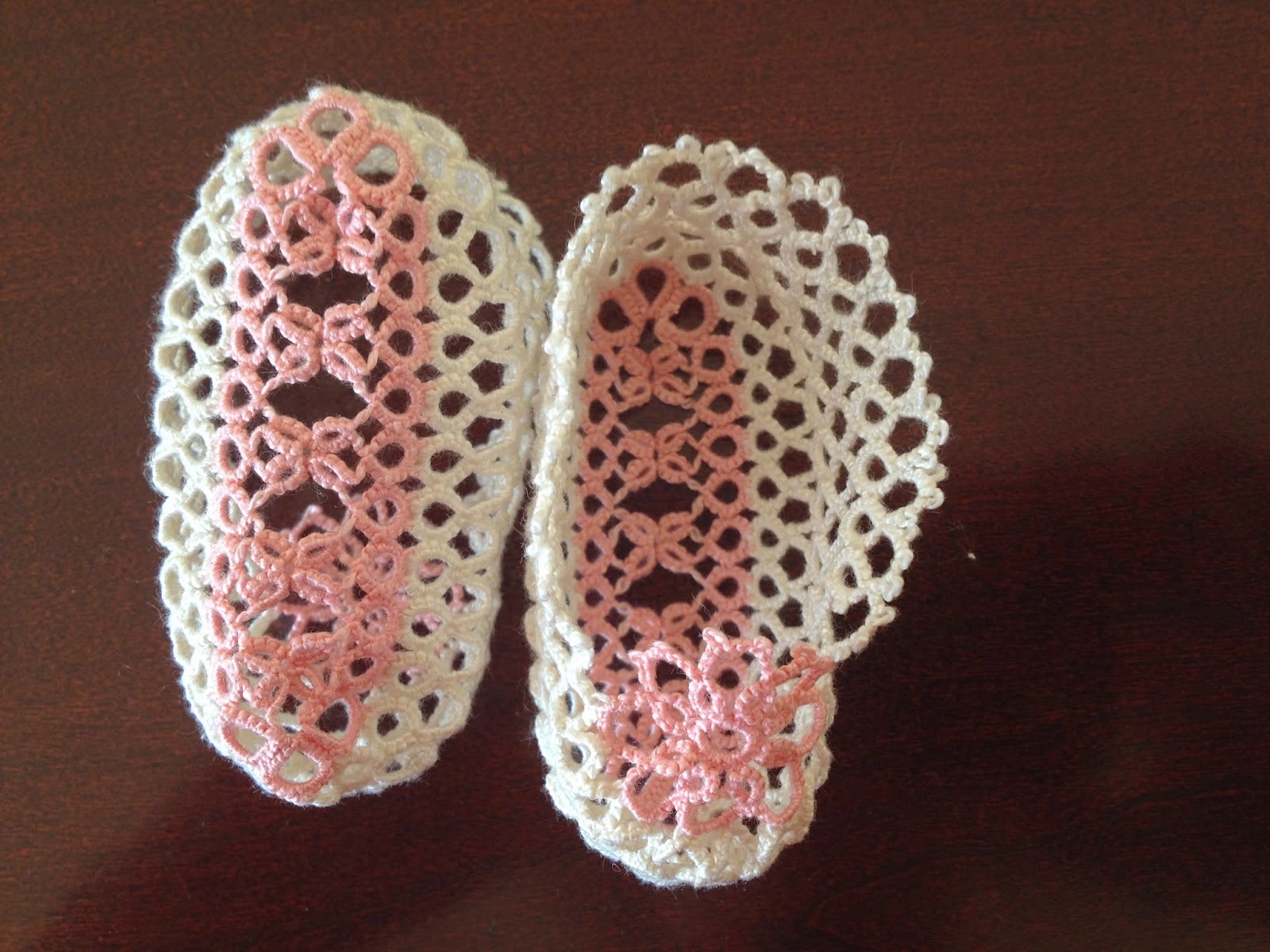 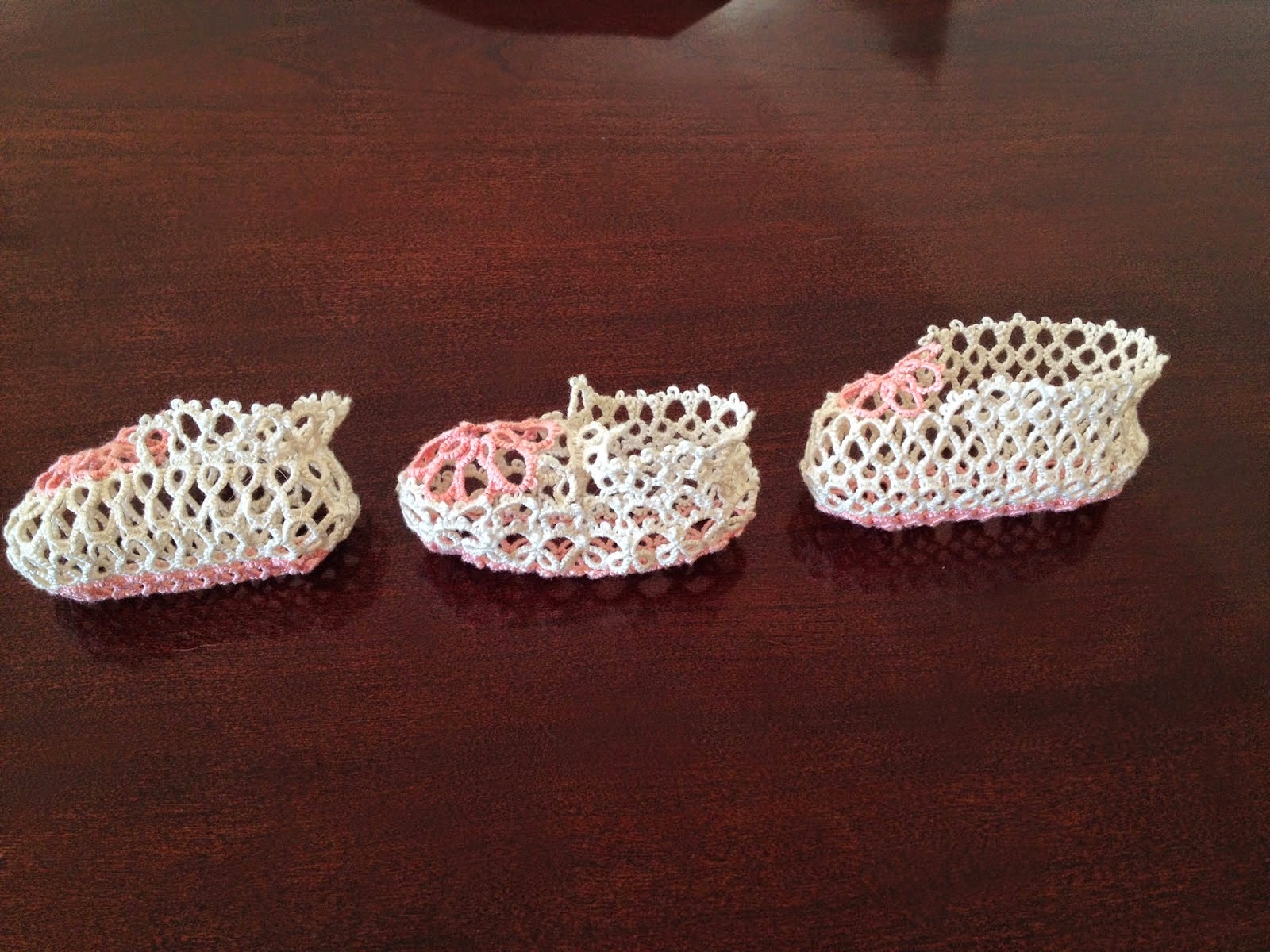 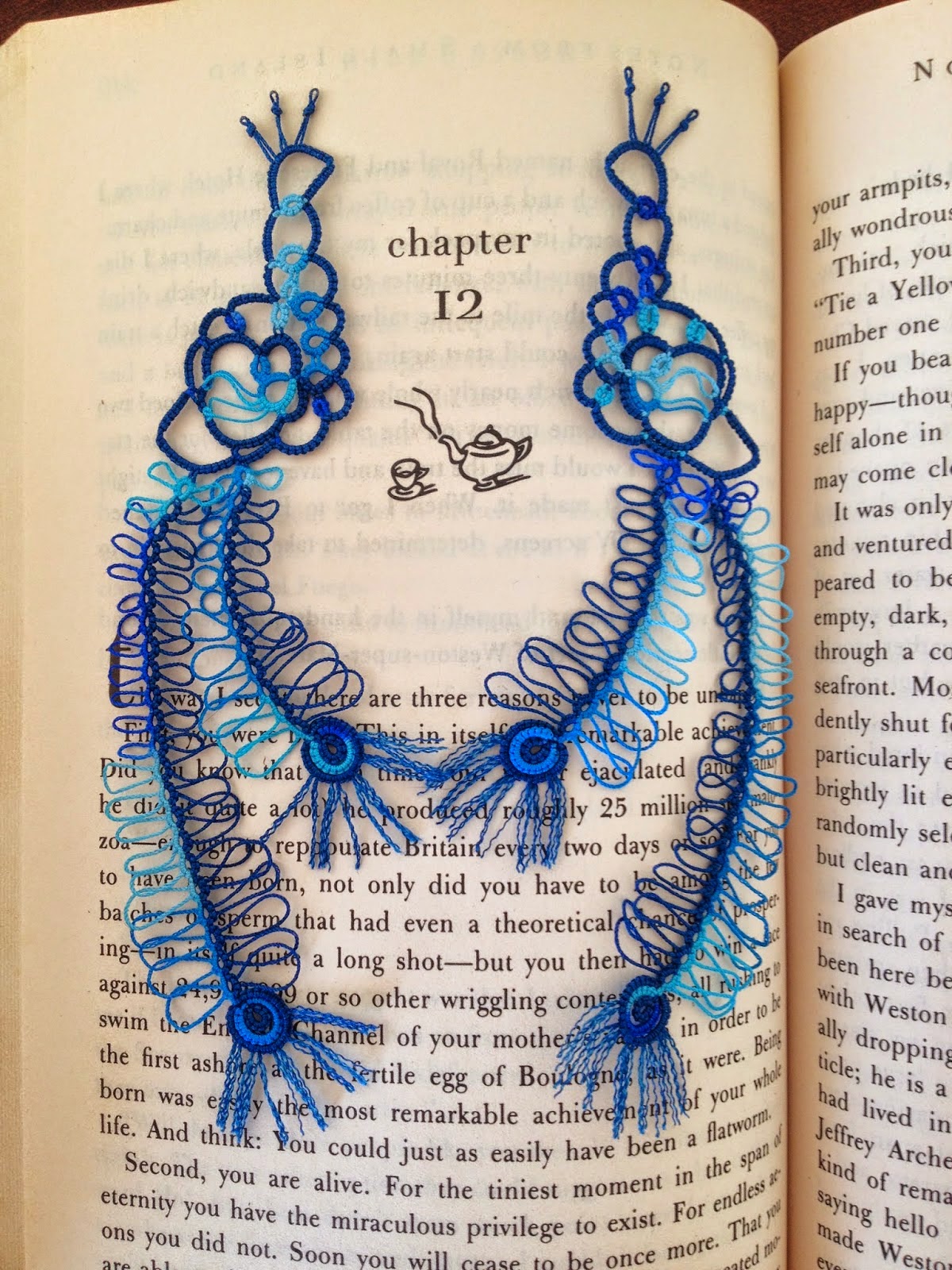 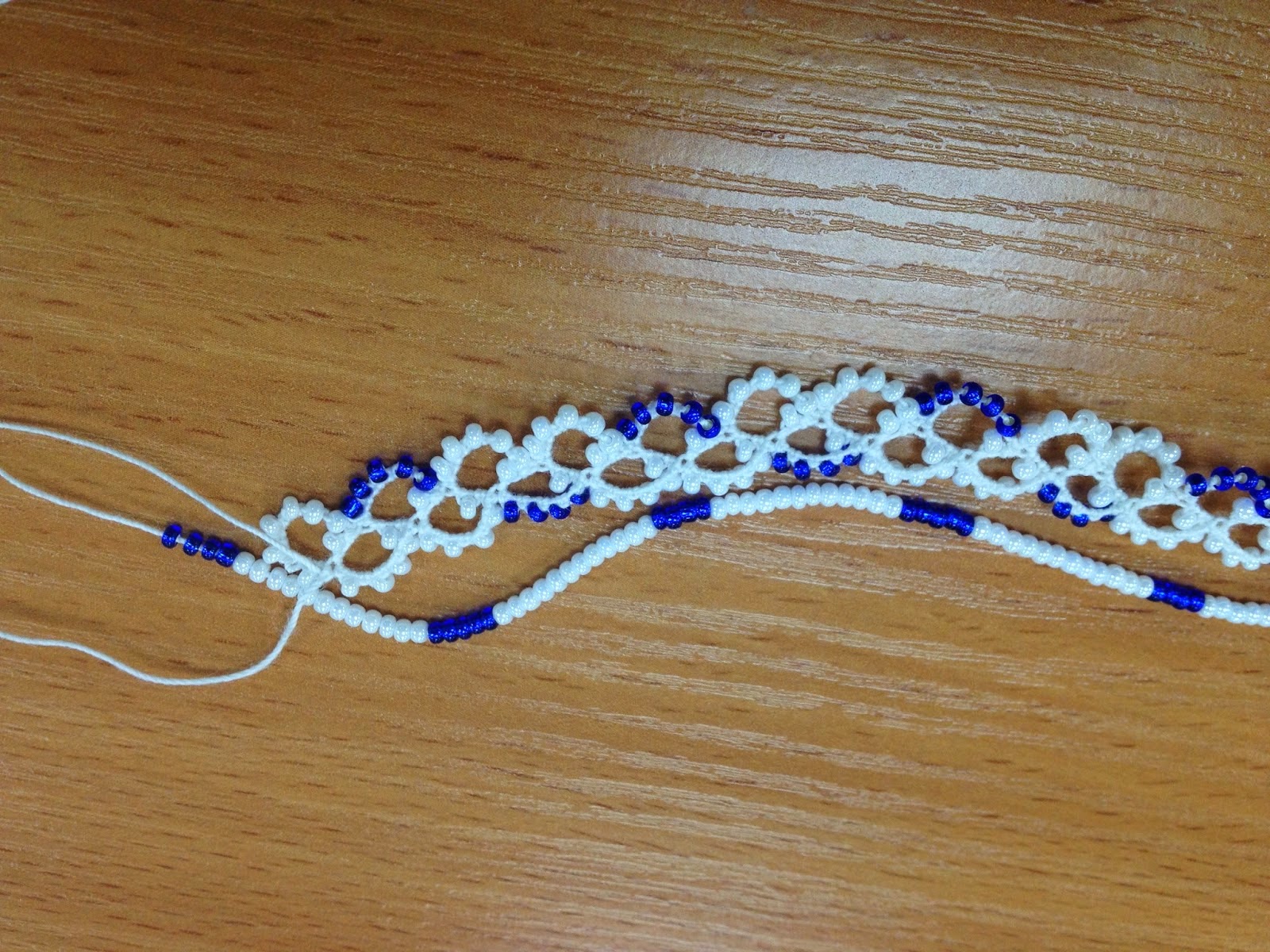 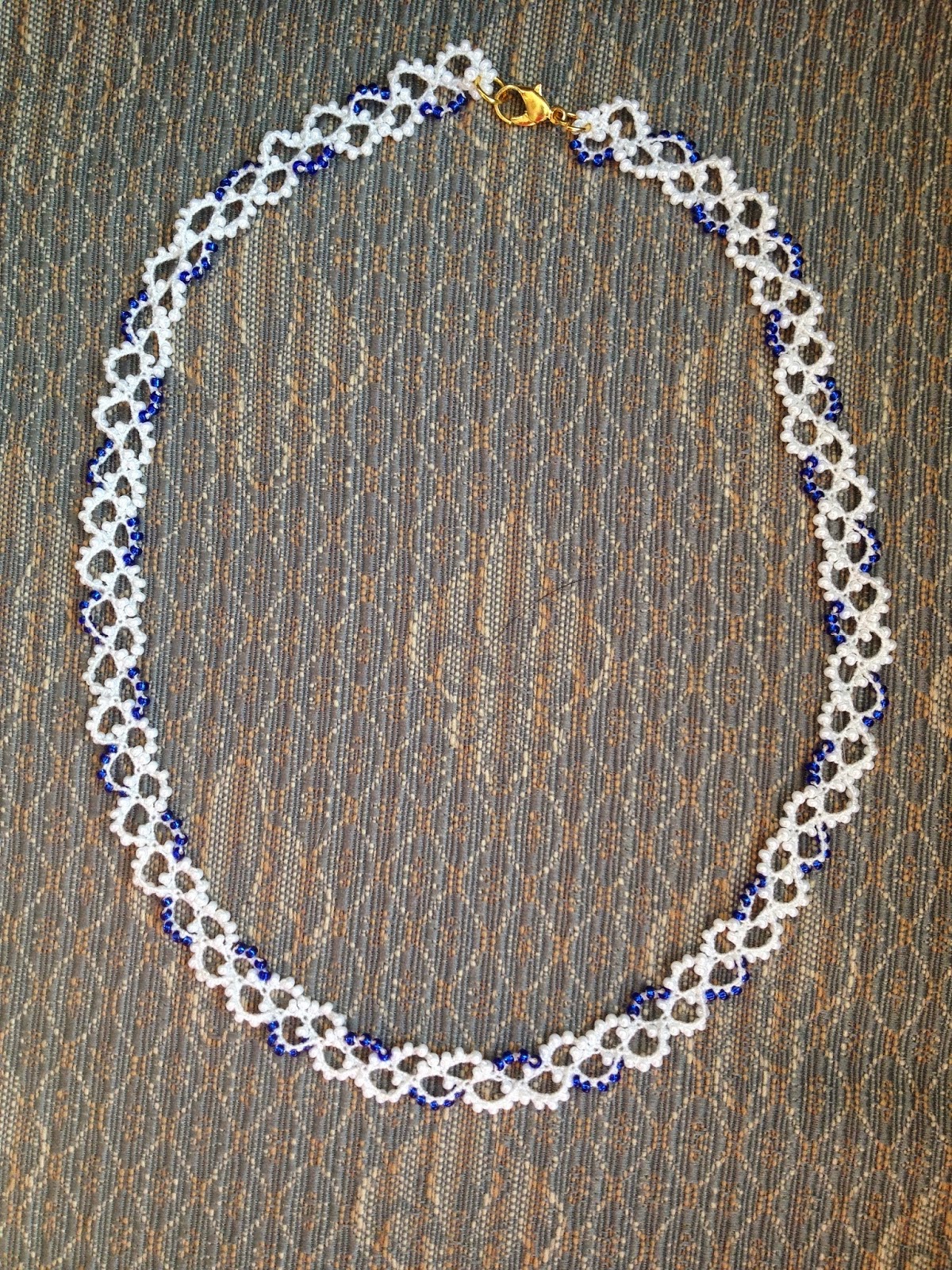 Marie crafted a necklace for her mother, but they needed matching earring. 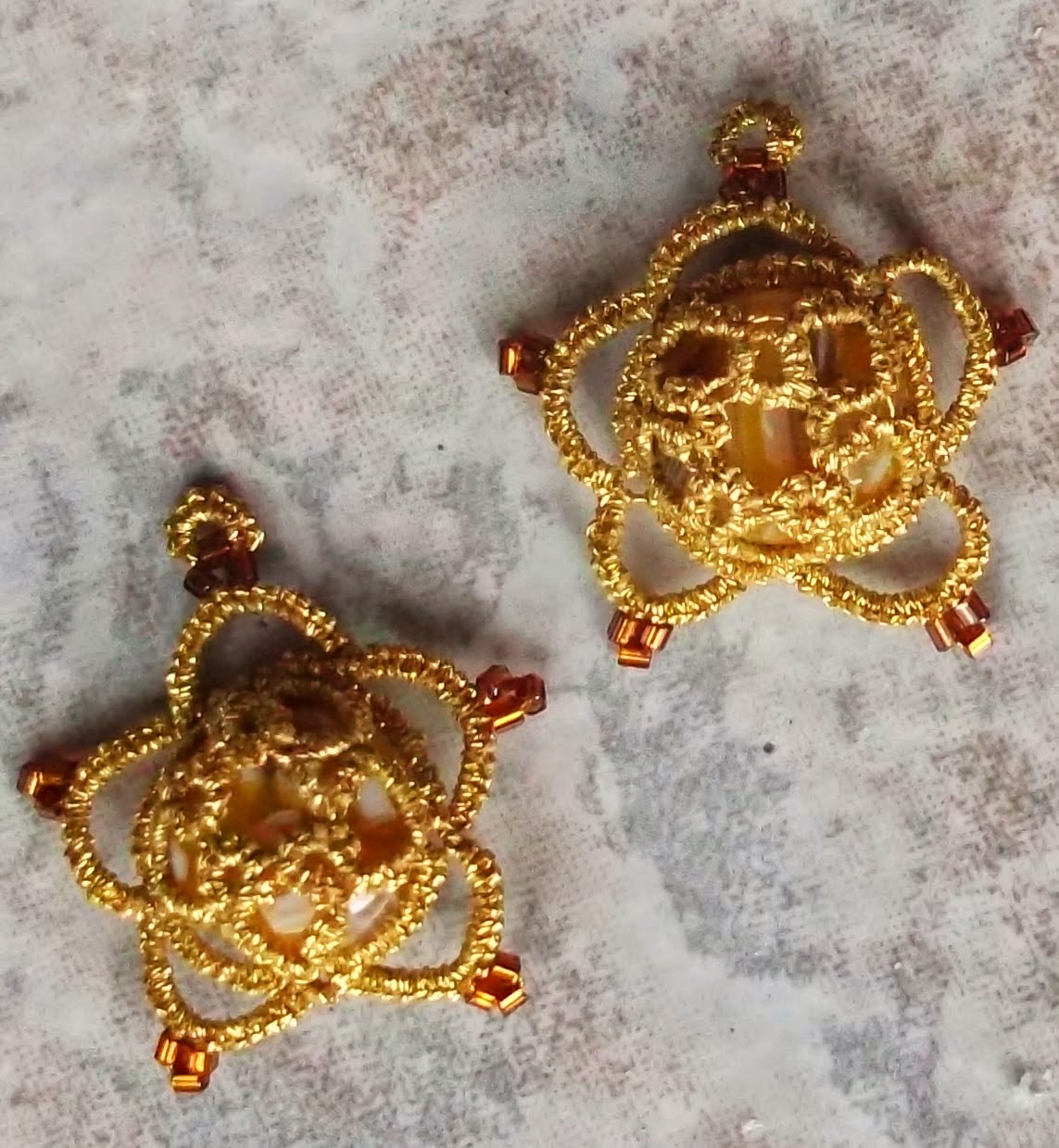 HisKid tatted Mary Konior's Small Cross and Large Cross from Tatting with Visual Patterns in size 40 Lizbeth threads.  The first in Island Breeze, is for a 90 year old in her Sunday night group and the second is in Girly Girl for another lady. The Anything Teapot by Martha Ess, is tatted in size 40 Lizbeth Navy.