Muskaan was intrigued by the interlocking split ring braid the Judith Connors shared on InTatters and she had to give it a try. She shows her process for this technique. 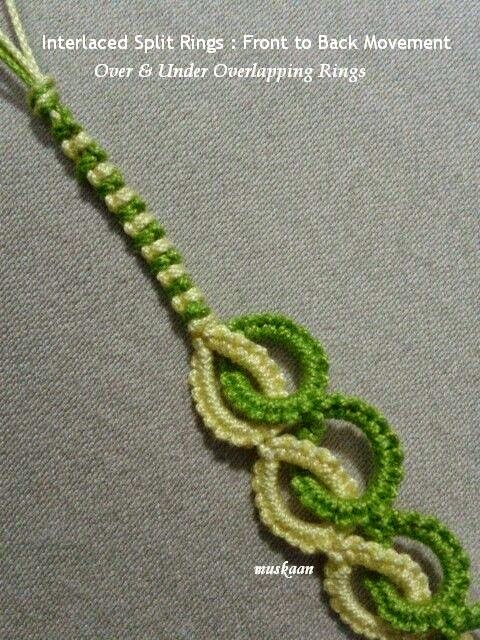 Batty Tatter rescued this little doily from an antique shop and plans to keep it on top of her stereo speaker. 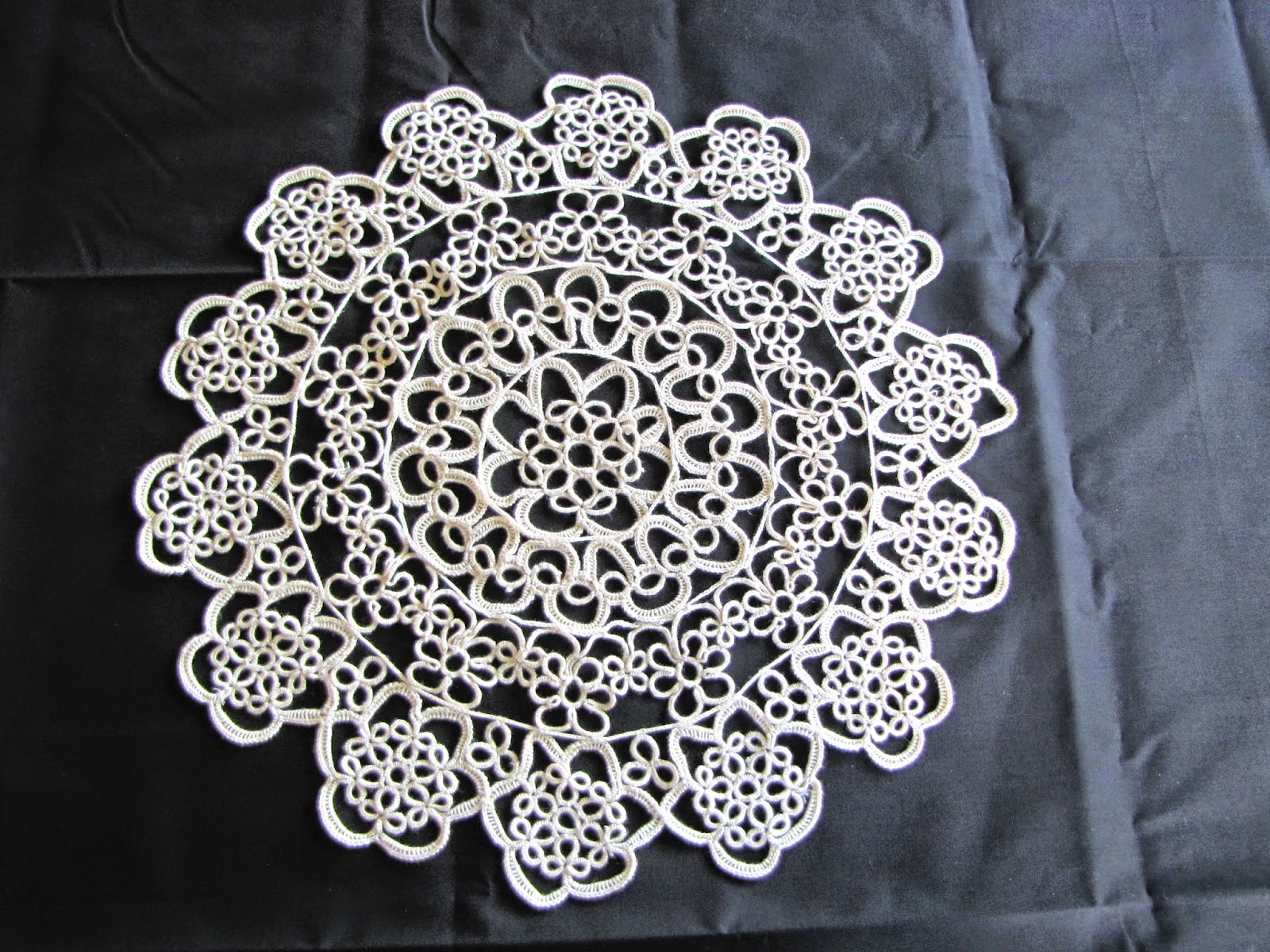 Lilas created a variation of her Ondine bracelet to make this design she calls Oceane, made with the cordonnet thread DMC 40 white, small pearls and a magnetized closure. In answer to some construction questions she has posted instructions on how to create the earring pattern on the free-tatting site. 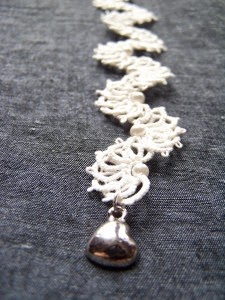 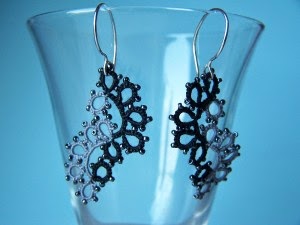 Sue was tatting away and then realized that she hadn't been reading the pattern, undid what she had just tatted, started again and tatted up past the same point, only to realize she'd done the same thing again and cut it off. She has started again on this little bit sticking out at the bottom of the hat. Why is it time consuming mistakes on large projects always seem to be so much bigger? 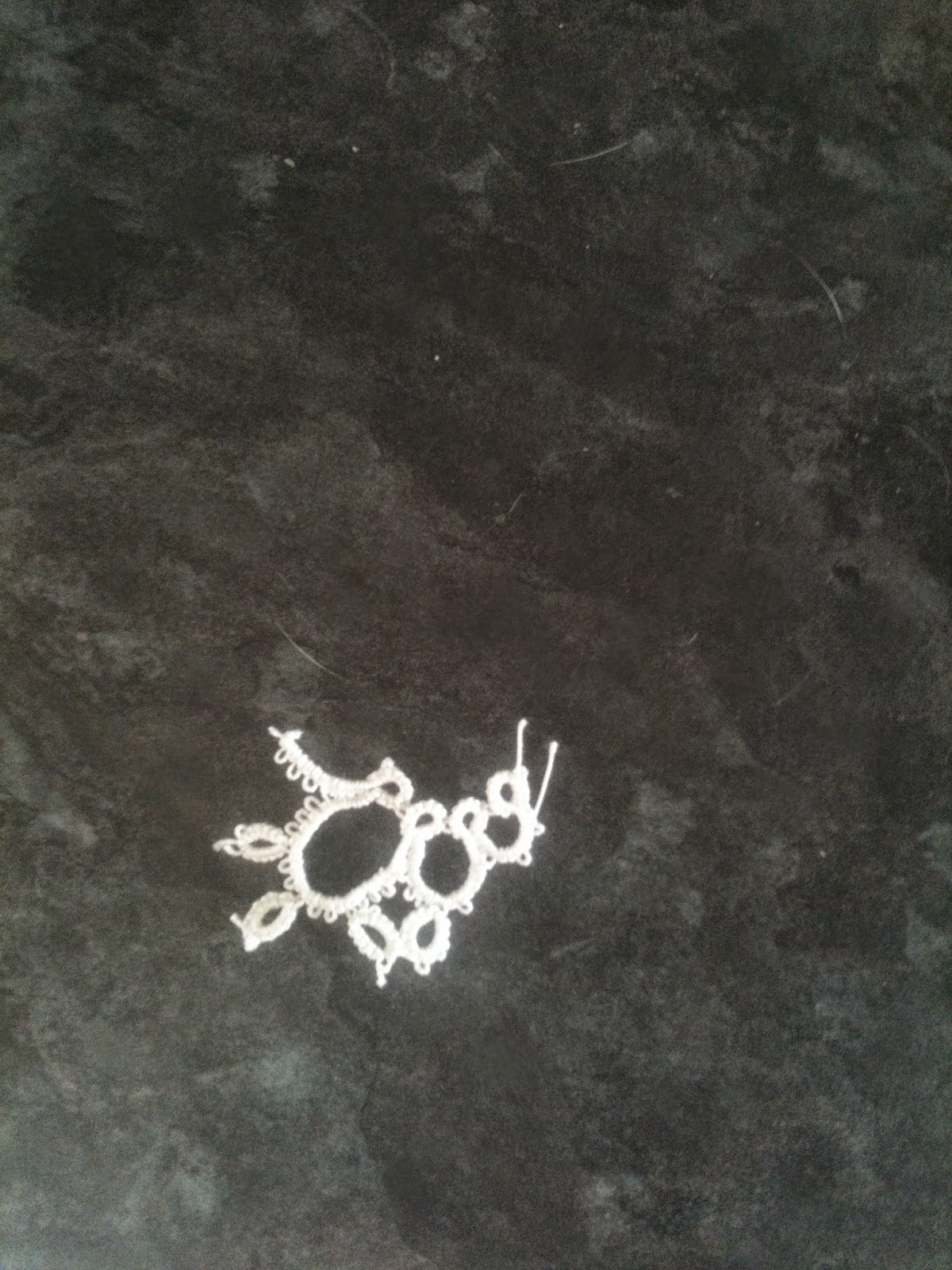 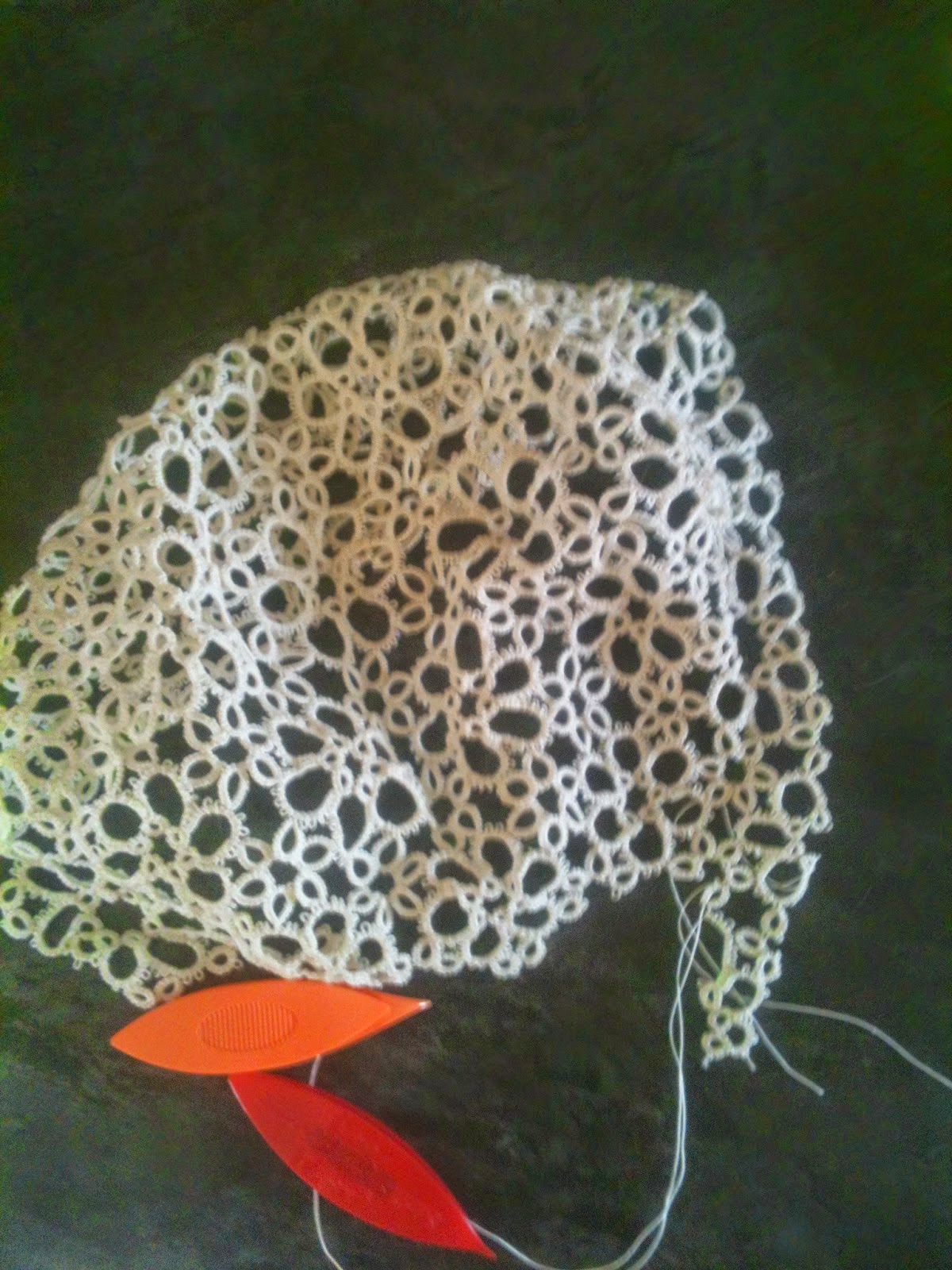 Phyllis finished a couple of half done projects. The berry earrings are from Tat Days 2012 called Fancy Chandelier by Anitra Stone done in her own HDT. The black ones are from Tat Days 2013 called Nowhere Maze by Victoria Clarke done in Lizbeth black. The shuttle tag has been on her to do list for a while and she finally dyed some thread based on a couple of monsters she has seen. The earring-pendant set is from a pattern by Elaine P Gan called Heart 2 Heart that she tatted using iridescent embroidery floss, 3 strands for the pendant and 2 for the earrings. 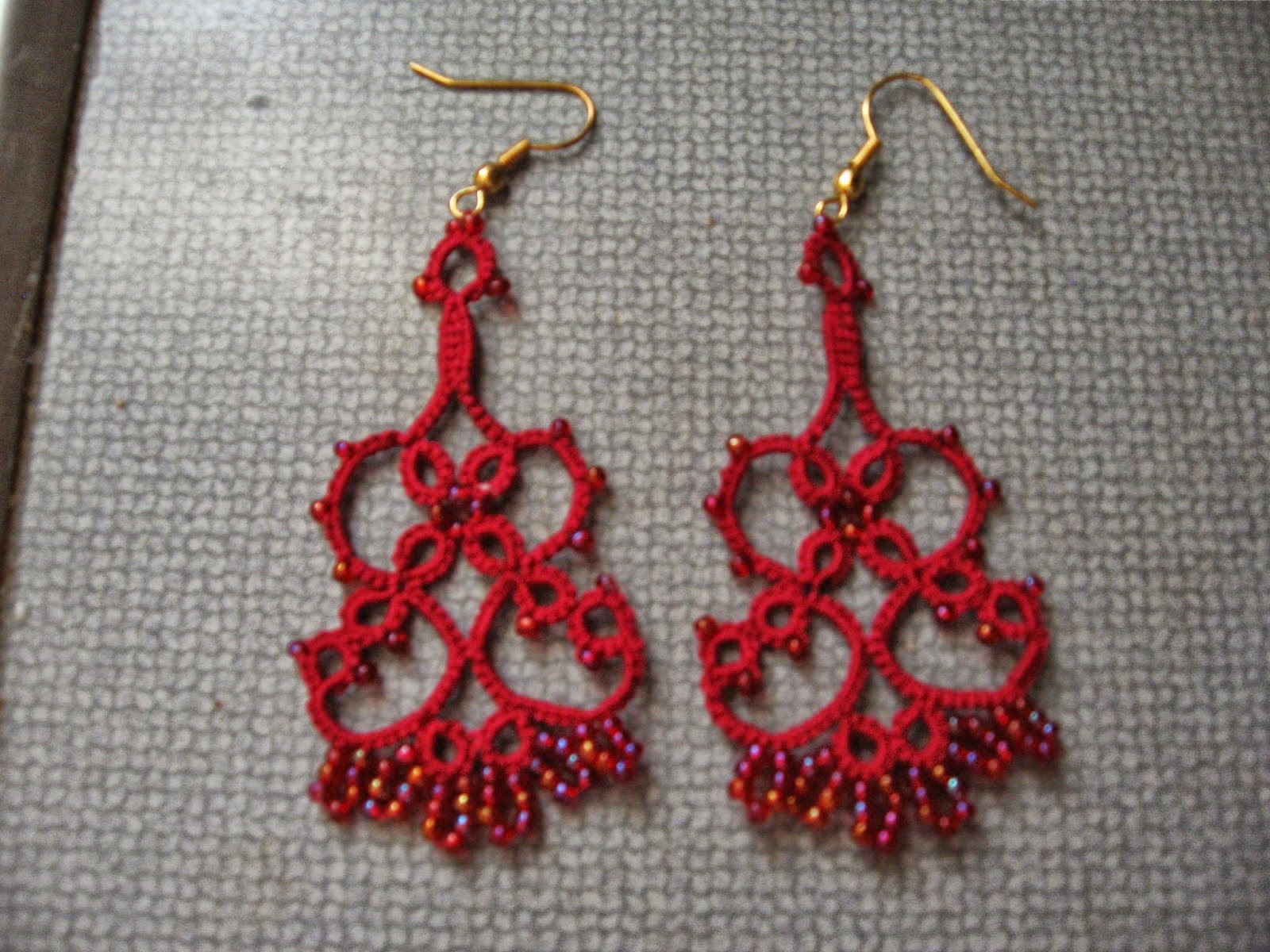 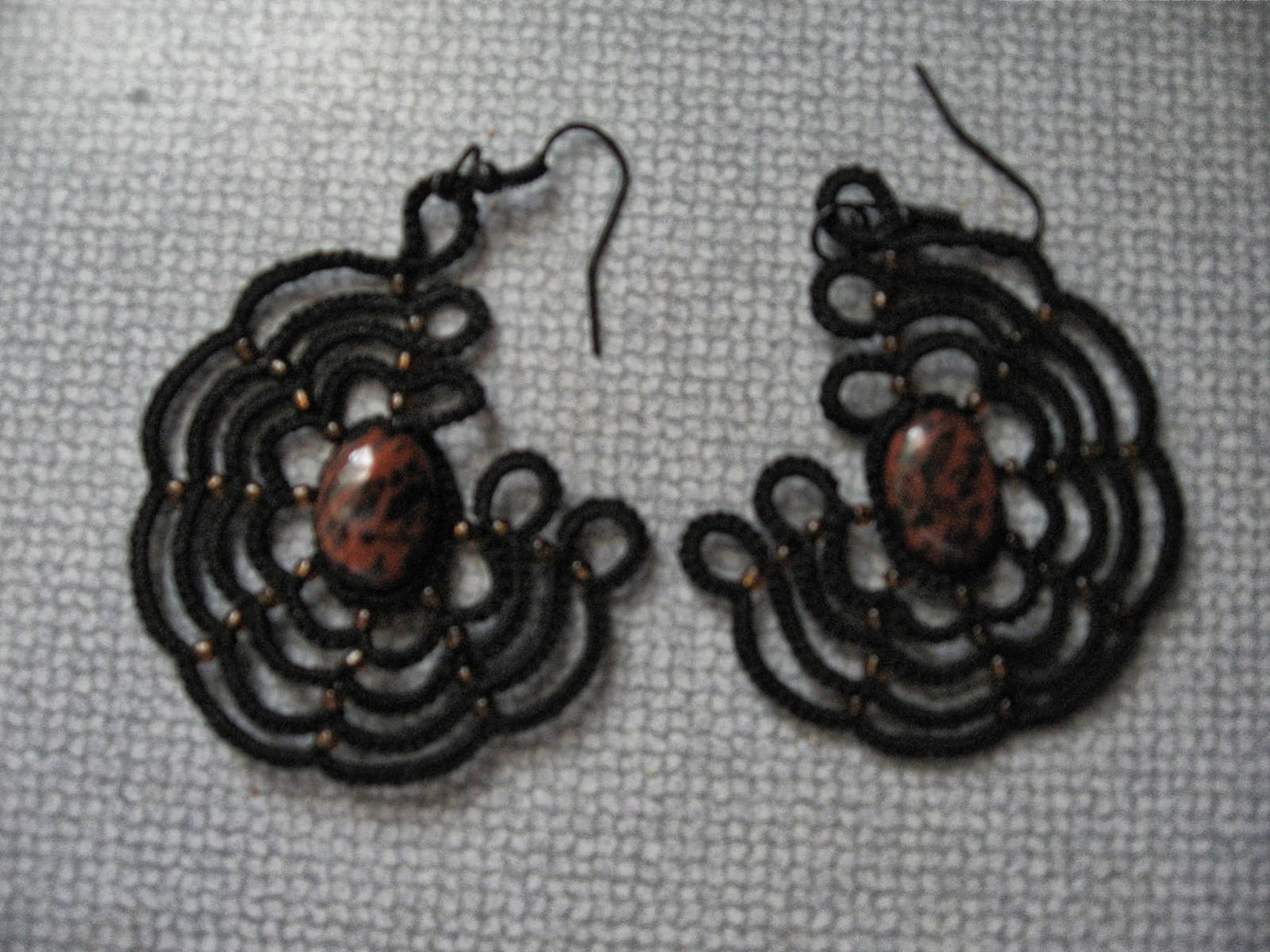 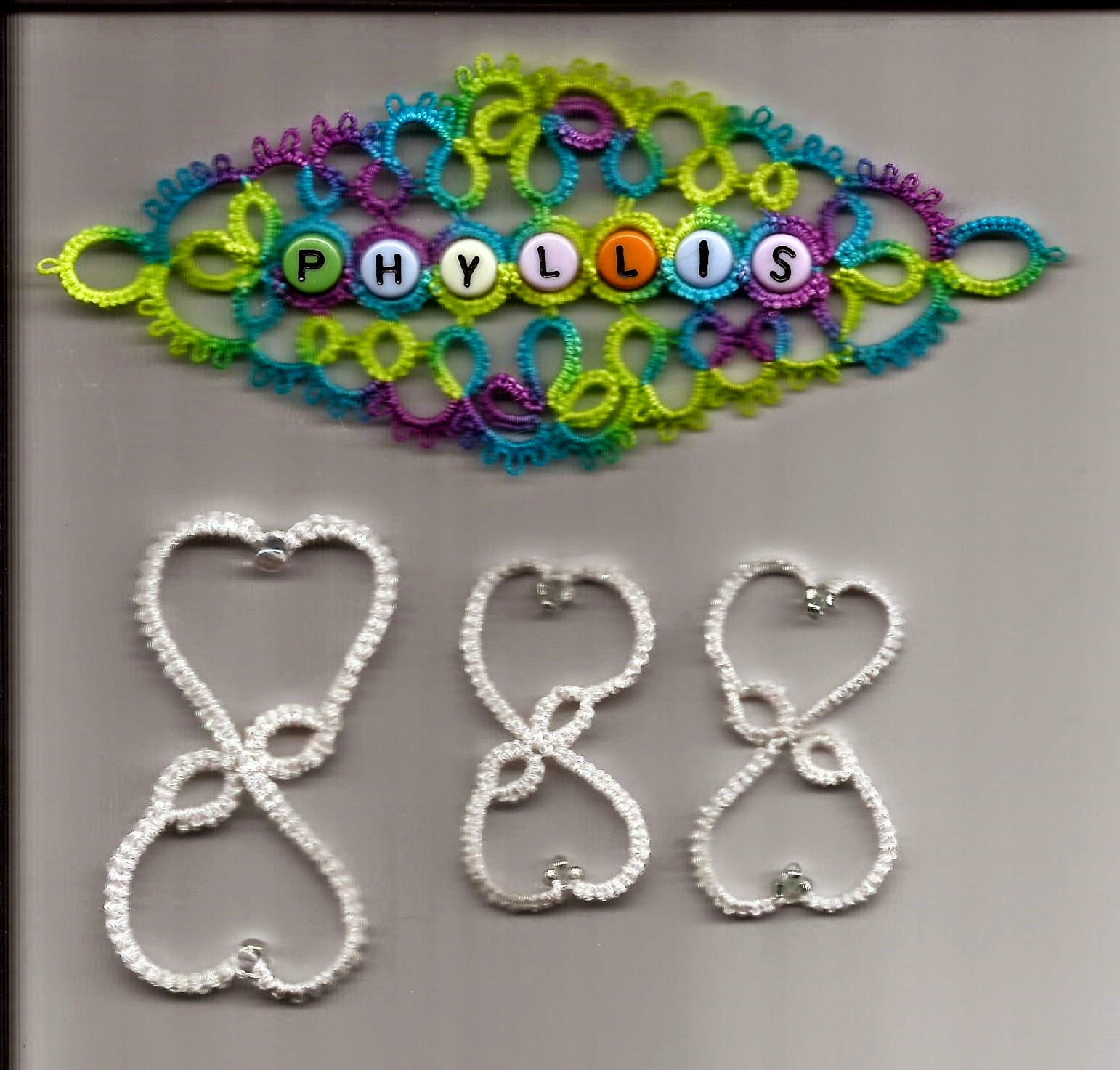 Cigdem modified and earlier design to create the very dramatic Opera Night necklace and earring set in Lizbeth size 10 in black cordonnet, cube square crystal glass beads. The matching bracelet is still on the drawing board. 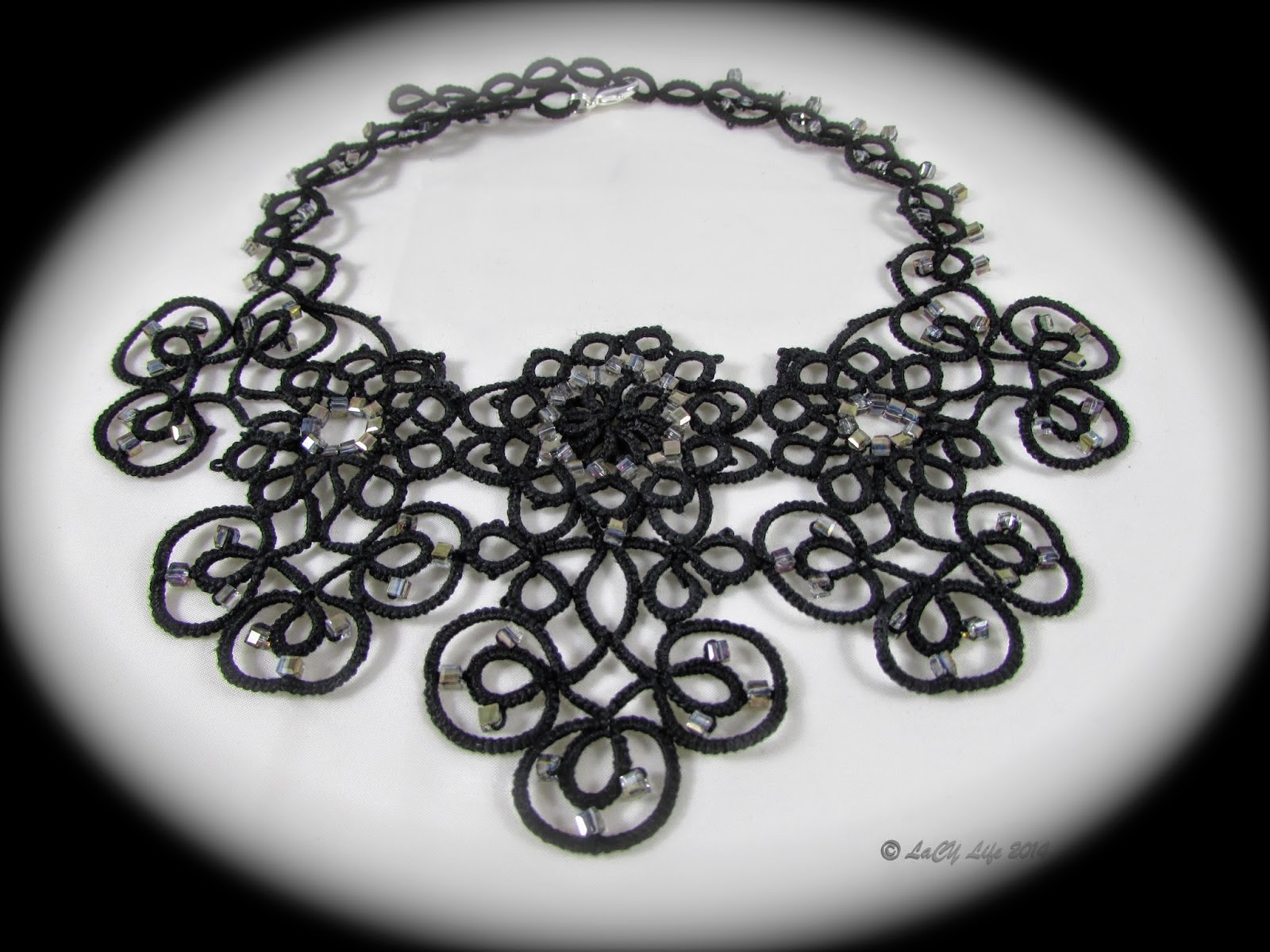 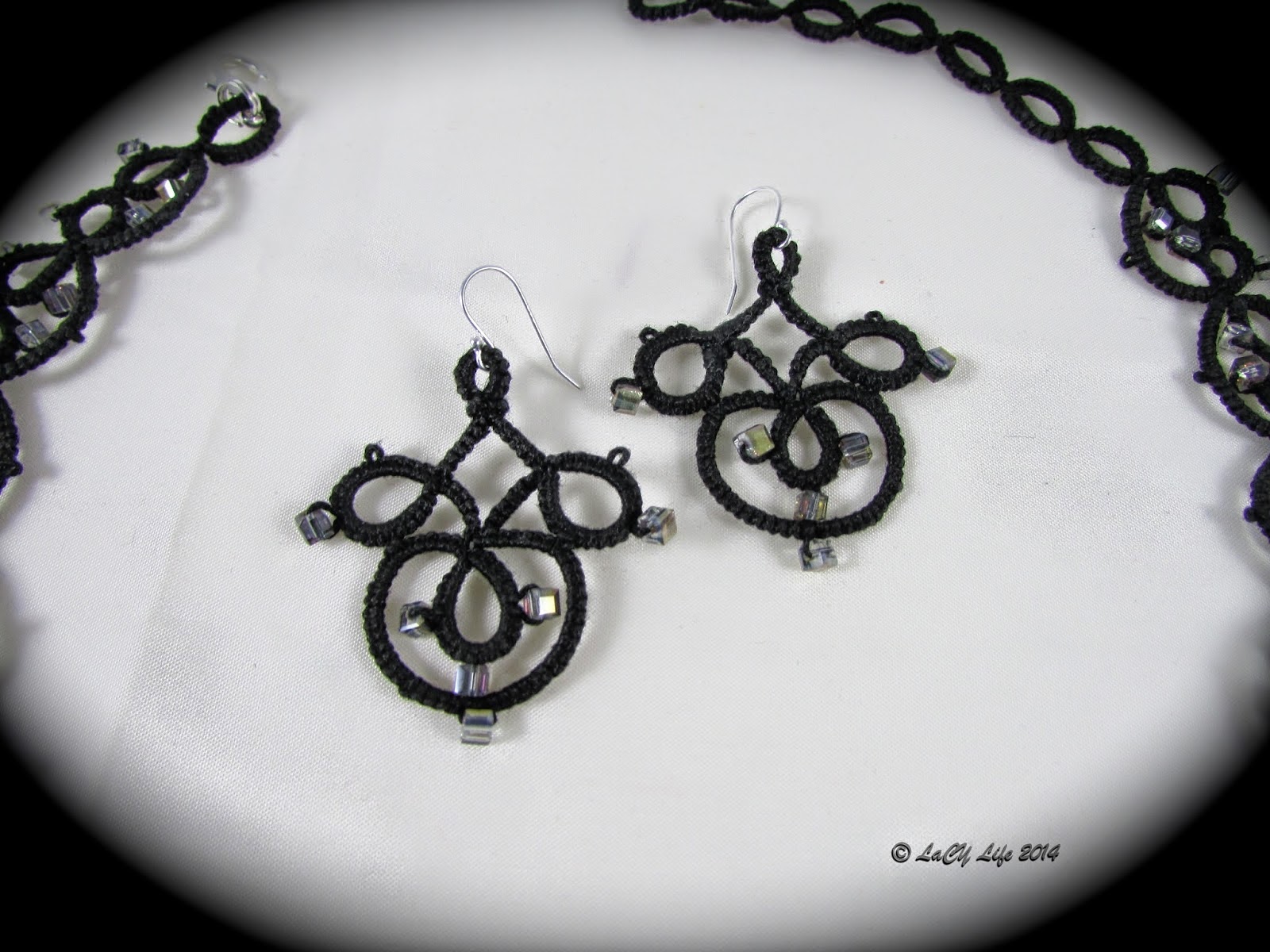 mb duke selected a black t-shirt as a background for the tatted cat and it really makes the colours pop. She loves this pattern from Lene Bjorn's Tatted Bookmarks - Cross Shaped which she did in Altin Basik, color 366, size 50, but it feels more like size 20 or 30. The second one is done in vintage Coats and Clark size 70. The difference in size is obvious when they are seen side by side. 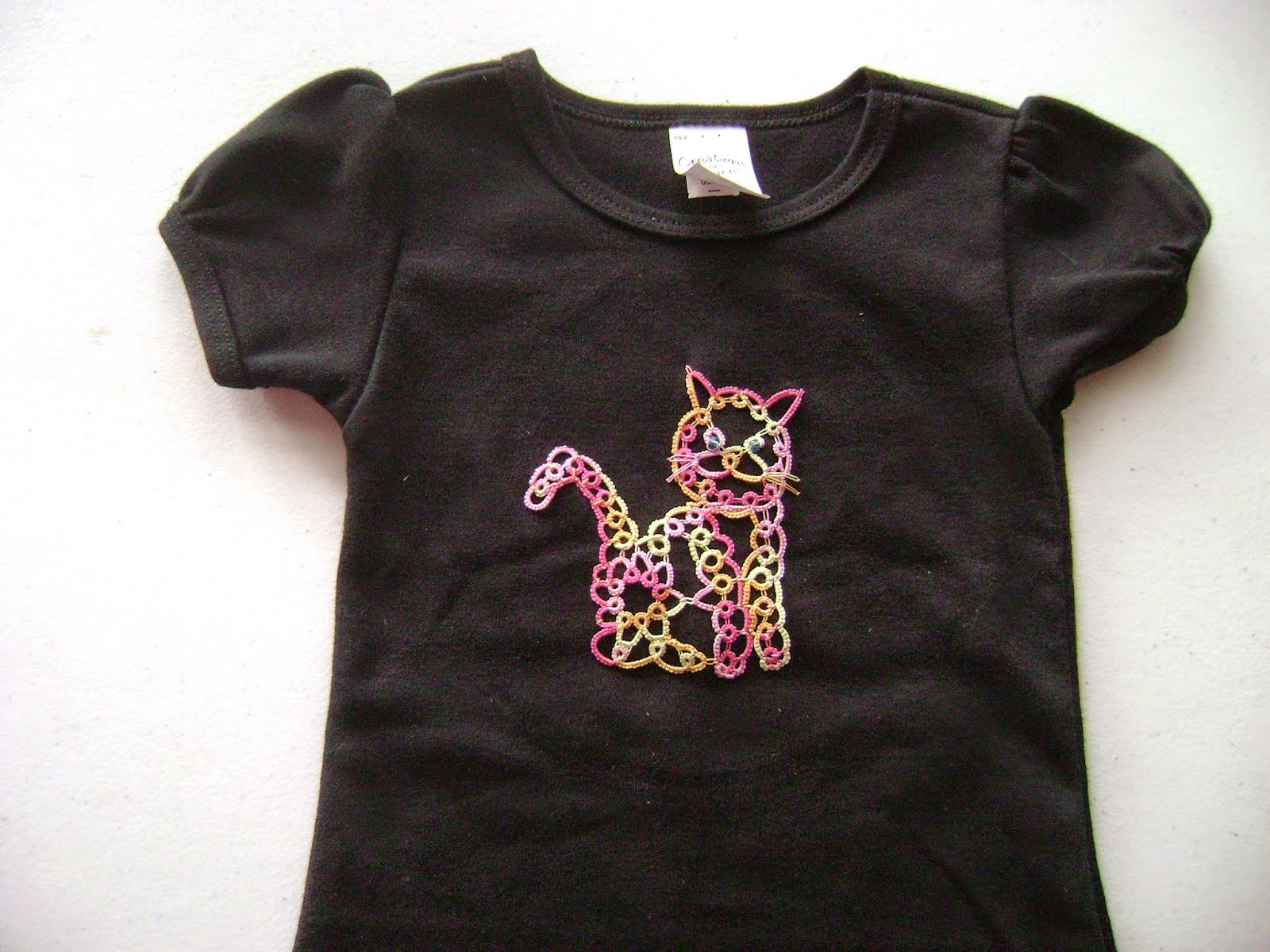 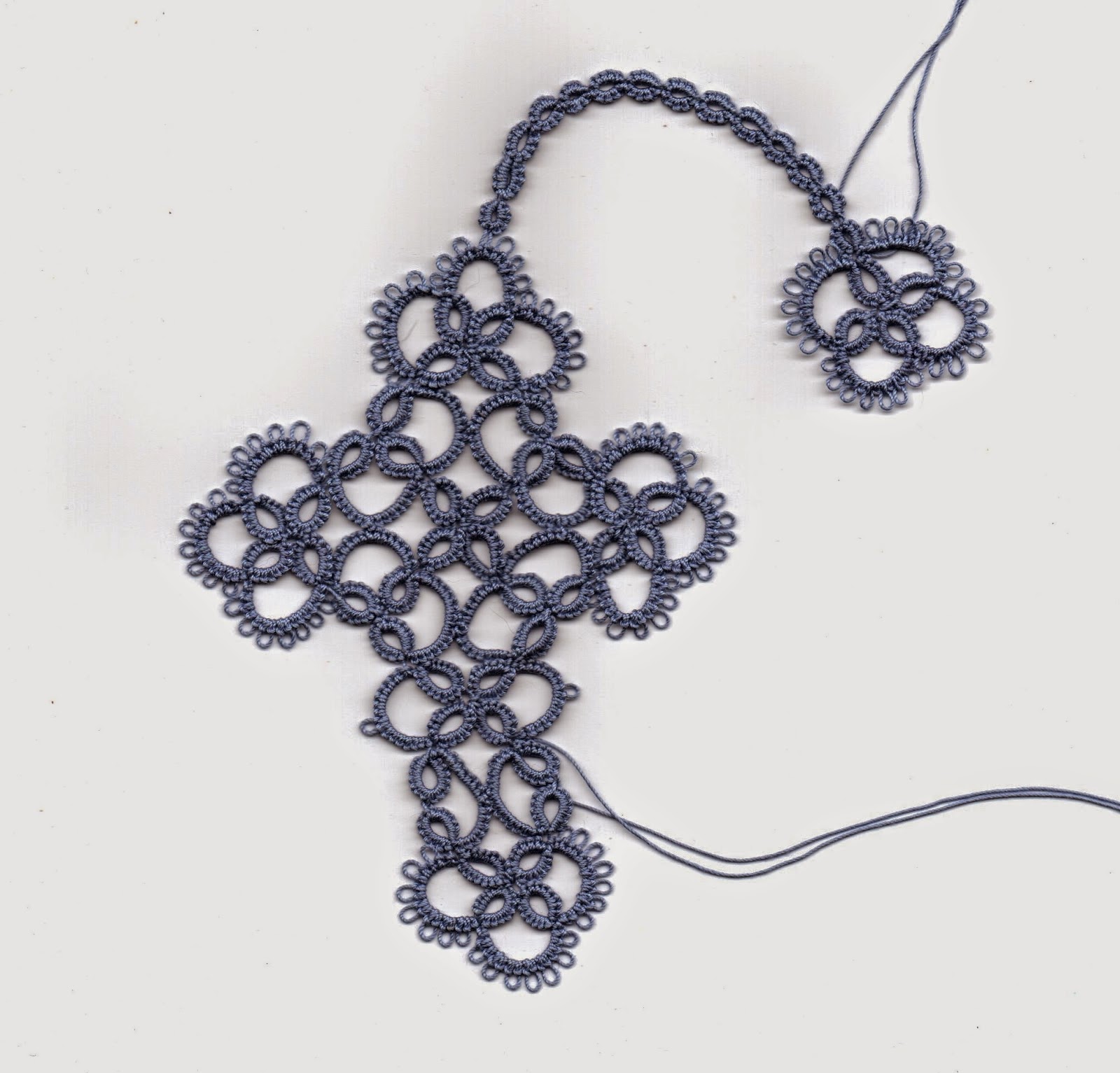 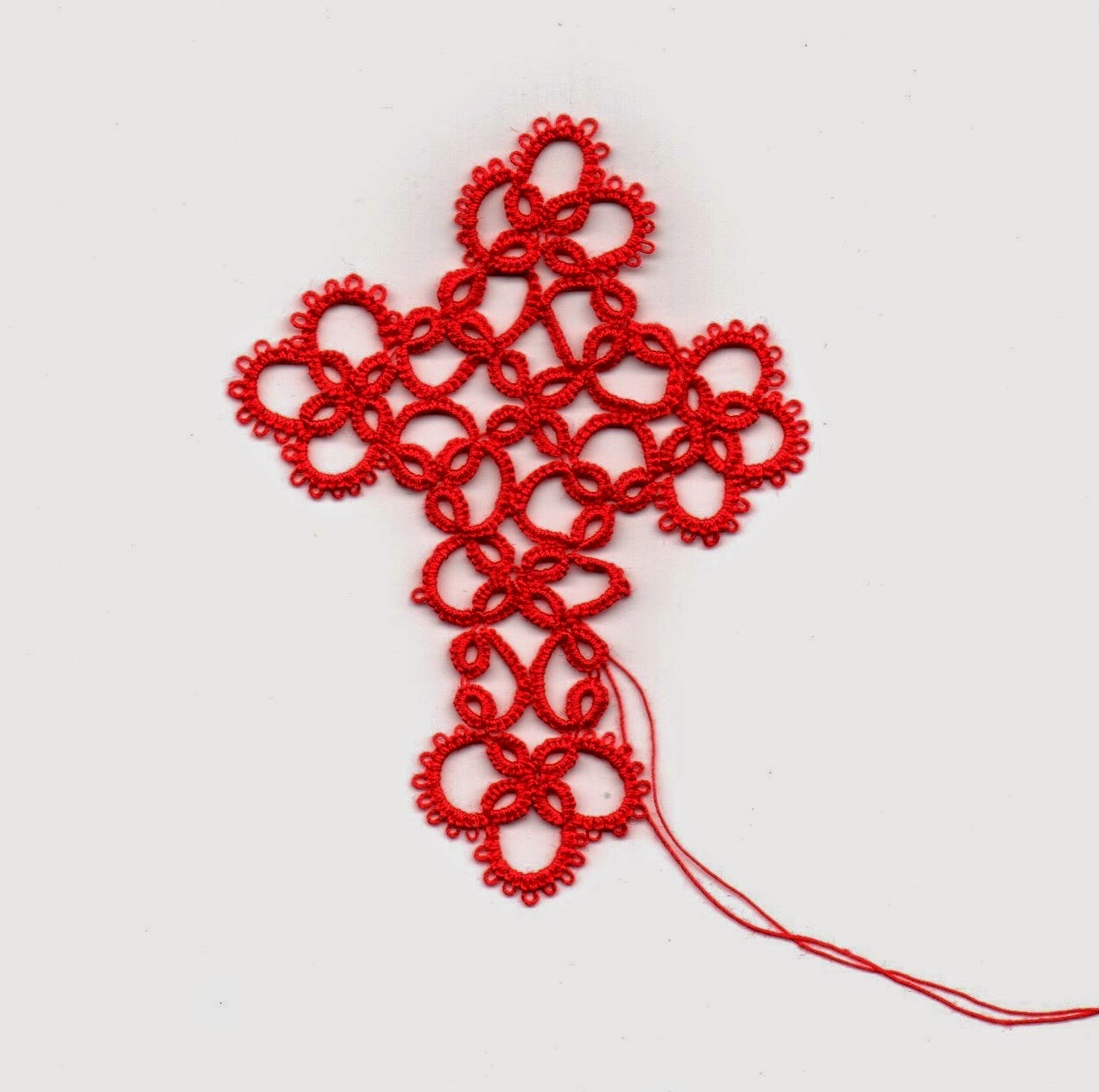 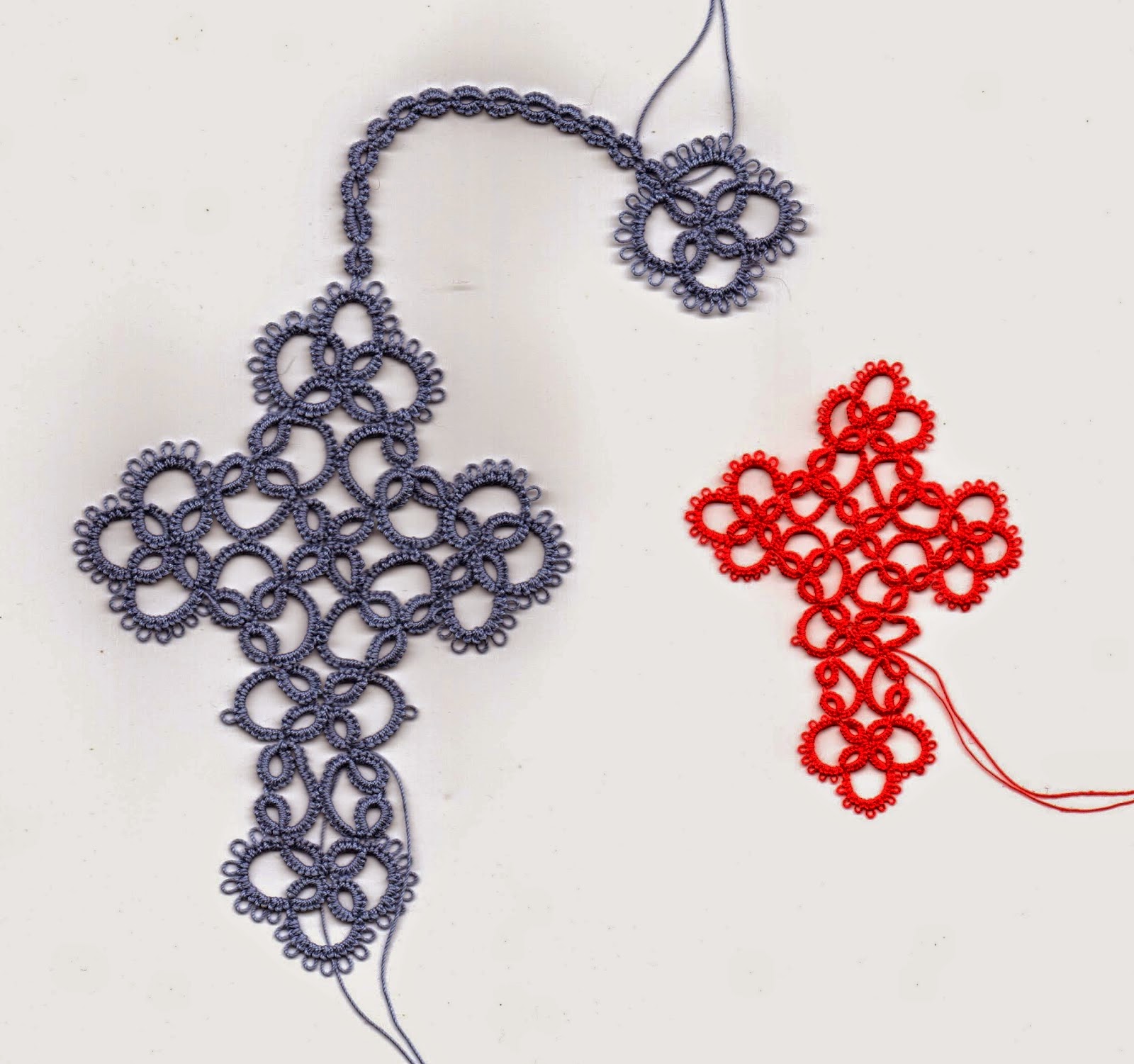 Jessica is taking these earrings, among other things, to a shop in Issaquah to put on consignment as a trial run to see how it goes. 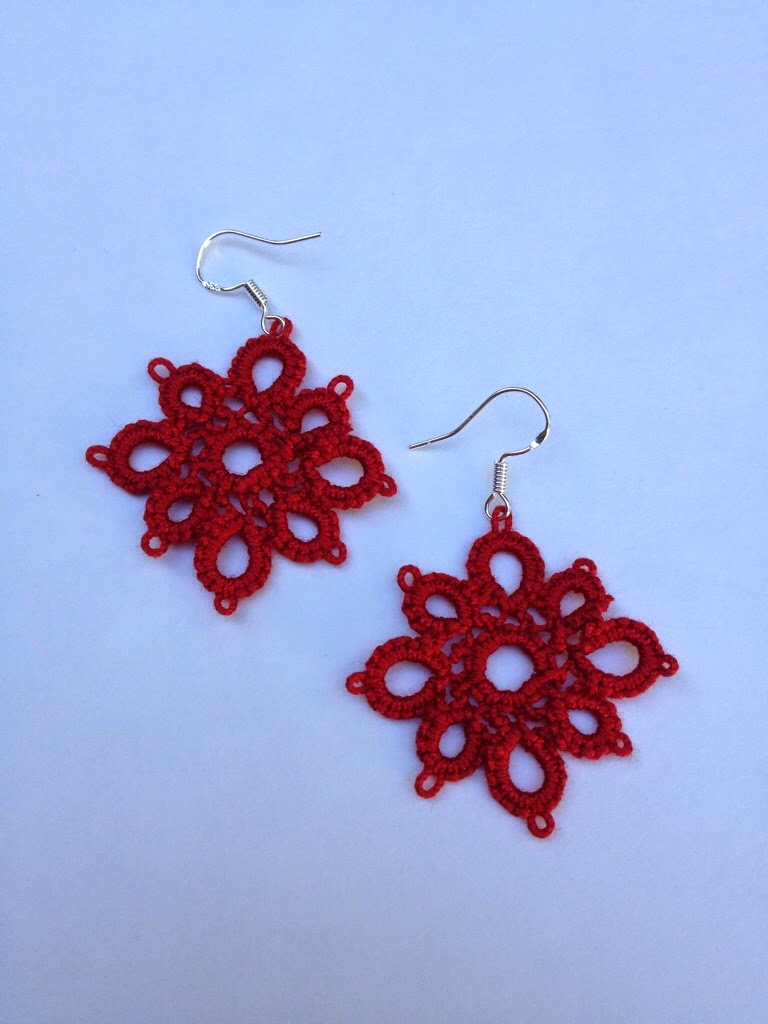 Ancolie tatted this design from Tomoko Morimoto as her 7th motif for the 25 Motifs Challenge. The little doily is tatted with Lizbeth Thread 184 :Rainbow Splash. 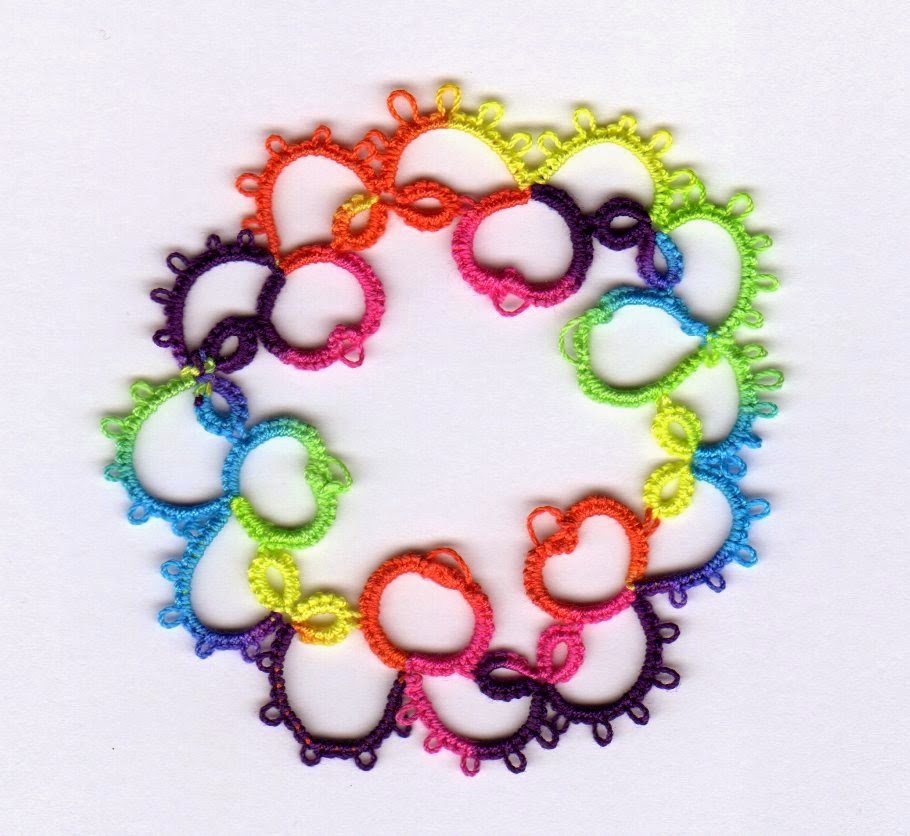 Diane finished Round 8 of Renulek's Letnia. She even managed to start Round 9. While her students tatted she managed 5 more repeats on Round 9. 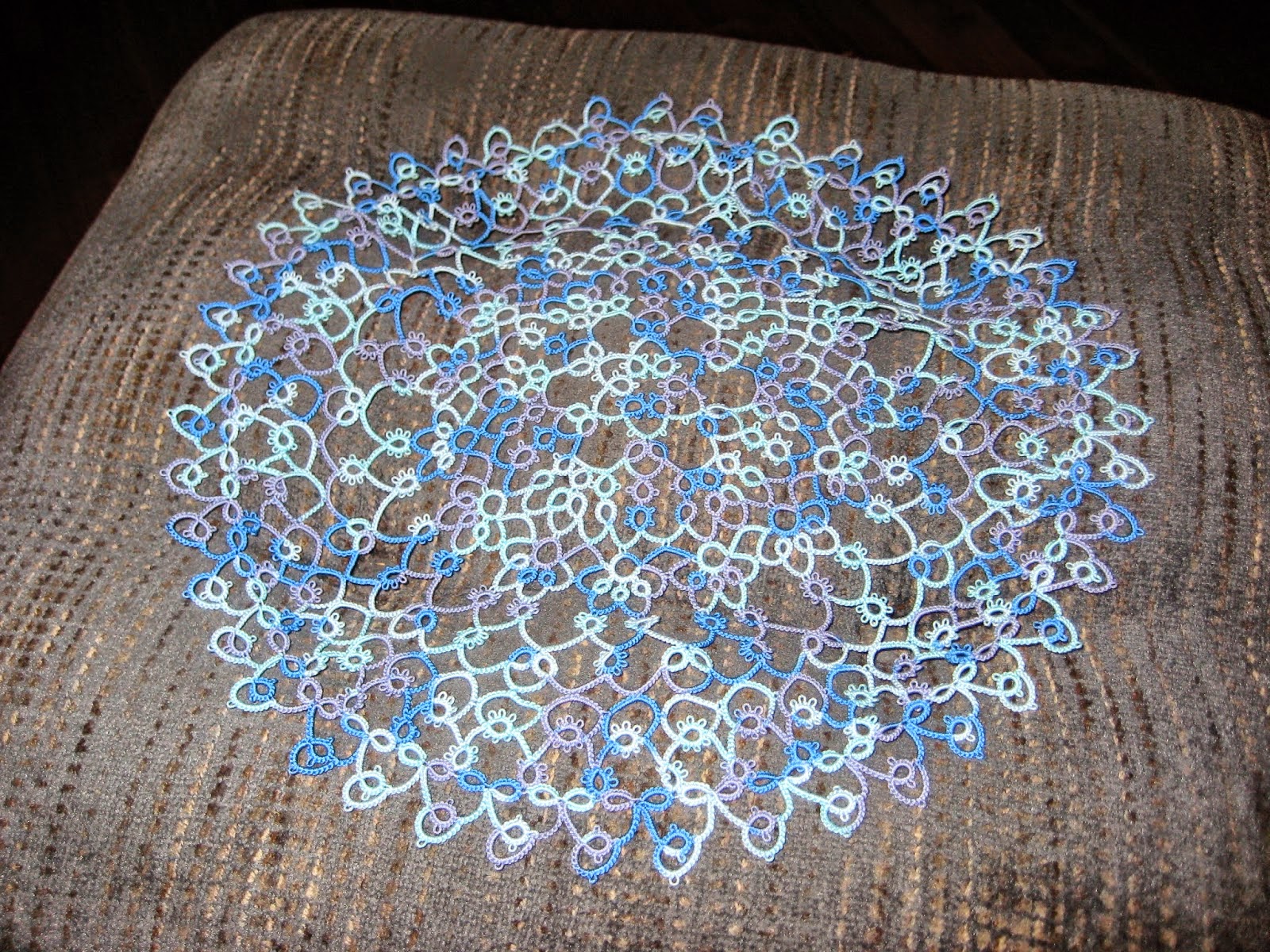 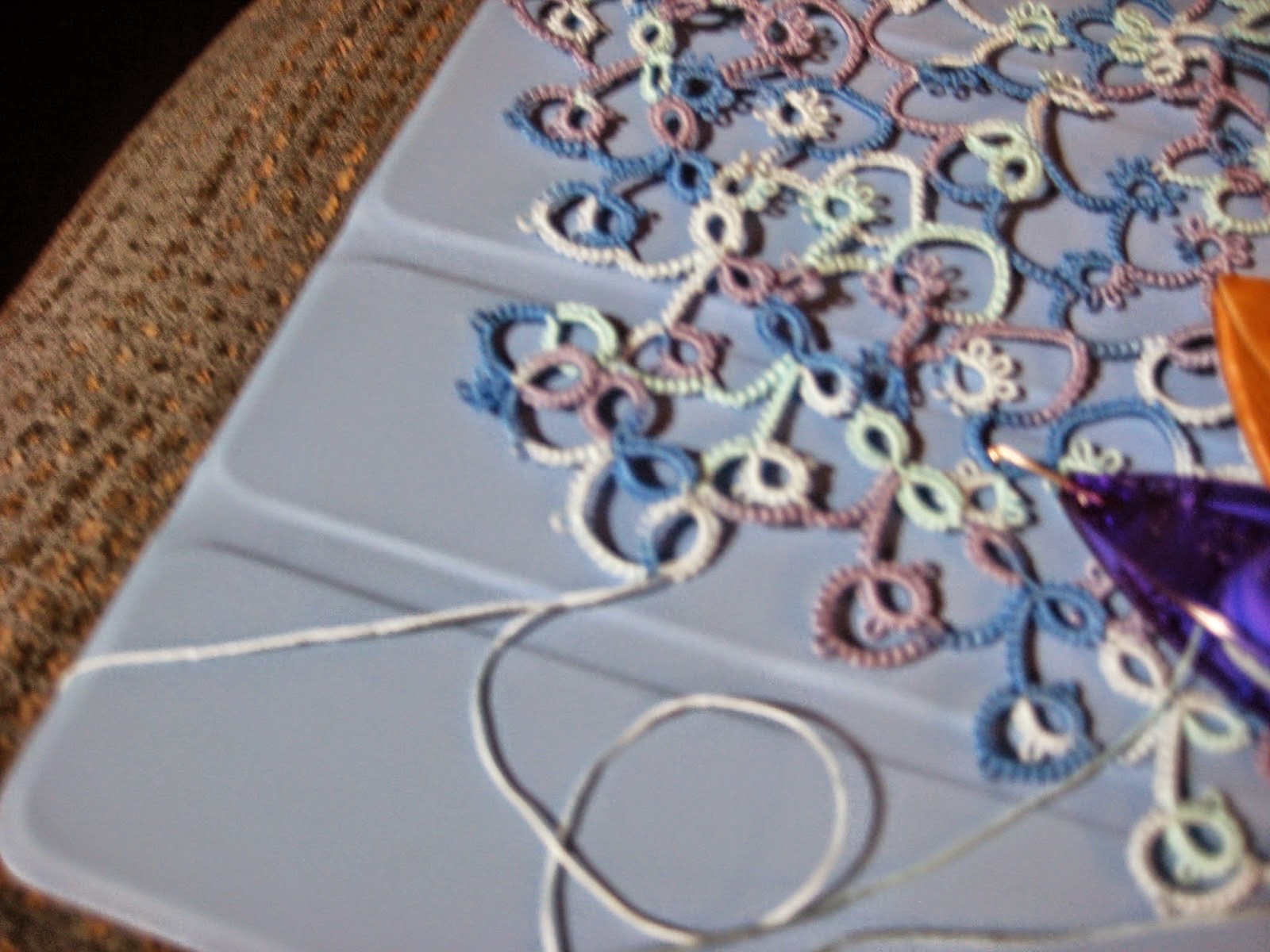 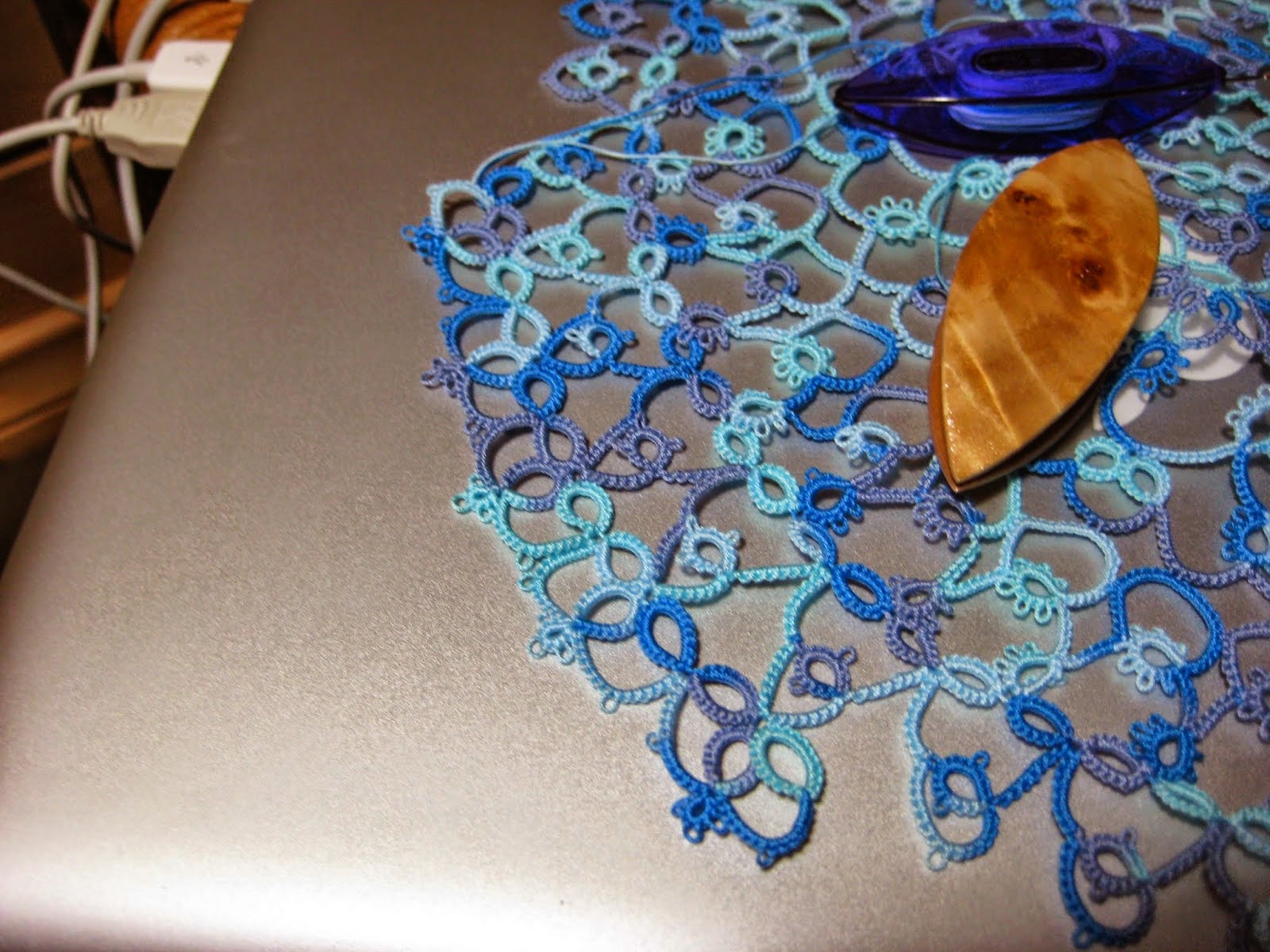 Fox bought this hanky in NYC and decided to tat a Mary Konior edging around it size 40 blue seems perfect. She's also working on a project using also working on this with Karey Solomon's HDT and she needed a size 40 to match with it, but she doesn't have a lot of this colour and hopes it will be enough. She finished this Jan Stawasz pattern tatted in #80 Yarnplayer HDT. She also did Brabant by Adelheid Dangela from Occhi Patchwork. She is trying not to run out of Karey's HDT thread while tatting The Oval Doily in Ecru by Linda Davies. Another Brabant by Adelheid Dangala shows her dedication to perfection when compared with her earlier version. Instead of using dds she tatted 2 first-half ds, followed by two second-half ds instead, and shortened the stitch count. 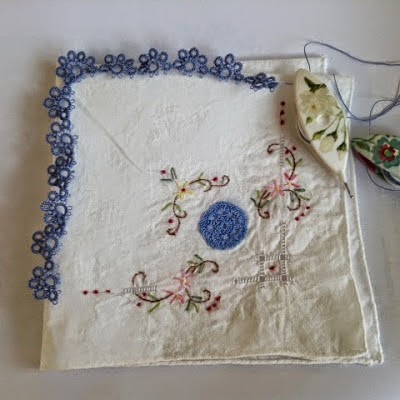 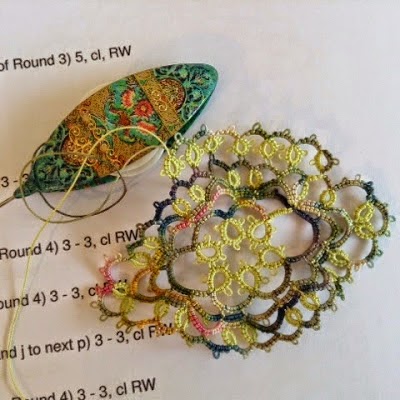 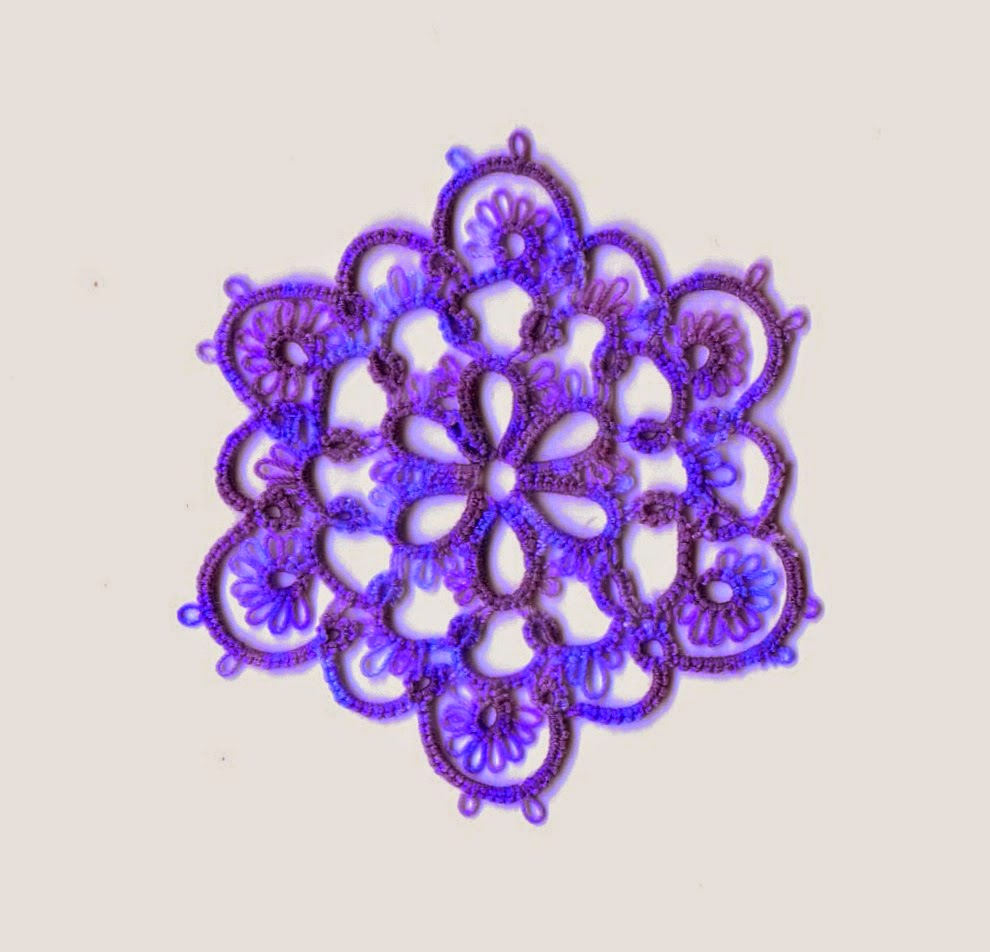 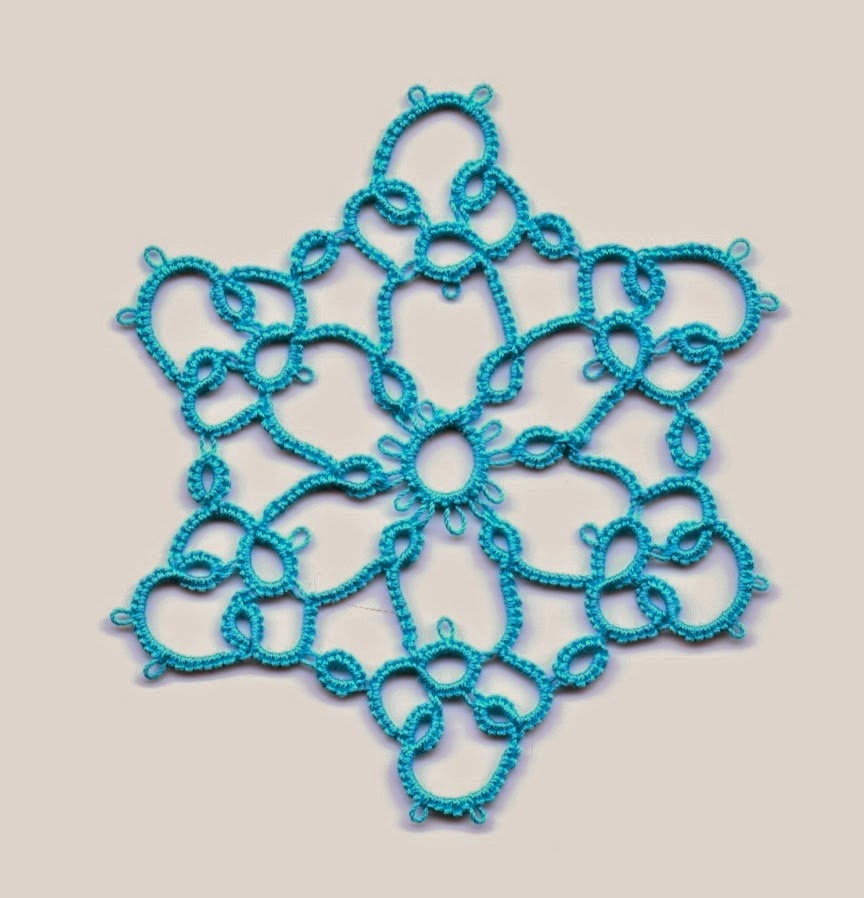 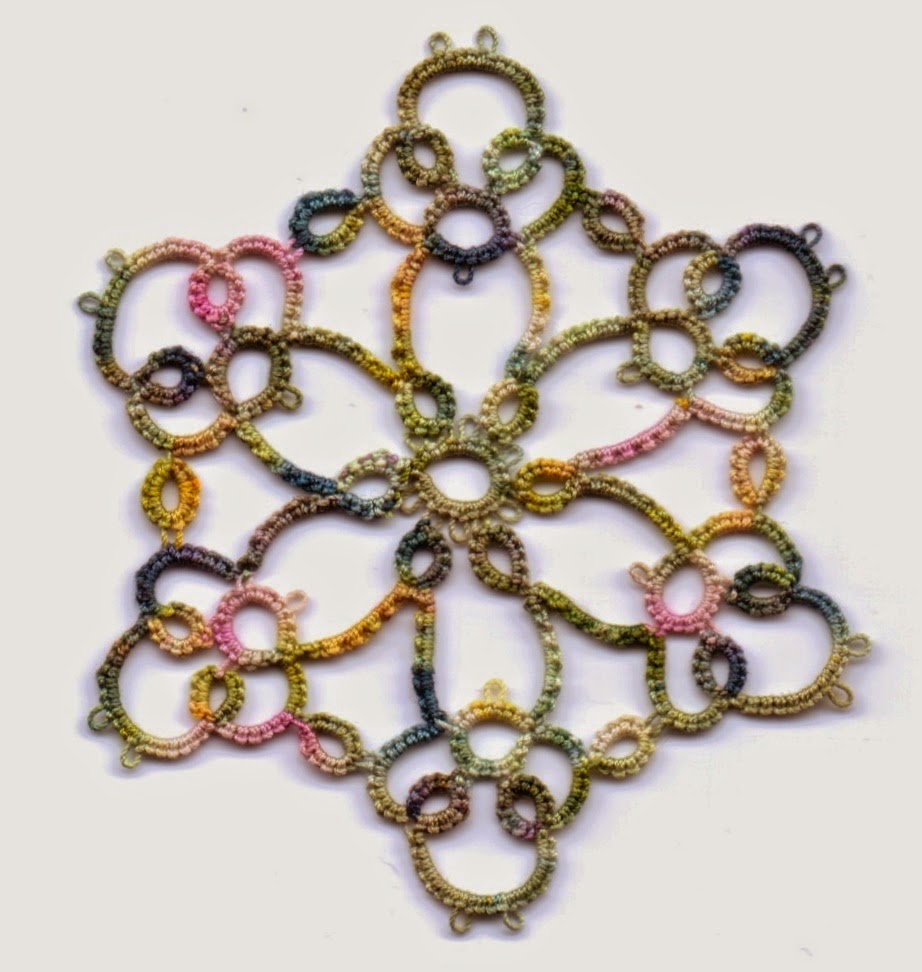 Marie was asked to make a necklace to match with a pendant she had for sale. The pendant was a perfect match for a ring and the customer wanted them all to match. Two strands of Sulky, metallic, purple/teal sewing thread were used to create this pendant. 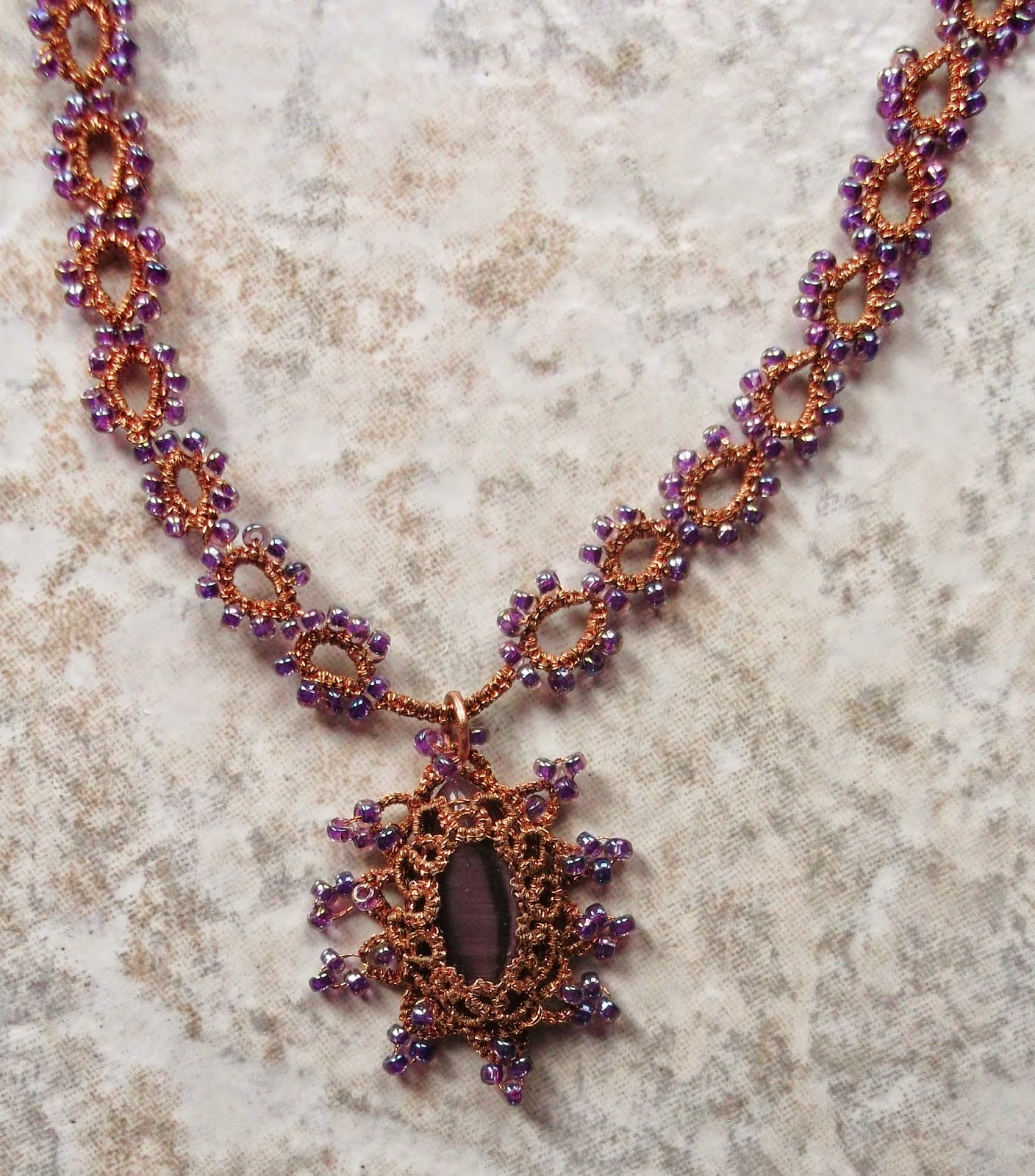 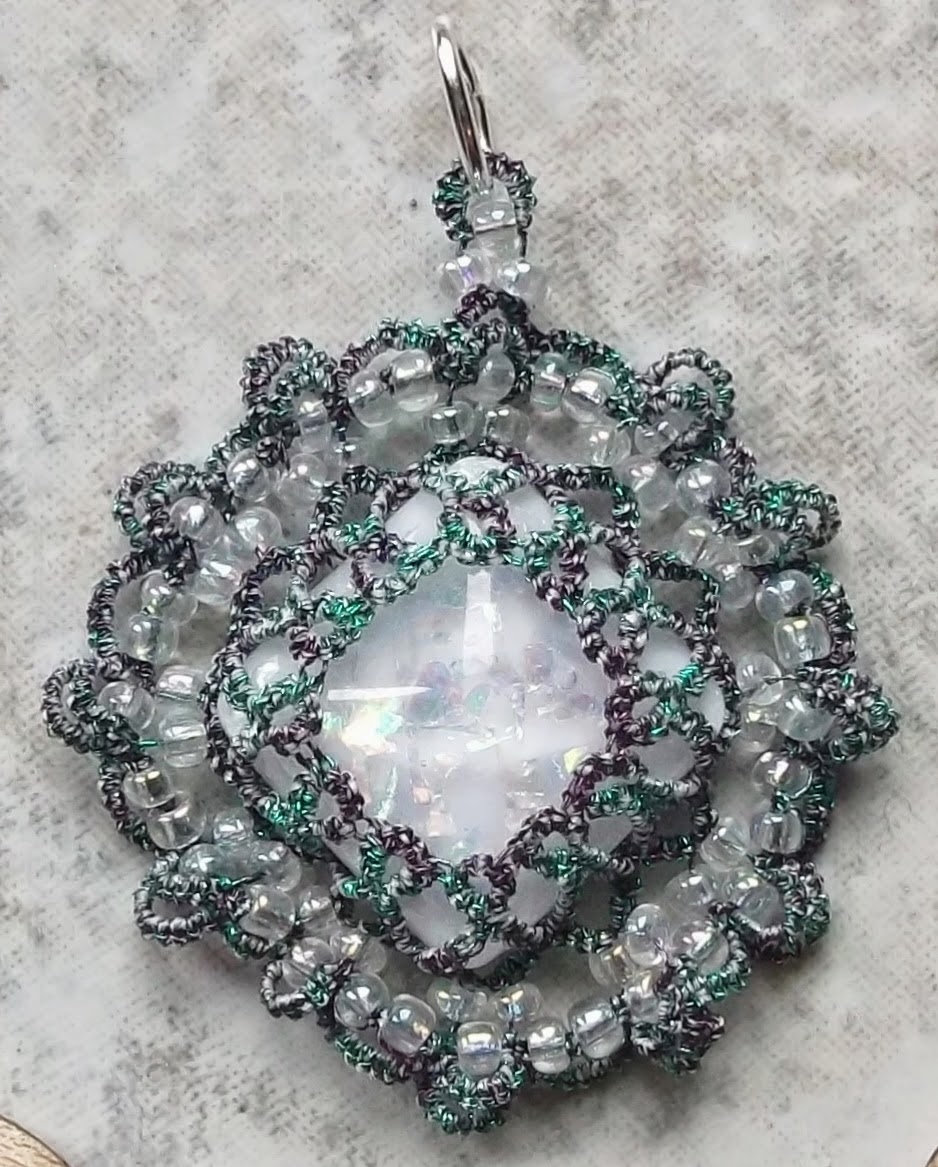 HisKid tatted the Traditional Cross from Tatting Patterns by Lyn Morton in size 40 Lizbeth Angel's Love. This is a start on a test tat for Elaine P. Gan at Test Tatters and she loves the size 40 Lizbeth Raspberry Pink Med. and Fruit Fizz together.

Wanda had such wonderful comments on her triangle from last week that she thought she'd try a few of the things that were suggested, so she has a number of samples ready to work on.