Sue has day 8 of TIAS done and she thinks it's looking like daisies in a plant pot with a leaf hanging off the side. 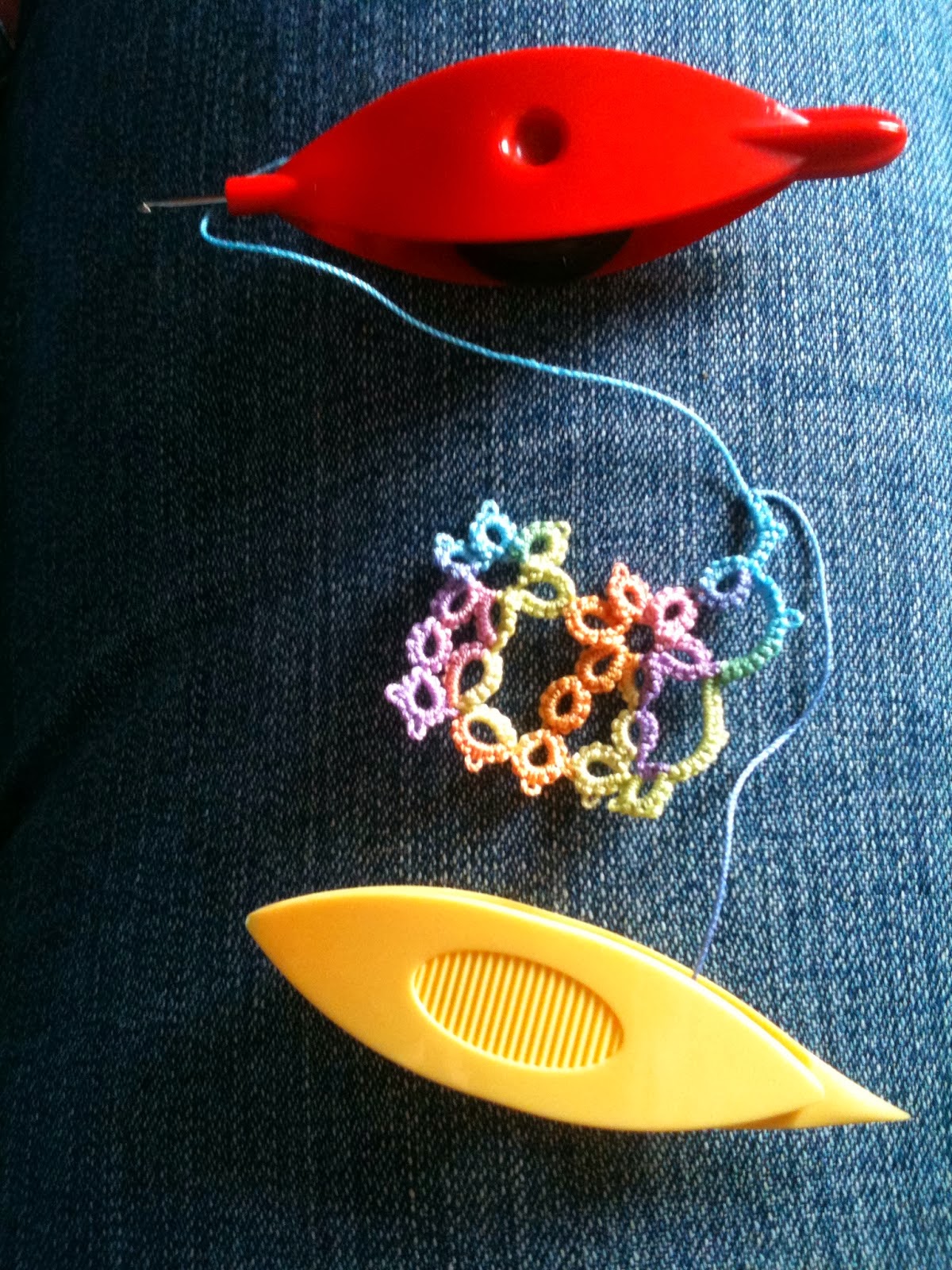 Claire thinks day 8 of TIAS are the sails of a boat. She tried a small motif by Mary Konior, from her book Tatting With Visual Patterns  called Dress Trim, in Aunt Lydia size 20. She might use it as a pendant or tat more of them to make a coaster. 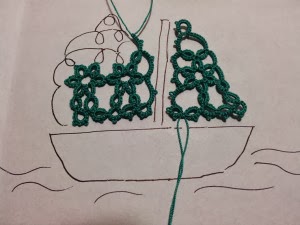 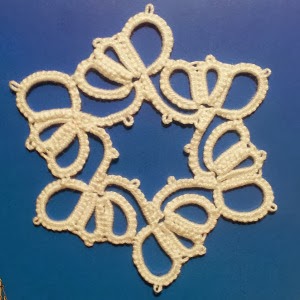 mb duke is working on this heart bookmark in time for Valentine's day. This Vinegar Spice Cake was decorated with snowflakes sprinkled with icing sugar. TIAS after day 7 and then after day 8. Is it a gnome? a character from Duck Dynasty? Everyone will have to keep tatting to see. 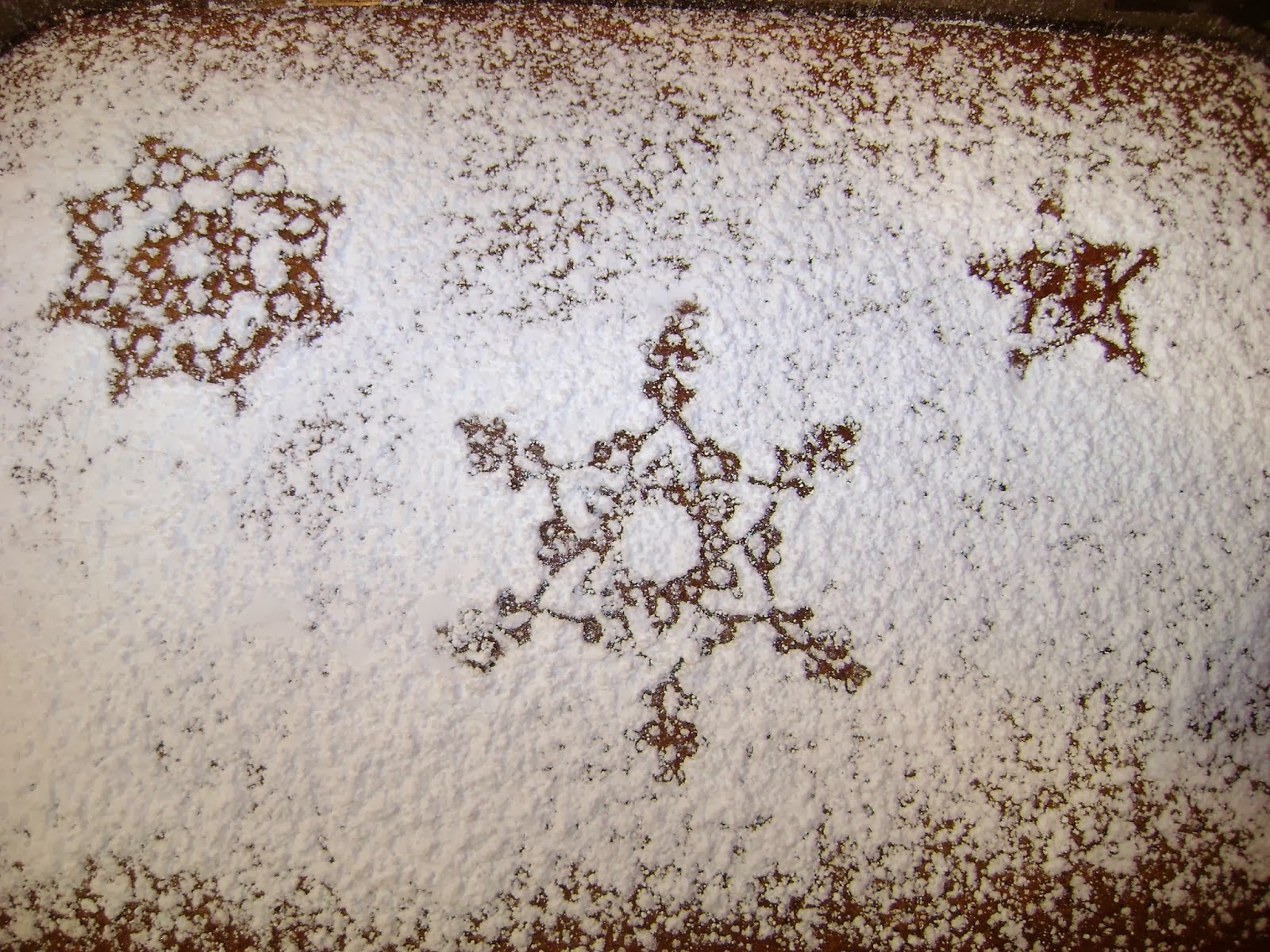 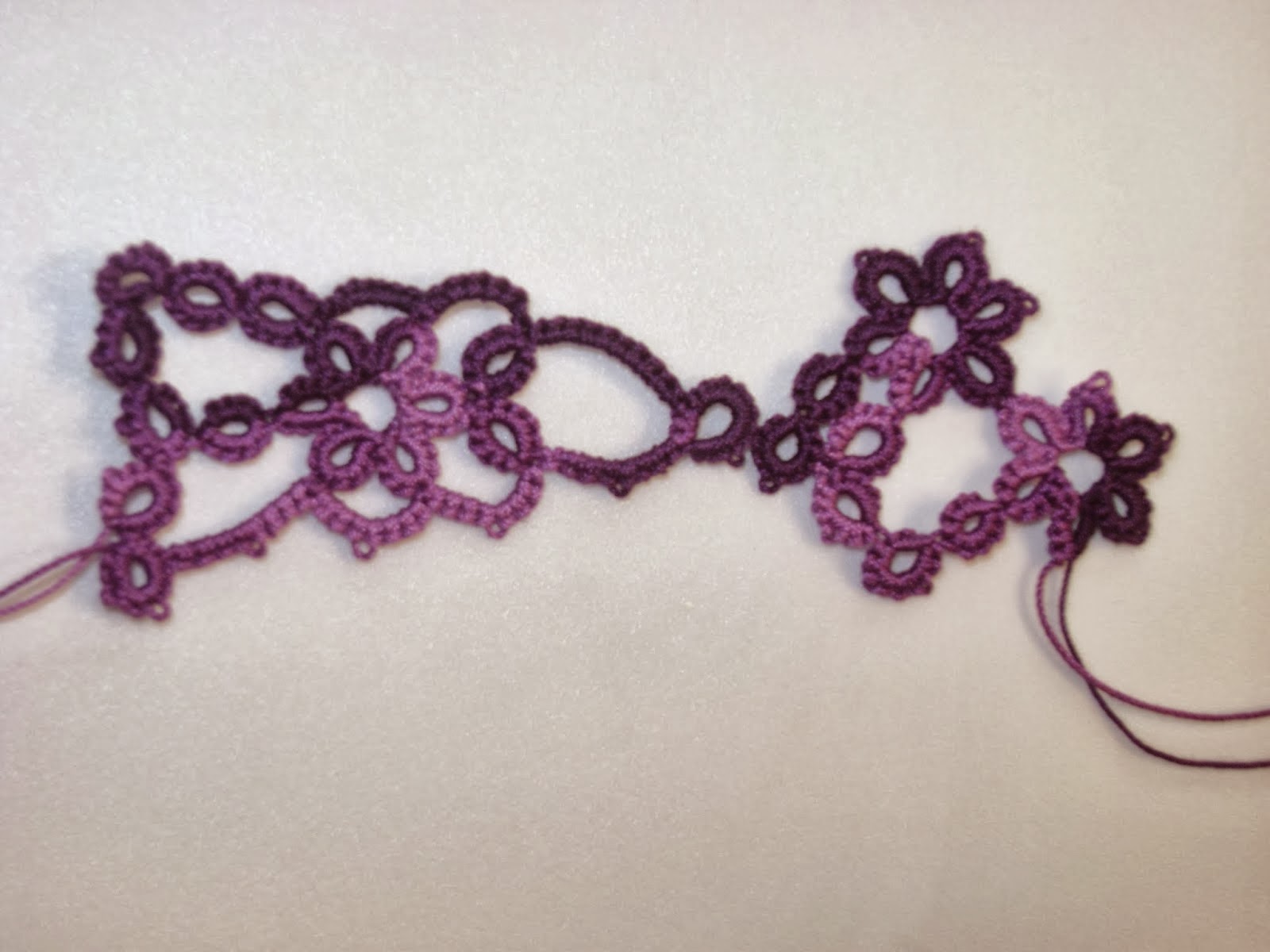 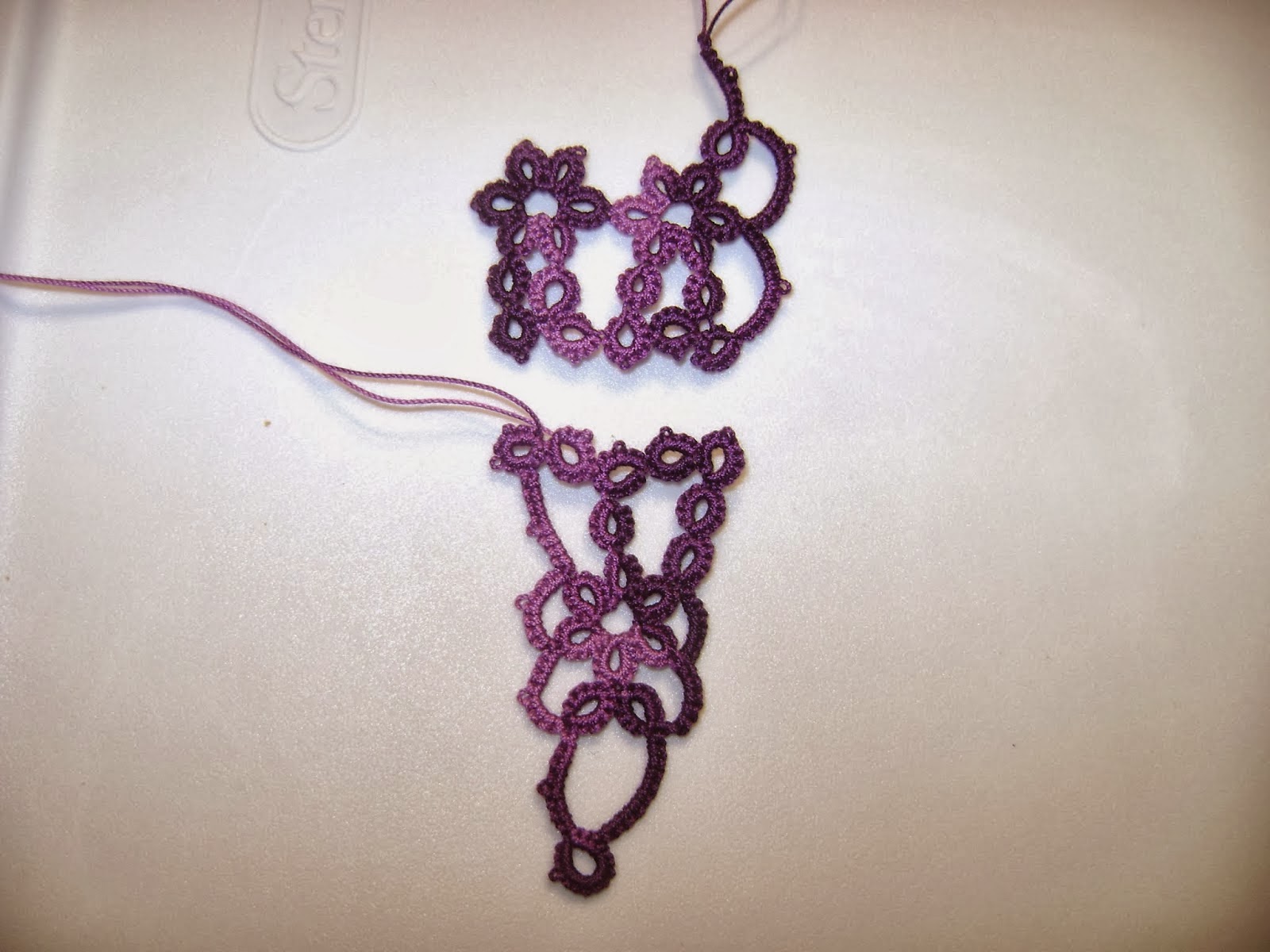 Lelia has been working on Motif 3 from Motifs for Marie by Kaye Judt, practicing her Double Picots in size 20 and size 40, trying to empty some shuttles.

Diane is easing herself back into tatting with a motif from Patti Duff's Minitats and since she didn't think she had enough thread on the shuttle she turned it into a bookmark. Her Mom's dark green Spinning Wheel is coming along slowly but surely. 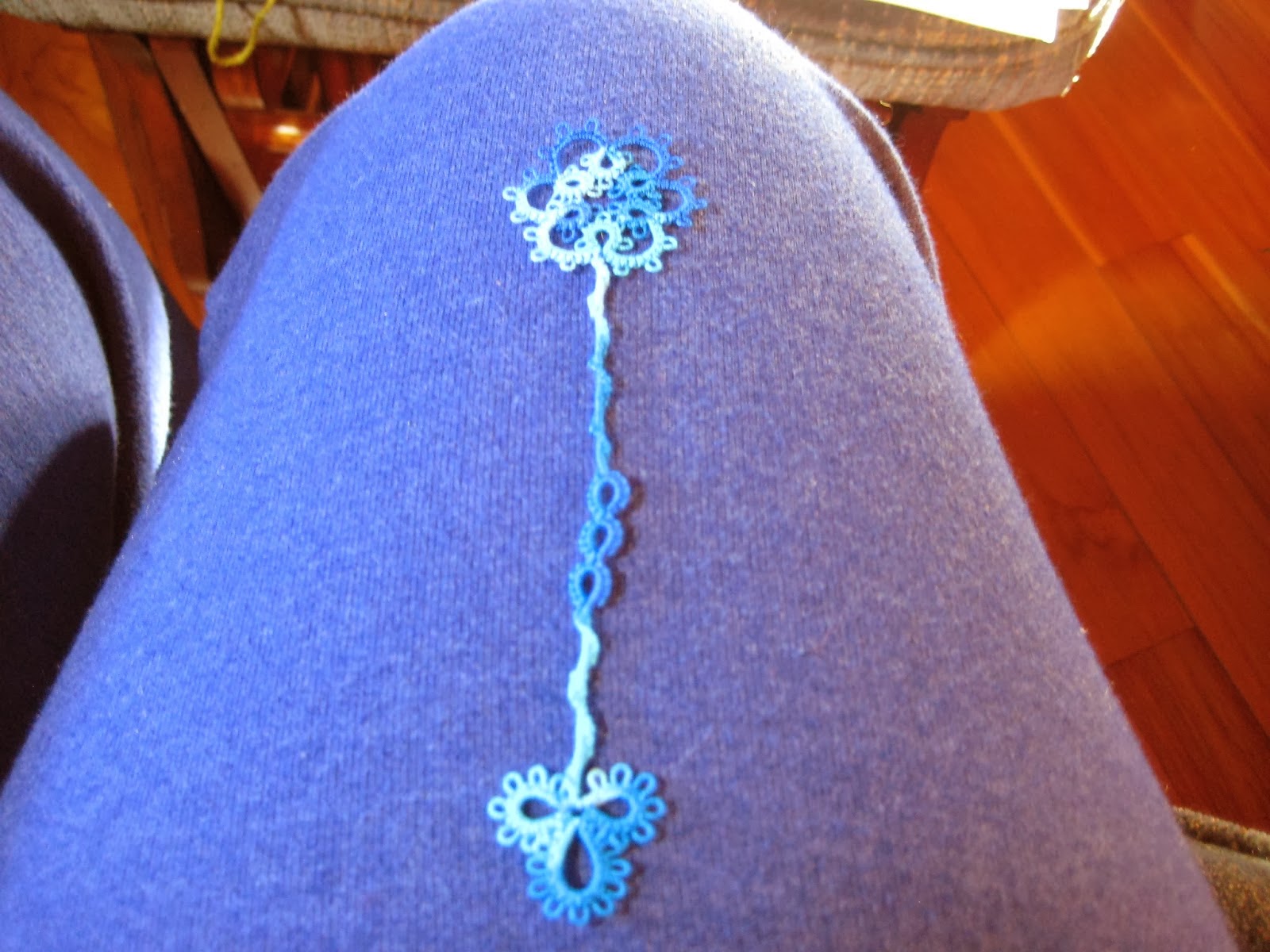 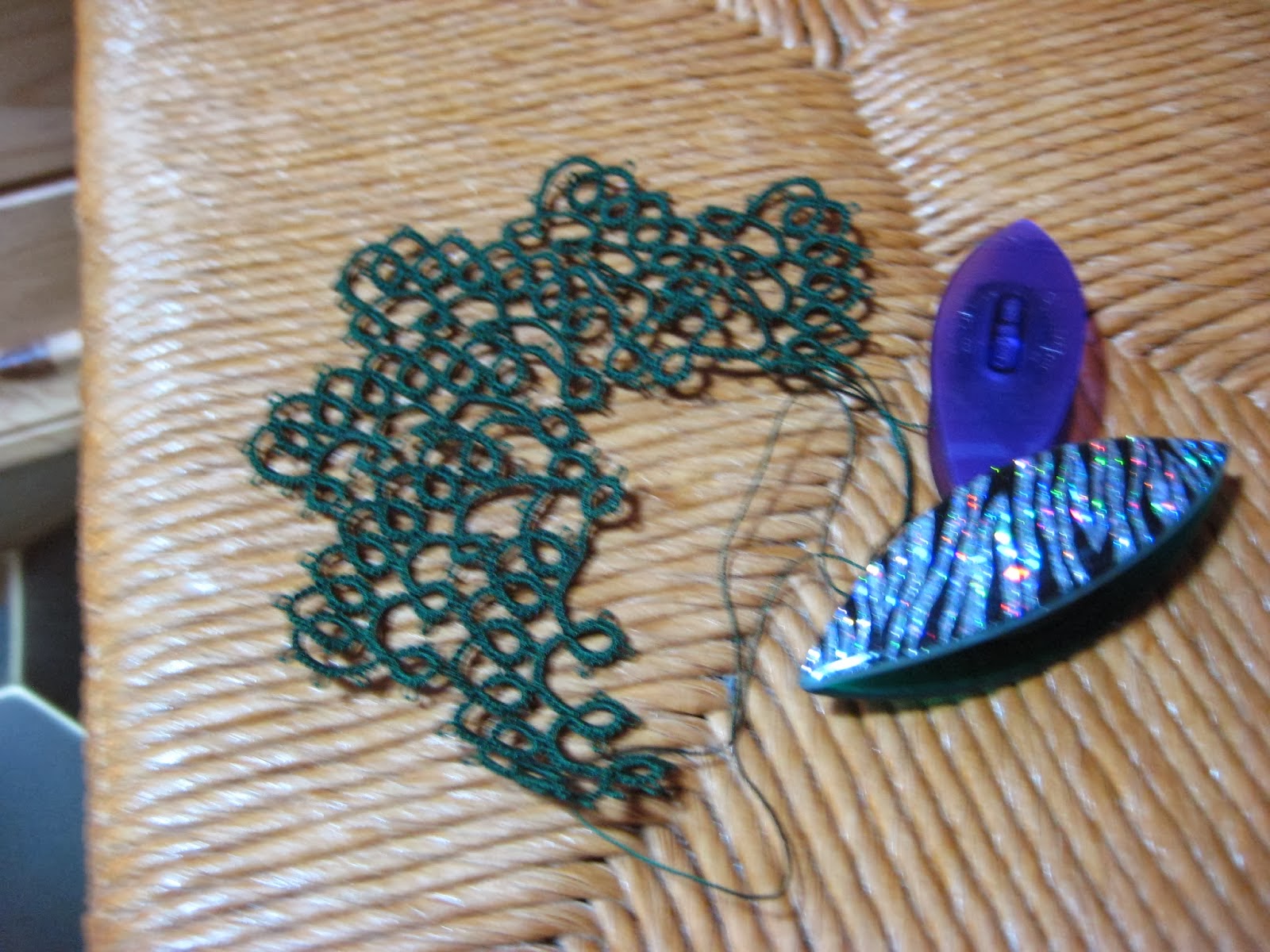 Fox has day 7 of TIAS and has no idea what this one will be. Venus #40 thread was used for this Easter Egg. Day 8 of TIAS is done and she's still in suspense. Read Fox' thoughts on tatting and blogging and what it means to her. 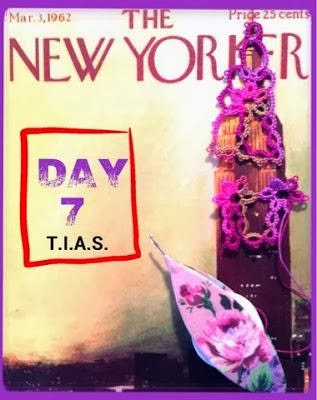 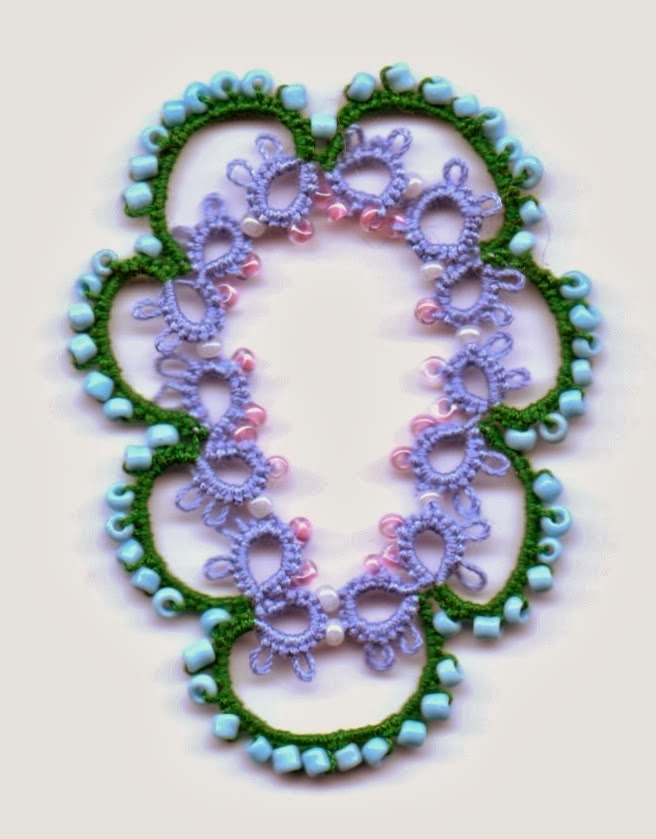 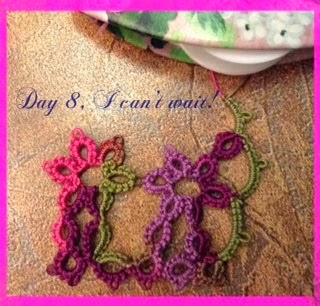 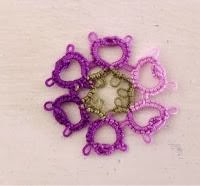 Kristen tatted a pendant from a Russian book and day 8 of TIAS. Maybe it's a windmill? 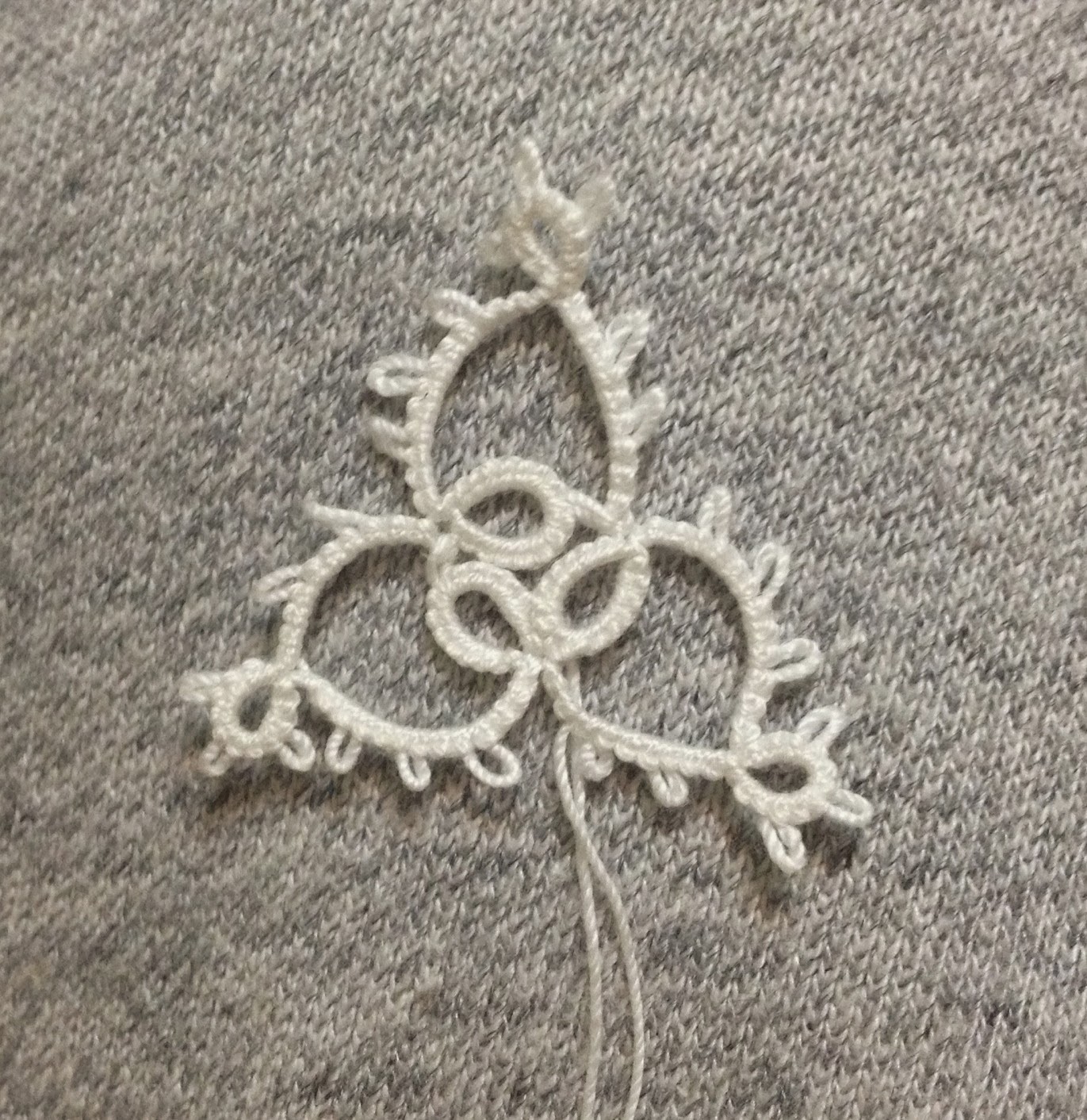 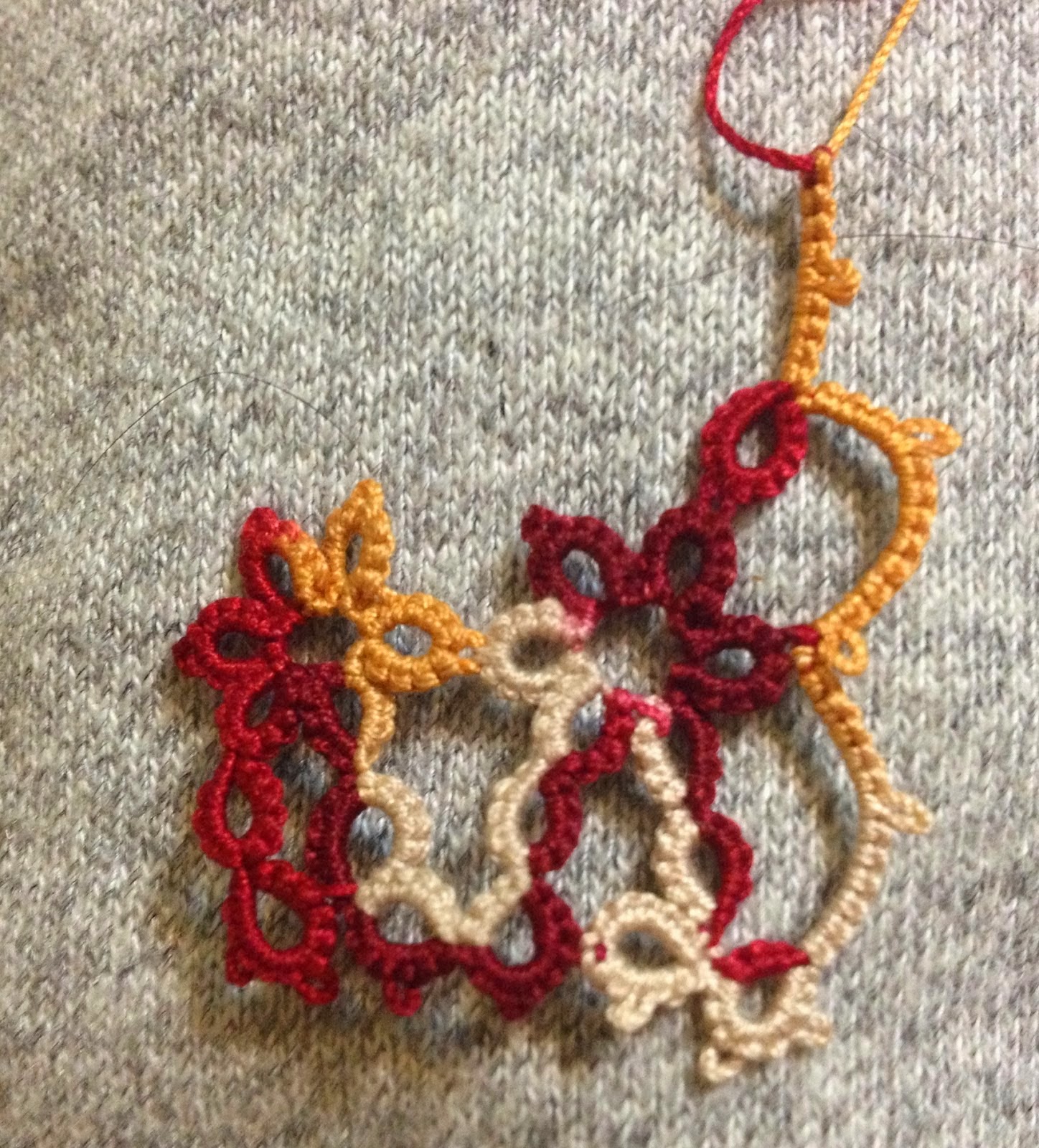 Marie made 50 Guardian Angel pins in Lizbeth size 20 purple using a simple doodle for the Lutheran Women's Mission League. She used two strands of gold thread to tat around these opals and make earrings, which remind her of a bird's nest. 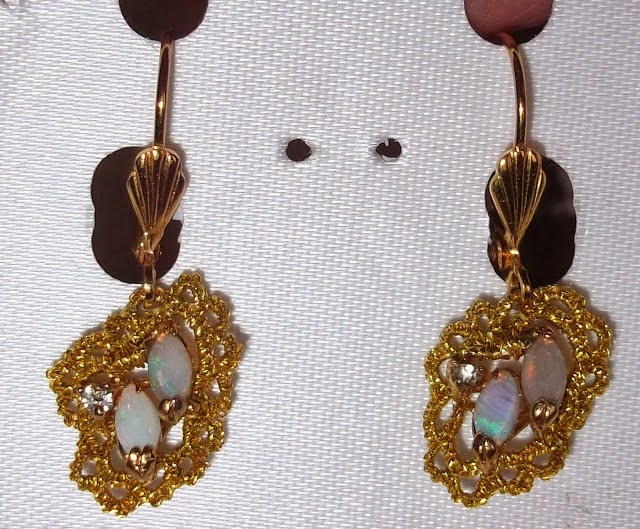 Sue's niece wants a set of tatting in photo coasters so she tried Mary Konior's Ring A Ring O' Roses from Tatting with Visual Patterns in size 40 Lizbeth Sea Island Citrus, but it was both a challenge to tat and too big to fit. 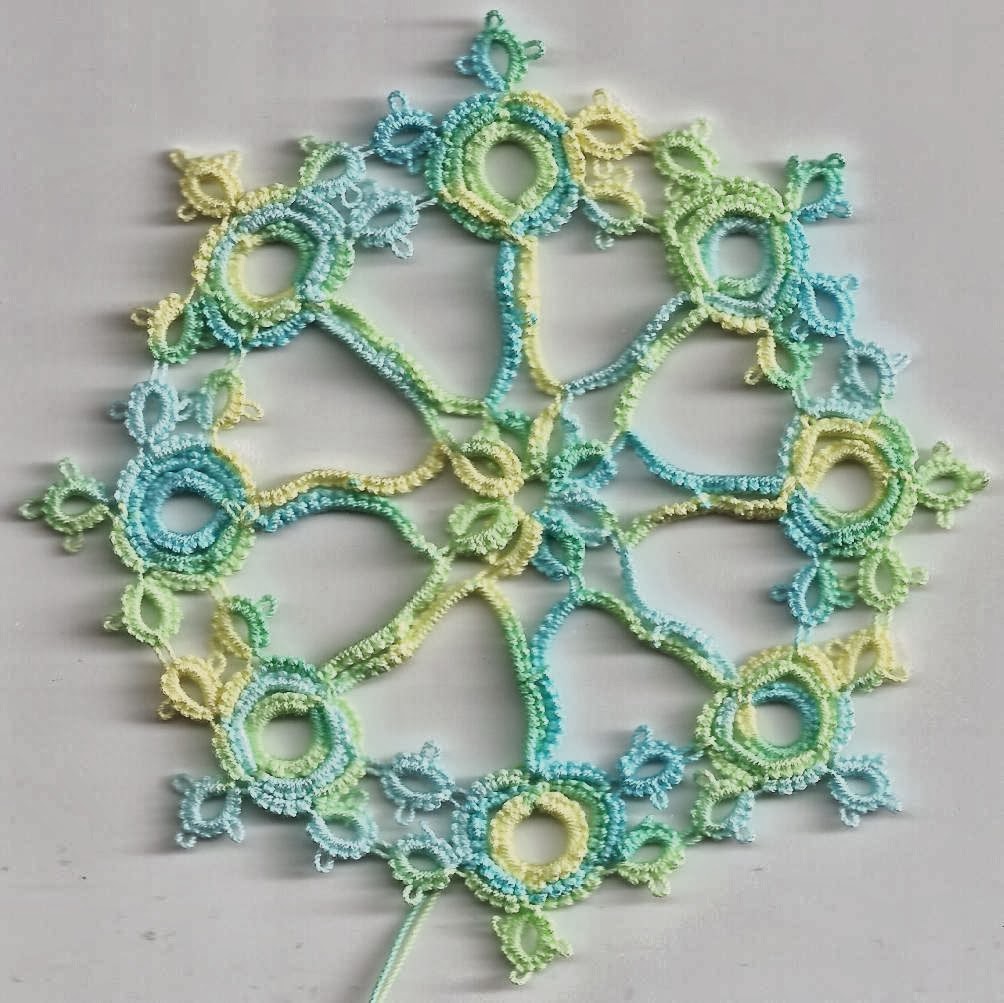 Wanda has day 7 and day 8 of TIAS completed and like the rest of us, still has no idea what it will be. She found the centre of this long picot motif in her bag and doesn't remember what she was doing with it. She decided to tat a row around it and now she has to figure out what to do with it. Maybe a cover for a Christmas ball?

Dress Trim, in Aunt Lydia size 20. She might use it as a pendant or tat more of them to make a coaster.easter egg hunts