Claire shows day 2 of Jane's TIAS. Day 3 she thinks it might be a horse and carriage. This bracelet pattern she is working on is a design by Julie Patterson done in Lizbeth size 20 Ocean sunset #155 and Fern Green Med #675. 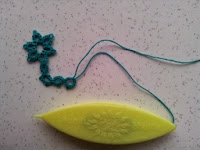 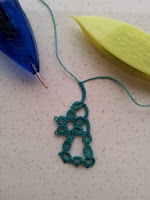 Marta crafting for the holidays, celebrating, and preparing for the new year didn't leave Marta with a lot of time for tatting and posting, but one thing she had managed to post is the winter version of her necklace and earring set. 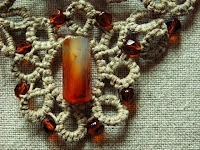 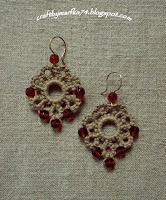 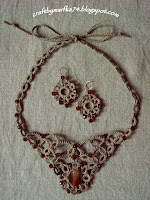 Grace finished her 25 motifs for 2013 and is ready to start another 25. One of the finishing pieces is Gladys Angel from the Palmetto Tatters 2012 collection, designed by Sharren Morgan. The yellow/gold 5 point star version of Dale Pomeroy's snowflake is made in Honey Drizzle, size 40, Lizbeth thread with a solid blending filament. The SSSR angel by Anne Bruvold is shown with another snowflake pattern by Dale. Vida Sunderman's Large Crystal Snowflake is a gift for a coworker. 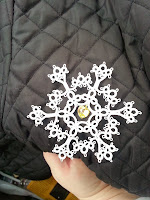 Fox and umintsuru are engaged in a challenge. They selected a design and they're off...sort of. Fox has made multiple efforts, without success. After 24 hours work, another one was scrapped. She started again using size 80 Lizbeth. It's a very fiddly pattern. Then just as she was about to give it up, it looks like it's working. 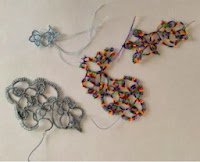 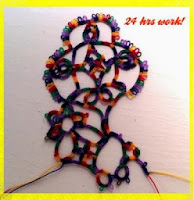 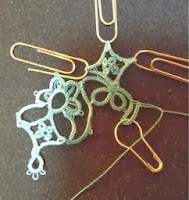 Kristen has vigorously blocked the doily, which now lays flat and she has 24 of the 40 tulips done. See these? They're the tulips. She's also got day 2 of TIAS done. 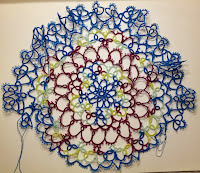 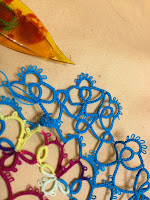 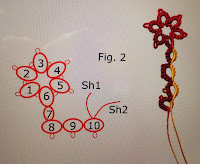 Marie finally tatted one of Nina Libin's Corner Bookmarks for herself. This one was done with size 10 Seagreen crochet thread with a gold filament.

Wanda has day 2 and 3 of Jane's TIAS done, using Lizbeth #130 Island Breeze in size 20. On day 2 she thought it was a pinwheel, but by day 3 it doesn't look like a pinwheel any more.