Mica tatted Day 10 from 24 Snowflakes in Tatting worked with DMC metallic thread. She liked the pattern but hated the thread. It kept splitting and tearing and she couldn't tat more than a few rings without the thread snapping. She eventually did the whole pattern with chains and mock rings and notes that it might be a coincidence, but the skeins that tend to be more difficult. 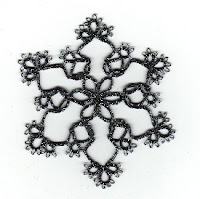 Krystle introduces us to Dr. Von Threadmore scientist extraordinaire who has been changing ordinary white thread into all the colours of the rainbow. 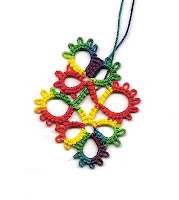 Aileen topped her Halloween post with charming little cross stitched picture and continuing in a seasonal vein she shares the Maple Leaf by Tammy Rogers and the Sugar Maple Leaf by Gale Marshall, both done in a variegated thread she got from Hongkong. She finishes her posting with the winners of her HALLOWVERSARY giveaway. Congratulations to all the winners. 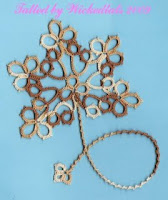 Diane chose some favorites, "Beatrice" from Tatted Doilies by Iris Niebach, Tatskool's Raspberry Sorbet HDT, and two of her Grizzly Mountain Arts shuttles to keep her on track tatting instead of e-farming. It's a much more productive use of time. 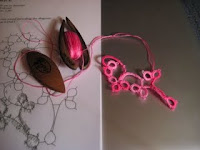 Kathy circled her Halloween pumpkin with a cloverleaf edging done in size 30 thread. 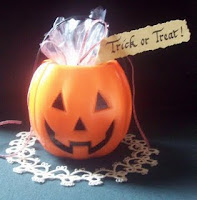