Laurette tatted the Bookmark with Overlapping Chains by Jon in size 20 Lizbeth Red Burst and White.It was a bit of a challenge to keep it overlapped on the second round. 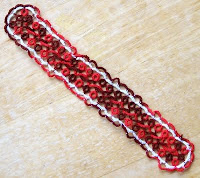 Chiara tatted 3 Praying Angels using a Teri Dusenbury pattern to give as a little present to her friends. They were made using DMC perle cotton n.8 in variegated light blue, variegated orange and solid yellow. The skirt was tatted a little longer than in the pattern.

Krystle has been trying to make the Spinning Wheel Glass Mat in fine silk thread and although she got further this time, she ended up making the same mistake. Tried retro tatting. Ran into a knot. Cut it off. We all feel her pain. 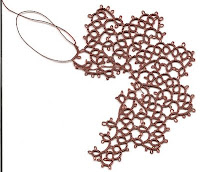 Charlotte came across a box of Anchor Liana Metallic - a size 10 mercer cotton with a glitzy silver metallic threaded through it. At £2.99 for four 50g balls, she just had to have it. Here it is in the Ribbon Snowflake from Tatted Snowflakes by Vida Sunderman 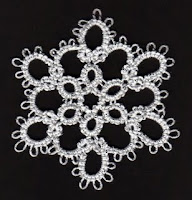 Ellen tatted a remarkable parrot from her own design for the Extreme Round Robin using mostly mainly Flora and Coats size 20 threads. She also did a small peacock tatted with Olympus size 40 thread and a pair of paper clips specially designed for Becky who was her partner for this round. 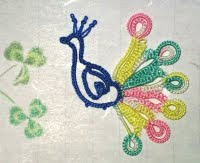 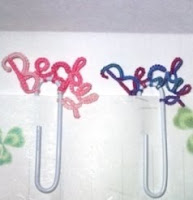 Aileen is making progress of her Christmas tatting making Yarnplayer's Dream. She has done several in size 11 and 13 crystals with size 20 rainbow Milford thread and 3 with glass leaves in 20 rainbow Milford thread, 20 Omega blue thread and 20 Lizbeth Spring Green thread. Then she did 5 with plastic leaves instead of the crystal. 2 in 20 green DMC Cebelia and, 2 in 20 blue Omega and 1 in 20 Milford Rainbow. Her Christmas tatting has been rounded out with Ellen's Butterflies on a paperclip done in Lizbeth Red Burst, variegated purple Coats, black DMB Babylo, 40 Olympus #801, red DMC cebelia, blue DMC cebelia and 30 yellow DMC Cebelia. 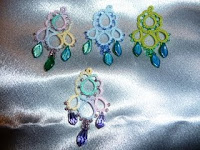 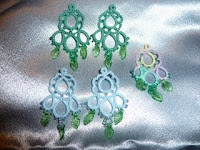 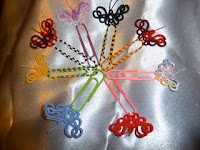 Heather has been tatting LOTS. She has several celtic style necklaces created, a tutu for a ballerina doll, Jon's tutorial for tatting with a ring was easy and fun to follow and grew from one into 6 joined rings. Then there was some free form tatting and some on the go projects. 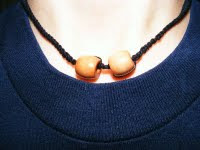 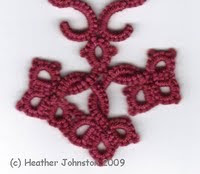 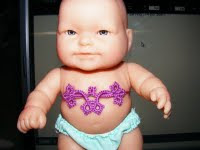 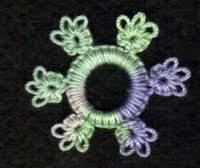 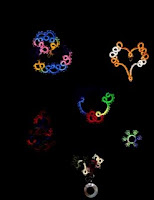 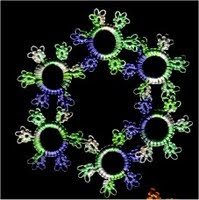 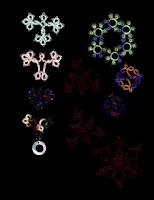 Jeff has some new tatting books including Jon's Tatted Snowflake Collection and he has plans for tatting lots of snowflakes like the one Jon sent him. 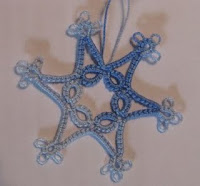 Martha tatted Vicki Clarke's Ruffled Heart in size 40 Lizbeth, then did it again with Shuttle Lab Trends HDT. She shows us the one made for her by Tatting Chic, using a Yarnplayer HDT. Another gift, is the Jane Eborall pattern made by Sherry Townsend which she thinks is made with a Lizbeth thread. Martha has let us know she is de-stashing on ebay again under the name esstats. 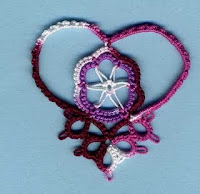 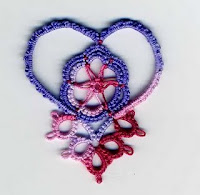 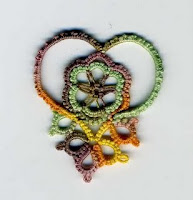 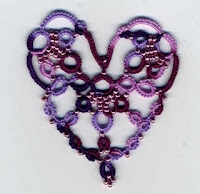