M tatted "Queen of Hearts" from the book Tatting With Visual Patterns by Mary Konior in Lizbeth size 20, col 114 and she plans on tatting it again in another colour.

Viv thinks she has the final version of her Halloween costume done. The period corset has several gussets and she has covered the front ones with tatting. The skirt has a long curved slit that she has also decorated with tatting, and to top it all off she'll be wearing tatted Raspberry Sorbet earrings. Now we want to see pictures of of the whole ensemble make up and all. 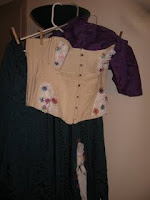 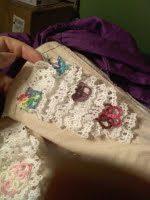 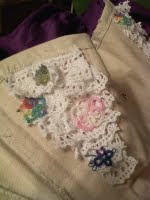 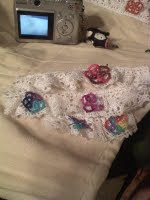 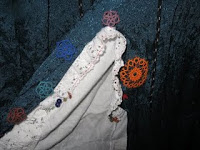 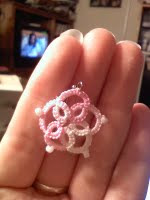 Pam just got around to posting this picture of a heart. It's another of the beginning lesson challenges from Georgia Seitz’s online classes. 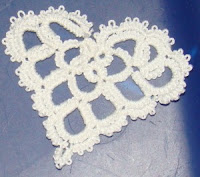 Vinnie saw Teri's butterfly bookmark and these blue beads and she had to match the ideas up to create her own butterfly bracelet. Worked with 4 shuttles (4 shuttles!) and no outer border. Free flying butterflies on a bracelet, or is it an anklet? 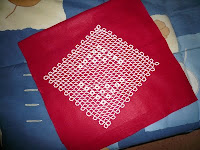 Shirley tatted the heart, a Barbara Foster adaptation of a J.M. Blackman design done in Lizbeth thread size 20, color 121 and white DMC Cebelia size 20 and added a tail to make a bookmark. The other bookmark is Jane Eborall's design which was tatted as a gift and adapted in colors to depict the owners' own cat with green beads for the eyes and a pink one for the nose. The grey is DMC cordonnet special and DMC Cebelia white, both size 30. Now she has orders for several more and varying colours to match other cats. 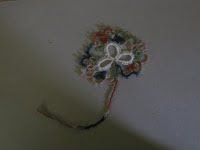 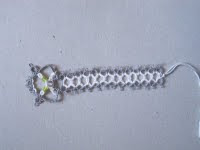 Anne won books and thread at Frivolitetsknuten. She has been testing quilting threads for tatting and plans on buying more Gütermann SULKY, Cotton 12 and Aurifil Cotton 12. She used Gütermann SULKY Cotton 12 to make the dragon and gave it to a friend. She's currently looking for a small but advanced motif to make in three colours. This one was a bit too complicated and she needs to be able to write the pattern too. 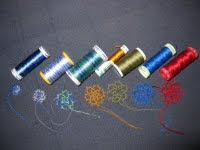 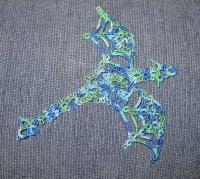 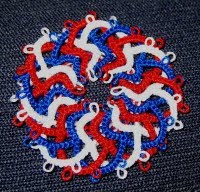 Carol has been using Tatting Tea Tuesday to create a fall display. First there is a lovely little pumpkin designed by Sherry Matthews. Then an updated Workbasket pattern done by Tammy Rodgers worked in Yarnplayer's Sugar Maple HDT and a solid butter cream Manuela. The right leaf center is also Manuela in light pumpkin. The acorns are from Karey Solomon's book "Tatting Turns over a New Leaf" as are the next patterns,"Simple Leaf" and "Silver Maple Leaf", done in Yarnplayer's Sugar Maple HDT and a solid red Manuela for the center. The cute little leaf is designed by Sherry and done in Altin Basak thread. Finally here is the dining room table all decorated for Fall 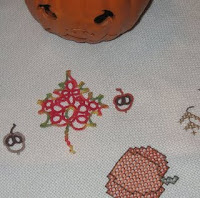 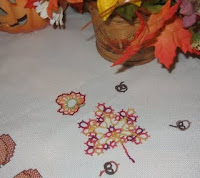 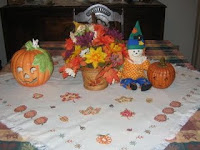 Diane thinks "Itsy-Bitsy Snowflake" is her favorite pattern in Samantha Melnychuk's A Veritable Tatted Blizzard. She used Cebelia, size 20 and mounted it in a picture frame, where it's a perfect fit. Rather than play with other threads that might not fit so well, she's just working with more of the same. Check my blog for a thread comparison, it's in the sidebar on the right. Any of those listed will be roughly the same size as the Cebelia 20. 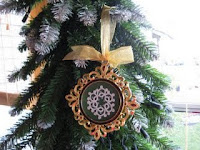 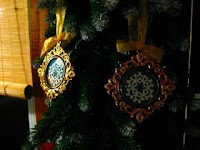 Heather is collecting hearts for her friend Tracy, both hearts and notes to wish her well, as well as hearts to be sold in a fund raiser for Tracy. To promote this activity Heather has created 2 variations of a heart design that people can use, although I'm sure other hearts would be welcome as well as long as there is no copyright infringement. Heather's address is in the pattern PDF. If you have the time, I'm sure both Heather and Tracy will appreciate your efforts.

Kelly received her Fall-oween exchange which was a lovely tatted pumpkin turned into a pin inside a marvellous card decorated with tatted flowers.