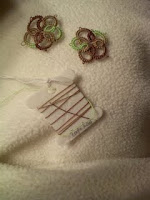 IsDihara tatted these Sweethearts and the colourful HDT hearts is getting a second round that required learning to tat a split chain. It's hard for a left handed tatter to follow right handed instructions. 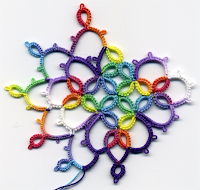 Linda's Halloween cards are finished. The bat and ghost are tatted with Lizbeth 20 and the patterns are Mark Myers. The pumpkin is tatted in Majestic 80 and the pattern is by Sherry Matthews.

Angie found the tatted stork body that had become lost among her sewing projects. This is Jane Eborall's pattern done in size 20 which is too big for her cards so she is re-doing it in size 40.

Aileen tatted "Little Flowers" by Marie Smith and attached them to hair clips as a Christmas gift for a relative's little girl. 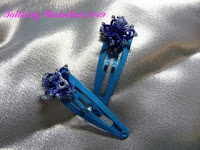 Diane was a winner of Sherry's Mondo Monday giveaway and she received some lovely silk thread that was a perfect match for her CQ. The pattern is "Leaf Braid" from Tatting With Visual Patterns by Mary Konior in size 20. 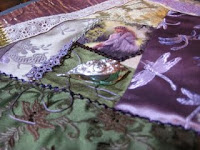 Eva has posted pictures of threads and shuttles and tatting at a local get together. 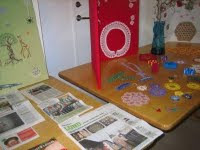 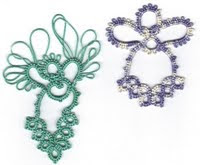 TattingChic received a surprise package gift of Heather's new book Tatted Earrings and Things and tatted the hummingbird pendant from it in "Pink for Link" HDT. 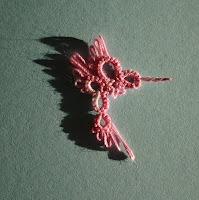