This is my first post so bear with me folks. If I forgot anyone I am sorry.
Mica tatted this snowflake she says she actually wanted to finish it in June but didn't get there until early July "The little guy is "Little Ring Snowflake" from Tatted Snowflakes. It is tatted with Kreinik No. 4 braid. " 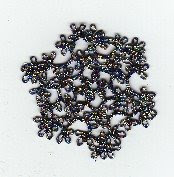 Laura Rose has been busy working but managed some crafty bits. You will see here a counted cross stitch which reminds her of her cat Sox. She is planning on framing it and hanging it in her classroom when he gets it. The next photos are of some French Beading she has been doing. She has also received some nice gifts in the mail. She is also working on a little Bucks edging she plans on using for her first grand baby. Congrats Laura Rose :) 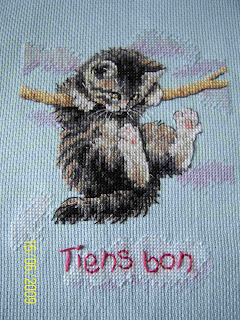 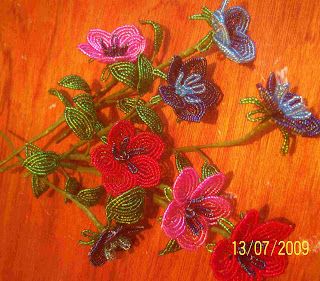 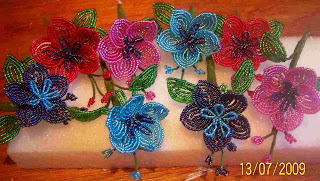 Vinnie hasn't had a lot of time for tatting lately but decided to take upon the challenge of making a heart of a six sided snowflake she came up with this using red and mint green. She still has her filet crochet project going on and has made this lovely bag to hold it in. 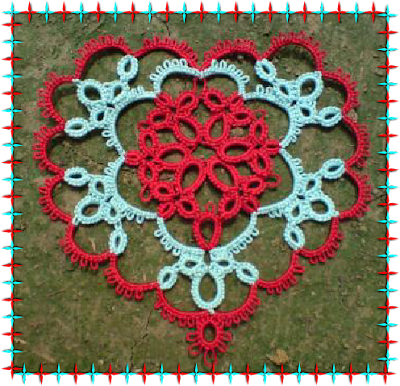 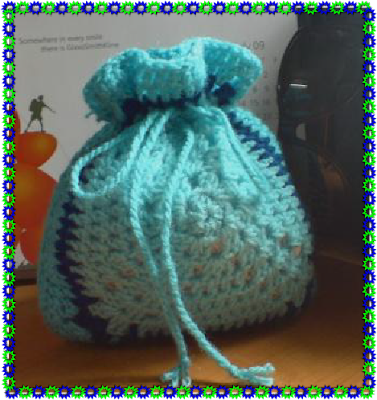 Shirley has been tatting up a storm here are her motifs 12, 13, 14, 15, 16 & 17. First is a snowflake using the new Christmas thread from Lisbeth size 20 the snowflake measures 4" and she is not sure where the pattern came from. Next is a bookmark she tatted for her son at his request. Next is a thumb rosary and 2 small angels she plans on making and donating to "the Preemie Project" at the Univ. Hospital for them to sell at their craft show. 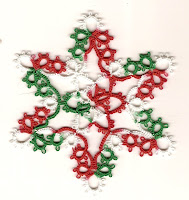 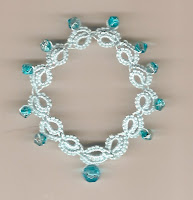 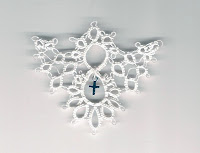 Ellen has tatted this bookmark for a co-worker who is leaving the office its one of her favorites from Dianna Stevens' Animal Bookmarks - A Tatted Zoo. She has been working on more ATC's with tatting and paper cutting. Ellen also says "This is my 99th post! I'm thinking of a giveaway in my next post. Watch the space!" (meaning her blog) 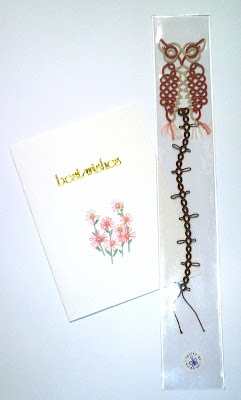 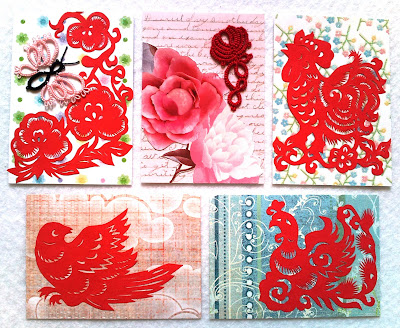 Mrs. John her #12 motif is a doily that she entered in the local county fair. The pattern: the Occasional Doily from Tatting Doilies and Edgings,edited by Rita Weiss, Dover 1980. The pattern specified size 10 thread and she used natural size 10. This motif was needle tatted. She also did a lovely hand dyed thread display. 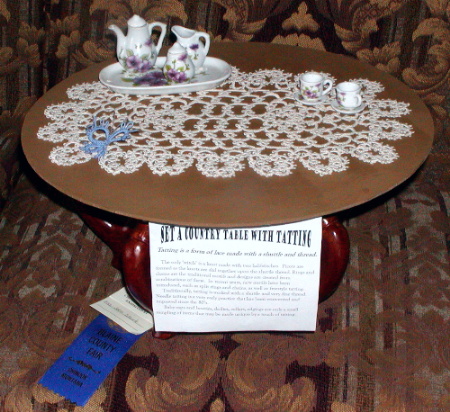 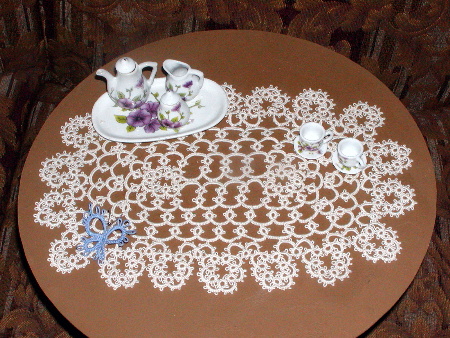 Aileen has been busy as well she tatted a hanky edging found in the Handy Hands Newsletter. She got some neat shuttles from the Shuttle Shop. She is giving credit for her tatting pals whom she received exchanges with, you will have to visit her blog for those lovely pictures there are quite a few. Valentines towel exchange, This is the tape measure she sent to Laura, Birthday exchange from Jon, Loopylacer's charm exchange, Angel Roundrobin, Angel Roundrobin, Thread exchange, and Intatters Butterfly Exchange. 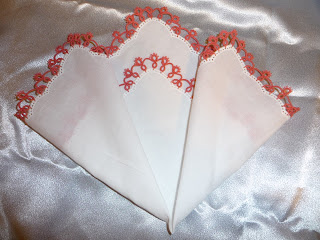 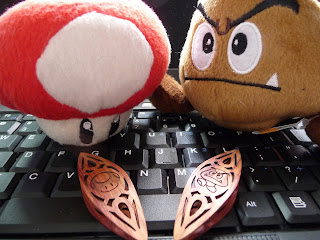 Anne is working on this lovely piece and says "Finally some warm and lazy days after a rather cool summer so far. With the possibility of tatting in outdoors." 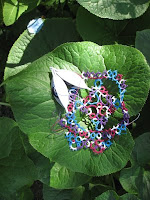 Diane has been inspired by Tattycat to tat some snowflakes. The pattern is Itsy-Bitsy Snowflake from A Veritable Tatted Blizzard by Samantha Melnychuk. 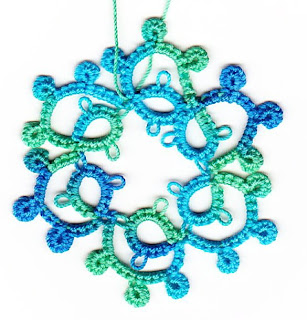 Heather has some new hand dyed threads and plans on doing a benefit craft sale for a friend who has stage 4 breast cancer. She is still looking for some donated crafts to sell see the blog for details.

Jeff has tatted his 23rd motif and its a book mark he says "This leaf was made using Yarnplayer's Summer Trail HDT in size 30. As you can see I turned the motif into a bookmark by making a length of lock stitch chain where the stem is. I really like the way it turned out." I like it too its very nice! He is also working on chainmaille. 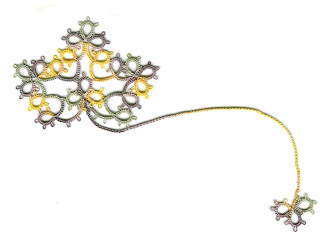 Sherry had done a "mountain" of HDT and spent a good half hour hunting her kitty Raku who decided to try the top shelf of a closet for a napping spot. 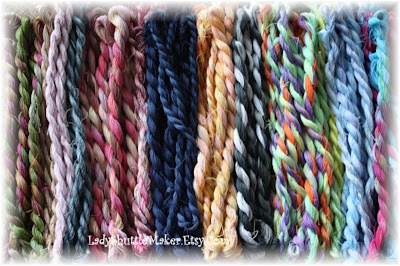 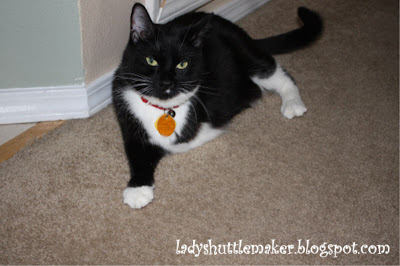 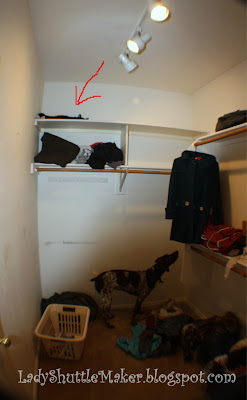 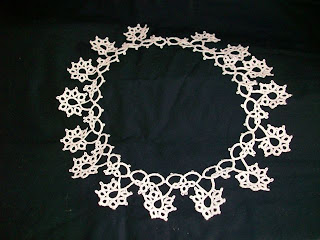 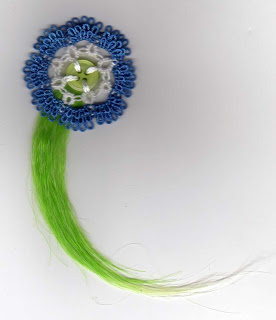 Very pretty work. I love your tatting and flowers.

Your tatted work is beautiful! The one made with Kreinik is eye-catchgingly sparkly... When you make projects using Kreinik threads, please share pictures on our Facebook page and post a link to your blog (we are Kreinik Manufacturing Company on Facebook) so that more stitchers can see your lovely proejcts.