IsDihara, who started Tatting Tea Tuesday has joined the challenge. She not only shows us this week's tea and tatting but she also shares with us a pattern for a dramatic black tatted border that she has tatted in size 70 thread. Does anyone recognize the pattern? 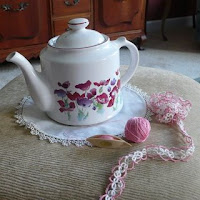 Shirl doesn't have any tatting to show but she shares with us her delightful tatting storage chest.

Krystle has issued a blog challenge for tatters to show their tatting corner "as is".

Vinnie has a little crochet bag she made to carry her tatting supplies. 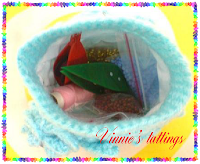 Jeanne shows us her tatting corner. 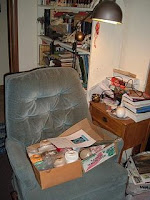 Heather shows us her tatting corner complete with her little helper. Plans are underway to teach her daughter to tat. 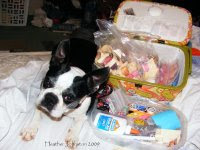 Wally has finished and mounted her fairy hair and flower on a hair clip. 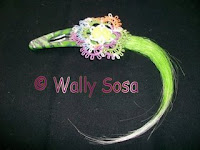