Shirl tatted a 6 inch doily made with DMC 8 in Ecru from “A New Twist on Tatting” by Catherine Austin.

LauraRose has finished her tatted "E" for the display 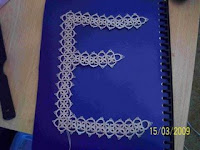 Krystle tatted the same bookmark in Flora size 10 thread, but one was tatted 8 weeks ago and the other tatted recently and yes we can see the improvement. The second one has better tension with more even stitches and picots.

Connie Angeline received her Valentine exchange tea towel so now she can show that towel she sent and the one received. The edging is from an old Workbasket and is presented upside down to resemble hearts and the heart motif itself is Betsey Evans design. Connie still doesn't know who her partner was that sent her this towel with it's scattered hearts. 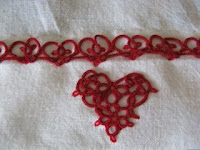 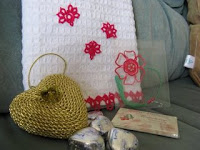 This is Charlotte's first attempt at working with fine thread. The pattern is Mary Konior's Patchwork tatted in YLI cotton machine quilting thread in the mango colourway. 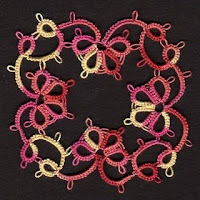 Kelly tatted a doily called called "That Medallion Again" shown here with 16 more mini motifs added around it's perimeter and a finishing row of chain to pull it all together. It's lovely and if your sister in law doesn't love it you can send it my way. These tiny shamrocks are a modification of the celtic butterfly wings. Aren't they adorable? 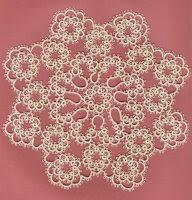 Angie finished the yellow hanky edging and attached it to a piece of linen that she had. Ellen Lai's shamrock bookmark was the quickest thing she could tat for a birthday gift. 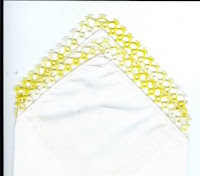 Steph is pleased with her ebay finds of a couple of tatting books and a flat shuttle. Mark Myers', 'Bunny In An Egg' with the white bunny tatted in Flora 20, and the egg in Olympus 40, creamy pastels. The chocolate bunny is tatted in cocoa Lizbeth and the egg is Manuela 20. 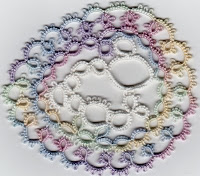 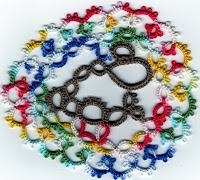 Vinnie has been playing with mignonette tatting over some shiny beads. They would make lovely buttons or depending on the size they would also make lovely earrings, especially the covered flower bead. 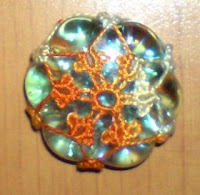 Heather has a new butterfly design on her blog. This sample is done in Grapity - Lime HDT. It's so cute! 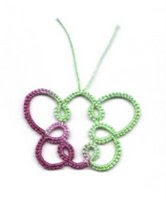 Shirley tatted the bookmark with the tail from Mary Maynard's "Rings of Flowers" using size 70 thread, color #18A. The #D flower is from Linda Davies" "Summer Collection of Tatted Flowers". It is the purple allium tatted in DMC size 20, color #210. The ornament is tatted using razzle dazzle bright red and silver which is about size 20. The pattern is from Linn Mortons' book "Tatting Patterns" and "Hearts and Flowers #1" is the pattern. The bookmark is from "Simple Angel Lesson Series Part 5 - Bookmarks/Edging by Sabina Carden-Madden and it's made with Lizbeth size 20, color #121. 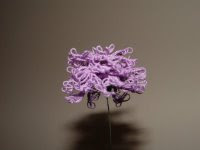 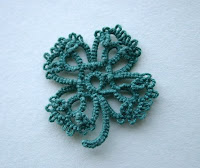 Barbara tatted this heart using Manuela size 20 thread. The pattern is from "LEARN TO TAT" by Janette Baker. 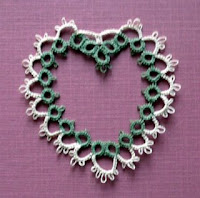 Iris has posted a drawing for the second version of the TIAS.
Aileen tatted a beaded bookmark from Nina Libin's Lace of Bead #2 in 20 light blue omega with light frosted blue beads as a birthday gift.

Carol received a glass pendant that opens up and she put a butterfly in it for now. How sweet! 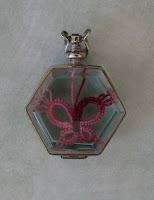 Eva's annual meeting of Swedish Tatting Guild was busy so she did more talking than tatting. 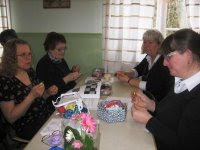 Sherry is giving away a free skein of 100% high quality SILK hand dyed tatting thread (HDT) in celebration of her 50,000th unique visitor.
Wally tatted up an assortment of Jane Eborall's earring pattern and then did a modified version to create a pin. Jane Eborall's technique was used for these sequins, then Wally adapted it for smaller sequins and added some beads. She plans on making it into a hair pin. This simple flower is made by joining the sequins in the ring with picots between them and then a tatted chain forms the petals. 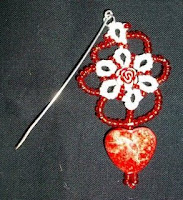 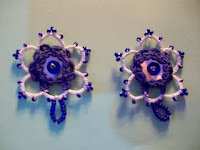 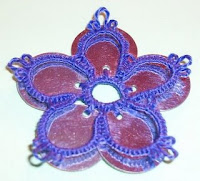 The shamrock that I tatted that is featured on this post makes my 25th motif for the challenge so I have completed round 1!!! WOO HOOO!!! I'm starting over so stay tuned! :)