Shirl has tatted an edging in white DMC 80 from “A New Twist on Tatting” by Catherine Austin.

Chiara created this lovely flower with variegated orange thread size12 She calls it a tulip but someone else says it also looks like a poppy. Either way it's pretty. 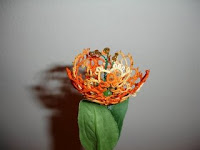 Linda tatted the shamrock pattern found in the tatting calendar by Susan Taliaferro. 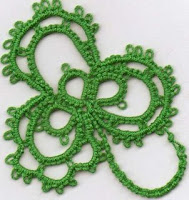 Krystle tatted this motif from the Boucher book a week and a half ago and I think we might have missed it. Here it is amid some other tatting goodies in it's permanent home, carefully encased I an acrylic coaster. Beatrice from Iris' book Tatted Doileys has finally been finished and blocked into shape, or as Krystle says, convinced. TIAS is being done in Lizbeth, the variegated is called carousel #112, and the purple is #682. Mary Konior's Spinning wheel Glass Mat from Tatting with Visual Patterns done in Countryside Lizbeth.Ruth Perry's Shamrock pattern available in the Celtic Tatting yahoo group was done also in Lizbeth thread 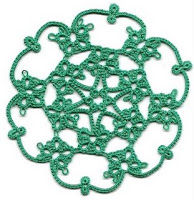 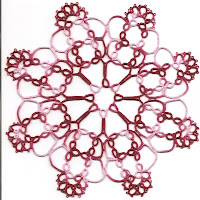 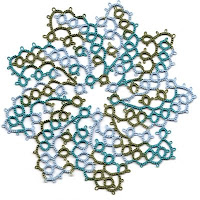 Christine taught herself how to do SCMRs and tatted the Flowery SCMR Bookmark from Jane Eborall's page.

Hye-Soon has completed a number of tatted crosses in HDT. She has also made Sherry's fish with a pearl eye. Here's the cross she was working on, I believe it's one of Mary Konior's patterns. 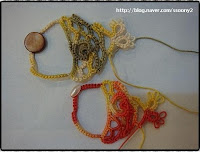 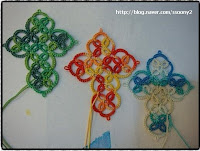 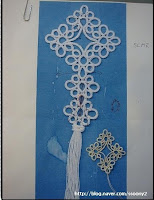 Patricia shows us some motifs she made using HDT with plans to create a sweater. The HDT ran out at the most inopportune moments and the motif resulted in a lot of ends that need hiding.

Vinnie has taught her niece how to tat, and she's already got her make picots, join rings and make a chain. The TIAS is done and looks wonderful 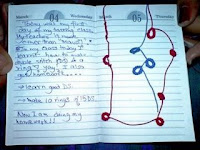 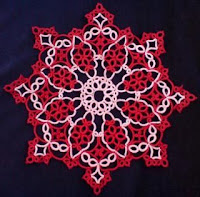 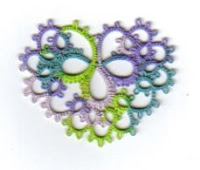 Ellen finished TIAS but found a mistake. The design intrigues her so she may use it for something else. Ellen is in the Extreme Tatters round robin and she is working on the periwinkle bookmark she made for an earlier robin but admits that it is difficult writing out a free form design. 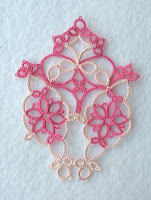 Iris shows us the progression of her designs. The shuttle motif with the added edging was intended as a collar but it rounded too much for an adult collar. The second version with a different motif in the upper middle rounds right. Then she thought it would be a nice doily, but she lightened it up a bit and made it bigger on top of the squares. Initially she put daisy flowers on top, but then thought it would have made it harder to follow the TIAS. There was a slight correction posted to the TIAS. For the beginner class in Berkeley she made this bookmark which is "the key to tatting". Then she also made a second bookmark with advanced techniques, which she cut and gave away like in this drawing. Ellyaine Hutchinson, one of her students in Berkeley sent her the picture of the advanced bookmark. She also designed this other edging with advanced techniques, but they didn't do this, although some of them also learned how to make a cluny leaf. 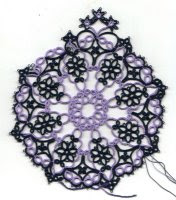 Anne shows us her first tatted project with beads; the Snowflake 2004 by Jane Eborall. I couldn't imagine that the first bit of this was going to be Knot Garden, a pattern by Heather Priseman. 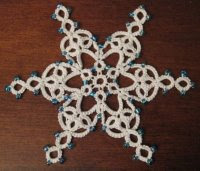 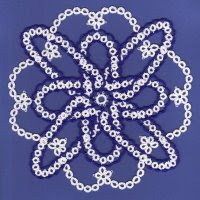 Carol tatted Marilee's Shamrock and made it into a pin, then she tatted a Carnival pendant from her book "Boutique Tatting"using Manuela thread and measured it so she could do it again in some of the HDT. 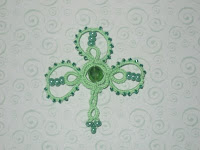 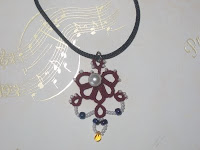 Diane made the Daffodil Doily from Learn to Tat by Janette Baker in size 20 Knitty Gritty from Marilee. 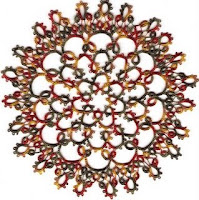 Joy used the new size 20 Lizbeth thread from Handy Hands which she received in a thread exchange on the round robin for beginners pattern from Georgia's site. The addition of a few beads makes a nice decoration. This cute little bookmark made from the straight edge of the pattern for Hen & Chicks Cross was made with Altin Basak, size 50, another exchange thread. 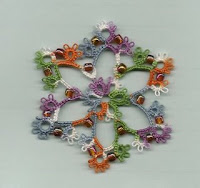 Jeff has been working on his mixed Tatting and Teneriffe Lace. He had planned on making a doily with 7 motifs but when he got this far he realized that since it's already 10.75 inches long and 8 inched wide it would be larger than anticipated so now he's wondering how to proceed. I think it looks good as is. 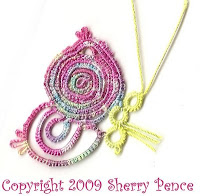 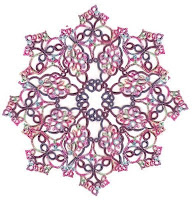 Wally finished Iris' TIAS. She used part of the design to create a free standing motif that she plans to use as a pendant. She used the left over thread and lots of beads to tat motifs from a Russian book called "Frivolite" that she plans to use as pins on her head scarf. Then she played with some red thread and beads to make some more to go in her Etsy shop. She loves making Marty's butterfly and has plans to play around with it in different colours. This blue motif with silver beads is from a Spanish tatting booklet called "Maravillas en Frivolite" but it needs a beaded tassel and she's running short of silver beads. Following Jane's lead Wally has been playing with buttons and beads to make this lovely green piece. 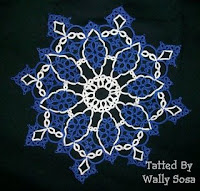 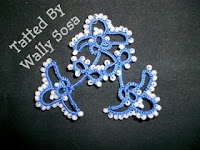 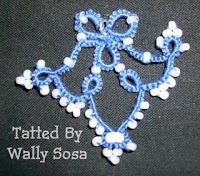 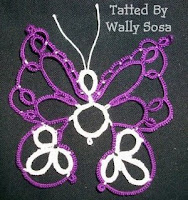 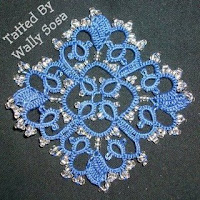 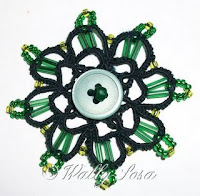 Wow! This have been a whooping update! So much eye candy! Everything is gorgeous.

Wow! Sharon, I agree with Wally! Thanks for all the hard work you put into this! :)