Ancolie show us a funny face and asks is it primitive art or just tatting supplies? The two doilies are for a shuttle box. She made a modification of one of Mark's patterns, but the result wasn't as good as she expected. 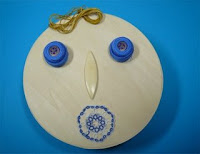 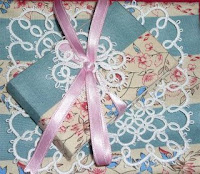 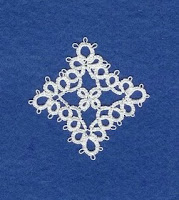 Wanda re-did Bob's Coily in Manuela size 10 thread and added another round in the spirit of the original to create an 8.5 inch doily. It works for me! 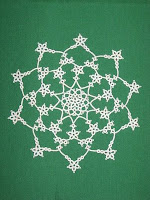 Carolyn shows us the Tatters Round Robin for Beginners by Georgia Seitz done in an unknown thread. 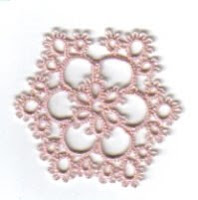 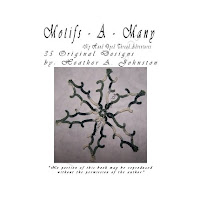 Kathy shows us a picture of her first attempt at 2 shuttle tatting, a snowflake that she photographed and used used for her Christmas cards in 1990.

TattingChic is contemplating a pink feather tree to display her tatted ornaments. What do you think?
Nita received back her needle felted teddy bear with it's tatted accents from Piecework magazine along with a tank you card. 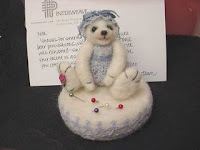 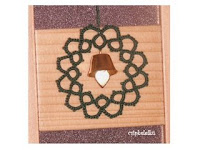 Joy has worked out the thread sizing and pattern to do some tatted hanky edgings. It's what I call auto pilot tatting where you can tat along without really having to think about what you are doing.

Carol and Rebel are sporting Christmas hats with tatting. How cute!
Laura has tatted Jon's Quantiesque Snowflake in Pamela's Coral Reef HDT in size 20 with the solid blue to match for round 2.
Marilee shows us some tatted snowflakes with embroidered cloth centers she did years ago and a deep dark "Midnight Oil" HDT crafted into a new necklace design. Both are dramatically elegant.
Pamela has tatted "Minaret" in White, Rainbow Bright and Rainbow Bright with an orange centre.
Riet's guild member, Tine Vedder has created a nativity set in tatting and bobbin lace using patterns created by both Ineke Kuiperij and Jana Novak. Riet has posted the picture of it on her blog.
I was sent some pictures of gorgeous tatting done by Patricia Estrugo and it's something you have to see to really enjoy it's beauty.
Sherry is down with some kind of flu, but she did get some lovely thread winders from Laura and she share the picture with us.
Snowy was working on a tatted doily in England and she's discovered a couple of mistakes she's too lazy to fix. It still looks pretty. Her wrist was fractured in the fall and she has to wear a splint until mid January. Since tatting is out she's started a bobbin lace piece.
Posted by Sharon at 12:30 PM