If you stop by this blog very often, you will probably know that a few years ago some tatters got together and decided to challenge themselves to tatting a bunch of motifs in a set period of time. We kicked around some almost impossible numbers of 100 in a month or 25 in a week and then some saner people wanted to join and we revised our crazy numbers to something more attainable for real people living in a real world with jobs and families and real lives. We settled on 25 in a year.
A challenge like this is somewhat interesting to the participants, but more fun if each person has a little show and tell of what the are working on. In fact with some interesting eye candy, it becomes fun even for those who are not participants. When you collect all the eye candy together in one place then it becomes an amazing display of the tatted laces of a whole lot of talented people.
Collecting all of that eye candy and making reference to it in a way that makes sense for people just browsing the internet takes time. A lot of time. And dedication. There are over 60 people currently involved in the 25 Motif Challenge. Each blog has to be visited, pictures have to be copied, information has to be read, details have to be recorded. Maybe it takes 5 minutes. For 60 blogs. Let's say a quarter of them have new tatting on them. Do the math. It's over an hour just to get the details. Then post the details. Spell check. Add some pictures. Wait for them to process. Add some more pictures. Wait for that batch. Add some more. Wait some more. Add a link, colour it. Add another link. All more colour. Shift some pictures around, delete some spaces. There's another hour gone. 2 hours. Minimum.
Keeping the 25 Motif Challenge page up to date so that it's fun for everyone who stops by is a lot of work. The team that keeps it running smoothly work very hard to keep things fun, just for you. Thanks go out to Clyde and Laura who have worked extremely hard at keeping things up to date and Jeff and Aileen who have done updates and are also group leaders in the round robins. My thanks and the thanks of all the tatters who visit the challenge blog for all of your hard work. We all appreciate you and your dedication.
If anyone else thinks that they have some time to spare on a regular basis you are welcome to join the update team. We can never have too much help because the more people we have helping out, the less any one person has to do.
This is Ancolie's 3rd entry, a red snowflake done in DMC 80, pretty and delicate. 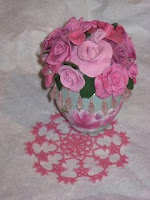 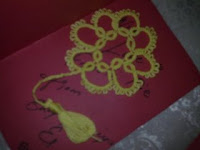 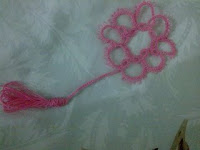 Carol's William, that she received last year, is going on a road trip to visit with the other leprechauns coming over from Ireland and he's packed up lots of HDT to take with him. 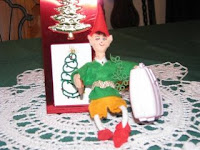 Bonnie has tatted Tabatha by Kersti Anear in DMC size 80 red thread for the round robin. She took a break from working with the finer thread to make Mike's snowflake. The words "I want a hippopotamus for Christmas" in a song prompted this fabric Christmas card tatted in Sherry's size 20 Coffee and Cream. 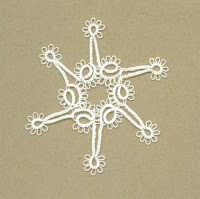 Iris saw this beautiful motif on the internet and to her delight it was in the wonderful Japanese book from Teiko Fujito that she bought. She has tried working it in wool and needs to make a few adjustments to allow for the change of medium.

Bhavani tatted this motif from the book "Forty Original Designs in Tatting By Nelli Hall Youngbery" that she downloaded from the Antique pattern library. Now that she is familiar with the pattern she'll try it again in one colour. 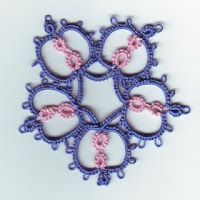 Eva's double bobbin shuttles are in hiding so she worked this bookmark using 2 shuttles held together with a rubber band. With or without the right shuttle the bookmark is pretty. 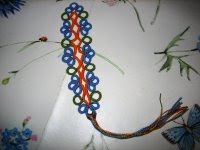 Anne shows both sides of the motif September Serenade, designed by Leonore English.

Connie posts both the crochet doily and the tatted version that Wanda did so that you can see them side by side. I like the tatted one better. 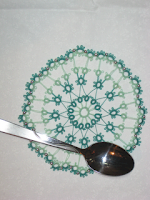 Jeff has tatted a snowflake is called "October Enchantment" by Lenore English using DMC Cordonnet size 30 thread for the round robin. The next snowflake is one designed by Nancy Tracy done in DMC Cordonnet thread size 30 and it came out 4.5 inches which was too big for the round robin so it will become a Christmas gift. The third snowflake is Ruth's Celtic Snowflake 2008, this time done in Marilee's "Winter Blend" HDT in size 50. Finally we have another of Teri's turtles done in C-lon Micro thread. 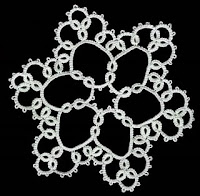 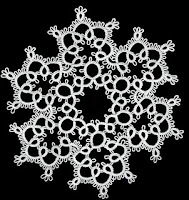 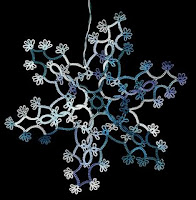 Martha received Danny, one of Pamela's leprechauns completed with his bit of tatting. He came with a skein of Rainbow Bright HDT. Martha has been hard at work making lots of Jane Eborall's Sequin Snowflakes to give the girls at work. She prefers the heavily beaded version of the pattern, but needed the simpler version to get it done in time. We can all appreciate that. Mike Meloy's snowflake in size 20 thread is a quite nice one round snowflake that works up fairly quickly, but has plenty of visual interest. Martha thinks that showing us lots of snowflakes now might cover up that fact that she missed the deadline. Shhh! , no one's counting. 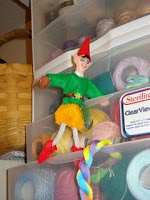 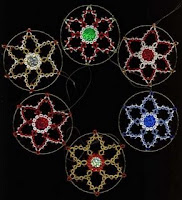 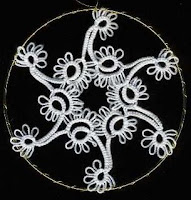 Clyde is busy tatting, but away from home nursing his partner's father as he recuperates from knee surgery.
Diane just HAD to use the Country Christmas HDT Sherry sent her to tat 2 sweet Mini Tats.
Cormac arrived at Gina's place from Pamela in Ireland along with a rainbow bright snowflake.
Joyce has been doing lots of beaded snowflakes. I told you tha pattern was addictive.
Laura has all of her colourful snowflakes laid out for stiffening they looks simply scrumptious. Go look! It's worth it just for the visual feast of colour. Oisin has arrived from Ireland and he's quite at home among all of these pretties. He came with a beautiful handmade card and one of Pamela's Rainbow Bright tumbling snowflakes on the front and a skein of Coral Reef hand dyed thread.
Marilee looks like she's having a great time at Discovery World 2008, where her booth sports lots of HDT and her gorgeous jewellery. She sold an assortment of things and had a couple of people sign up for tatting classes.
Mark shares a couple of half ring braid patterns, (one is a candy cane) and his newest treasure - a spinning wheel.
Marty has added tatting to some satin covered Christmas balls and turned ordinary into spectacular. She used gold pins pushed through red beads to hold the tatting in place. What a clever idea!
Pamela shows us how she stiffens her snowflakes, complete with product pictures.
Sherry has tatted a Peach tree with size 20 silk HDT "Harvest Moon" and "Rainforest" and cotton HDT "Dark Chocolate". She used the "dimpled yorkie" technique for the leaves and split encapsulation; a technique that she will be teaching at Shuttlebirds in April of 2009.
Posted by Sharon at 1:41 PM

Thanks for all your work, Sharon! And thank you to all the team members, too! It is such a nice way to see other blogger's tatting that I might not otherwise and it is kind of rewarding to see your own work mentioned on another blog. It's kind of validating! :)

I wish I had more time to help out, but I do not!

Thank all of you for all the work you put into this site. It's wonderful. It's great to come to one place, see neat things and be able to go to that person's website and see more wonderful things.
I don't have time to help out, either, I'm sorry. Just know that all your hard work is appreciated!

I appreciate all the hard work each of the team members contributes. Computers have certainly opened up a whole new world to all of us, but the work involved is time consuming! I will try to help beginning this summer, when school is out. Maybe if I learn the basics when I have free time, I'll be able to continue when school starts. Working with the team sounds like a challenge I would enjoy... I do need to keep improving my computer skills!

The best part about this blog... I've met wonderful tatters and have been inspired by their work! Thank you, everyone!

The Update Team Members are the greatest! They've more than saved my sanity. I appreciate them more than they will ever know.

MANY THANKS, from the bottom of my heart... to all of you!
1) To those dedicated people giving of their time and patience (if I know how computer things go) to keep this 25-Motif Blog up to date!!! Deeply appreciated!!!
2) To everyone who takes time to share their beautiful and inspiring tatting!!! Also deeply appreciated!!!