Batty Tatter made the snowman and angel as gifts for friends the snowman's hat is one of Jane Eborall's patterns. She saw the bow and bells online and couldn't wait to give them to a friend. 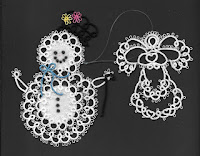 Melanie realized that she has too few ornaments and she's been working her way through the patterns in Nadine Nunelly's book. She's been enjoying seeing how the lace behaves as she attaches it to the ball and knows that the people she gifts them to will enjoy them for years to come. 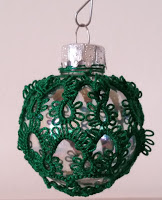 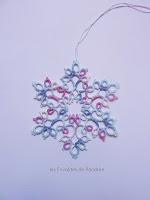 Linda used a tatted wheelbarrow filled with silk ribbon flowers and an embroidered butterfly in a mixed techniques block. 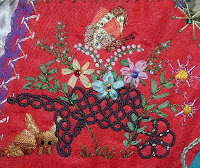 Grace used Rainbow Taffy Lizbeth thread size 40 Rainbow Taffy to tat this Kersti Anear pattern. She found this collar the Museum of the Confederacy, a sample of the lace women smuggled North to sell because there was no money in the South. This is a tea towel with a cross stitch band where she sewed on a teapot from Pam Palmer's book Tatting Treats 3 and Anne Bruvold's Square Star using size 12 Sulky Blendables. This lovely vintage star doily pattern is from a 50's Workbasket which she tatted in Lizbeth size 40 Rainbow Taffy with coordinating green thread. Another Square Star earring set she made this summer also in Sulky Blendables size 12. She found this amazing blended thread, cotton with a metallic twist, size 10 Garden Metallic by Nazli Gelin, which she used to tat the left snowflake from Lene Bjorn's book 24 Snowflakes and the star on the right is from Monica Hahn's book. Due to a repetitive motion injury she won't be tatting anymore of Lene's snowflake for a while, so she's keeping this one which is hard to photograph to show the sparkle. Both  of these next snowflakes are from Jennifer Williams' snowflake book with the yellow/gold snowflake done in Aunt Lydia's size 10 gold with a metallic twist in it, and the blue one is the Garden Metallic with a silver twist. The following pattern is from Lene Bjorn's snowflake book and the thread is size 60 Sunlight Oro from Edda Guastalla's shop in Italy 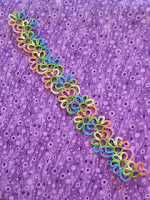 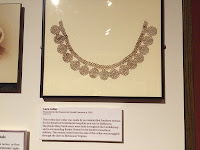 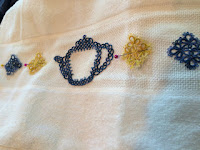 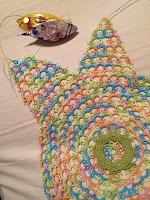 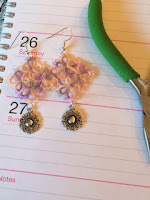 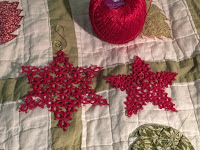 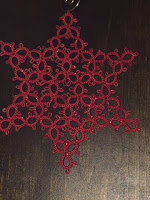 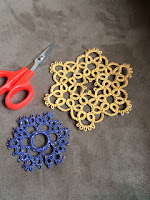 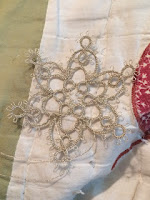 Diane finished the third section of the last round of my Jan Stawasz Masterpiece which means only seven more to go. She's very happy that she has managed to tat around four of the ten motifs. She's now half way around and it looks like it won't be finished by Christmas, but soon. 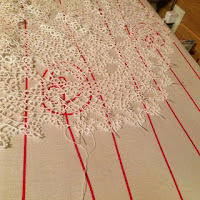 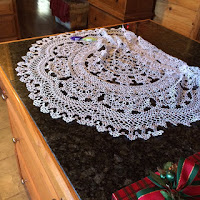 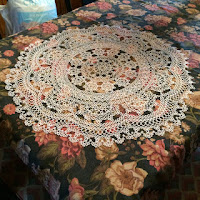 Fox has completed about half the border for the hankie, in just a few days, as opposed to the months that the hedgehog was taking to tat. She contacted Lea to buy 2 more skeins, both in #50, which she used for the previous hankie. She downloaded a pattern from a Russian site which looks suspiciously like a Jan Stawasz design with fuzzy numbers, but she has filled in the numbers according to her understanding and hopes that she has enough thread to work it. Here's the design tatted with Karey's #40 HDT and DMC #60. 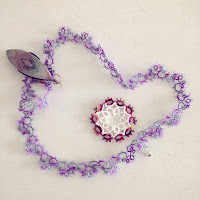 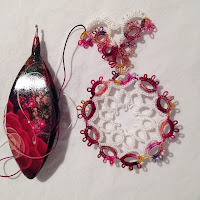 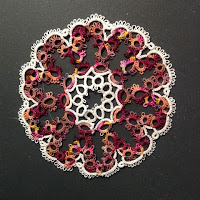 Lilas created a classic bracelet pattern which is simple, classic and elegant.

Margaret went for angels for her December challenge and tatted Sharren's Angel from Tatting with Sharren blogspot. Next she used two angels off a pattern sheet that was posted on pinterest on a page that has the name Patrieia Pirocca 14.4.24 on the page, but only one of them worked out nicely. 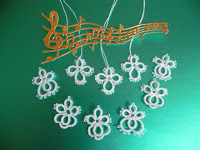 Marie added some tatting to the zipper pull on a bag she got at the craft show. She named these earrings Arctic for their icy colouring. She did an exchange with Hudy, from the Needle Tatting Forum and shows the goodies she received. These Mossy earrings were tatted around old clip earrings. An old single clip earring was tatted around to make a Rosey pendant. 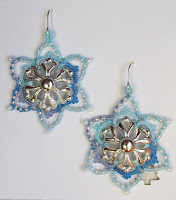 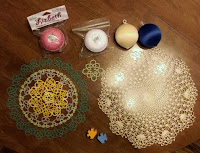 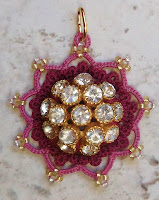 Muskaan has created her Sparkle snowflake and uploaded the pattern for others to try. She has posted step by step instructions for how she tatted Eleonore Endrucks Li’l Angel with a variation for a 3D halo.
Sometimes variations of existing patterns just seem to pop out while you're working on them. 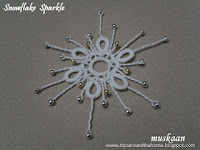 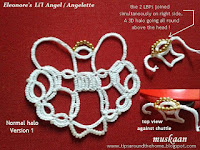 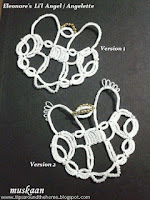 Stephanie has been tatting but not taking pictures. She did get pictures of these 15 pairs of BEANILE Lace earrings which are intended as Christmas gifts. 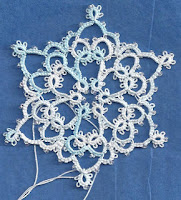 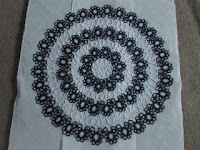 Can I join the challenge? I'm going to try to post more and there's nothing like a commitment to get things done... :) I'm at http://laceandbees.blogspot.com/