Elsa is tatting, but it's a surprise.

Claire tatted this celtic motif from Rosemary Peel's Tatting For Pleasure in very dramatic black and red DMC pearl cotton size 8 colours 310 and 498. She loves the look of the design which is just as charming from the front as the back. She made a pendant of the design using Lizbeth size 20, in Ocean Sunset # 155 and black # 604. 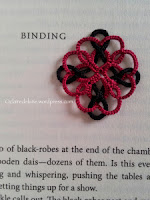 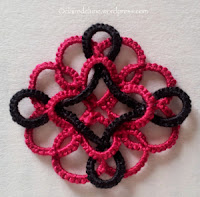 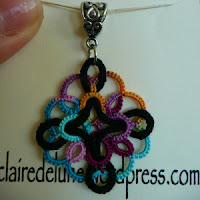 Diane has tatted around two of the ten sections on the last round of my Jan Stawasz Masterpiece doily. Diane loves using thread markers as it helps her keep track of the pattern and help her see achievable goals, while adding a spot of colour to her plain white doily. 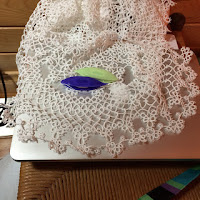 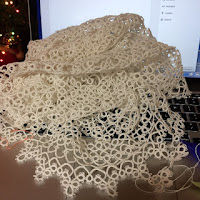 Fox finished the Jan Stawasz doily and in Lizbeth size 80 it measures 8 inches across. Fox is making an early New Year's resolution to only tat patterns she likes with threads she likes and consequently the Hedgehogs pattern is gone. In it's place is Lea's lovely #70 thread using an unidentified Russian pattern from who-knows-where. She's now tatting herself happy loving the thread, the colour, the pattern and how it goes with the hanky. The teeny, tiny, one inch pretties from Ninetta are being left out to remind her of the perfection that can be attained. 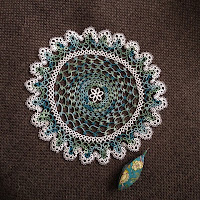 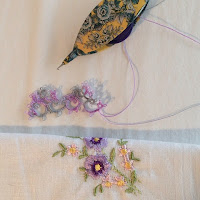 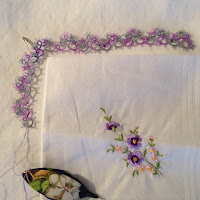 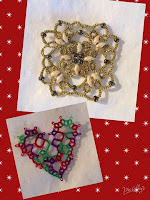 Margaret has trouble tatting with really fine thread, so she had to wait for days with bright sunlight to tat the butterflies, which are done in PQ (Perfect Quilter) #063 that Fox sent her. The white part is done in Lizbeth white size 20. 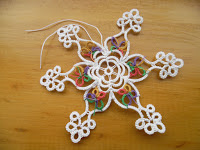 Marie made these Ocean dragons using a strand each of green and blue rayon sewing thread. Her tree has only a few tatted decorations but she plans to tat more for next year. Amethyst is a pendant she made from a broken necklace. 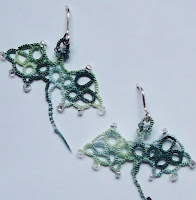 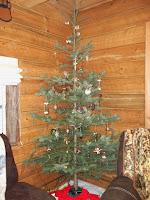 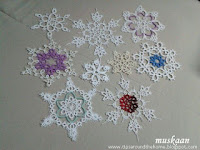 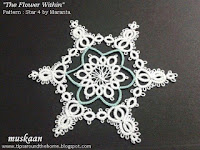 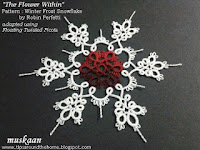 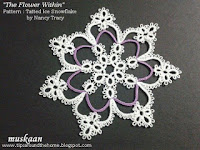 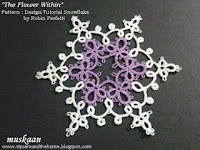 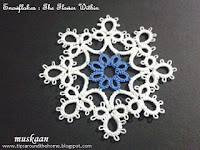 Sue tatted this design from Elaine P. Gan in size 20 Lizbeth Christmas Delight with tiny red glass beads to make a Christmas bracelet. She used a toggle and ring to finish it off because it looked like a wreath. 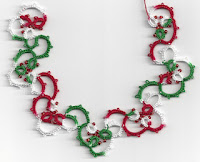 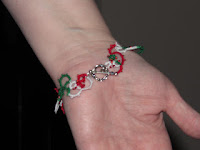 Wanda has plans for another table runner but the appearance of the finished lace isn't always like the thread wound on the ball so she thought she'd make some colour samples first like this one done in  Lizbeth thread size 10 in #606 Charcoal & #602 Natural. It doesn't go as well with the fabric as she had imagined. Neither did these samples she worked up, but better to scrap a few short samples than a whole length of edging.