Sarah has decided to join the challenge and begins with this motif that is part of Elgiva heart from Martha Ess' book Playing with Picots. 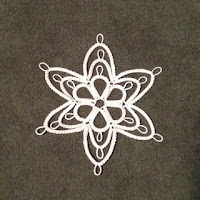 Batty Tatter made this butterfly without the pearls from Shabby Chick Tatting by Rozella F. Linden and didn't realize until she saw it in daylight that she'd used two different shades of white.

Julie used Lizbeth 20 White with Miyuki 6 mm bugles and 8/0 seed beads to tat Ice Queen by Joëlle Paulson. She's made the Heavenly Snowflake by Joelle before in a variegated thread, but did it again, this time in white with beads. 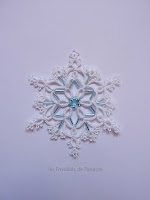 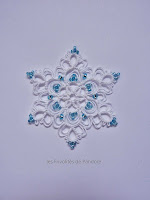 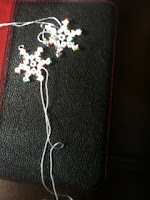 Nancy shares her tatted Christmas tree along with wishes for a Merry Christmas.

Fox has a handle on the ins and outs, ups and downs of this Land of Laces piece which she's working in Lea's #50 thread. She's down to the cross your fingers and hope there's enough thread on the bobbin working on this edging. (Been there, done that, scrounged through the scrap bin for enough to splice in and finish!) TA DA! There was enough, and now another lovely hanky is done. 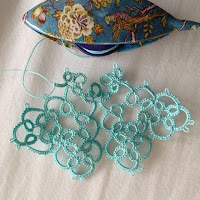 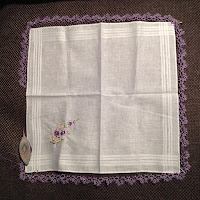 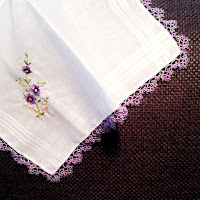 Jenn shares a collage of tatted snowflakes and motifs with wishes for a Merry Christmas. She recently purchased some beading needles that allowed her to finally attempt Corina Meyfeldt's Snowflake. Now she's thinking of buying more bugle beads so she can tat more. This cute flower motif by Jennifer Williams let her finish her personal challenge of 15 in 2015.

Lilas is thinking her To Do list has become unmanageable, but she did get this white lace and pearl necklace done.

Marie made this bracelet by C-M Handmade and had enough thread left over to make a bookmark. Then a little left over thread made a zipper pull. The last bracelet was given to her sister, so she had to make one for herself. Of course what is a bracelet without earrings? 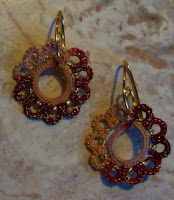 HisKid just had to get some tatting in and chose to test tat one of Elaine P. Gan's bracelets in size 40 Kaleidoscope HDT, although she may use it as a bookmark instead.

Wanda's Christmas wishes are shared with a tatted snowflake and button ornament. Wanda tatted the plane on the right a few years ago and the friend she gave it to had it hanging on the wall looking a bit droopy. This year she tatted the one on the left and mounted both of them so that they can hang proudly on the wall. She had requests for the button ornament patterns and she has posted a few of them on her patterns page. 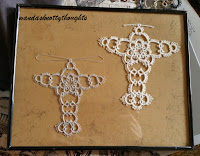 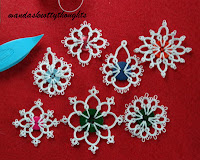