Mary Lena has created a delightful necklace in a silky grey thread with hematite beads. 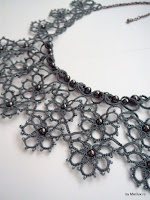 Diane has only three motifs left to tat around on this round which is growing more and more slowly. Round 13 of her Jan Stawasz Masterpiece doily is done. 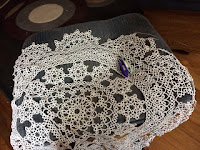 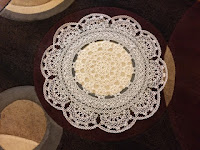 Fox is tinkering with Armenian lace and hasn't had a lot of time for her tatting, but there is still progress on her doily. She's almost finished with the small motifs in this round. She finished the round and started the next, but didn't like how it looked and cut it off. She used some HDT by Yarnplayer for this motif from Tatting Patterns and Designs to give her a break from the Jan Stawasz doily. When she went back to it she worked on the next row which is almost finished. 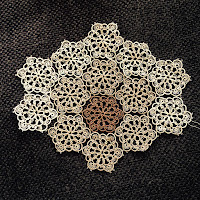 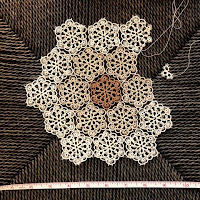 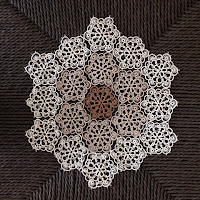 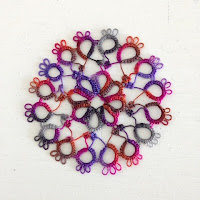 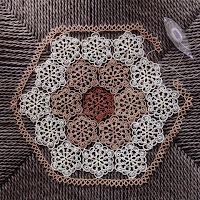 Lilas tatted these deceptively simple earrings with size 100 OEKO-TEX thread! Very, very tiny and with many people, it would require using a magnifying glass to work with it.

Marie created this bracelet for her Garden Collection. Some changeable earrings created to go with the set. The earrings inspired this pendant which would also make an excellent Christmas decoration for her small tree.

Martha shows some of the zany fun at Palmettos and a traditional trading of an ugly poncho covered in tatting. 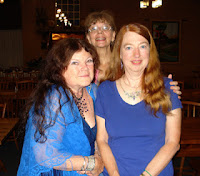 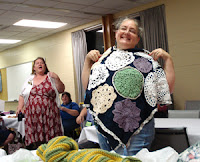 Muskaan is tatting Renulek's Snow Doily because it incorporated a lot of things she wanted to try. At this point she has 4 of the 9 rounds completed. A start on the next round of snowflakes has just begun. 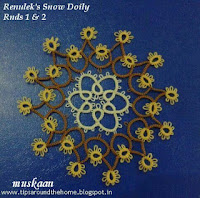 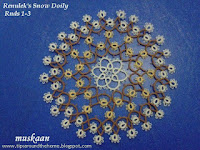 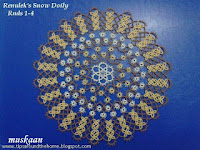 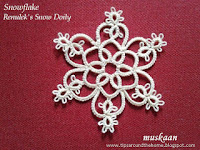 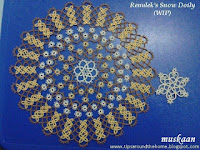 Phyllis was inspired by the projects in Chiacchierino, an Italian tatting magazine, and immediately upon receiving it, she tatted a teddy bear for her granddaughter. The tatting done for the state fair won some awards but her showing wasn't as good as she had hoped. 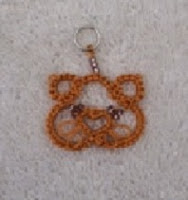 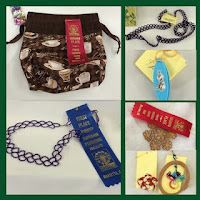 Sue is working on a Christmas gift in Lizbeth Snow White and Navy Blue. She has just finished the third of four 18 foot long garlands she is making for her friend. She's also working on a tablecloth. Not being able to sleep during a storm, she sat up and tatted this familiar cross. She has another round done on her doily which is from the Basic Book of Macrame and Tatting. 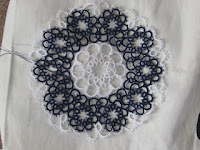 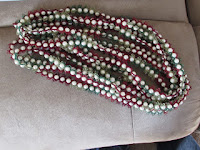 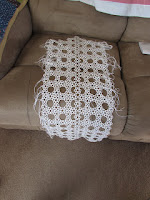 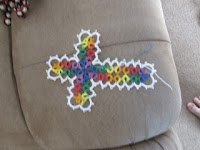 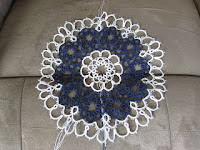 Wanda's last minute choice of a doily, won a first prize and her Autumn Pumpkin wall hanging won third. She was disappointed at how little in the way of home arts were displayed and she's determined to find more categories to showcase tatting for next year. 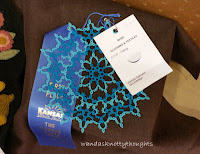