Gwen made 2 of Marie's Angels using a variation in the long chain forming the skirt called a HDD (half double double stitch)The Angel on the right, was found while flipping through Pinterest.

Lelia tatted these butterflies in response to a request for small butterflies to hand out at Annie's Craft Festival. This is a re-tat of the Leaping Lambies pattern by Karey Solomon. 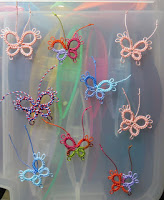 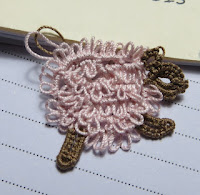 Linda used the Maple Leaf pattern by Tammy Rodgers worked in Lizbeth 40 joining 8 maple leaves together and attaching them to a small white doily with one more in the centre to make a Maple Leaf Doily. 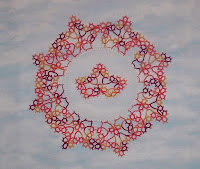 Claire tatted these earring from a pattern by Sumi Fujishige found in Exquisite Tatting in DMC size 8 colour 498.

Diane started round 14 of the large Jan Stawasz pattern. Here's the round after 2 repeats. More repeats done. And more. repeat after repeat gets boring at this size, but the reward is round 14 finished. Which brings us to round 15 started. 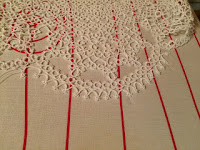 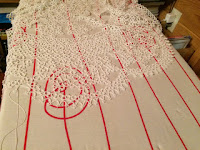 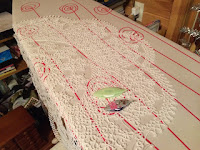 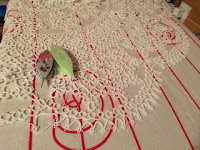 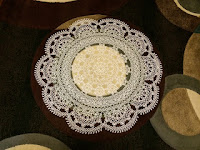 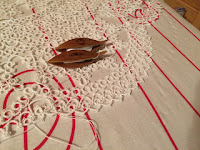 Fox tried out several colour combinations, but they just didn't look right so she settled on white. Why am I craving cafe au lait? she's been adding motifs to it. Then she took a break to tat a motif by Karey Solomon in very fine thread sent to her by Ninetta which made an itsy bitsy piece of lace. Included in the package with the thread were a couple of lovely tatted motifs. The Jan Stawasz doily needs a lot of boring little motifs added to it so it's lagging a bit. Ben Fikkert's Corona Doily tatted in size 80 Lizbeth measured 22 inches across and won first prize at the fair. 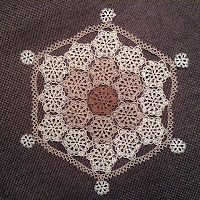 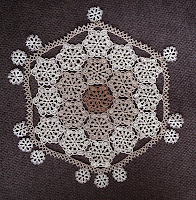 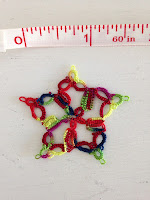 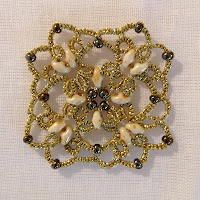 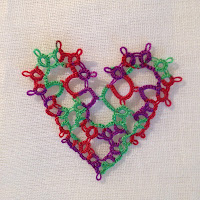 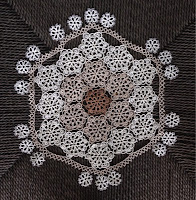 Kristen has her fair entries back and shares with us the judges comments on her lace which are beneficial for anyone wanting to improve their chances for a winning entry. 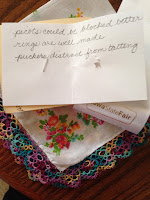 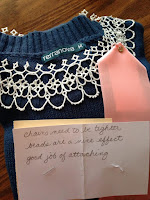 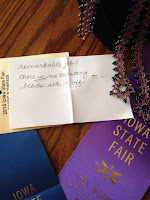 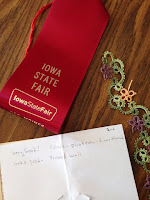 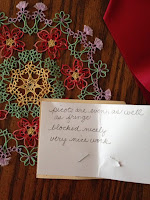 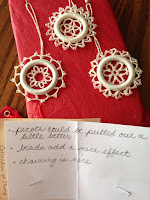 Lilas is working on a design, but all she'll say about it is that it's not a doily.

Marie's Mom machine embroidered a design on a towel, and Marie added a matching tatted edging.

Martha finished off some class projects from Palmetto's, beginning with Karey's Pendant Necklace which she turned into a lanyard. She tried out Karey's Leaping Lambie in class but early morning non-functioning brain cells didn't do it justice and she re-did it later. Another pattern she made after getting home was Erin's Flowery Crinoline Angel, to which she added a halo. 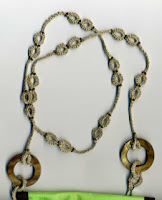 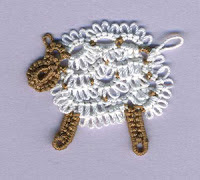 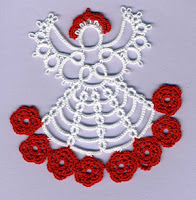 Wanda was participating in a round robin and used one of her trial rounds as a base for a tatted bag. The first few rounds went according to plan, but the split ring round was a bit too big, so she needs to adjust the stitch count there and she thinks the bare thread sections at the top are a little too long. 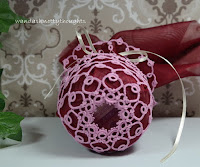 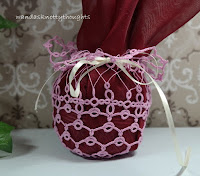 All the works are fantastic. I would like to join 25 Motif Challenge. Is it possible ? My blog is http://filofilie-frivolite.blogspot.fr