Dorota had some variegated thread and used  two colours of Toho beads and three 3mm Fire Polish beads to make these Bollywood style earrings. One set to keep and one for the store which brings her to 25 motifs. 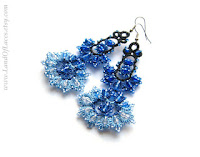 Cindy used a fabric with a tatting theme for her bag and decided that it needed a tatted motif on the tab closure. The Square Flower Motif from The New Tatting book by Tomoko Morimoto done in size 20 thread was too large, so she did it again in size 80 but it's still a little large and she's wondering if it might look better in burgundy. At least she has a complete set now. 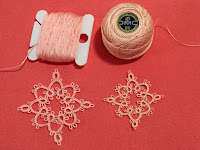 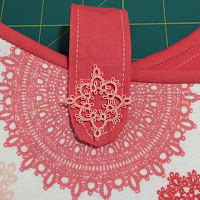 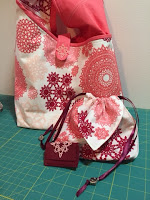 Diane did a test drive on one of the large bobbin shuttles using size 10 Aunt Lydia thread. She's almost half way through the round on her massive masterpiece doily. Still chugging along on the doily. 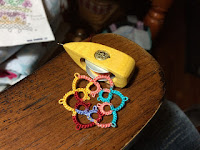 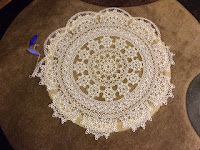 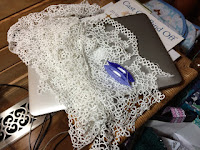 Fox found this deceptively simple design a bear to tat and eventually had to add 10 ds per ring to make it lie flat. She's delighted to announce that since she has gone with the simpler design she will have enough thread to finish the hanky edging. She has tatted this design before and likes both the look and the process, which is always a winner. Here are several motifs tatted in size 80 thread. Here's the finished hanky edging attached to the fabric and looking spectacular. 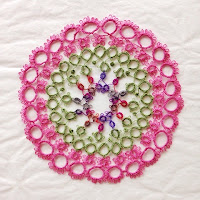 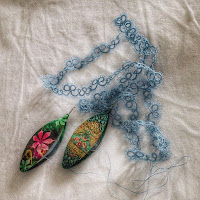 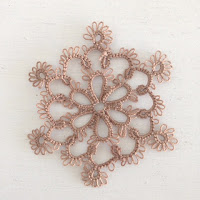 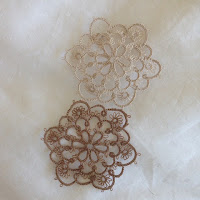 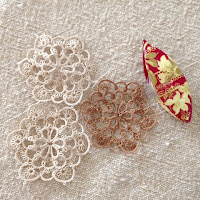 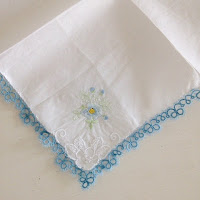 Jenn just had to tat this Double Picot Doily Motif pattern shared in a Facebook group.

Marie has added these earring to her Garden collection. 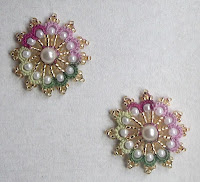 Wanda wanted to tat something for the state fair and one of the categories was an ornament, so she started with Mark Meyers, Autumn Pumpkin, added a stem and some leaves, but it still needed a little something so she mounted it on fabric with some smaller pumpkin motifs and a scroll of tatting with more leaves to make a lovely fall banner. 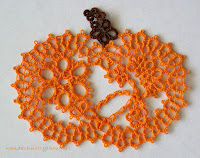 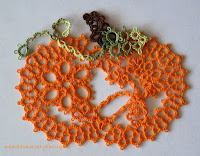 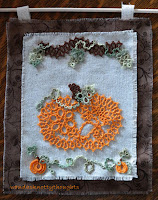