Mary Lena tatted the Cat from Inga Madsen's Tatted Animals for a friend. 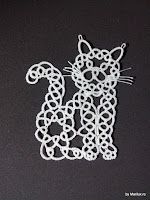 Julie learned how to make daisy picots so that she could tat this daisy picot Key pendant by Marilee Rockley using Lizbeth size 20 black and #142 with Miyuki 11/0 beads. Her next project is also a design by Marilee, a Maltese ring pendant done two different ways called Echo, done in size 20 Lizbeth colour 165 and Miyuki beads. 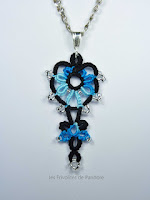 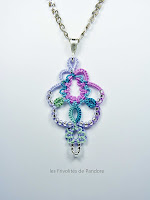 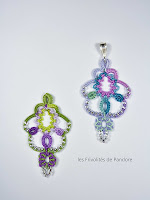 Sue has tatted this earring design so often she has it memorized. Her doily is growing but it's raining and she doesn't want to spread it out on a wet tent floor. She finished up a pair of diamond earrings. 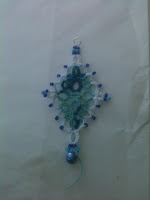 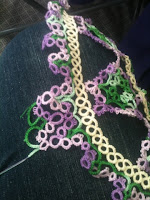 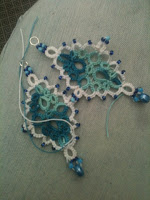 Linda needed some 'gators for her Crazy Quilt Pond and both of these are stitched in size 20 Lizbeth 138, Leafy Greens. The top Crocodile is by Jane Ebroall, while the bottom alligator is from Dianna Stevens in her book of Animal Bookmarks. She finished Round 6 on Renulek's 2015 Doily which has been washed and pinned out. 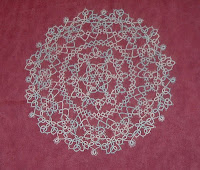 Claire's friend recently became a Canadian citizen and she wanted to make something special, so she tatted a maple leaf pattern from Tammy Rodgers in Penny 30 thread and mounted it on a hand made card.

Diane is making progress on the Jan Stawasz doily and round 12 is almost done. She recently acquired a large bobbin shuttle and tried it out on some size 10 Aunt Lydia's thread and used it to tat Mary Konior's Masquerade. 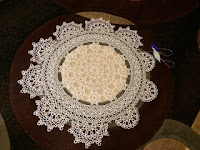 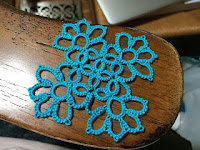 Fox finished Buttercups by Ben Fikkert using size 80 Lizbeth thread and was surprised that the thread didn't give her the usual trouble. She found a pattern on Sally Kerson's blog and she had to give it a try in size 80 Yarnplayer HDT. She started Robin Perfetti's pattern but found the Catherine Wheel joins cumbersome so she tried out another edging. She does like the look of Robin's design so she might use it for another project. 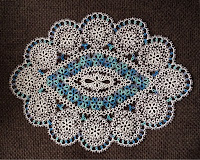 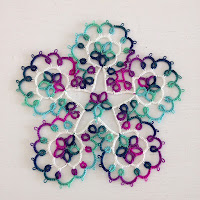 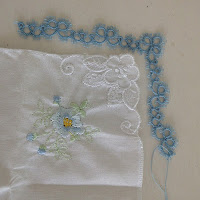 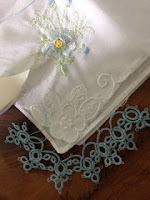 Margaret and Suzanne have challenged themselves to find things that interest them on Pinterest and tat them. She fell in love with these tiny tatted dresses from Tiny Flowers, but there was no pattern so she worked it out from the picture and tatted it in size 20 thread which was too small so she switched to size 10. 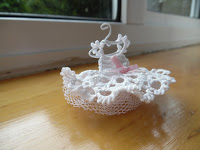 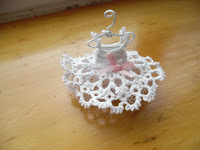 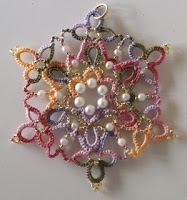 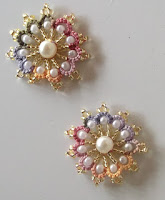 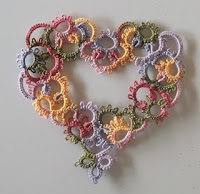 Martha can't read Japanese, but in studying the pictures in Tatting Lace Accessories by Kou Nanami, she has come to the conclusion that there are no flipped stitches used in any of the patterns. Martha's book A Flight of Angels will be available shortly and she's now taking orders for it. 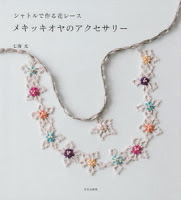 Muskaan shares a bracelet pattern called Bonds of Love. She had some motifs lying around and this was a good way to use them up. Blossoming Bonds is another design she shares which combines a layered flower with a leafy braid. 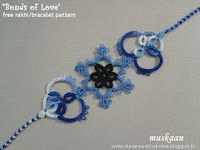 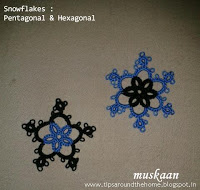 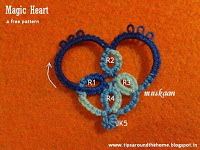 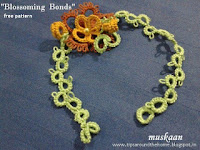 HisKid shows step by step how she is tatting the lanyard. Tatted in size 20 Lizbeth Rainbow Splash and some large beads, this is the finished lanyard. 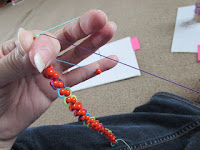 Wanda got tired of losing patterns, especially the ones she designed herself, so she decided to compile them into a booklet so they'll be harder to lose.

Hi Sharon,
I just wanted to inform you that I have completed my 2nd challenge & am working on the 3rd (3 or 4 motifs already uploaded, including the rakhi bracelets above). I enjoy the challenge and also the tremendous creativity showcased by you.
Thanks :-)