Linda has done an awesome job on this CQ block that's so full of embroidery it's hard to see the tatting, but the dragonflies birds and butterflies are in there. 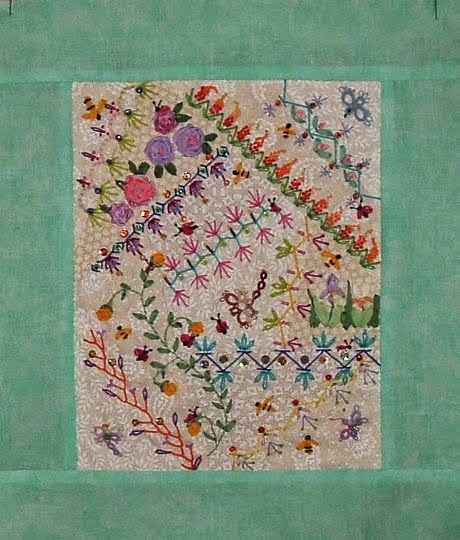 Diane was in the mood to work on her Jan Stawasz doily, but had to stop and fill her shuttles, so she didn't get as far as she would like. She did get a little more of the Purple Splendor Spinning Wheel Glass Mat done. One more day and a bit more accomplished on each doily. Another day and a bit more on her "Masterpiece" doily. 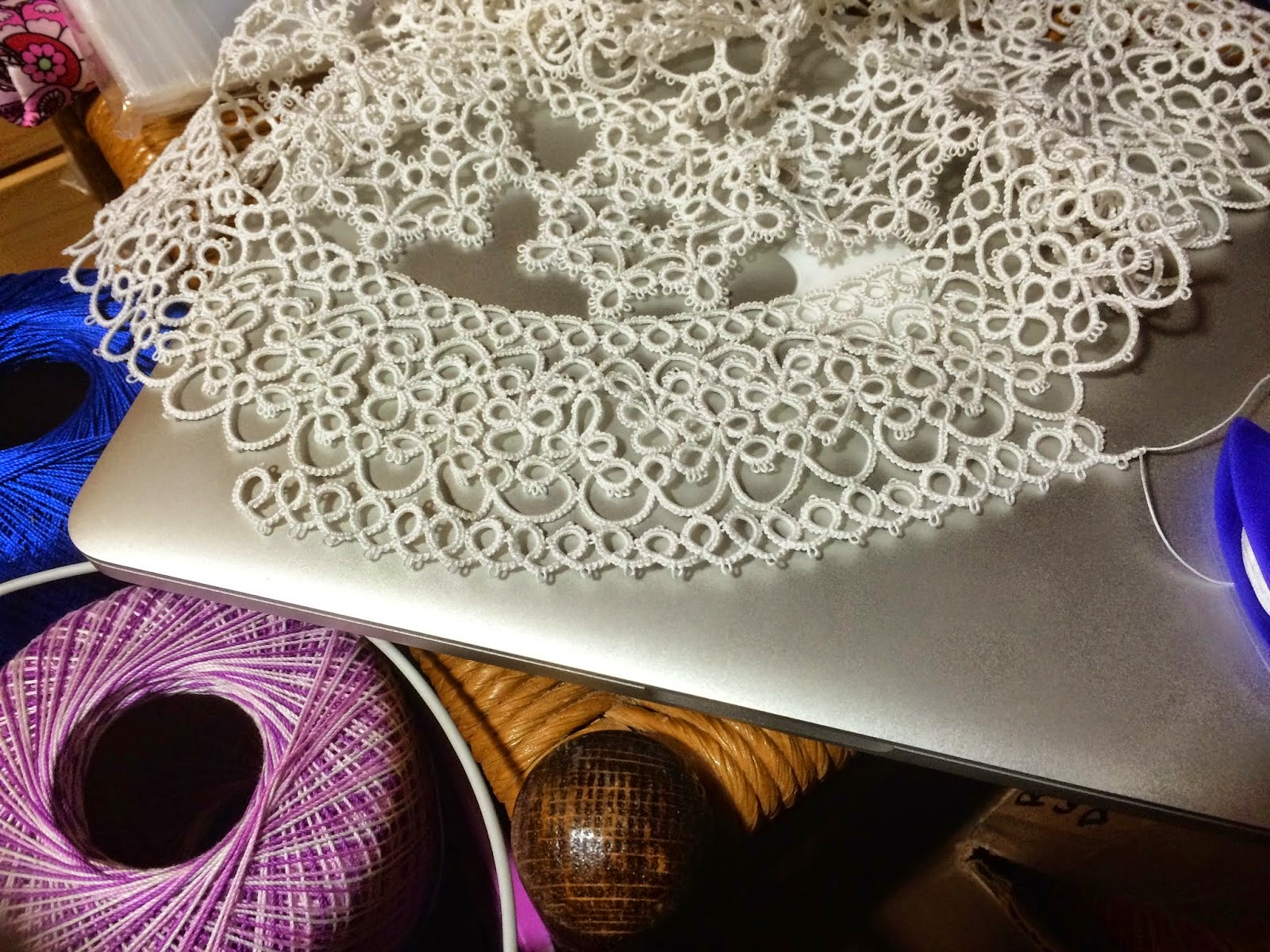 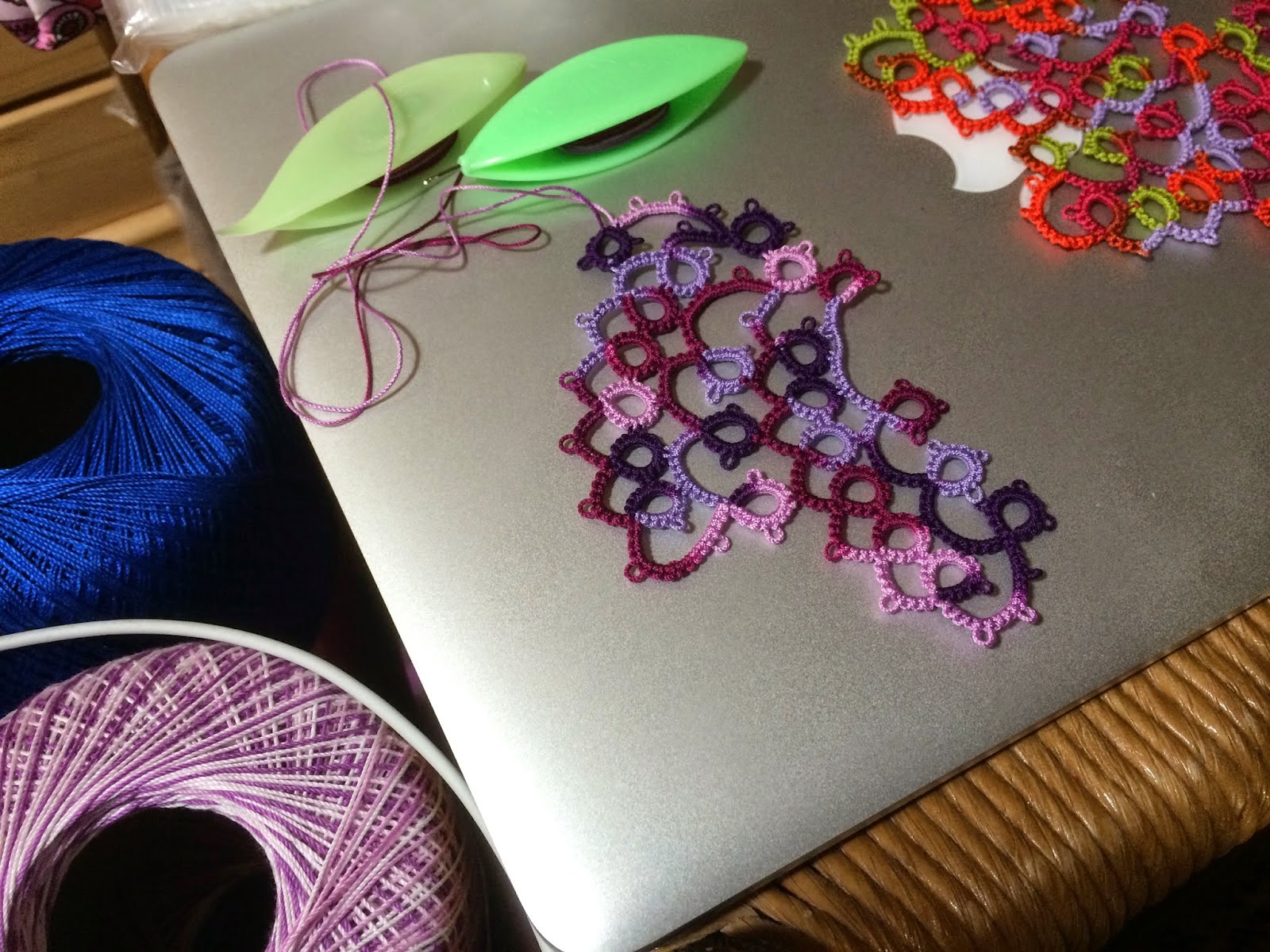 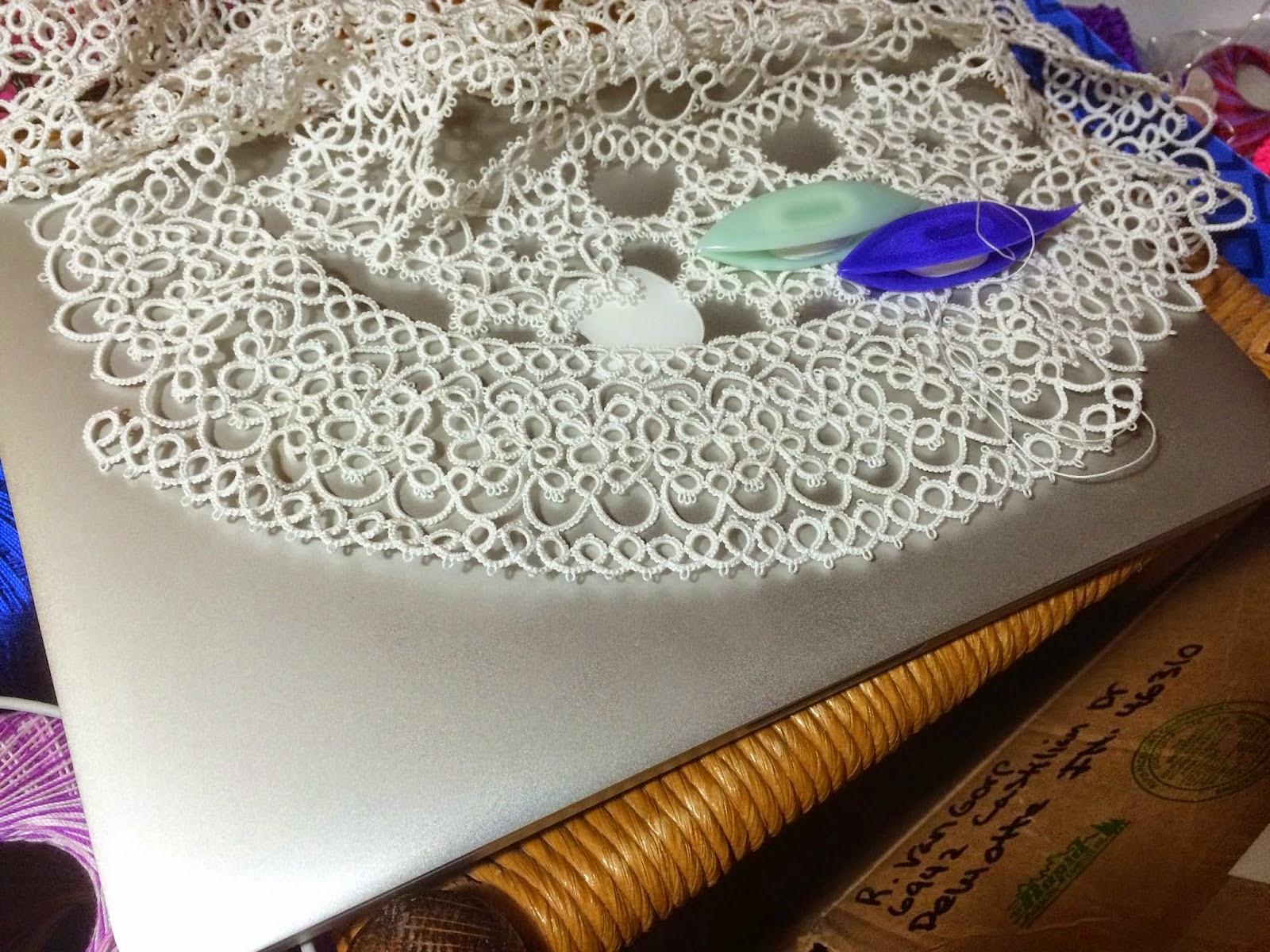 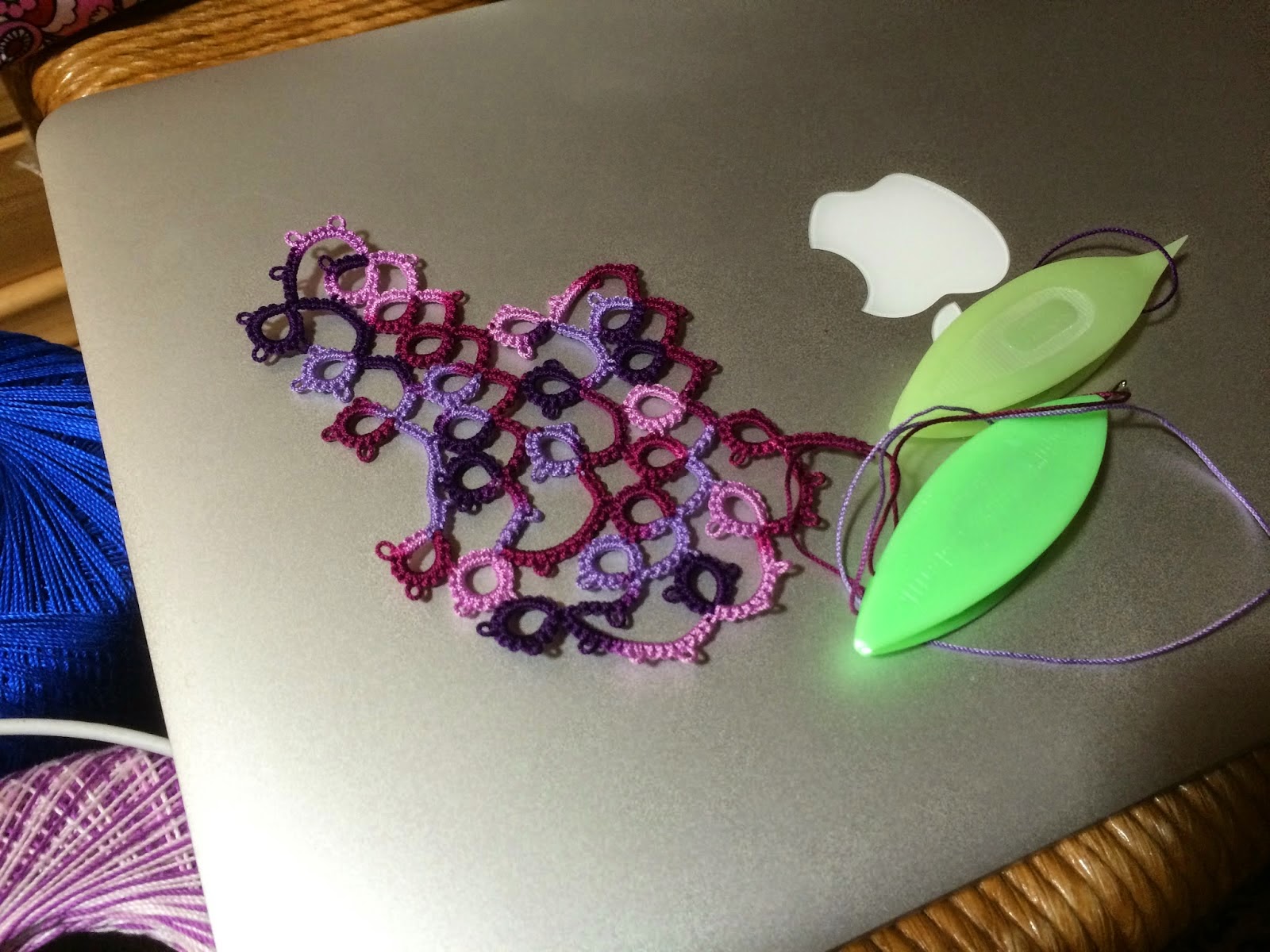 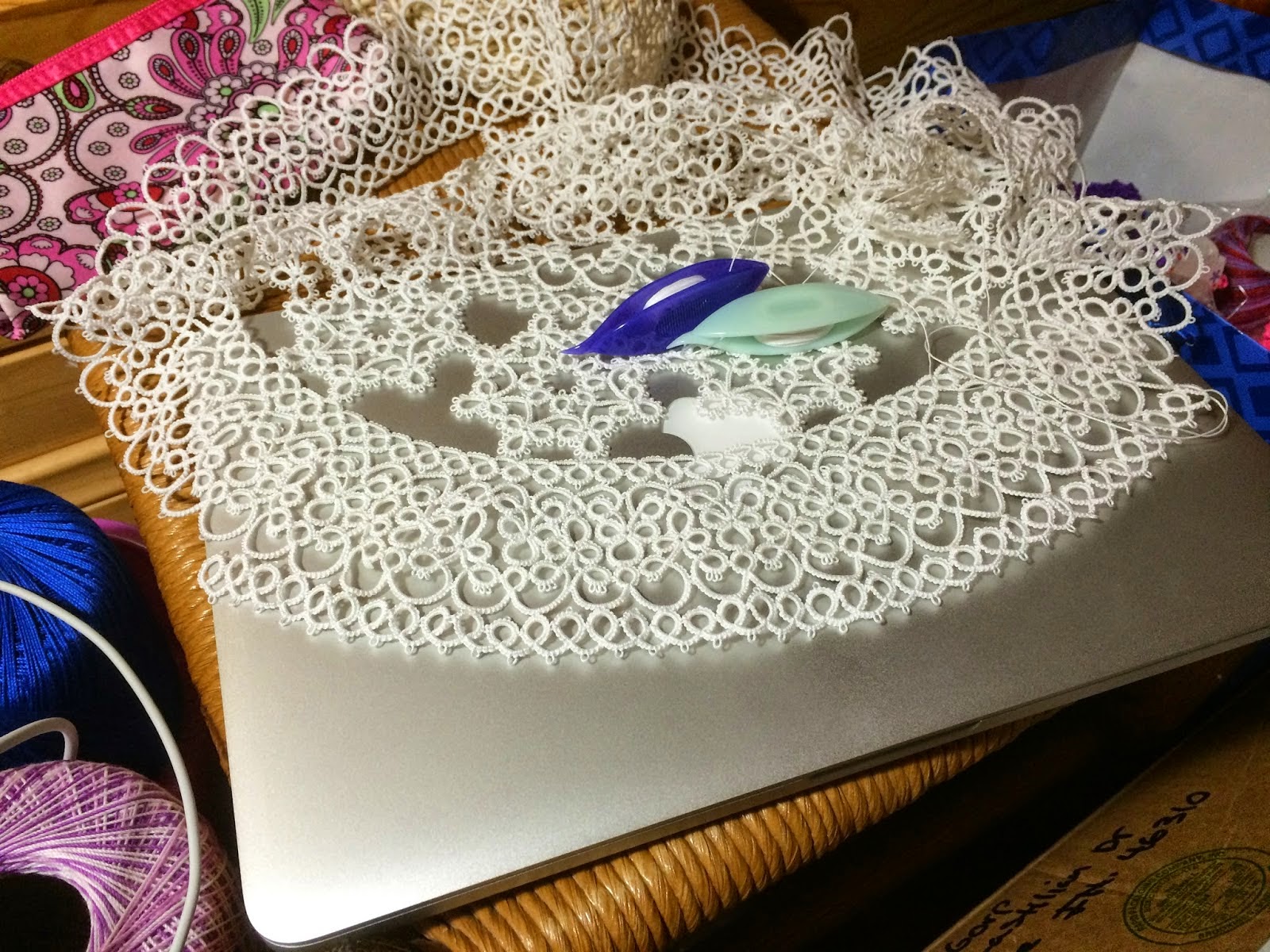 Fox has found these lozenge shaped motifs have driven her crazy, but they are pretty and the doily is taking shape. Now for the second round on these insane making lozenges and she hopes she has enough thread. To give her sanity a break she pulled out Jon's book of covered rings and some size 80 thread which she doubled to give her something close to a size 30 and added some teal beads. 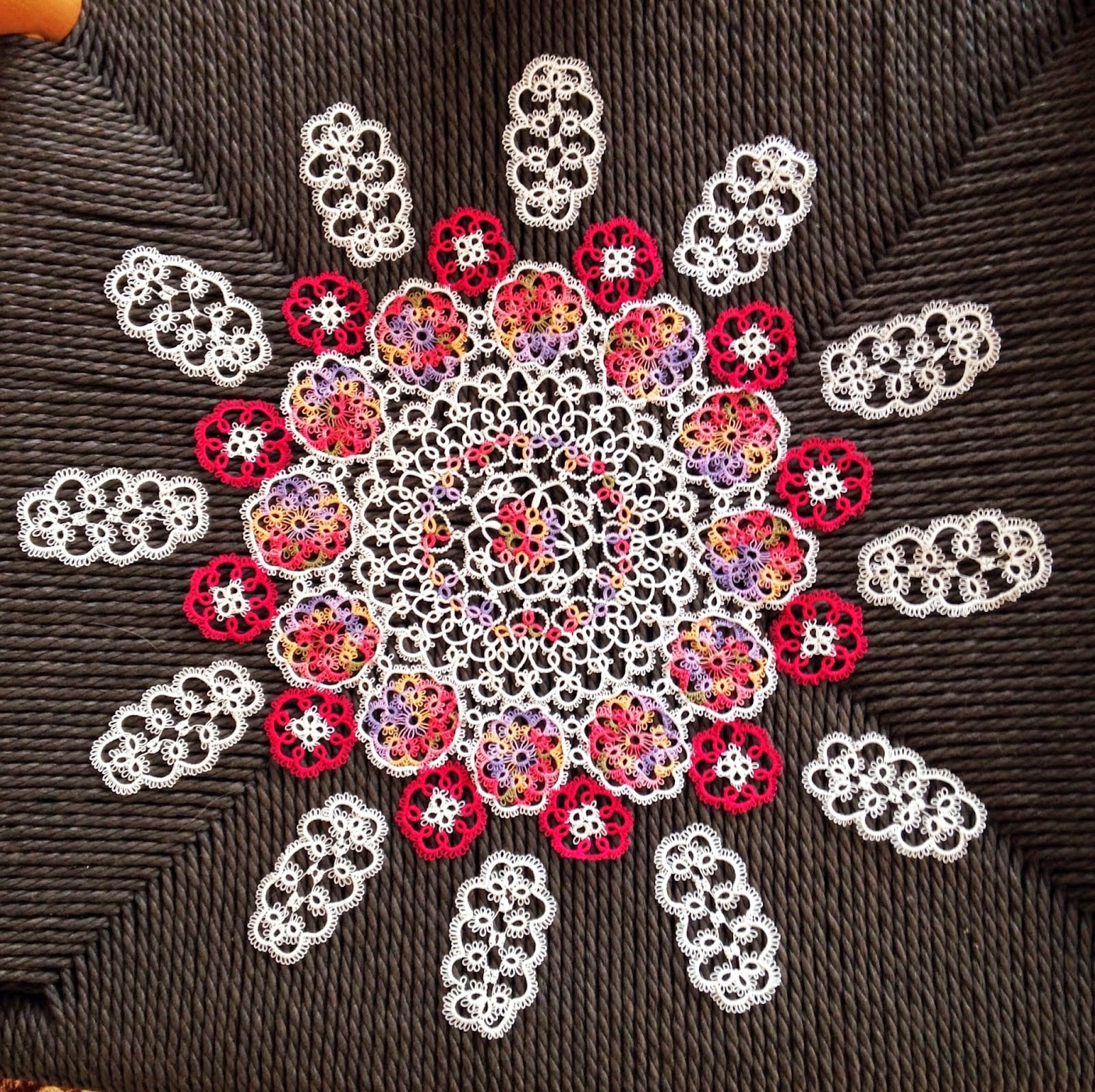 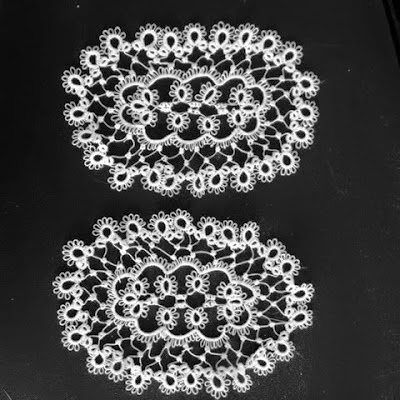 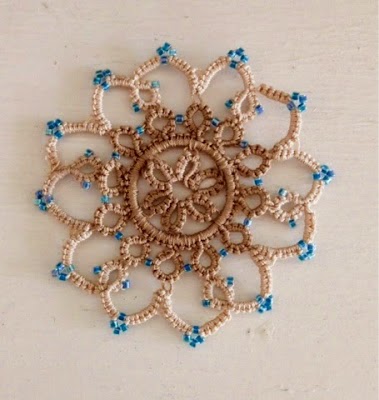 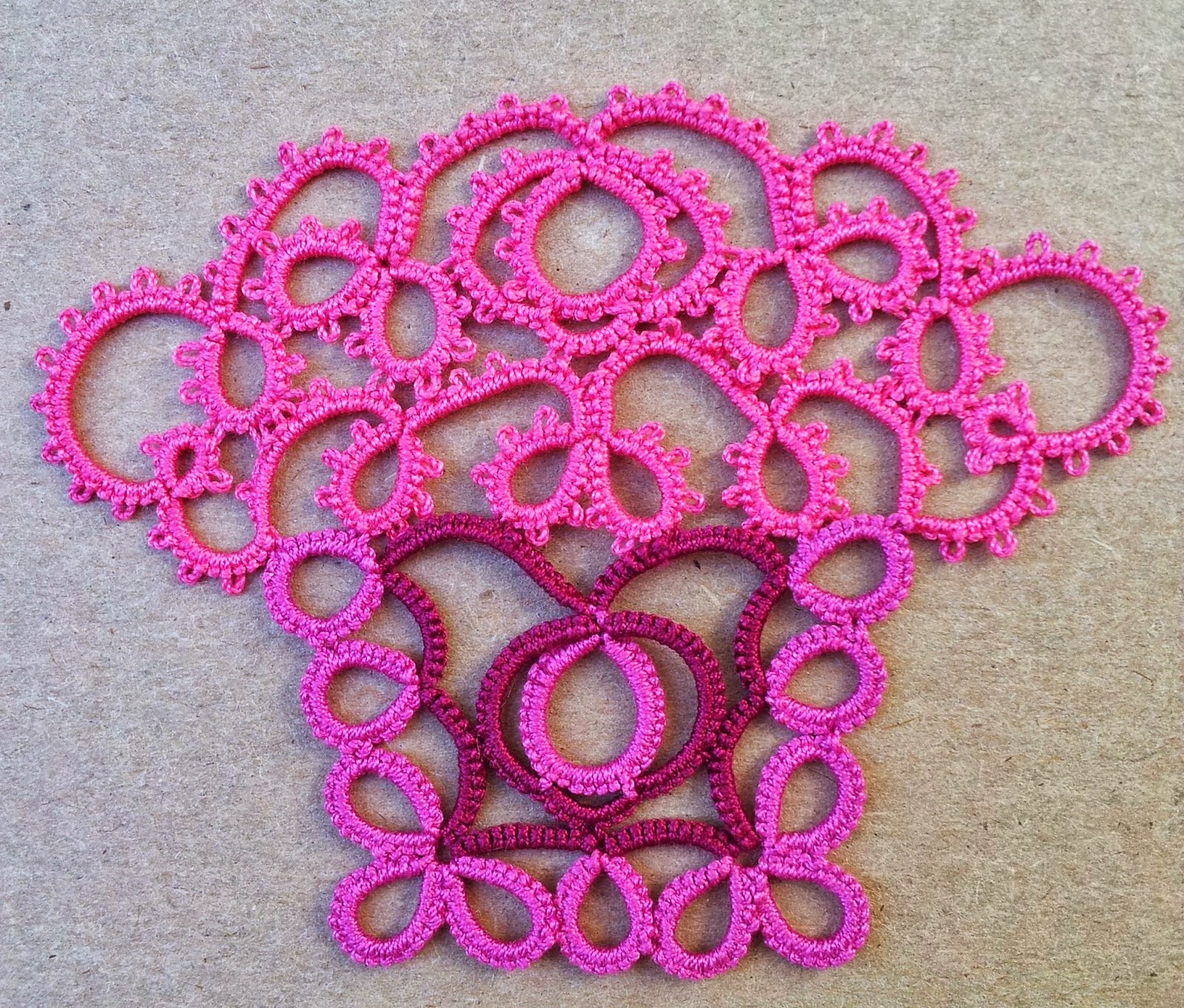 Lilas made these earrings and bracelet for a wedding whose colour theme was blue. Aren't they lovely?

Margaret and Suzanne are doing a Pinterest challenge following a pattern from Tatting Patterns by Mary Konior. She used Lizbeth thread no 20 in white and an organza bag for the inside. She started the bottom with a ring and then worked it round until she had the size of the bag and now that it's done she's making a couple more. 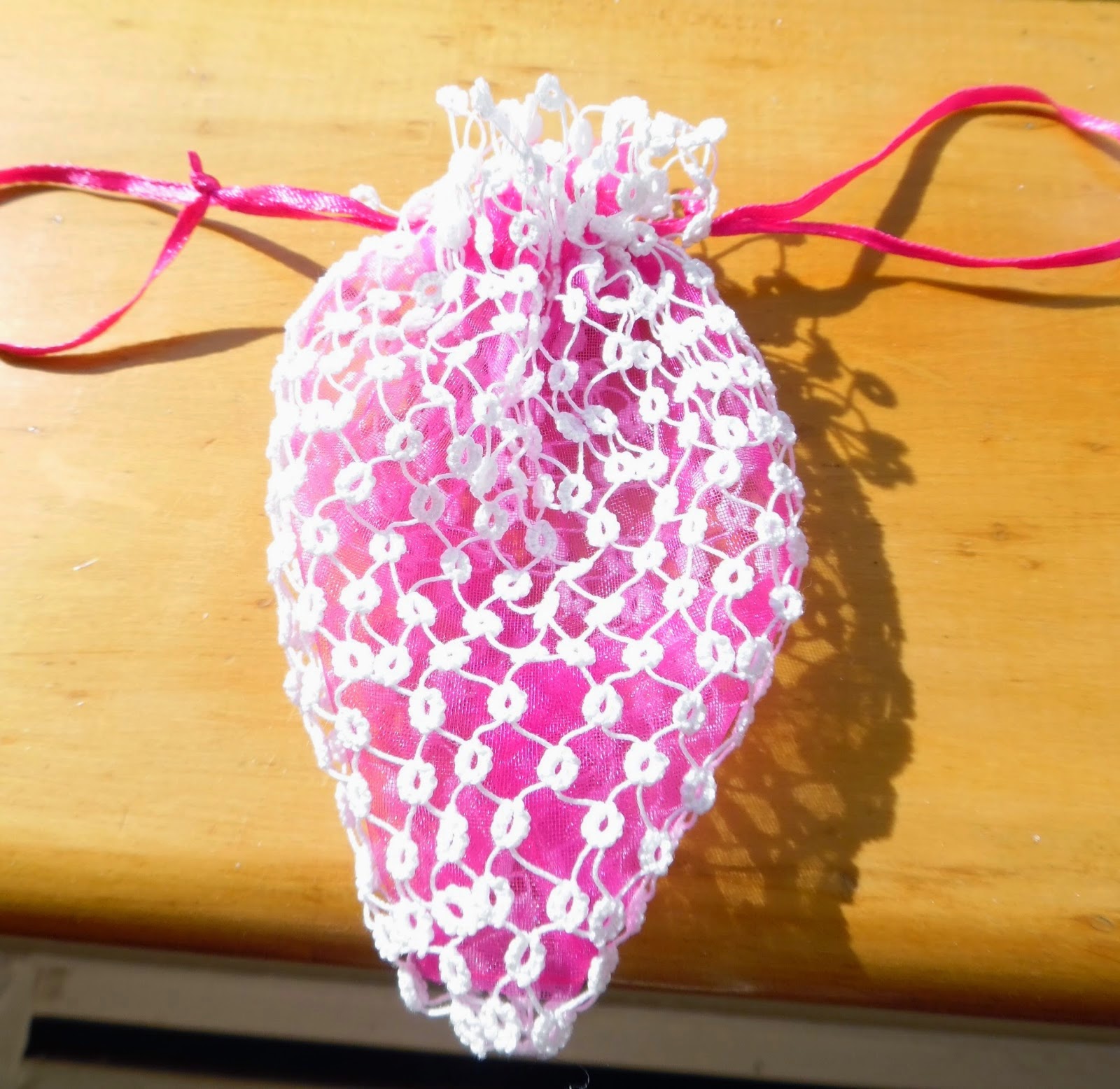 Marie used up the thread on some shuttle to make this doodle bookmark. The doily has two more rounds to go. The bookmark is for her niece's birthday and since she just transferred schools and a Lion bookmark celebrating the Lin Mar Lions seemed appropriate. 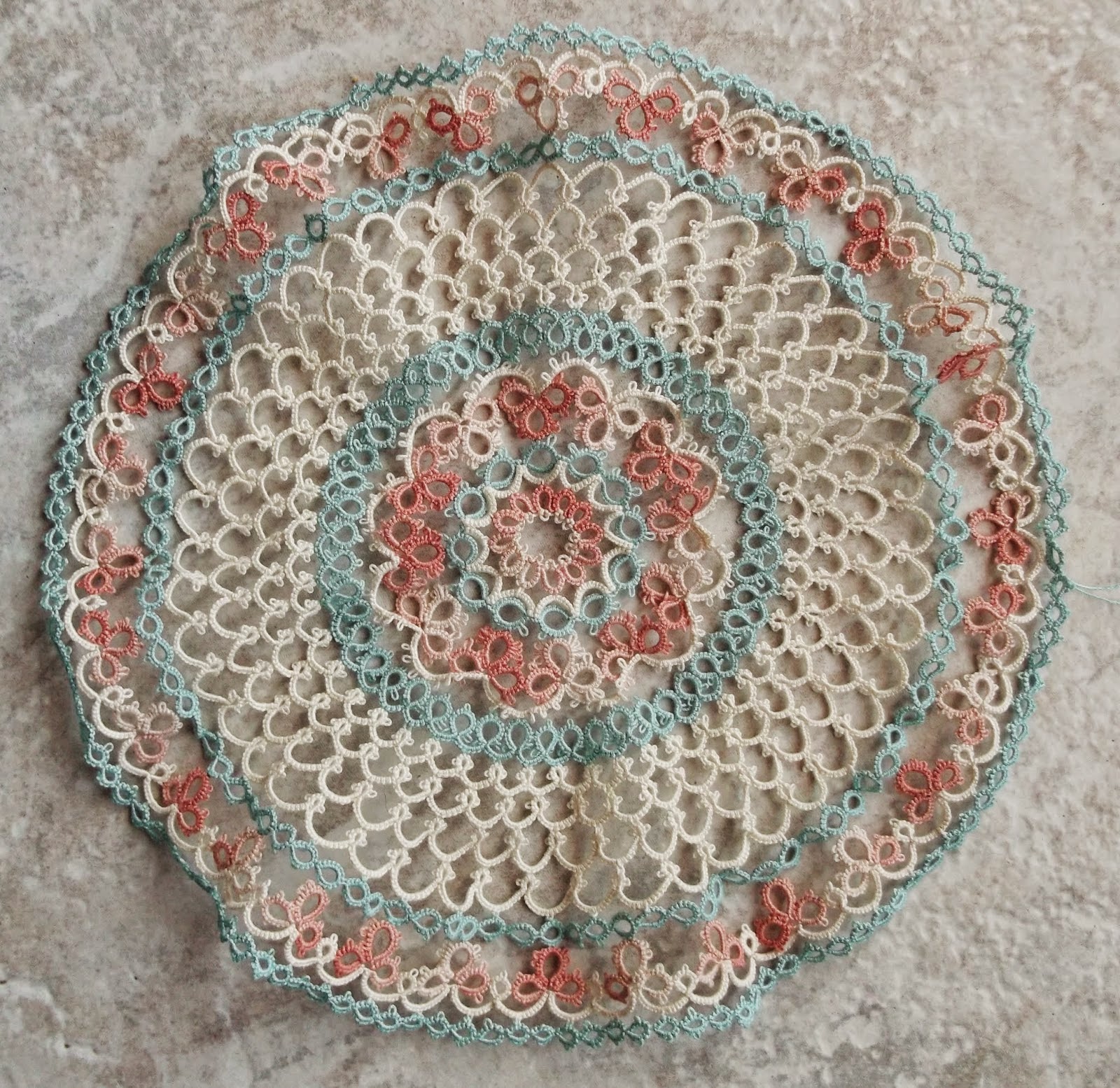 Sue is working on her triangle cross design, but it's stalled at the moment. She has 2 variations in progress just trying things out. On the left hand side is one of Elaine P. Gan's crosses named Hope from  her new book tatted (incorrectly somehow), in Yarnplayer's Adventurer HDT size 40. To the right side of the picture, she made a tiny bit more progress on Robin Perfetti's cross, although, in this cross part of the thread snapped. 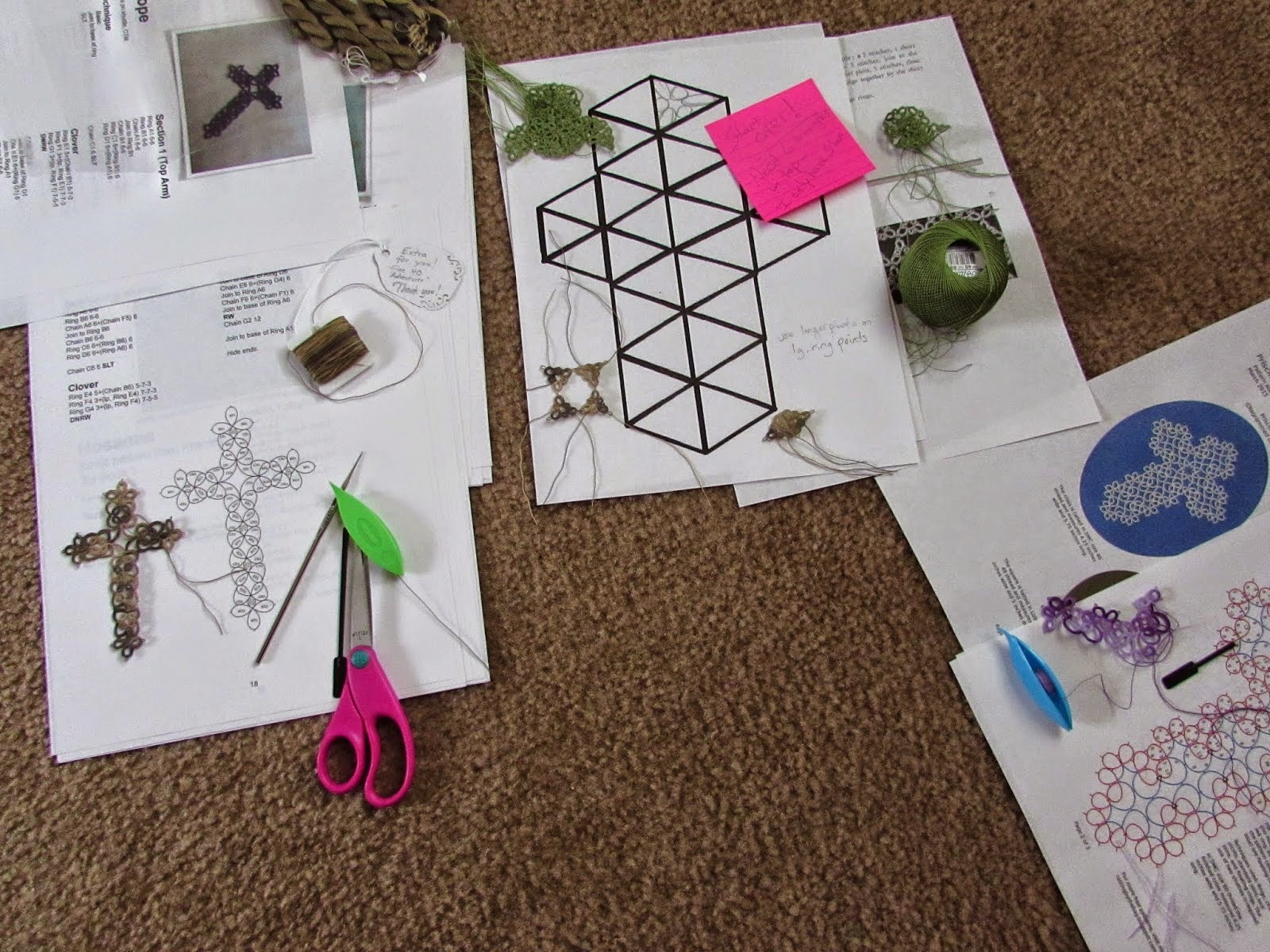