Batty Tatter has joined the challenge and has just finished off her TIAS with a flag at the top of the mast. She's on a rocking horse kick at the moment, her last one having been bought, she's eagerly awaiting some size 40 Lizbeth thread to make more. 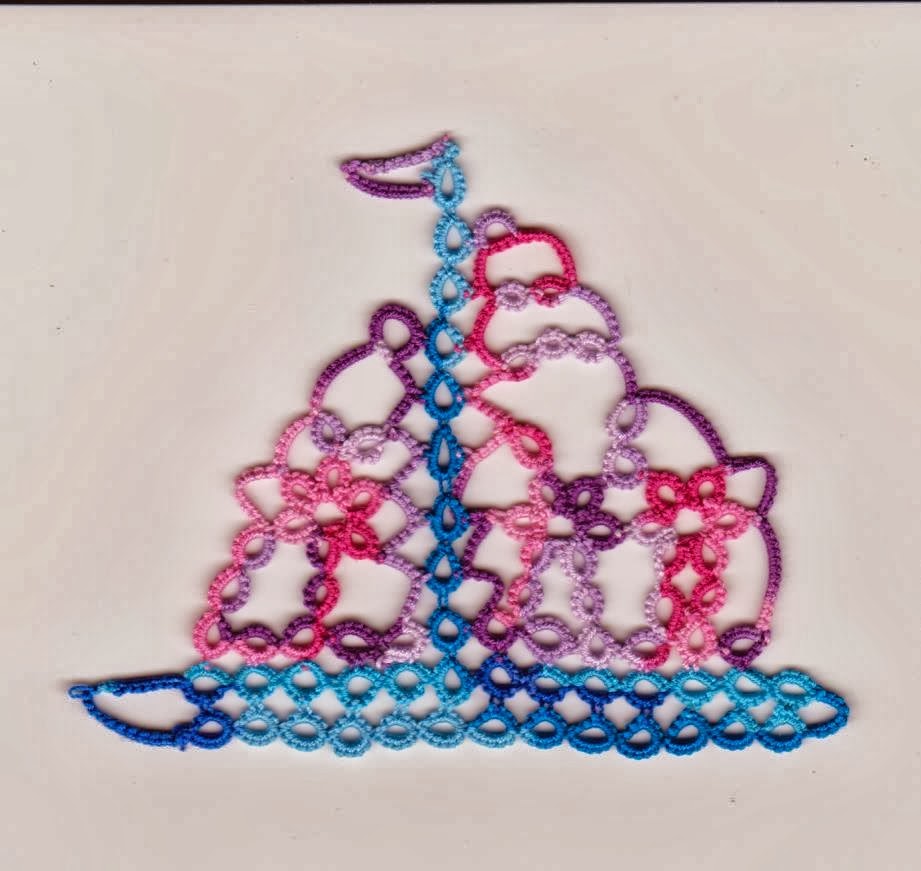 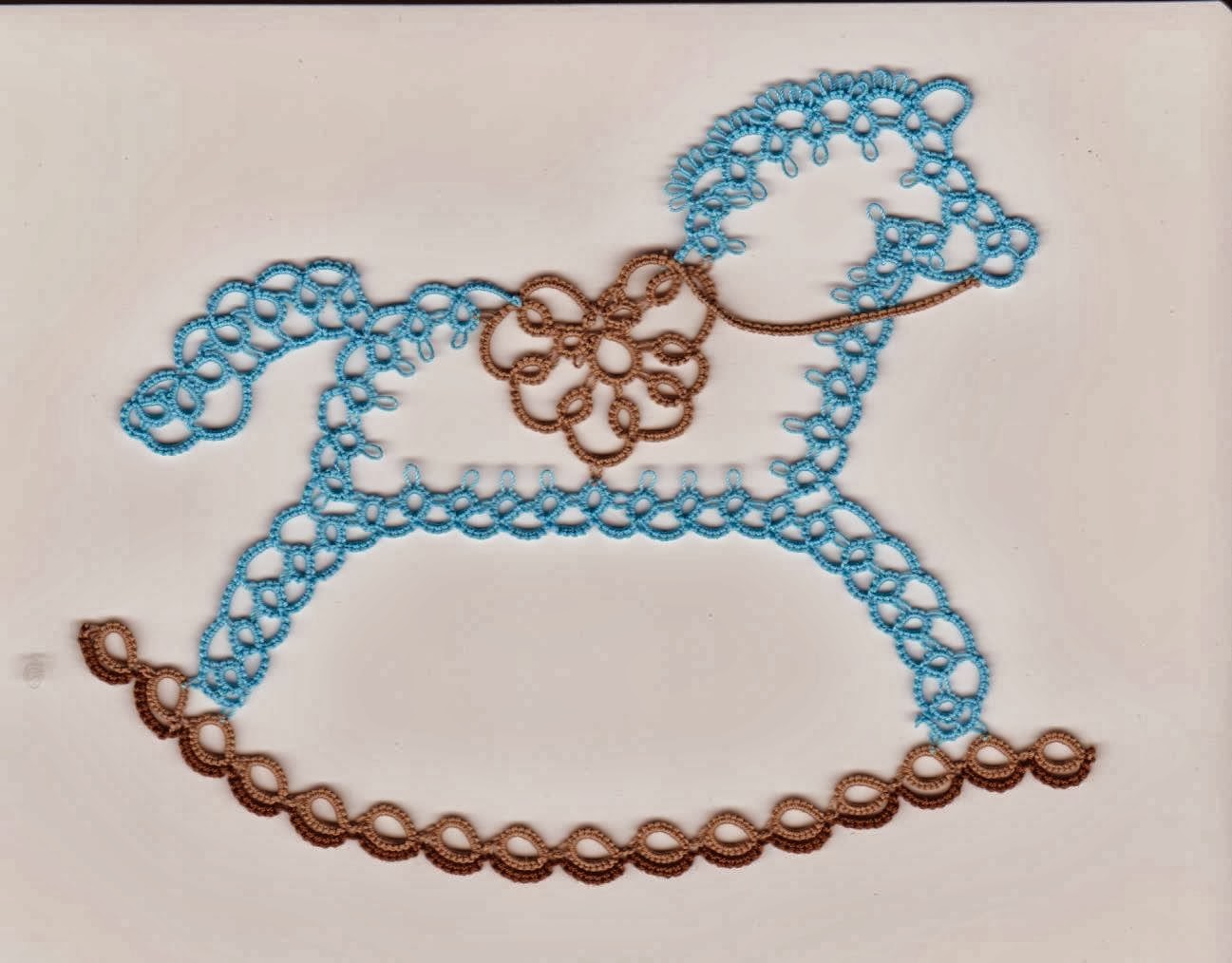 Stephanie is using DMC 80 ecru and Sulky Blendables #12-wt teal variegated for this doily designed by Jan Stawasz. She was sure a full 5-gram ball of DMC would be plenty, but she was wrong, and had to dig through all her small thread stashes to find a last ball of DMC ecru. 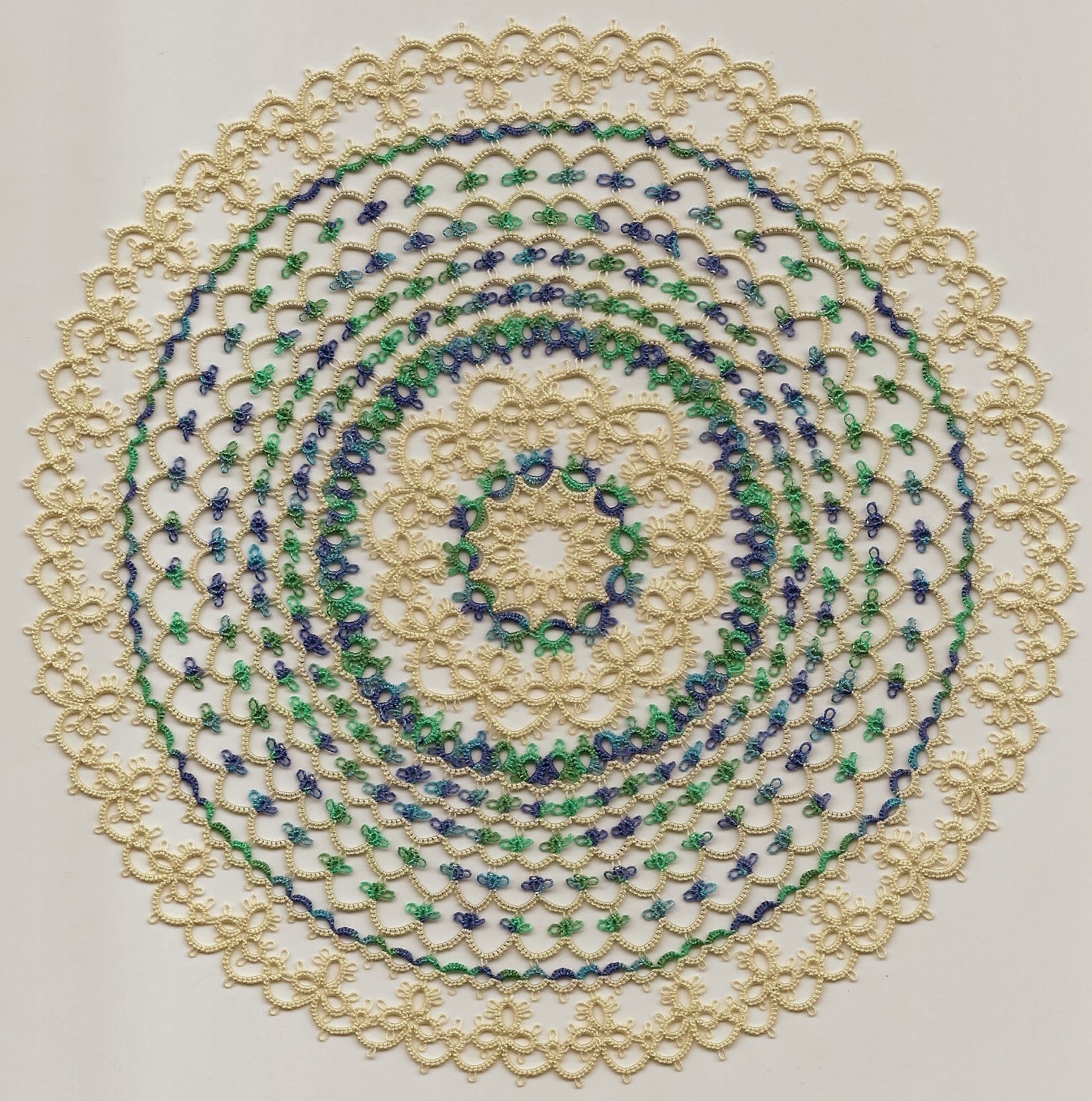 Sue has named her ship Humber Ella and it gets along very well with her dragon named McVroom. These earrings are made with Tropical Punch by Lizbeth and a mid pink Coats from her stash, and beads are Gutermann size 9 seed beads. This pair she made last year were done in what she thinks is Rainbow Taffy and a Coats thread she was given. 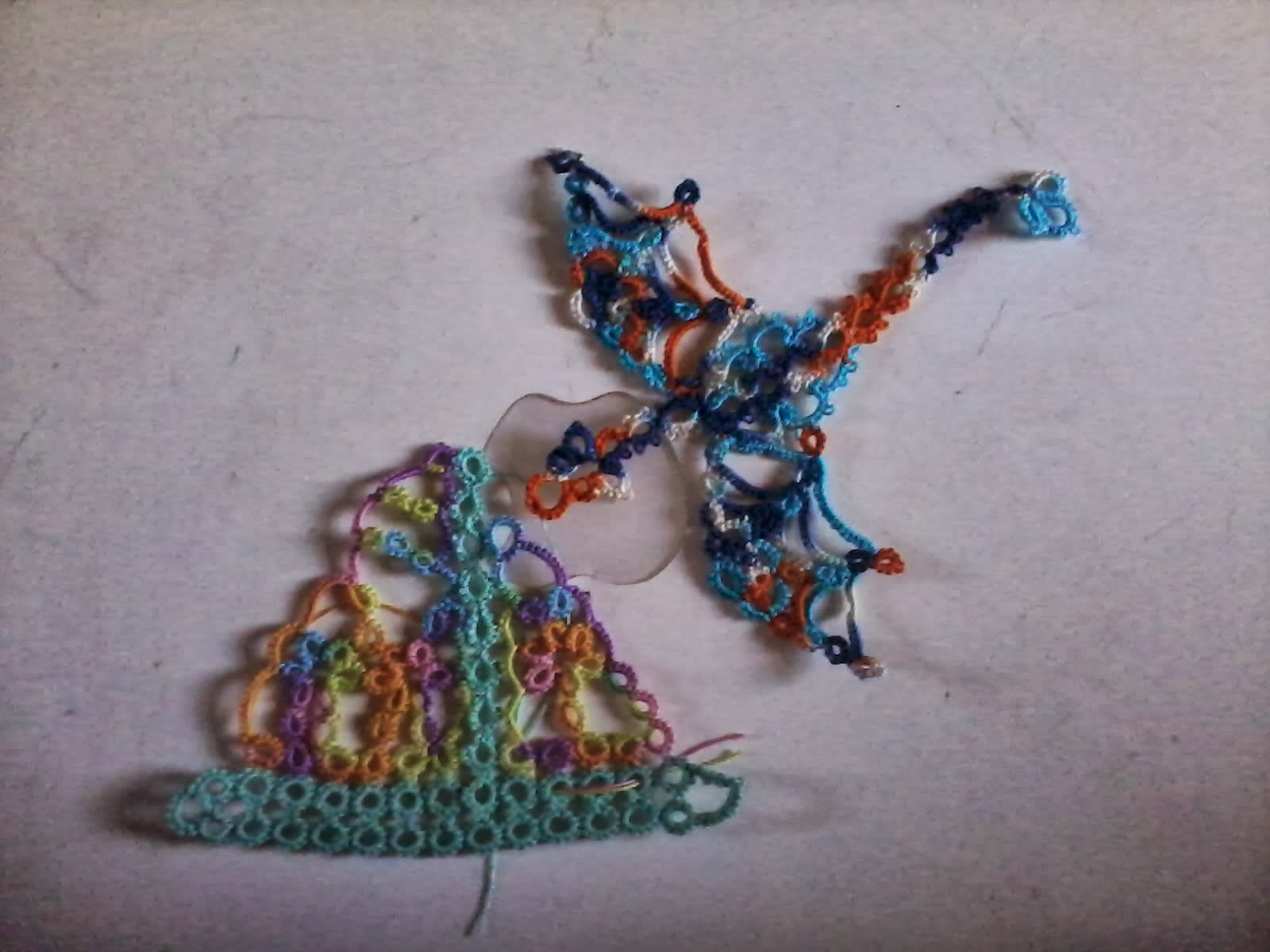 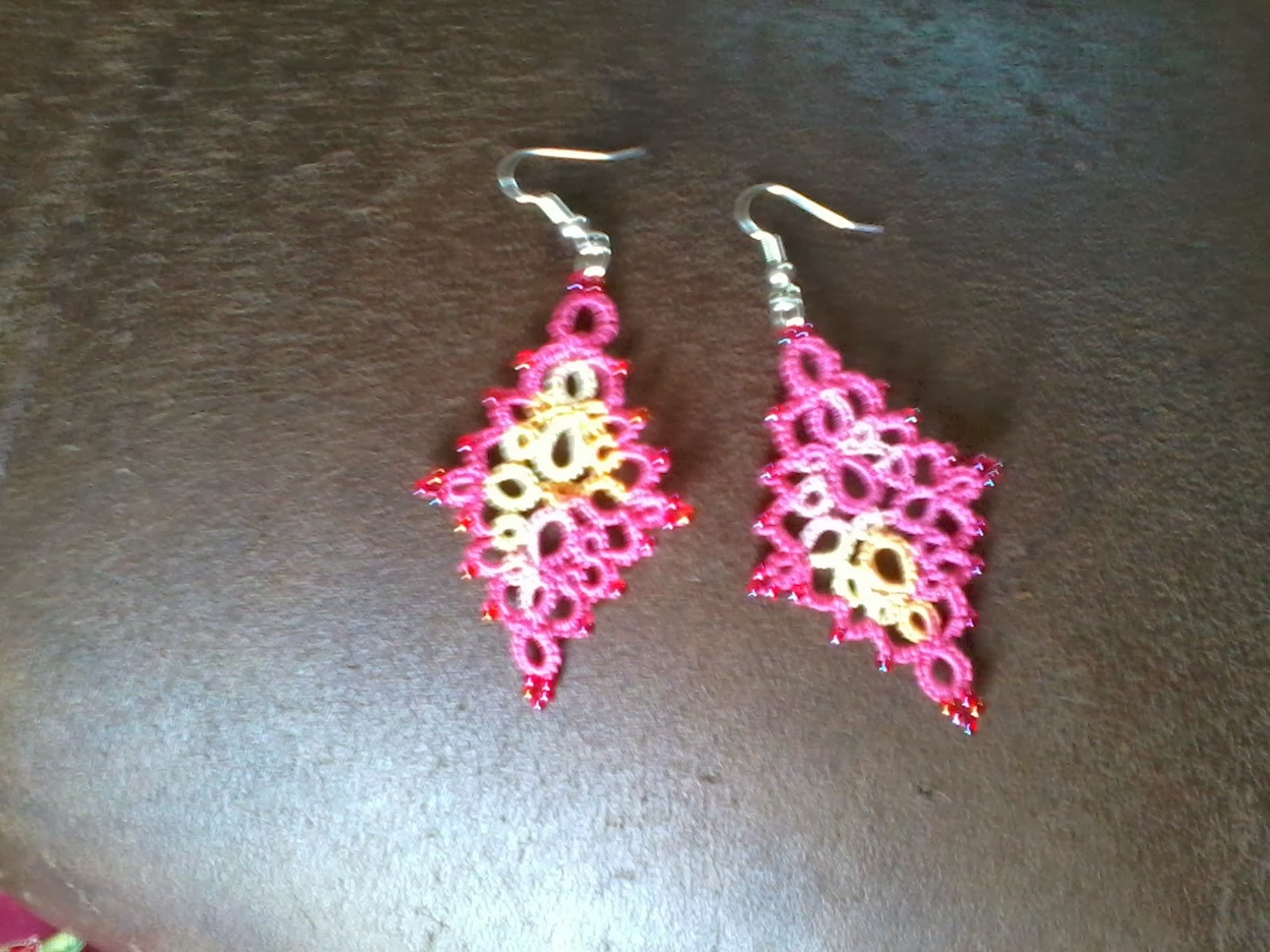 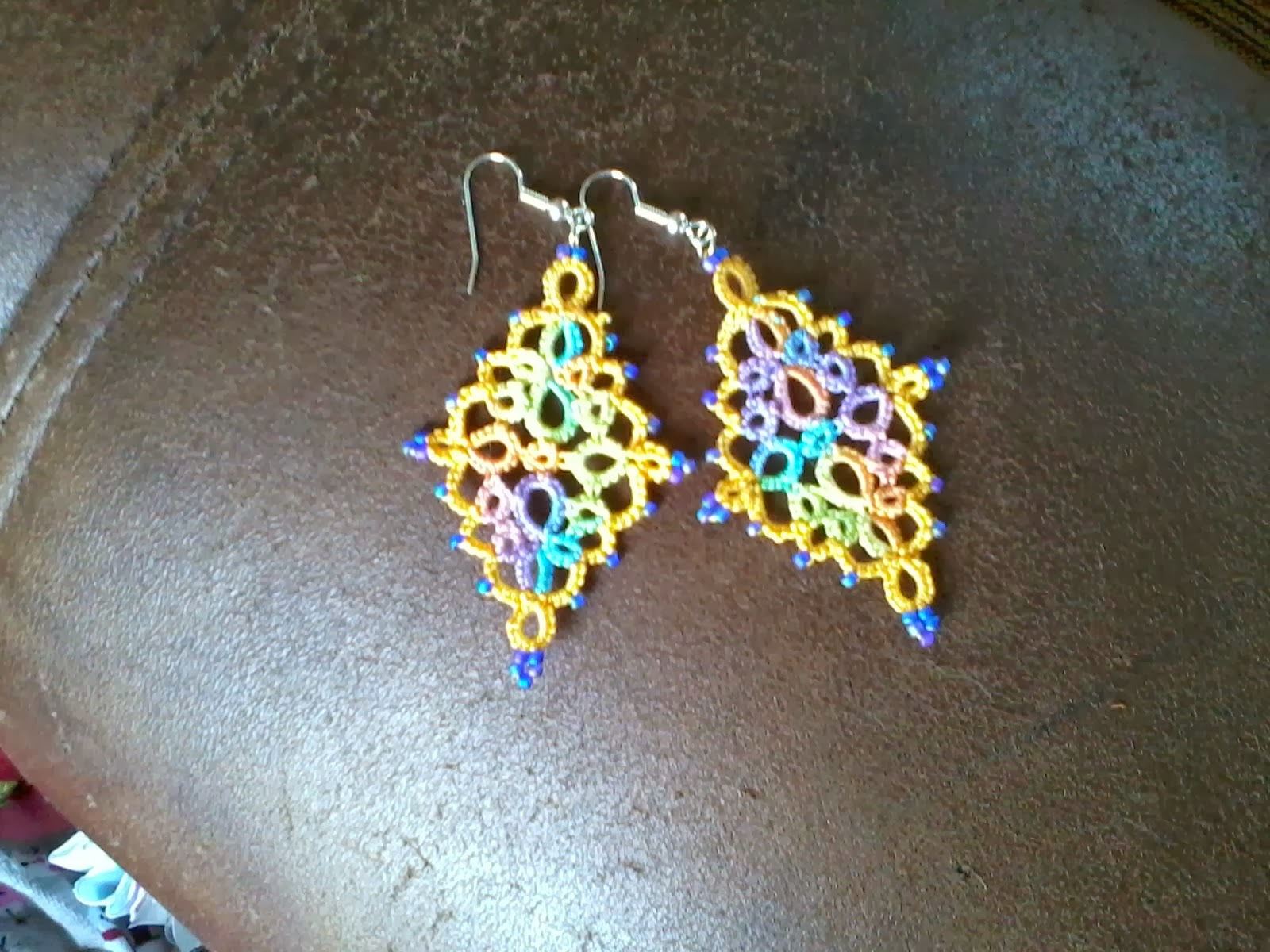 Phyllis dyed some thread to tat a couple of Prostate Awareness Ribbons for a friend. This particular ribbon color is done in sky blue using a pattern from Lenore English. She forgot where to change colours so her sailboat is camouflaged for sailing the high seas in  thread from Yarnplayer, size 20, Peaches 'n Onions. 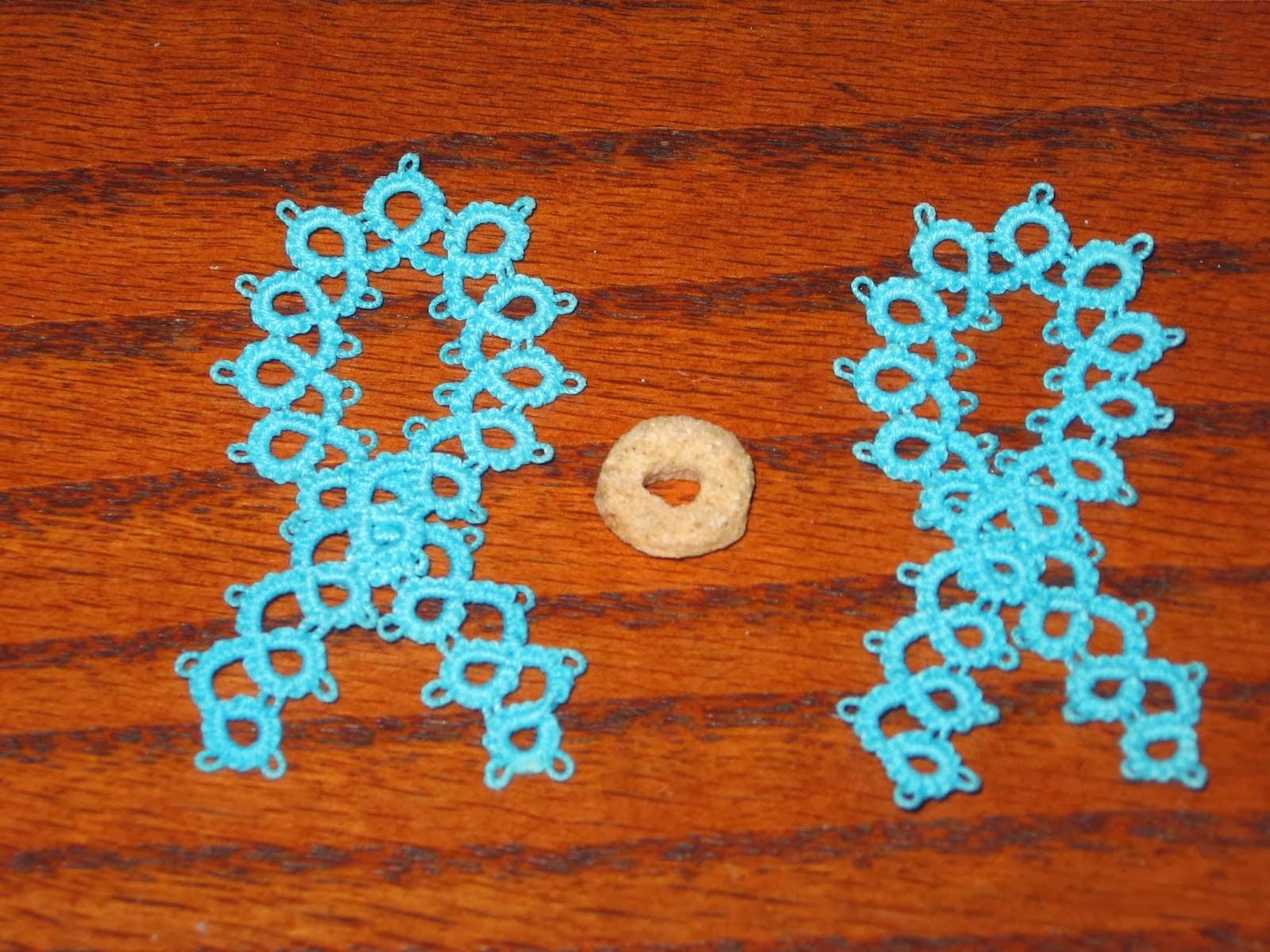 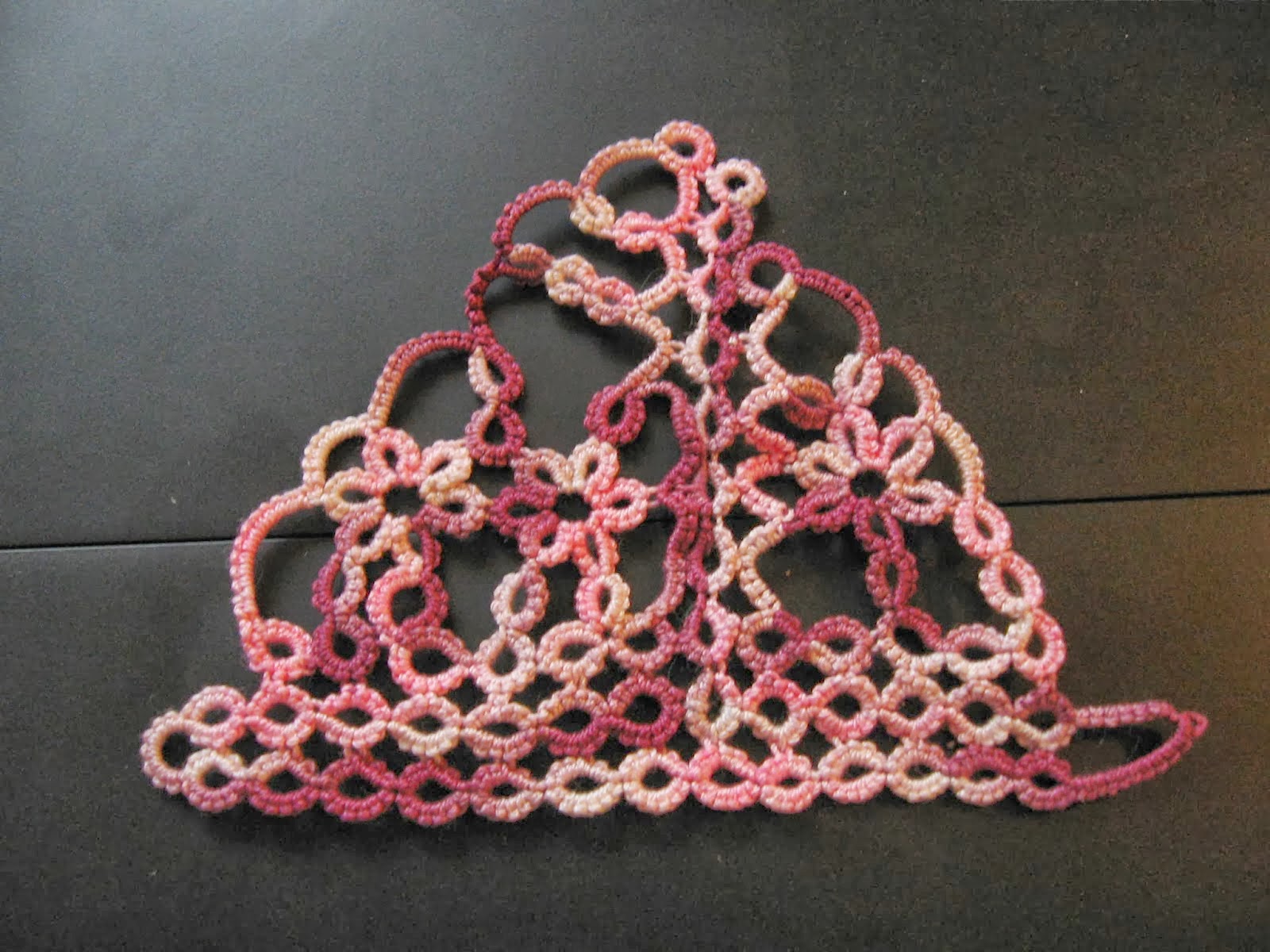 Lelia made A Tat Different, designed by Betty Alderson of Snowgoose and featured in The NeedleWorker Magazine, Spring 1999, in Lizbeth Size 20, off white and Marilee Rockley's HDT. 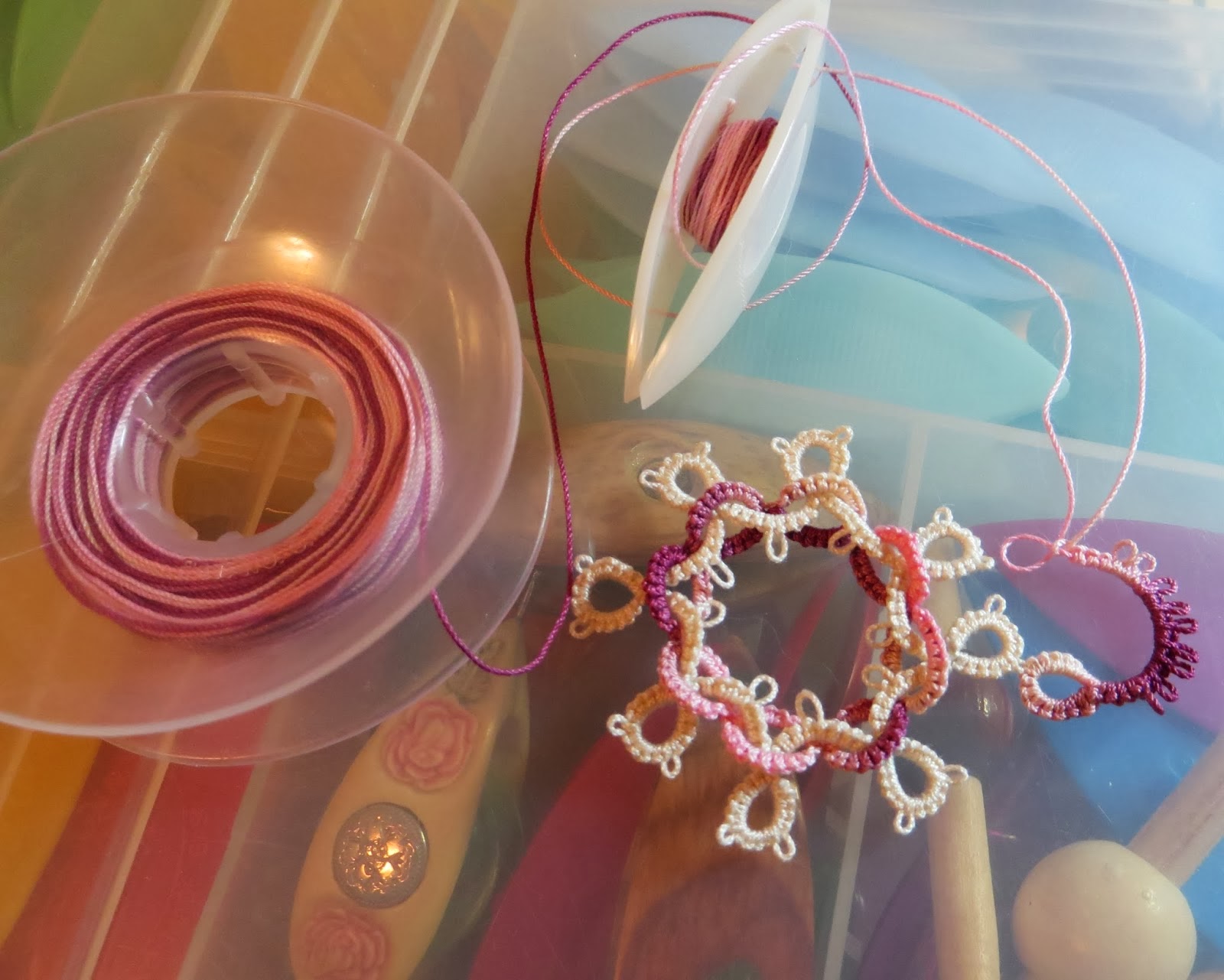 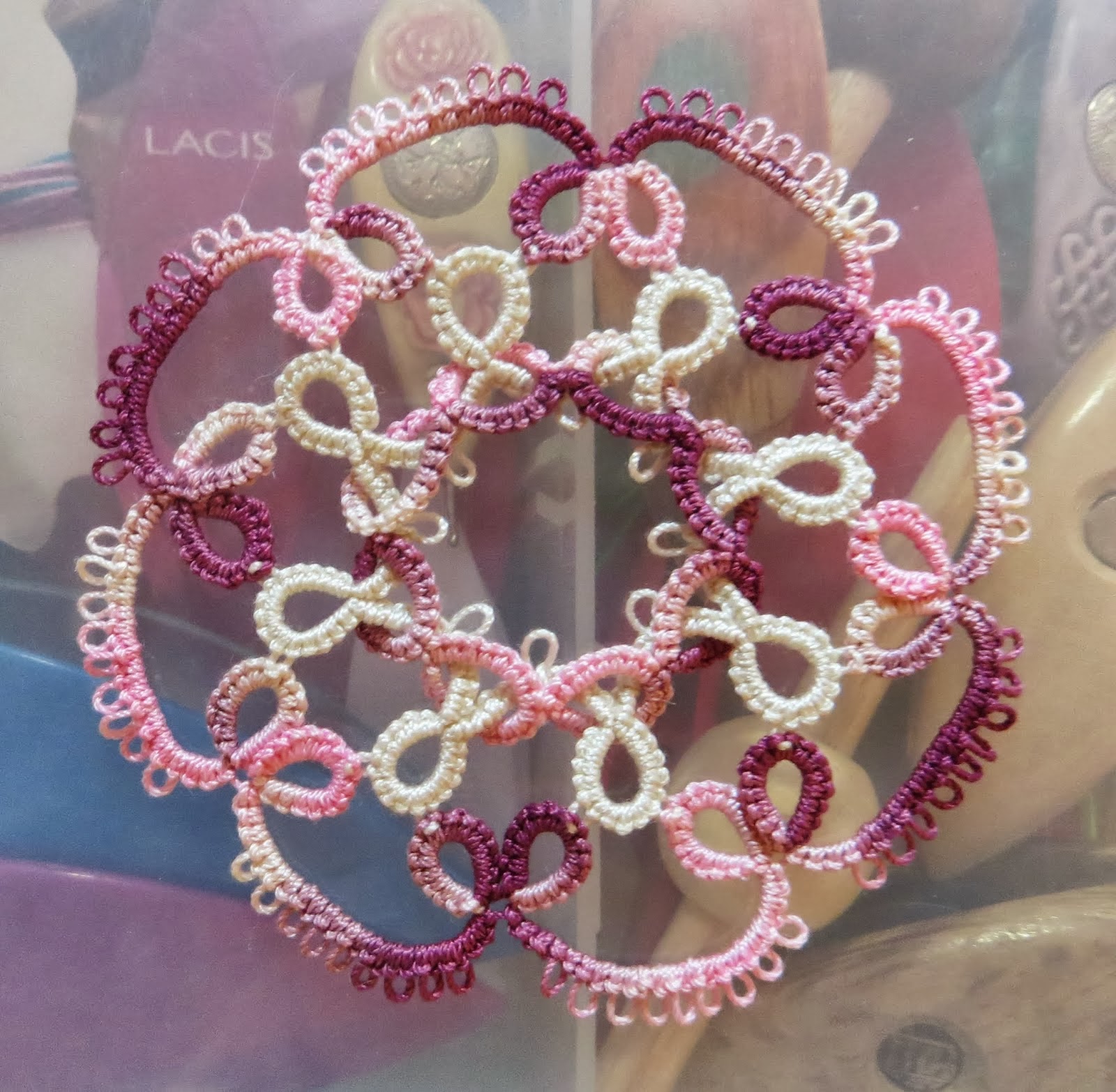 Diane's third graders are doing well with their "Fancy Pants" which is the name of a book by Donna Edwards where she shows that a doublestitch is like a pair of pants with 2 legs and a waist. After chains full of Fancy Pants they are ready to move on to rings and choosing pieces of lace as rewards for their efforts is keeping them enthused. They're finding out that even simple chains can be put to use. Diane played with some pink Flora, making the heart from a Handy Hands pattern. The piece on the right is Hope from Tatting with Visual Patterns by Mary Konior. The bottom piece is a fragment of Hope. Here is Posy from Tatting with Visual Patterns by Mary Konior. The fragments were practice pieces before tatting the motif which she likes to do using up left over thread on the shuttle. Her third graders have attracted the interest of some 5th graders and they're using the minutes after they finish their lessons to work on tatting. You'll never guess what Diane is working on. It's another Spinning Wheel Glass Mat in the pink Flora thread. 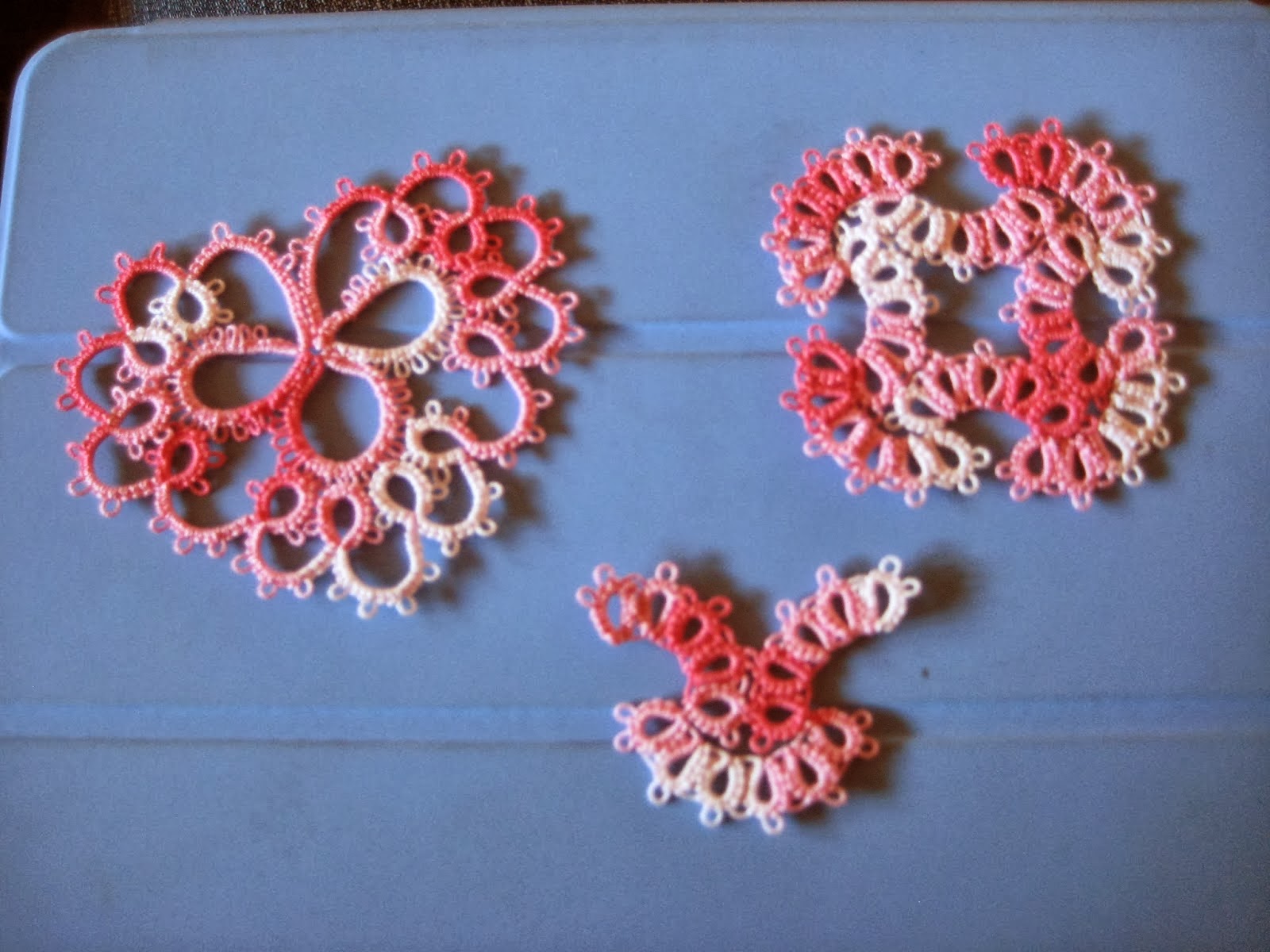 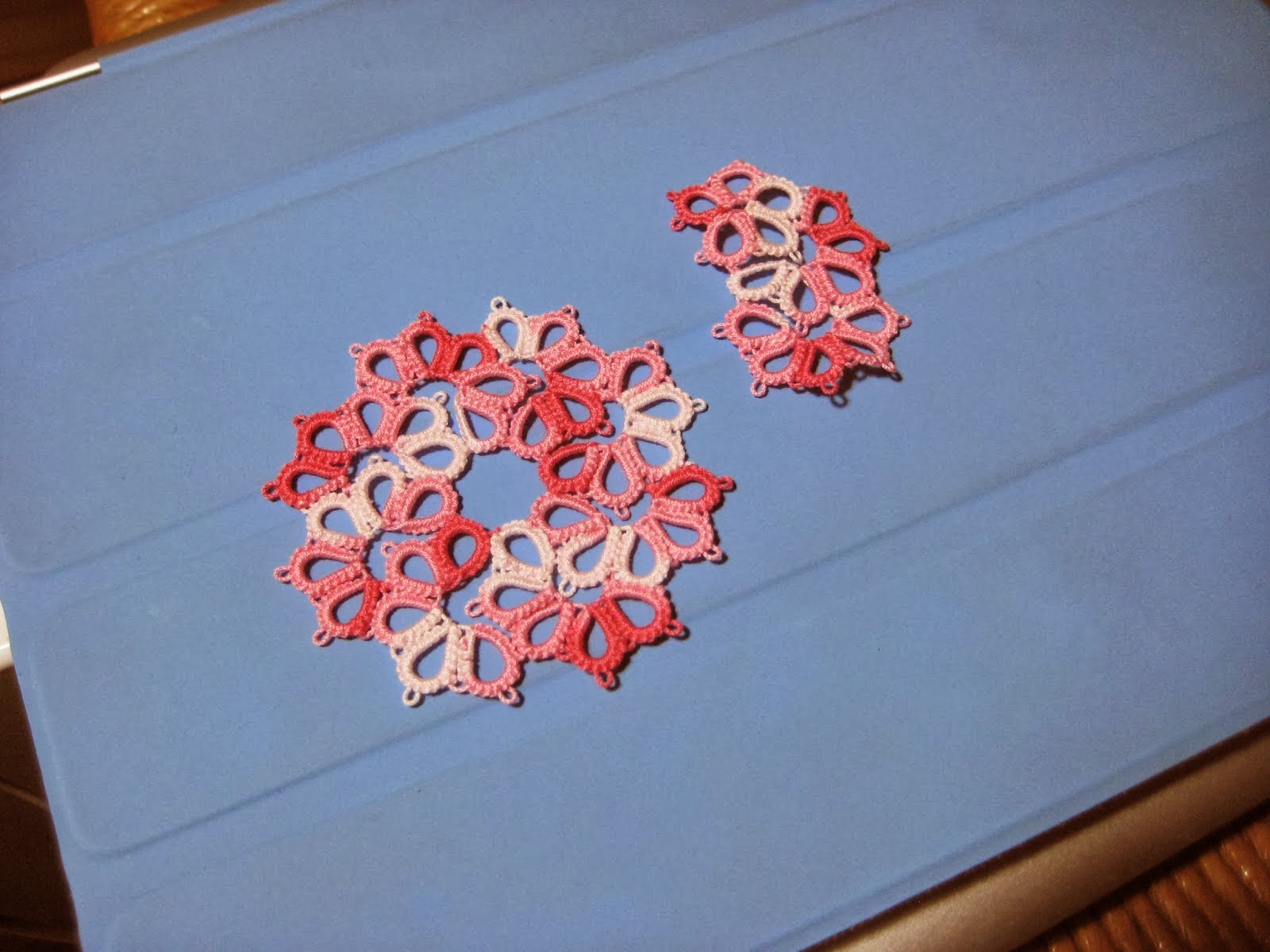 Fox noticed that there was something different between her doily and the one pictured, then she realized that she had only 5 picots instead of 6 on the last row. Rather that cut off the whole row, she just cut off the last bit she had done and modified the pattern to fit. She actually likes it better this way so it was a serendipitous mistake. With all those teeny tiny beads, this row will be taking a while. 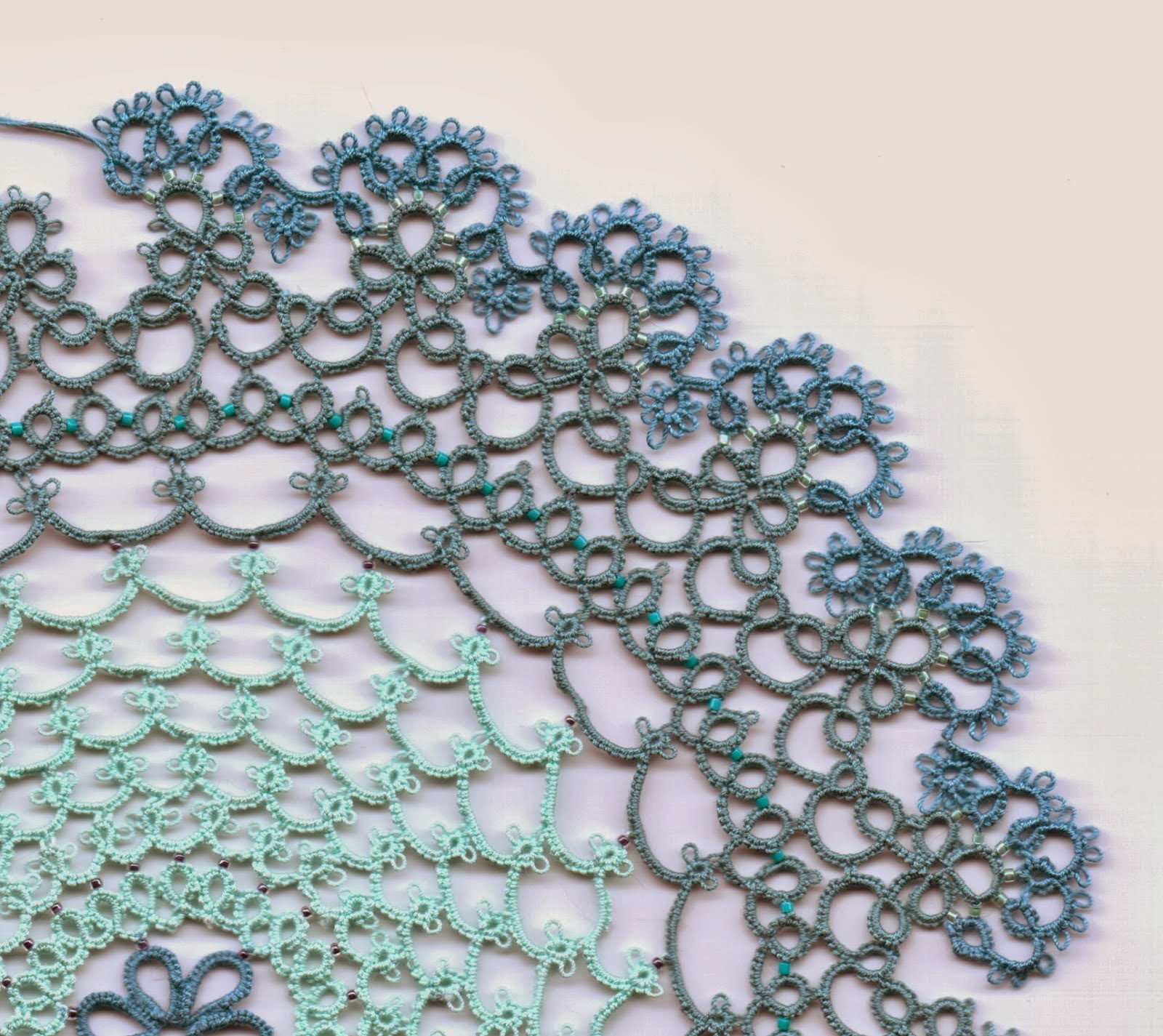 Wanda chose Lizbeth size 20 # 130 Island Breeze and # 657 Ocean Turquoise Dark for her TIAS project, which turned out to be perfect colours for the subject. This is the progress on the centre back of her vest which she started in April of 2013, finished the collar and then put it aside until recently.